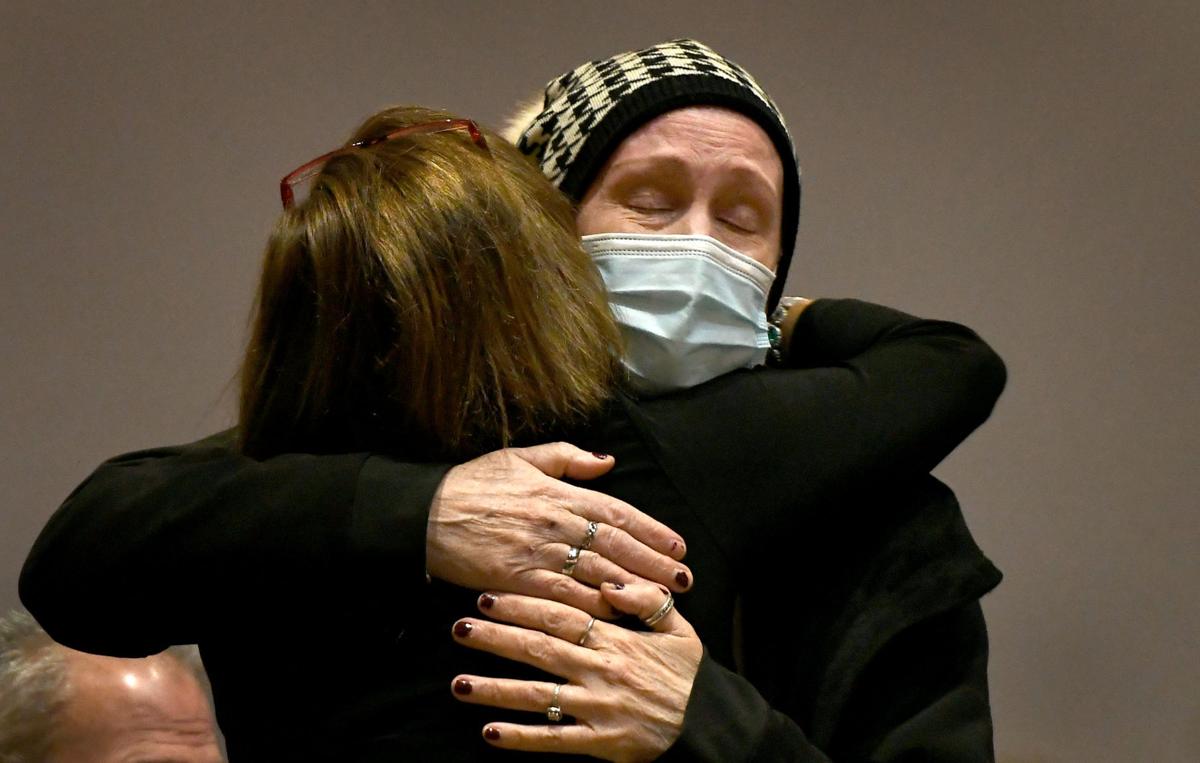 Kelly Dare, right, hugs Lynette Wilson during the funeral service for Wilson's father, Richard "Dick" Howard, at Sacred Heart Church on Saturday. Howard died at the The Commons on St. Anthony in December, less than 24 hours after testing positive for COVID-19. 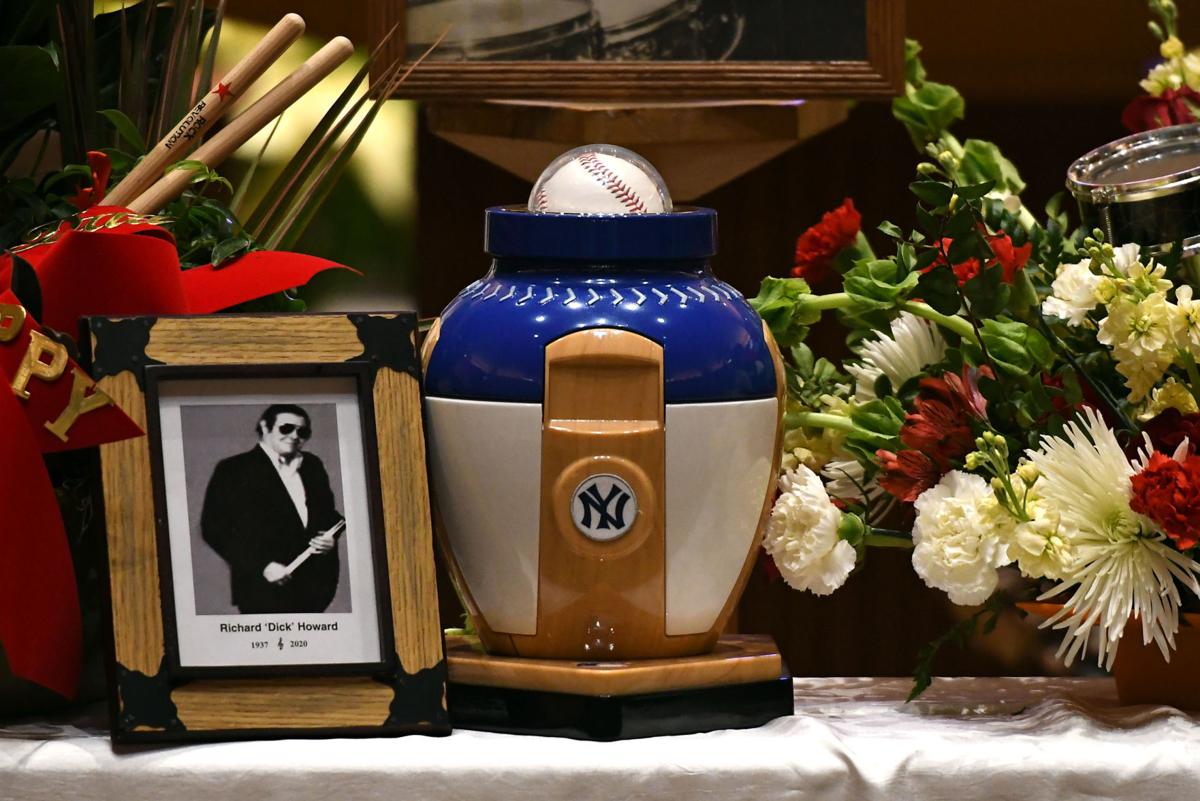 The cremated remains of Richard "Dick" Howard, a diehard New York Yankees fan, rest in a Yankees urn during his funeral at Sacred Heart Church on Saturday.

The life of Richard "Dick" Howard was loud.

Now, the family of the beloved Auburn drummer is coping with the fact that his death was so quiet.

Due to the state's ban on nursing home visitation during the pandemic, his family couldn't be with him during his final hours.

His daughters, Julie Howard and Lynette Wilson, told The Citizen that they tried to reach him after his diagnosis. But the facility was too busy responding to the outbreak of the virus there to arrange a call that day. The last time they talked to their father was his birthday, Dec. 14, through FaceTime. The last time they saw him in person was before the pandemic began in the U.S. in March.

That's why Wilson has some advice for anyone who, like her, learns that a loved one in a nursing home has tested positive for COVID-19.

"Make sure you talk to them immediately," she said. "That's the saddest thing, is that we couldn't say goodbye or be with him. People say he didn't die alone. But to us, he did."

Wilson said there will be no autopsy on her father, so his exact cause of death will remain unknown. He had underlying conditions: diabetes, congestive heart failure, chronic obstructive pulmonary disease. But she and Julie were still able to talk to him weeks ago. He was sad, his eyes visibly tearful even through the pixels of their video call, after months apart from his family. But he was there.

The Commons nurse who called at 9 a.m. Dec. 28 to deliver the news of his positive test was tearful as well.

Wilson immediately realized it was "a death sentence" for her father, she said — one he almost avoided, having just received the first of the two shots required to vaccinate him against the virus.

She spoke with nurses at the facility three more times that day. They said Howard was doing well. But when they checked on him at 2:40 the next morning, he was gone.

He is survived by his daughters and two sons, Jeffrey and Richard, the latter a drummer and teacher just like his namesake. They gave their father five grandchildren and two great-grandchildren.

Wilson knows his death was almost as difficult for the facility's staff as it was for his family. Howard lived there for four years.

"They took really good care of him, and loved him," she said. "We really want to thank them. We feel bad for them right now."

Also grieving Howard is the music community in Auburn.

Julie Howard, who followed in his artistic footsteps with a career as a singer and teacher, said the outpouring of love from her father's bandmates, students and more has eased the pain of losing him.

"Everybody had the same exact thing to say," she said. "He smiled all the time and was the easiest musician to work with."

Among the musicians paying tribute to Howard since his passing was Bob Piorun. The longtime Auburn guitarist and teacher was a high school freshman when he first met Howard in 1961.

By then, Howard had studied at the Berklee College of Music in Boston and returned to his hometown to teach drums at The Auburn Music Store on East Genesee Street. He would later form The Music Mart with fellow performer Frank Borza, teaching there and at Speno Music, before moving his noisy classroom to the Auburn Musician on Grant Avenue from 1976 until his retirement.

Soon after meeting Howard, Piorun began accompanying him to a Syracuse club, the Intrigue Room. The young guitarist sat in the audience and studied Howard behind the kit for five hours a night.

"He was the personification of the cool jazz guy," Piorun told The Citizen. "To me and my generation, he was our musical inspiration. He was so enthusiastic about music, it spilled over to you."

Piorun eventually went from pupil to peer, joining Howard in bands like Cloudburst and Breezin'. Their jazz gig at the Springside Inn lasted from 1988 to 2002. In all, they probably played 1,000 shows together, Piorun said. But he and Howard also became close friends. Before they began teaching students, they spent their mornings getting breakfast together, singing notes over the table to warm up.

The other musicians Howard played and recorded with over his six-decade career "are too numerous to list," his family wrote in his obituary. They include Chuck "Rubber Legs" Hayden and the Rockin' Esquires in the '50s, the Herb Nelson Trio in the '60s and the Butch Strong Duo in the '70s. In the '80s, he toured with Richard Nader's Rock and Roll Revival, a showcase that featured Chuck Berry, Ricky Nelson, The Shirelles and more at venues like Madison Square Garden. One reason his resume is so varied is because he could play just about any genre of music, Julie Howard said of her father.

"He could go from a country beat to a rock beat to jazz," she said.

Howard always played for the song, Auburn guitarist Mark Doyle added. He wasn't showy, and was sensitive to the needs of the music.

The drummer hired Doyle to teach guitar at the Music Mart when he was 15. It was there that Doyle met his longtime collaborator Joe Whiting, as well as countless others under Howard's tutelage.

That's why Doyle considered him the heart of the Auburn music scene at the time, he told The Citizen.

"He was such a mentor to everybody," he said. "And he was so proud of his students. It was like 'Mr. Holland's Opus.'"

In the '90s, Doyle joined his father, Bobby Doyle, and Howard in The Jazz Minds. The band was scheduled to perform at a morning taping of "All-American Jazz" at WCNY in Syracuse. But Howard, a night owl, didn't trust himself to make it to the studio on time. So he arrived at the parking lot the night before and slept in his car, Doyle said, to the amusement of his bandmates that morning.

Howard would also make Doyle laugh with a shuffle beat that he loved. The drummer flashed a knowing grin that said "I know this is the s---" whenever he played it, Doyle said.

"Every time I played with him he just emanated so much joy," Doyle said. "He loved music and he loved playing."

Howard's family, who said goodbye to him at a socially distanced funeral Saturday, hopes to share his love of playing music by establishing a scholarship fund in his name. The scholarship will be awarded to students in the music program at Auburn High School. To raise funds for it, the family will host a tribute to him. But in order to do that, Julie Howard said, COVID-19 has to be under control.

"It's not a fluke," she said. "Wear a mask and wash your hands so we can get through this."

For nine months, Cayuga County avoided one of the worst aspects of the COVID-19 pandemic: An outbreak in a nursing home.

Kelly Dare, right, hugs Lynette Wilson during the funeral service for Wilson's father, Richard "Dick" Howard, at Sacred Heart Church on Saturday. Howard died at the The Commons on St. Anthony in December, less than 24 hours after testing positive for COVID-19.

The cremated remains of Richard "Dick" Howard, a diehard New York Yankees fan, rest in a Yankees urn during his funeral at Sacred Heart Church on Saturday.