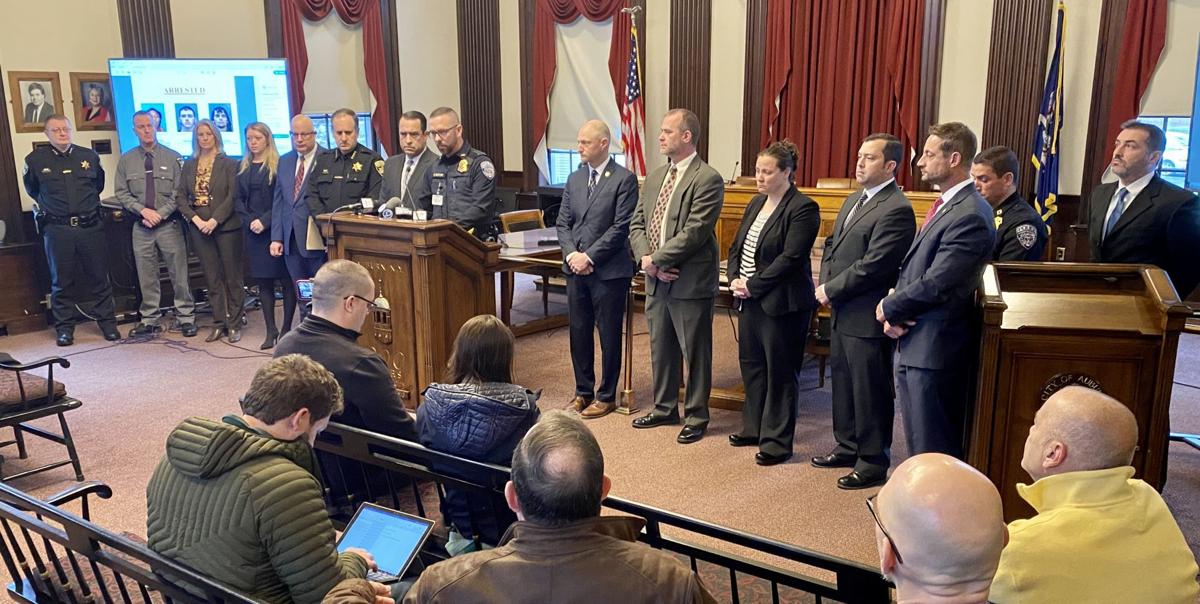 Auburn Police Department Chief Shawn Butler, at podium, leads a press conference Monday to announce that three people have been charged with murder in the shooting death of Joshua Poole on Nov. 15.

Auburn Police Department Chief Shawn Butler has announced the arrests of three people on murder charges in connection with the shooting death of Joshua Poole on Nov. 15:

Butler announced the arrests at a press conference at Auburn City Hall on Monday morning. He said Poole, 36, was killed inside 8 Delevan St. after being shot multiple times. Butler said the case was related to the "scourge of illegal narcotics" in the community.

The vehicle found submerged in the Seneca River near Cross Lake in Jordan on Friday afternoon is believed to be the vehicle that was used to transport the three suspects to and from the scene, Butler said during the conference.

The weapons used in the shooting, a shotgun and a handgun, haven't been found.

The first of what is expected to be multiple defendants in the shooting death of a city resident pleaded not guilty Monday morning to second-degree murder.

Tyree Anglin, 19, was arraigned in Auburn City Court on the murder charge and a first-degree attempted robbery charge in connection with the homicide of Joshua A. Poole, 36, that happened around 2:10 a.m. Nov. 15 at 8 Delevan St., which is on the city's west side just off Genesee Street. On Saturday, Auburn Police Department Chief Shawn Butler said investigators were no longer searching for suspects and that more details would be released at a Monday press conference.

Anglin was also charged with a violation of an unrelated felony probation and will be arraigned on that later today. He was remanded to Wayne County Jail without bail.

The 10 a.m. press conference will include representatives of the law enforcement agencies that have been working with APD on the case: New York State Police, Cayuga County Sheriff's Office, U.S. Marshals Service and Cayuga County District Attorney's Office.

APD has confirmed that the homicide case is connected to at least two other public incidents that took place in the past week: the discovery of a vehicle mostly submerged in the Seneca River in Cato on Friday and a traffic stop on Nov. 15 on Holley Street in Auburn, where a car that had been the subject of a "be on the lookout" alert was stopped and at least one person was taken into custody. Police declined to provide specifics on that situation other than to say it was "related on the peripheral of the (shooting) investigation."

In previous updates, APD had said it was actively following up on "dozens of leads" and awaiting the results of an autopsy investigation by the Onondaga County Medical Examiner's Office.

Officials also are continuing to ask for the public's help. Anyone with information should call (315) 255-4726, email tips to communitywatch@auburnny.gov or send tips to the APD through its Facebook page, facebook.com/auburnnypd. Tipsters may remain anonymous.

The Auburn Police Department said the victim in Friday's deadly shooting on the city's west side was a 36-year-old man.

The Auburn Police Department is investigating a deadly shooting that occurred Friday morning on the city's west side. 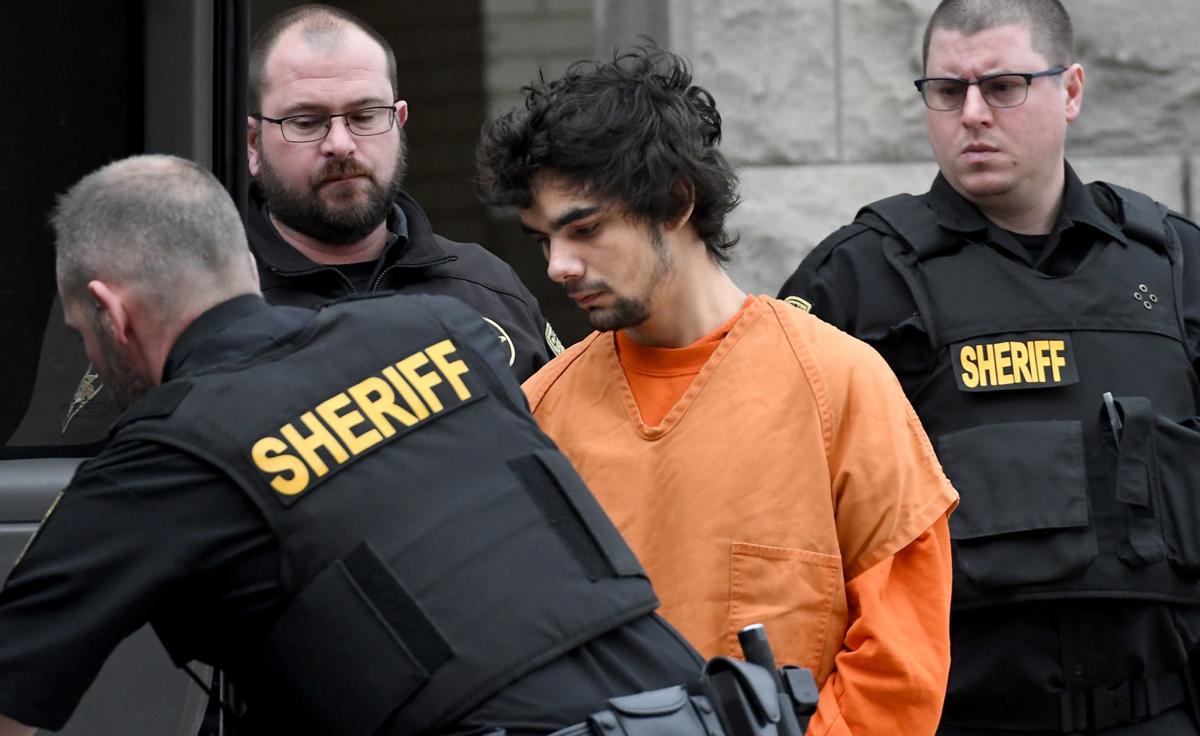 Auburn Police Department Chief Shawn Butler, at podium, leads a press conference Monday to announce that three people have been charged with murder in the shooting death of Joshua Poole on Nov. 15. 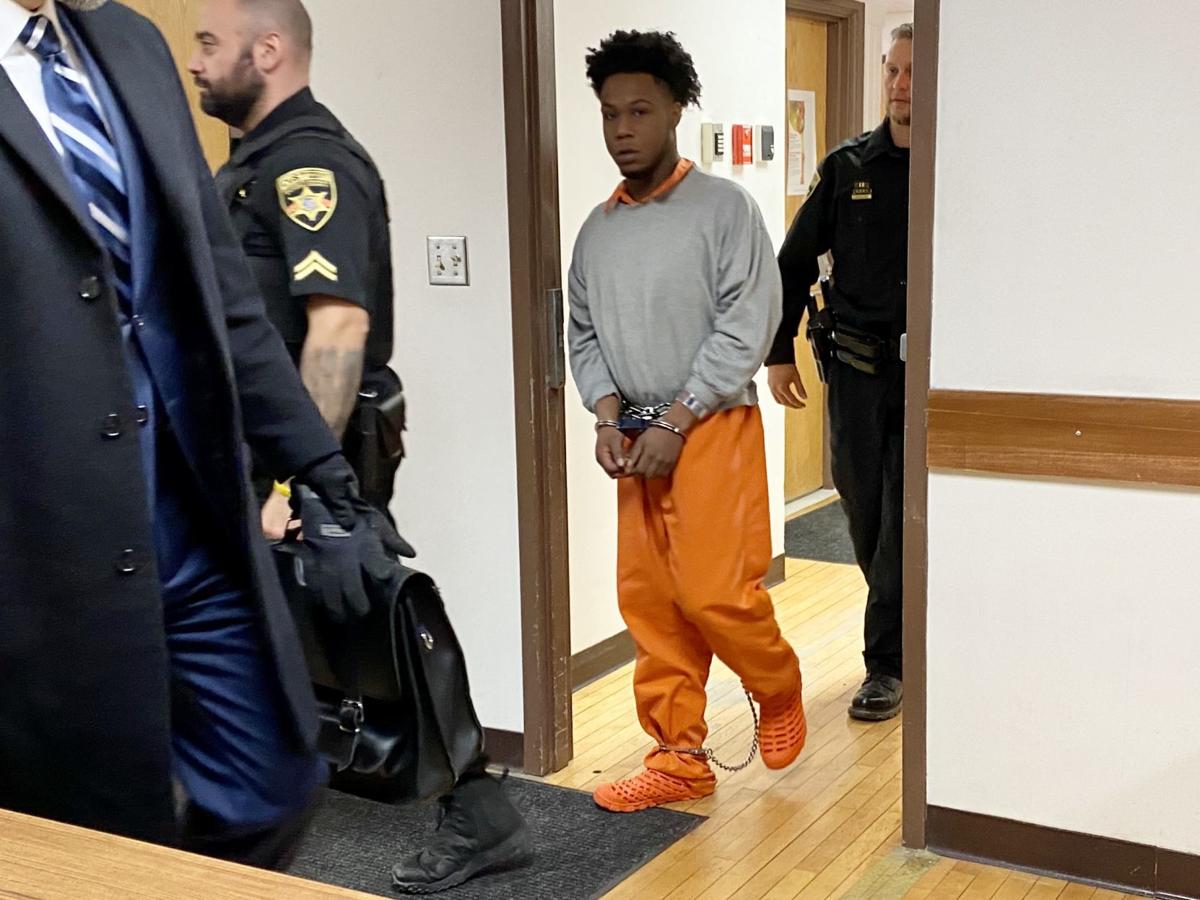