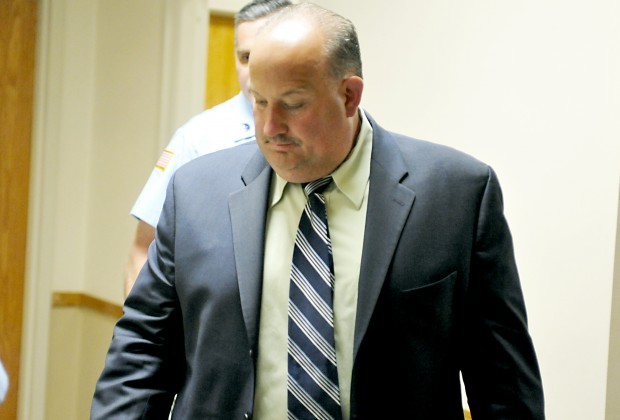 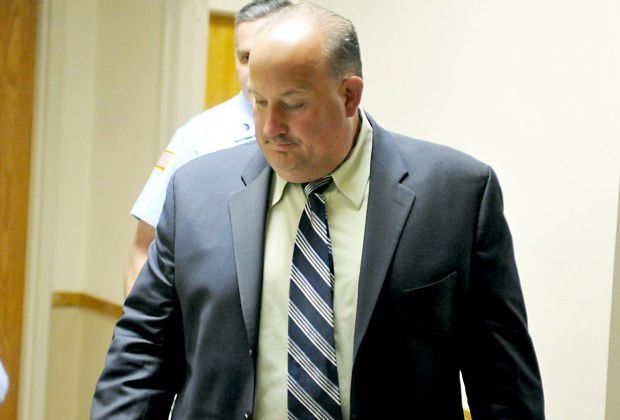 From June 2012: Former Auburn police officer Brian Hutchings is escorted into Cayuga County Court to be tried for allegedly stealing thousands of dollars from the Cayuga Police Benevolent Association.

AUBURN | No one denies that Brain Hutchings wasn't the best treasurer.

The question now in Cayuga County Court — the answer on which Hutchings' fate hinges — is whether the former Auburn police officer used his elected position to steal thousands of dollars, or was just a bad bookkeeper.

On Tuesday, Hutchings, a 19-year veteran of the force, had his first day in court, facing charges accusing him of stealing at least $29,000 from the Police Benevolent Association while serving as treasurer.

The bench trial, to be decided by Judge Mark Fandrich instead of a jury, started with the attorneys summarizing their arguments.

In the prosecution's opening statement, District Attorney Jon Budelmann said Hutchings stole money from the PBA using two methods: pocketing money he was supposed to deposit and withdrawing funds from the association's account.

"This is a trial about an abuse of trust — of broken trust and theft," Budelmann said.

Budelmann said that during Hutchings' tenure as treasurer from 1995 to 2009, the defendant covered up his alleged thefts by dealing with cash rather than checks, violating the association's policy, ensuring no paper trail existed.

"The defendant withdrew cash ... without any authorization, all on his own," Budelmann said.

In the defense's opening statement, Douglas Bates said while Hutchings may not have always followed the PBA's policies, the $29,000 in question could be accounted for through Hutchings' cash transactions on behalf of the PBA.

"This was a flawed investigation," Bates said, arguing the DA's office had a "limited understanding" of how the PBA worked.

Through Hutchings' testimony, Bates said the defense would prove the defendant didn't steal.

"True, there were a lot of expenditures made in cash. But that doesn't mean Mr. Hutchings benefited from them," Bates said. "He can account for virtually all the monies he received, and he will do so."

Budelmann called four witnesses on the trial's first day. Three of the witnesses, all current APD officers, discussed Hutchings' duties as treasurer, along with what happened when officers finally became suspicious of Hutchings in 2007 and 2008.

Elected in 1993, Clancy said he spent his two years as treasurer collecting dues from members and depositing and writing checks. Clancy said he followed the PBA policy of ensuring two members signed every check, explaining it was against policy to withdraw cash from the PBA account or pay bills with cash.

"You want to make sure everything is above board when you're handling someone else's money," Clancy said.

When Hutchings took over, Clancy said he told Hutchings about the policy.

Officer Mark Pilipczak, president of the PBA during Hutchings' tenure, testified that he never checked to see if Hutchings deposited money from raffles, ticket sales, adding he was even comfortable signing incomplete checks.

The three officers said they didn't question Hutchings' work until his last year as treasurer. After hearing officers say Hutchings was pocketing PBA funds, Pilipczak asked Hutchings to give him the books — a request Hutchings allegedly refused twice. Pilipczak said Hutchings told him he'd already had the books audited.

"He folded his arms and got a little excited about it — mean, actually, that someone was questioning his booking," he said.

After the meeting, Pilipczak said Hutchings stopped by his house and asked him to look at disbursements, specifically one regarding a $500 donation to a Throop woman. Pilipczak told Hutchings he had no recollection of the donation.

"He said, 'Well, as long as you've got my back,'" Pilipczak said. "My response was, 'I don't have your back, because I don't remember any of these cash disbursements."

The trial will reconvene at 1:30 p.m. Wednesday.

Hutchings is currently serving one to three years in prison after a jury found him guilty of unrelated coercion and burglary charges in 2011.

From June 2012: Former Auburn police officer Brian Hutchings is escorted into Cayuga County Court to be tried for allegedly stealing thousands of dollars from the Cayuga Police Benevolent Association.