The polls have closed in Cayuga and Onondaga counties as voters decide who will represent them in local government.

The Citizen and auburnpub.com will have updated results throughout the night. Our team of reporters will have stories on several of the competitive races in the area, including Auburn mayor, city council and Cayuga County Legislature.

Here are the 2019 Cayuga County-area election results (winners in bold):

*Too close to call between Locastro and Carabajal

*Nightengale apparent winner, but too close to call due to absentees

*Race too close to call

*Race for second spot too close to call

*Race for second seat too close to call

A single vote is separating the candidates in a race that will determine which party controls the Cayuga County Legislature in 2020.

Unofficial election results Tuesday night showed Democrats picking up two seats in Auburn while Republicans flipped a seat in the southern end of the county. Those three races, along with the uncontested seats and seats not up for election this year, left the weighted vote split in the Legislature at 418 for Democrats and 417 for Republicans.

With 442 weighted votes needed for a majority, all eyes next week will be on absentee ballot counting in District 14, where one vote separates incumbent Republican Michael Didio and Democratic challenger Gwen Webber-McLeod.

Republican incumbents Andrew Dennison and Christopher Petrus and Democratic incumbent Aileen McNabb-Coleman were not contested in this year's election so all three have earned another four-year term.

Here's a look at the results in the four contested races:

District 8 (Genoa, Locke, Venice): Hans Pecher, running on the GOP and Conservative lines, won the rematch in a race with incumbent Democrat Joseph DeForest, who was also on the Working Families Party line. Pecher, a former legislator who lost to DeForest four years earlier, received 665 votes to DeForest's 404.

District 10 (Auburn): In a race to replace current Legislator Joseph Bennett, Heidi Nightengale, on the Democratic, Working Families and Auburn lines, leads 349-323 over Republican, Conservative and Independence candidate Edward Darrow. There are 43 absentee ballots issued in that race, according to the Cayuga County Board of Election, which means Darrow's chances of coming back are low.

District 14 (Auburn): Incumbent Didio (Republican, Conservative, Independence) leads challenger Webber-McLeod, 560-559. In that race, 114 absentee ballots were issued. Ballots sent by mail and postmarked by the deadline have until Nov. 13 to arrive at the BOE. Counting of absentee ballots will begin next week.

In another Cayuga County Legislature-related matter, 79 percent of voters answered yes to a question about changing legislative terms in the 2021 race to align the full the body into the same election cycle. That measure will allow the Legislature more options to consider for redistricting after the 2020 U.S. Census results are released.

In a three-way race in Throop, Democrat Eric Ridley prevailed. He received 315 votes, compared with 214 for Republican/Conservative incumbent William Tarby and 98 votes for Libertarian Dayton Carpenter.

In the only other contested supervisor race, Cato incumbent Charles Ray, on the Democratic, Republican, Conservative and Independence lines, beat an independent challenge from Edward Mossow, 338-70.

Auburn police are asking for the public's assistance in locating a man missing since Oct. 30.

The APD said in a news release Tuesday that Brandon A. Burnham, 37, of Auburn, was last seen in the city wearing a dark-colored hooded sweatshirt and blue jeans. He is white, about 5 feet 11 inches tall and weighs 155 pounds. He has brown hair and eyes.

Police said Burnham has limited contacts in the Auburn and Oswego areas. 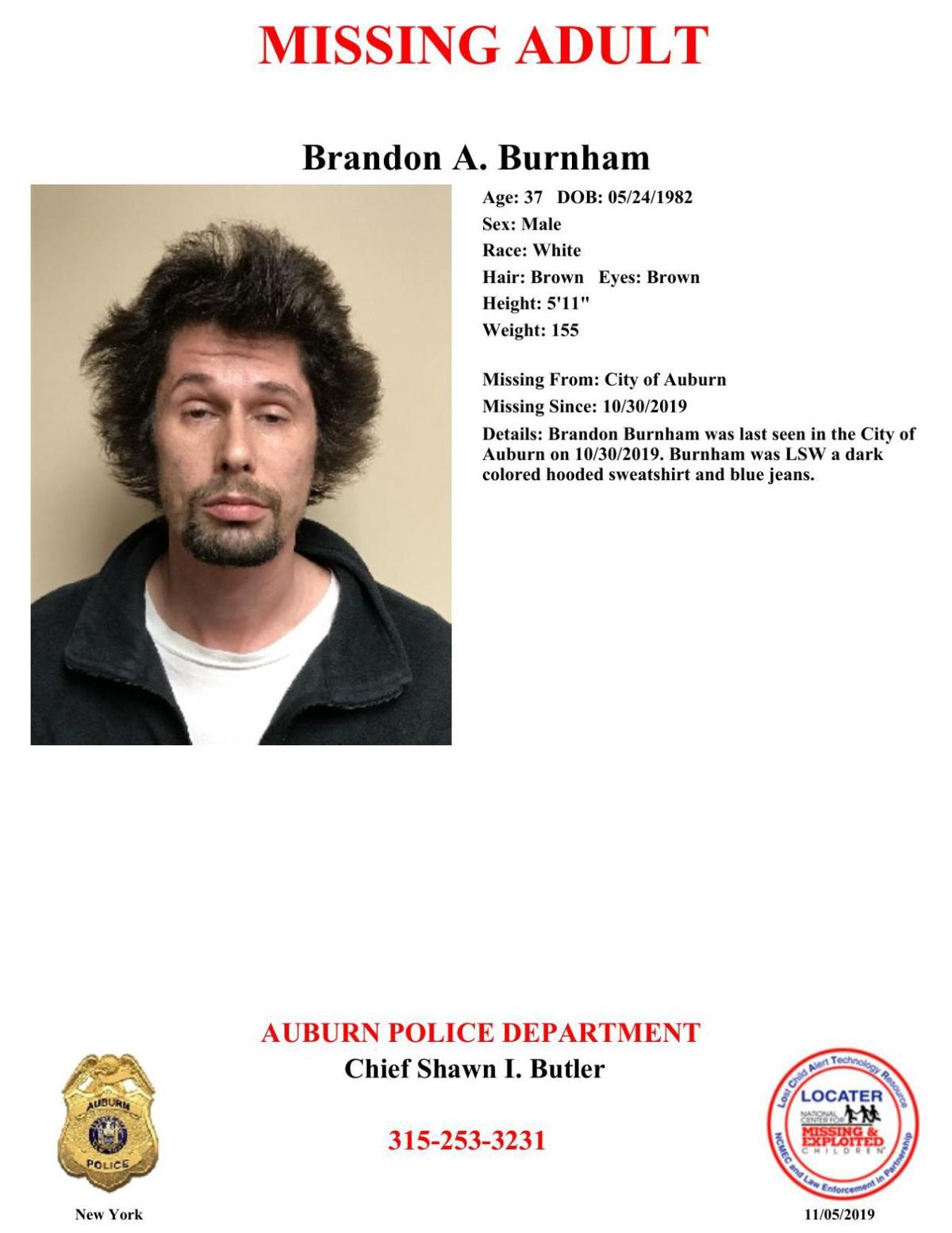 At least one Arizona Diamondbacks observer believes Auburn native Tim Locastro will have a spot on the 2020 roster.

MLB.com writer Steve Gilbert shared his predictions for who will make the Diamondbacks' opening day roster. There are 26 roster spots and teams usually carry four or five outfielders.

Gilbert considers Locastro one of three outfielders who are "locks" to make the opening day roster.

"Locastro proved to be valuable off the bench," Gilbert wrote. "He has a knack for getting on base via the hit-by-pitch, and his speed makes him a threat on the bases. He brings a lot of energy, and can play all three outfield positions."

Locastro hit .250 and had a .356 on-base percentage in 91 games with the Diamondbacks last season. He was used primarily in a fourth outfielder's role. He started when another player was injured or someone had a day off. He also served as a defensive replacement and pinch-hitter.

In 2019, he set a new Diamondbacks single-season record with 22 hits-by-pitches. He stole 17 bases and is approaching a major league record for consecutive stolen bases without being caught to start a career.

His speed is an asset for the Diamondbacks. According to MLB.com's Statcast, he is the fastest player in Major League Baseball.

Locastro also had a knack for clutch hitting. He had three walk-off hits to win games for the Diamondbacks. He had a game-winning RBI single in the final game of the season.

In an interview with The Citizen after the season, Locastro said it was a "special year."

"I was up in the big leagues a lot longer than I anticipated when this season started and I had an unbelievable time," Locastro said. "Our team was awesome, the coaches were awesome and the chemistry of the whole team was amazing."

The MLB.com story isn't the first hint that Locastro has a future in Arizona. The Arizona Republic interviewed Diamondbacks general manager Mike Hazen in October. Hazen, the newspaper reported, wants to assemble an offense "capable of creating runs in a variety of ways, including scratching across a run here or there on days when they're facing tough pitching."

Hazen is quoted as saying, "Guys that consistently get on base is number one." Locastro fits that description. He had the second-best on-base percentage on the team.

Quill secured his fourth term as mayor by taking 3,108 votes to repeat-challenger and former mayor Timothy Lattimore's 2,373 and newcomer Brett Tracy's 155, according to the Cayuga County Board of Elections.

At the Cayuga County Democratic Committee watch party at Auburn's Ancient Order of Hibernians, Quill said the theme of both his tenure as mayor and his campaign was teamwork.

"Everything revolves around teamwork, and that was demonstrated this year," Quill said.

Incumbents Giannettino and Carabajal, running on the Democrat and Working Families ballot lines, were both seeking their second terms on the council.

They were challenged in their bids by Adam Miller and Timothy Locastro, both on the Republican, Conservative and Independence lines, and Libertarian Justin Burchard.

At a watch party at A.T. Walley & Co., Locastro praised the people on his campaign when the early results came in.

"My people worked hard and they went out there and it paid off, hopefully," Locastro said. "There's still a long way to go, there's still a lot of absentee votes out there. Win, lose or draw, I'm going back to work tomorrow."

Carabajal similarly thanked everyone who helped on her campaign, and said she was still expecting to pull out a victory when absentee ballots are counted next week.

"I can look out here and see lots of people who have had their hands on my back while this has happened. For that, I am so grateful," Carabajal said.

According to the board of elections, there were 437 absentee ballots issued this election, with 296 turned in so far. The board will continue to accept absentee ballots that were post-marked by Tuesday until next Wednesday.

Lattimore, who was running his fourth rematch against Quill, said he loves the city of Auburn and was glad to see a fellow Republican get onto the council at least.

Political newcomer Tracy ran a campaign in which he promised to serve as a voice for residents, who he said were going unheard by the existing administration.

The central issue that arose in both the mayoral and council races could be boiled down to whether or not residents were happy with the way the city has been run for the past several election cycles.

In debates, billboards and speeches, the incumbents made their pitch to stay with the shared slogan of “steady leadership making progress for Auburn.” Carabajal, Giannettino and Quill each touted the city's work in cleaning up neighborhoods, protecting the city's drinking water, and revitalizing downtown.

A significant reason behind the success of those projects, the incumbents said, was due to the council's positive relationships with the state and their effective advocacy that had helped to secure state support in forms like the $10 million Downtown Revitalization Initiative or the filtration system to protect water from harmful algal blooms.

Many of the same projects the city received state support for, however, were the focus of criticisms from the council challengers, and became something of a common theme among several of their campaigns. Miller, Locastro and Burchard were all critical of the city's acceptance of certain state mandates as stipulations for receiving funding.

The city, the challengers said, had ignored residents' concerns on such projects — the implementation of back-in parking and the location of the Equal Rights Heritage Center in particular — and promised they would more keenly listen to constituents if elected.

Locastro said he'd continue the campaigning practice of going door-to-door; Burchard described himself as the candidate that listens; and Miller said he would follow the agenda of voters rather than any of his own.

The mayoral race struck a similar but slightly different tone, as much of the opponents' platforms focused on jobs and economic development.

Lattimore, who served as mayor from 2004 to 2007, made attracting big industry back to the city a tentpole of his campaign. He said he hoped to utilize the city's closeness to major universities and colleges in order to connect Auburn to burgeoning tech industries, especially the growing drone industry in central new York.

A political newcomer, Tracy pitched his himself as a breath of fresh air for city government, saying his perspective was closer to residents' than his two opponents who both have spent years in public service.

On Tuesday, Tracy said he'd felt good about the race, noting that his opponents had decades more experience than him, and promised to run again in the future.

Related to this collection

The Citizen's top five most-read stories of the work week. The list includes stories about an Auburn bakery, a minor accident involving school…

Feb 17 recap: Auburn and Cayuga County news you may have missed today

Get a quick digest of today's top local news stories from The Citizen.