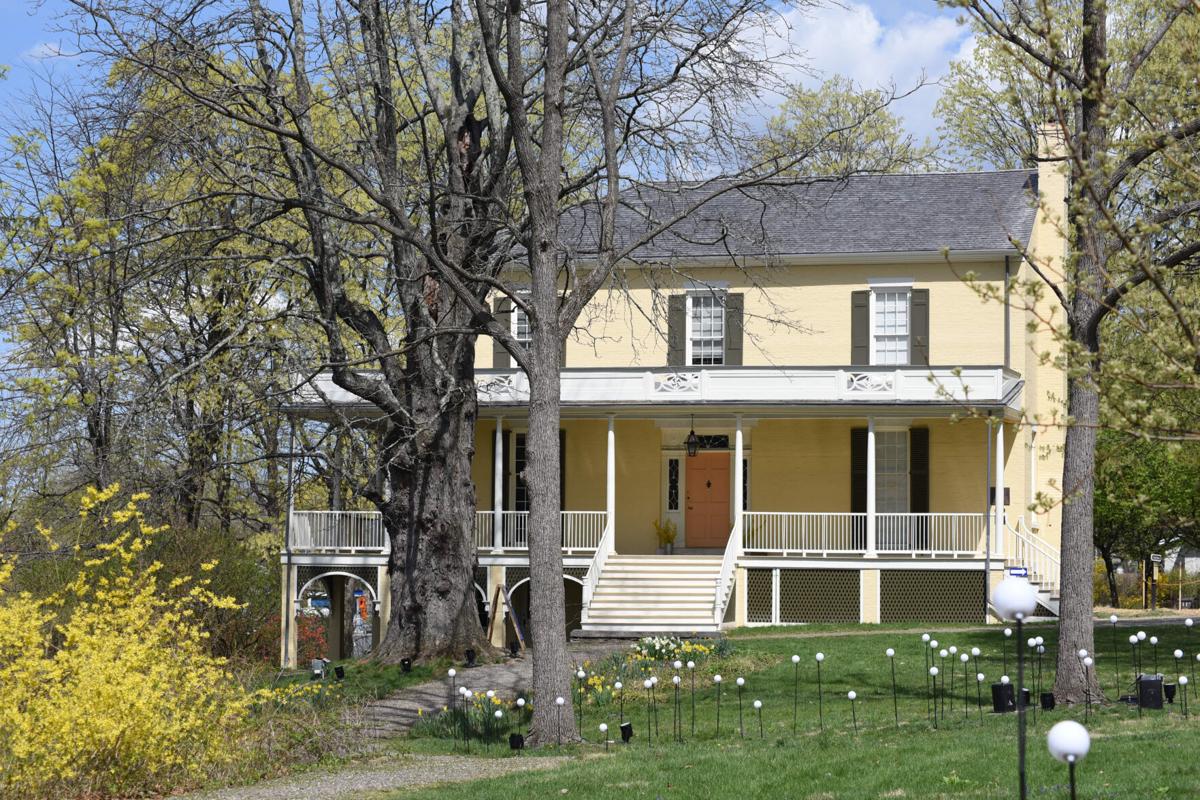 The main house at the Thomas Cole National Historic Site in Catskill. 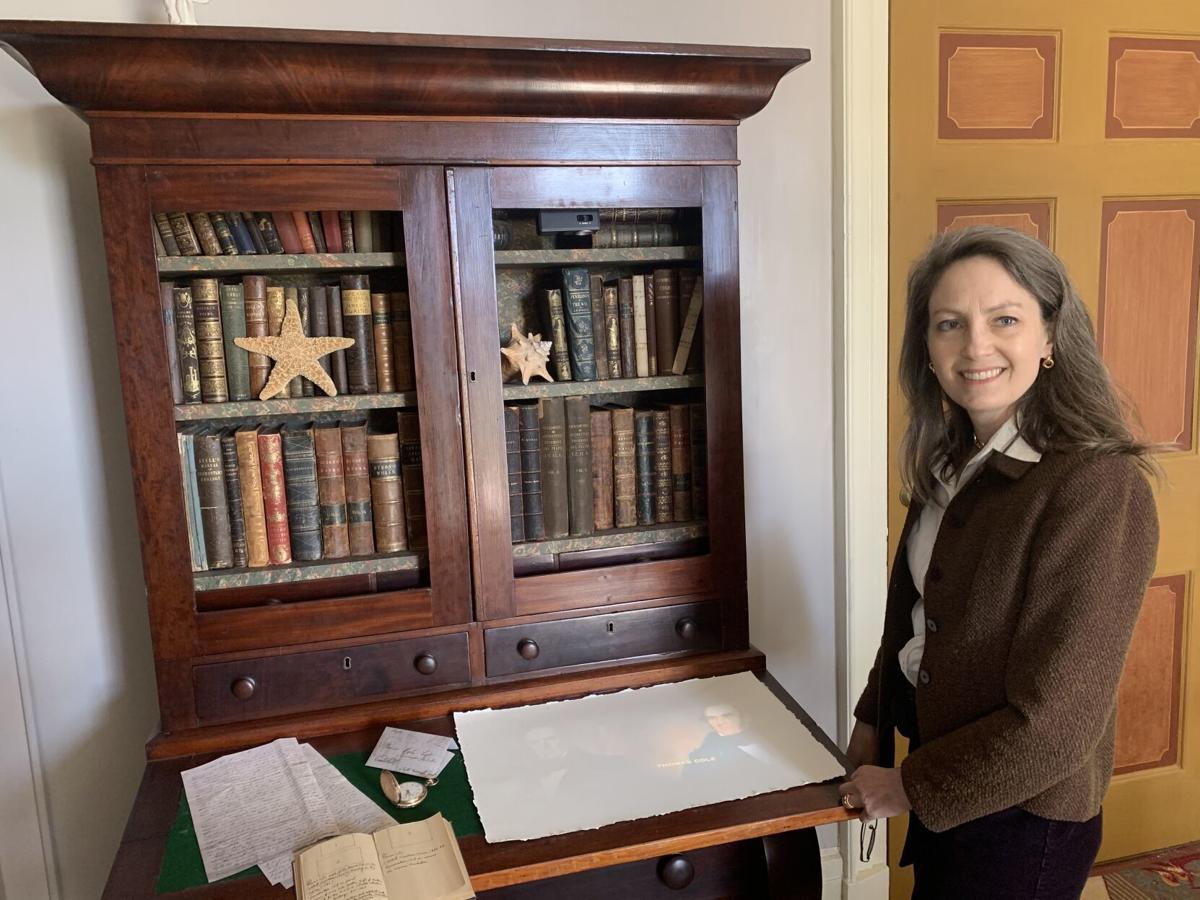 Thomas Cole Estate Executive Director Elizabeth Jacks stands in front of one of the digitally interactive exhibit pieces that makes letters come to life at the historic site in Catskill.

CATSKILL — The Thomas Cole National Historic Site has more than one reason to celebrate this year.

Not only is the historic site in the village of Catskill celebrating its 20th anniversary, but it has been named by the Institute of Museum and Library Services as one of 15 museums nationwide as a finalist for the 2021 National Medal for Museum and Library Service. The National Medal is the nation's highest honor given to museums and libraries that demonstrate significant impact in their communities, according to a press release.

Elizabeth Jacks, the executive director of the Cole site, said the museum was nominated by U.S. Rep. Antonio Delgado, D-Rhinebeck. She said there are two other finalists from New York but the remaining finalists are from across the country. Jacks said three museums and three libraries would be selected as winners of the National Medal during a ceremony in July.

"To be nominated as a finalist is an extraordinary honor for the Thomas Cole National Historic Site," Jacks said in a statement. "The Thomas Cole historic site opened in 2001 and this year marks our 20th anniversary. We are continually working to further our mission to draw inspiration from the artist Thomas Cole and engage broad audiences through innovative educational programs that are relevant today and meet the evolving needs of our community."

In his own statement, Delgado said he was proud to nominate the Thomas Cole site.

"For 20 years, this beautiful museum has showcased invaluable Hudson River School art to families, tourists, and students," Delgado said. "Catskill, and all of upstate New York, are lucky to have the Thomas Cole house in our backyard."

Jacks said if conditions allow, the awards ceremony would take place at the White House this summer. Otherwise, the winners will be announced online via the Zoom platform, she said.

In the meantime, the historic site is moving forward into its 20th year in operation, Jacks said. She said the site first opened to the public in July 2001 after a community effort to save the main house.

"At the time, it was the main house only that was open," Jacks said. "And it was structurally restored, but no one knew what the original interiors looked like during Thomas Cole's time because there were no photographs from that time. So the inside had not yet been restored and the other two buildings on the site had not yet been restored, one of which actually was gone ... demolished way before the site was a museum. So that was put back." She said the building that was put back is called the "New Studio" and many other changes have taken place across the museum's campus over the past two decades.

Jacks said being nominated for the National Medal is an affirmation of how far the organization has come and the 20th anniversary is a chance for the site to celebrate "the past, the present, and the promise of a great future ahead of us as well."

This year, the historic site is opening up its buildings again after it suspended interior guided tours due to the COVID-19 pandemic, according to Jacks. She said the site would soon be doing guided tours by appointment and then will open up the site for timed ticketing as the season goes along.

Jacks said the site is also currently hosting a "Spring Lights" exhibition on its grounds.

Spring Lights is an outdoor nighttime walk-through experience at the site inspired by Cole's love of nature, according to provided information. Visitors with timed tickets explore a one-way looping path to encounter a building-wide projection by contemporary artist Brian Kenny and immersive light and sound environments designed by Clerestory Light. The experience features audio of Cole's written words brought to life by film actor Jamie Bell.

The exhibition is open on Fridays, Saturdays, and Sundays through Sunday, May 9.

"We decided we wanted to create something that could be experienced outdoors and that's really accessible to everybody," Jacks said. The exhibition will also have free community nights for people who have children in the local public schools or who have a library card from the Catskill Public Library, she added.

Then on Saturday, June 12, a site-wide exhibition called "Cross Pollination" will open as a joint venture with the Olana State Historic Site across the river, Jacks said.

According to provided information, the exhibition will explore the theme of cross pollination in art and the environment from the 19th century to today. The project stems from artist Martin Johnson Heade's 19th-century series of hummingbird and habitat paintings, "The Gems of Brazil," and their unique relationship to the landscapes of Hudson River School artists Cole and Frederic Church, as well as their continued significance to major contemporary artists working today.

Jacks said the exhibition would feature work by Cole and Church, as well as their daughters. The contemporary art would be inside the main Thomas Cole house in the historic rooms, as well as on the grounds, she said.

"They're responding to those themes about pollinators and the loss of pollinators in our region and the resulting climate impacts of that," Jacks said. "So, it has a contemporary relevance as well."

An attorney for Ray Messenger, a descendant of William H. Seward who challenged the removal of an historic painting from the Auburn museum tha…

After more than five years of legal challenges, an agreement has been reached that will allow for Thomas Cole's "Portage Falls on the Genesee,…

The main house at the Thomas Cole National Historic Site in Catskill.

Thomas Cole Estate Executive Director Elizabeth Jacks stands in front of one of the digitally interactive exhibit pieces that makes letters come to life at the historic site in Catskill.