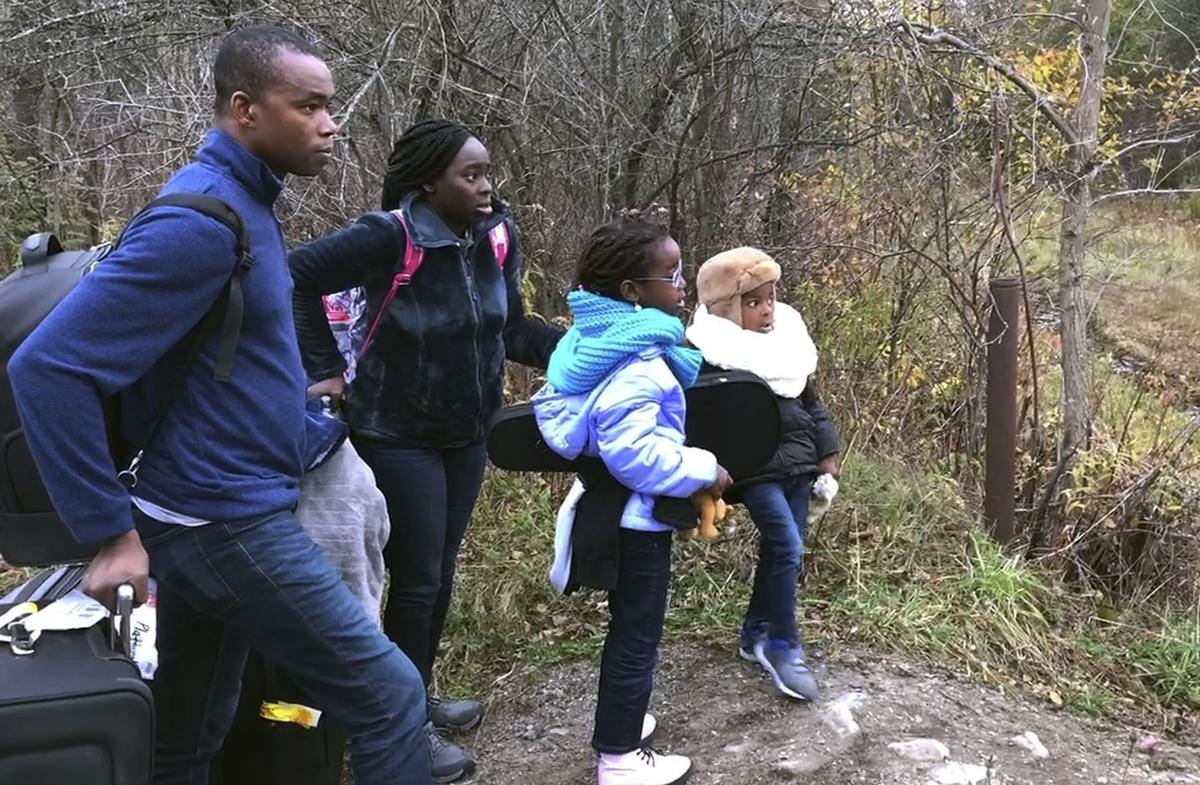 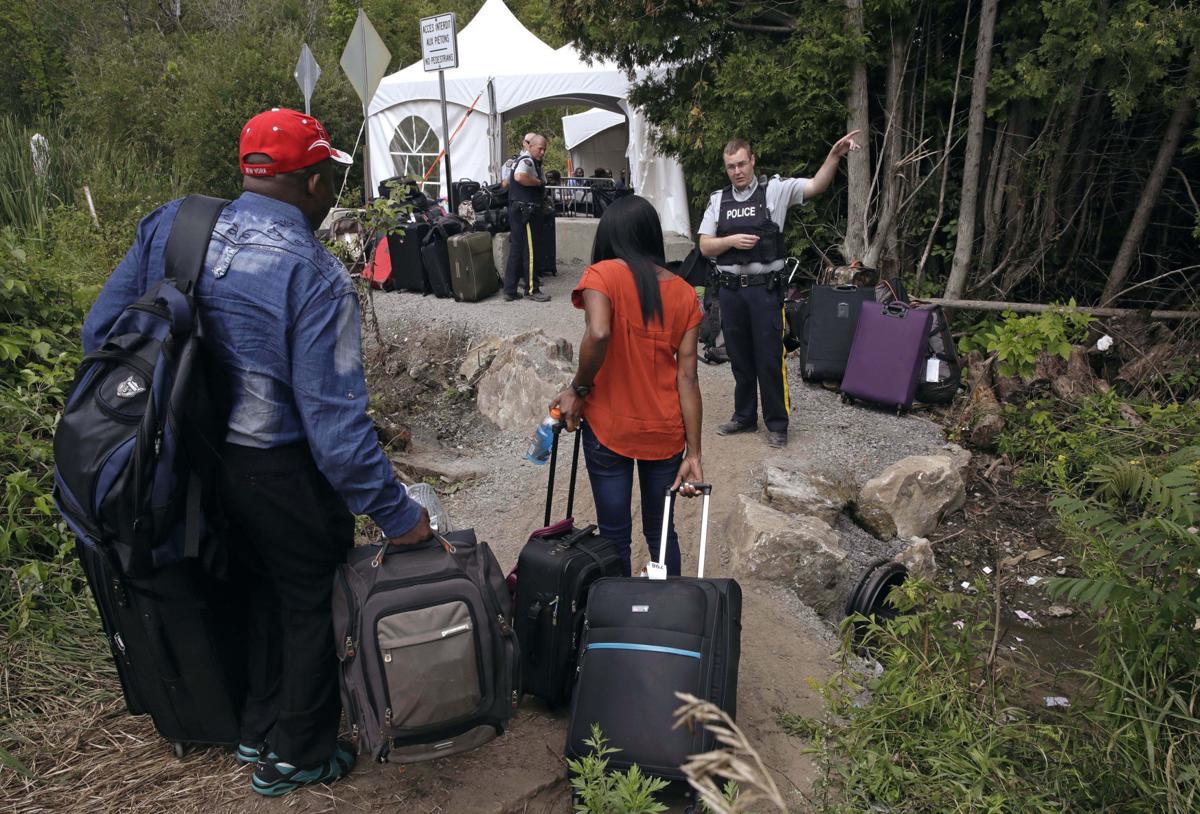 CHAMPLAIN — In the looming darkness, the Nigerian family of four, including two children carrying stuffed animals and a violin case, climbed out of a taxi at the end of a dead-end road in upstate New York as Canadian law enforcement officers watched a short distance away, across a ditch that marks the international boundary.

"This is an illegal point of entry, OK? If you cross here you are going to be arrested," a Royal Canadian Mounted Police officer said.

"Yeah," muttered the man, who wouldn't give his name, before he and his family dragged their belongings across the border and were led to a hastily built structure where asylum seekers are processed.

Tens of thousands have made the same north-bound trek since early 2017, when people who despaired of finding a permanent safe haven in the United States under new restrictive Trump administration policies began turning to Canada for help. Over a six-hour span on Monday, this family, another group from Nigeria, a man from Syria, another from Haiti and a family who wouldn't say where they were from all crossed at the same illegal entry point at Roxham Road, about 30 miles south of Montreal.

These migrants know that a longstanding agreement between the United States and Canada requires those seeking asylum to apply in the first country they arrive in. So, if they crossed from the U.S. at a legal Canadian port of entry, they would be returned and told to apply in the U.S.

But if they request asylum on Canadian soil at a location other than an official crossing, the process is allowed to go forward. In most cases, the refugees are released and allowed to live in Canada, taking advantage of generous social welfare benefits while their asylum applications are reviewed, a process that can take years.

Now, a legal case being heard in Toronto federal court this week is challenging that 2002 U.S.-Canadian agreement, which the Trump administration has sought to replicate to stem the flow of migrants at the United States' southern border, striking similar pacts with the governments of Honduras, Guatemala and El Salvador.

Three human rights groups have filed the case calling on Canada to withdraw from the U.S.-Canadian agreement, arguing that the Canadian government has no guarantee that immigrants returned to the United States will be safe because of the Trump administration's "full-out assault on the rights of refugee claimants and refugees," said Alex Neve, secretary general of Amnesty International Canada, one of the groups bringing the case.

The legal challenge cites the widespread detention of asylum seekers who are turned back from Canada and the separation of parents and children as other examples of why the U.S. is not a "safe" country for newly arrived immigrants.

"At this moment the U.S. asylum system is on trial in Canada," Neve said.

The Trump administration crafted a similar policy to keep Central American and other immigrants from coming to the U.S. by signing pacts with Guatemala, El Salvador and Honduras earlier this year. Under the agreements, immigrants who pass through those countries on the way to the U.S. are denied asylum here. Critics of the Trump policies contend that the Central American countries are unsafe for asylum seekers in their own ways because they have some of the highest murder rates in the world.

The agreements have also created strange bedfellows in Trump and Canadian Prime Minister Justin Trudeau, who have repeatedly clashed. The two leaders both want to keep the U.S.-Canada asylum agreement intact.

Marie-Emmanuelle Cadieux, a spokeswoman for Canada's border security minister, Bill Blair, wouldn't comment on the specifics of the case, but said the government constantly monitors developments in the U.S. and Canada, and is continuing to work with the U.S. on ways to strengthen the agreement.

"The United States remains a country with an extensive system for processing applications that remain subject to administrative and legal checks and balances," Cadieux told The Associated Press. "Any and all changes are considered in the context of the asylum system as a whole."

U.S. government officials did not respond to multiple requests for comment.

Dozens of protesters chanting "suspend the agreement," gathered outside the court this week, holding up signs that read, "The USA is not safe" and "Uphold all laws that protect refugees."

Among them was Kikome Afisa, who said her own experience as an asylum seeker compelled her to speak out.

Afisa, who left Uganda amid government oppression and violence, said she was detained for four months after crossing into the U.S. from Mexico. She went to Canada in May through an illegal crossing in Quebec. Afisa said she has applied for asylum and is awaiting a hearing.

"The U.S. is not safe," she said. "No help, no shelter, nothing. You can stay outside on the street because you don't have nothing when you're a refugee. You come from your country because of some problem, you don't have money," she said, wiping away tears.

According to Canadian government statistics, since early 2017 through June nearly 50,000 people have applied for asylum after crossing into the country illegally. Most of those irregular border crossers entered Canada at Roxham Road.

In the summer of 2017, hundreds of people a day were crossing after traveling to the New York border town of Plattsburgh, where many would hire taxis for the 21-mile ride to Roxham Road in the town of Champlain. Now the numbers are down, but local taxi drivers still meet the bus each day looking for fares they can take to Roxham Road.

For much of that time, local activist Janet McFetridge has met the asylum seekers at the New York border before they enter Canada. On Monday, she gave the two Nigerian children scarves to help ward off the looming winter.

"It hasn't really changed in that it's always people who are looking for a better life and they are fleeing something, whether it be some sort of fear or persecution or religious freedom or economic opportunity," she said. "They are coming to find something where they can be safe and healthy."

OLEAN — St. Bonaventure University President Dennis DePerro died Monday from complications of COVID-19, according to the university. He was 62.

ALBANY — Gov. Andrew Cuomo on Wednesday rejected calls for his resignation in the face of sexual harassment allegations that have threatened h…

Lt. Gov. Kathy Hochul of Buffalo has had very little to say about the sexual harassment allegations against Gov. Andrew M. Cuomo – which could…

ROCHESTER — A Rochester man has been arrested in the fatal shooting of his younger brother earlier in the week, police said.

ALBANY — Gov. Andrew Cuomo acknowledged for the first time Sunday that some of his behavior with women had been “misinterpreted as unwanted fl…