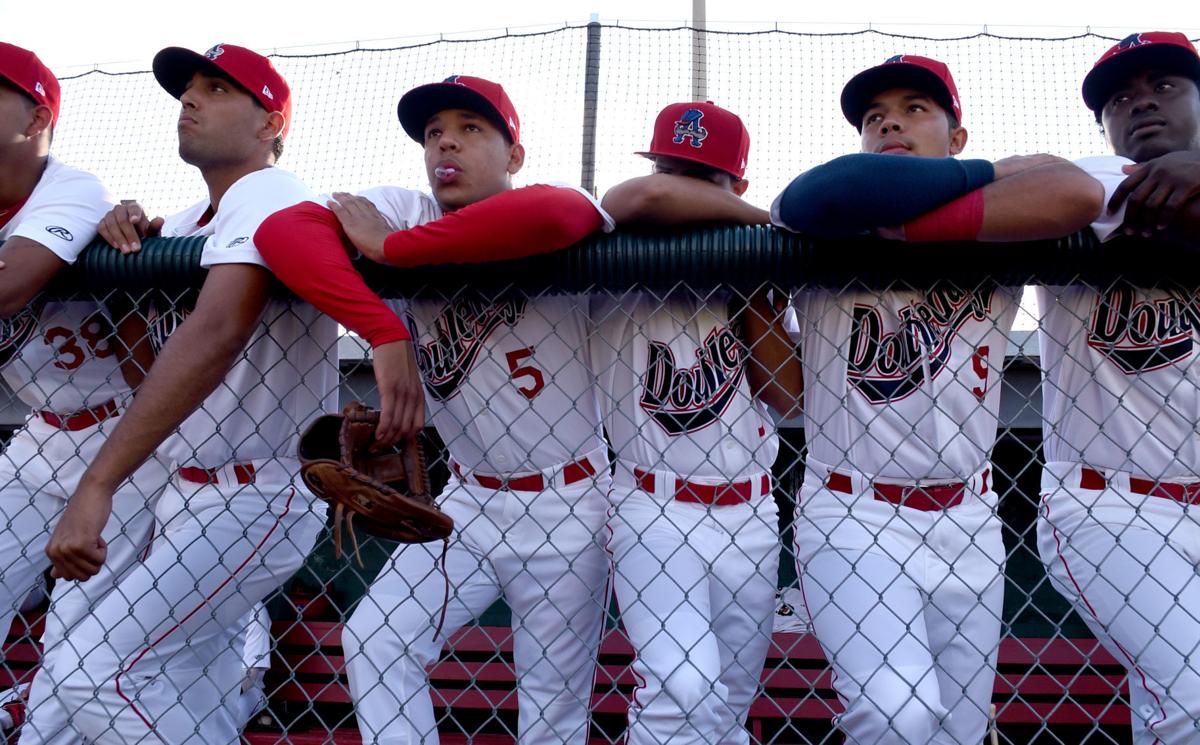 Auburn Doubledays players wait for the start of the home opener against Batavia in 2017 at Falcon Park.

Falcon Park in Auburn is closed due to the COVID-19 pandemic.

For the first time in decades, there will not be professional baseball in Auburn this summer.

Minor League Baseball announced Tuesday that it was canceling seasons at all levels, including the New York-Penn League, in 2020.

MiLB cited Major League Baseball's decision to not provide players to minor league affiliates as the primary reason. MLB and the Players Association recently agreed on a Collective Bargaining Agreement that included a 60-game major league season and expanded rosters in lieu of the coronavirus pandemic.

The decision to cancel the minor league season also means the Syracuse Mets, who are a member of the International League at the Triple-A level, will not play games this year.

"These are unprecedented times for our country and our organization as this is the first time in our history that we've had a summer without Minor League Baseball played," said MiLB President Pat O'Conner in a statement. "While this is a sad day for many, this announcement removes the uncertainty surrounding the 2020 season and allows our teams to begin planning for an exciting 2021 season of affordable family entertainment."

The cancellation means Auburn will not host professional baseball for the first time since 1981, and for only the second time since Auburn joined the New York-Penn League in 1958.

Full-season minor league baseball has been on hiatus since mid-March. The New York-Penn League, a short-season league for recent MLB draft picks, was not scheduled to begin play until mid-June. On June 12 the league announced it was suspending the start of the season indefinitely.

The Doubledays were originally scheduled to begin play Thursday, June 18, at Batavia, while the home opener at Falcon Park was set for Sunday, June 21, against State College.

“It’s definitely a hard pill to swallow right now, just with everything that's going on and all the plans for the 2020 season we had in store,” Doubledays general manager David Lindberg said. “We were really looking forward to getting out there and putting on a great atmosphere for all of our fans, our sponsors and our season ticket holders.”

Concerning ticket refunds, Lindberg said he reached out to all season ticket holders via email and full refunds will be offered.

Now that the 2020 season has been canceled, the Doubledays look ahead to what could be a murky future in Auburn. The current Professional Baseball Agreement (PBA) between MLB and MiLB was set to expire following the 2020 season. Last October, Baseball America and the New York Times reported that negotiations on a new PBA could eliminate at least 40 minor league teams by 2021. Auburn, and the New York-Penn League as a whole, would be a casualty under the new PBA.

Part of the initial proposal would include the development of a “Dream League,” consisting of all undrafted players that would be jointly owned by MLB and MiLB. According to Baseball America, cities like Auburn that would lose minor league teams would still be guaranteed “baseball teams of some sort,” but it was reported in April that efforts to create such a league had stalled.

Even if Auburn was to survive minor league baseball's reported purge, the Doubledays’ affiliation with the Washington Nationals is in question, as the current player development contract between the two organizations was set to expire after the 2020 season. Of late, the Doubledays and Nationals have been content to extend their partnership, which has been in place since 2011, in two-year increments. Lindberg had no comment on a player development contract extension.

When Falcon Park, which has been closed since late March, will reopen for public events also remains to be seen. The Doubledays typically occupy the ballpark until the beginning of September, and Cayuga Community College athletic programs utilize the turf field throughout the fall. CCC and Auburn High School's baseball team typically use Falcon Park in the spring, but were unable to this year due to season cancellations.

Yankees, Mets to train in New York if MLB resumes

NEW YORK — The Yankees and Mets would train in New York if Major League Baseball and its players try to start the coronavirus-delayed season.

KANSAS CITY, Mo. - Fraught as it is while we remain engulfed in a pandemic that has killed more than 500,000 people and is surging locally, another adventure in reopening began Wednesday, the official reporting date for Major League Baseball's "summer camps." At least for the moment, it's a milestone in a bizarre time marked both by the great pause from the COVID-19 coronavirus and the great ...

MINNEAPOLIS - There was a 10-year period in which Joe Mauer was one of the elite hitters in baseball. But even with a line-drive swing, the willingness to hit the ball the other way, a keen eye at the plate and a proven two-strike approach, Mauer never got close to batting .400 or better in a season. Reaching .400 isn't easy. No one in the major leagues has done it since Ted Williams batted ...

Auburn Doubledays players wait for the start of the home opener against Batavia in 2017 at Falcon Park.

Falcon Park in Auburn is closed due to the COVID-19 pandemic.