Watch now: Biden and Trump face off in their final debate

Despite four Duke turnovers, Syracuse falls at home
Share this
{{featured_button_text}}
1 of 3 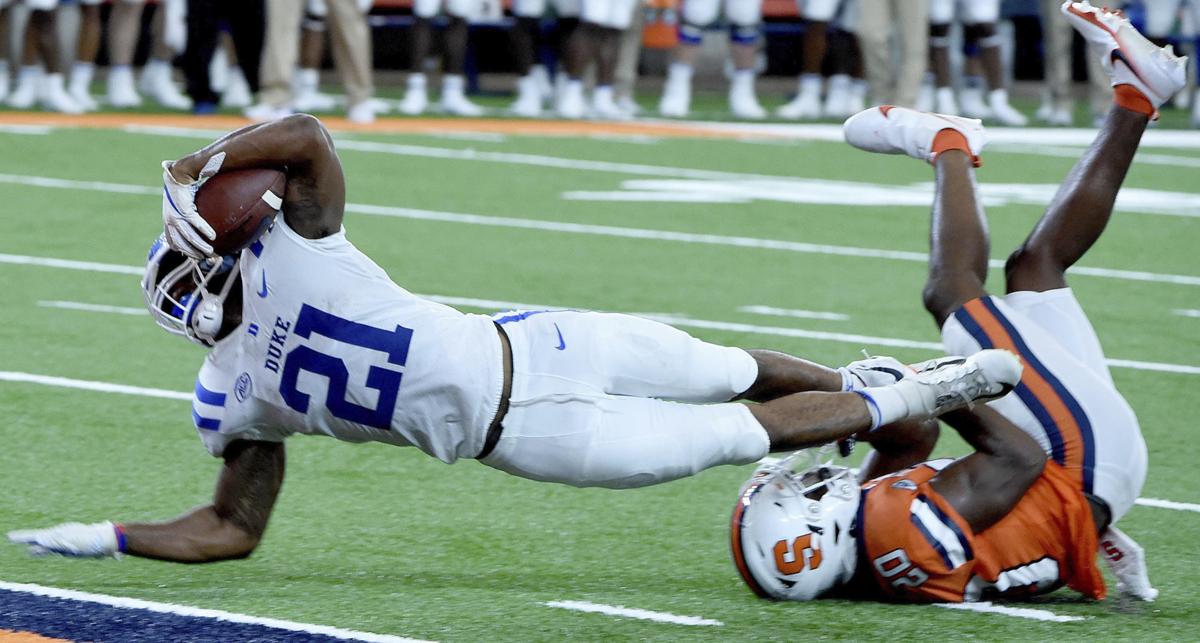 Duke running back Mataeo Durant is tackled short of the goal line by Syracuse's Cam Jonas Saturday at the Carrier Dome. 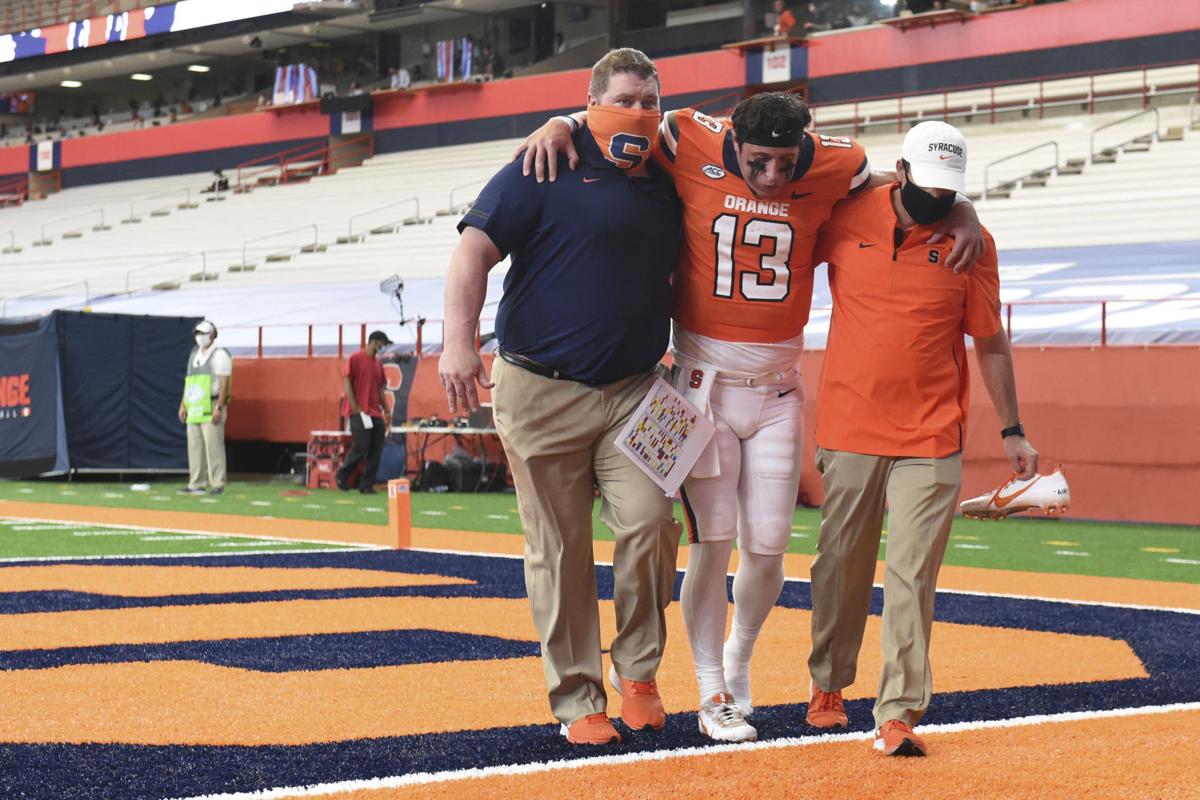 Syracuse quarterback Tommy DeVito is helped off the field against Duke Saturday at the Carrier Dome. 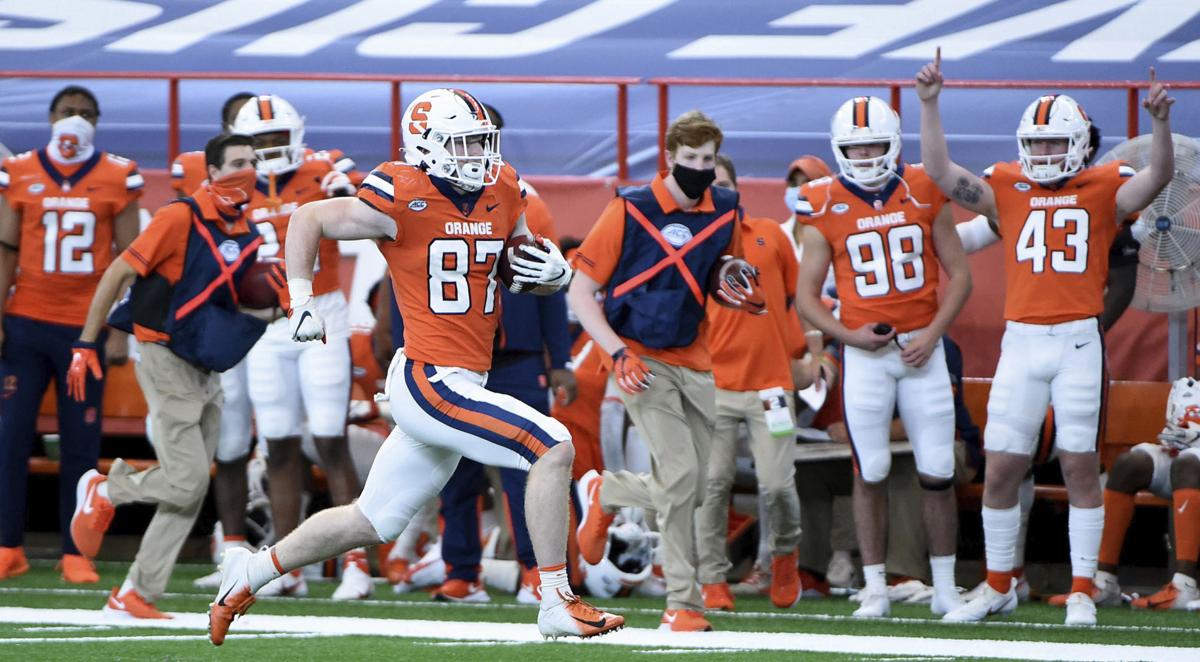 Syracuse tight end Luke Benson runs for a touchdown against Duke Saturday at the Carrier Dome.

Duke (1-4, 1-4 Atlantic Coast Conference) won despite three lost fumbles and an interception, but Syracuse (1-3, 1-3) only turned them into seven points. The Blue Devils entered the game with 15 turnovers, the most in the nation, while Syracuse was second nationally in turnovers gained with 10.

On this day, it finally didn't matter for the Blue Devils, who used the backfield tandem of Jackson and Durant to wreak considerable havoc while the Syracuse offense sputtered. Quarterback Tommy DeVito never found any sort of rhythm, misfiring repeatedly on long throws, and failed to capitalize on any of the turnovers. He finished 13-of-26 passing for 255 yards and two touchdowns. He was injured when sacked early in the fourth quarter for the fifth time and replaced by Rex Culpepper.

Duke came from behind with two touchdowns late in the second quarter to gain a 14-point halftime lead. Durant's 15-yard run and Brice's 52-yard pass to Jarrett Garner with a minute to go made it 24-10 and sapped some energy from the Orange after a big play by its defense in the first minute of the quarter.

Brice lost the ball when he was hit from behind by Cam Jonas and Orange linebacker Geoff Cantin-Arku scooped it up and returned it 28 yards for a touchdown and a 14-10 lead. Brice finished 22 of 38 for 270 yards, one yard off his career high.

Syracuse closed to 27-21 in the third when DeVito hit tight end Luke Benson on the left side for a 53-yard score.

Charlie Ham added his third field goal, a 21-yarder, late in the third for a 30-21 lead and Andre Szmyt responded with a 48-yarder for the Orange with just over 10 minutes left in the fourth.

Durant sealed it with a 3-yard run late in the fourth.

Duke took the opening kickoff and marched quickly downfield, scoring in seven plays, capped by Brice's pretty 26-yard toss to Jalon Calhoun on a crossing pattern. Jackson ripped off a 20-yard run early in the drive to set the tone for the game for the Blue Devils, who repeatedly racked up big gains on the ground in the first half. They outrushed Syracuse 179-15 in the opening quarter, with Jackson netting 94, including a 50-yard run, and Durant adding 63, including a 48-yarder.

Syracuse struck back in two plays as DeVito hit Taj Harris in stride down the right side for a 79-yard touchdown.

Duke went up 10-7 on Ham's 36-yard field goal late in the first, compliments of a drop on a potential interception by Syracuse's Trill Williams, who lost the ball after it caromed off his chest.

Last year, Syracuse rushed for 286 yards, led by a pair of 100-yard rushers in Moe Neal and Jarveon Howard in a 49-6 win. The Orange scored four rushing touchdowns and the defense held the Blue Devils to 157 yards passing. On this day, the ground game belonged to Duke, which outrushed Syracuse 247-39 in the first half, averaging just over seven yards a carry, ran 30 more plays, and had 22 first downs to five for the Orange. The Blue Devils finished with 282 yards rushing.

Syracuse was coming off a bye week after their first win of the season, 37-20 over Georgia Tech in the first game in the refurbished Carrier Dome.

Preseason first-team All-American safety Andre Cisco, the rover in the Orange's new 3-3-5 defensive scheme, did not play for the second straight game. He suffered a lower body injury in a collision in pregame warmups before Georgia Tech.

Duke: The Blue Devils finally demonstrated they can win despite the mistakes. They had just one turnover in a 38-31 loss last week to Virginia Tech but the lost fumbles and an interception against Syracuse indicate that's still a problem. The backfield tandem of Jackson and Durant creates problems for opponents.

Syracuse: The Orange finally found that missing link in the run game in the previous game with freshman Sean Tucker, who rushed for 112 yards and two scores against Georgia Tech two weeks ago, but he was not a factor against Duke. The Orange offense needs better balance. Not being able to take advantage of the turnovers doomed them.

Duke is at North Carolina State next Saturday.

Syracuse continues a four-game homestand with a game against Liberty next Saturday.

Copyright 2020 The Associated Press. All rights reserved. This material may not be published, broadcast, rewritten or redistributed without permission.

Syracuse grappling with injuries as it slides in the ACC

SYRACUSE — Syracuse is struggling in this most difficult of seasons as injuries pile up and inexperienced players fill lineup holes where needed.

Duke running back Mataeo Durant is tackled short of the goal line by Syracuse's Cam Jonas Saturday at the Carrier Dome.

Syracuse quarterback Tommy DeVito is helped off the field against Duke Saturday at the Carrier Dome.

Syracuse tight end Luke Benson runs for a touchdown against Duke Saturday at the Carrier Dome.