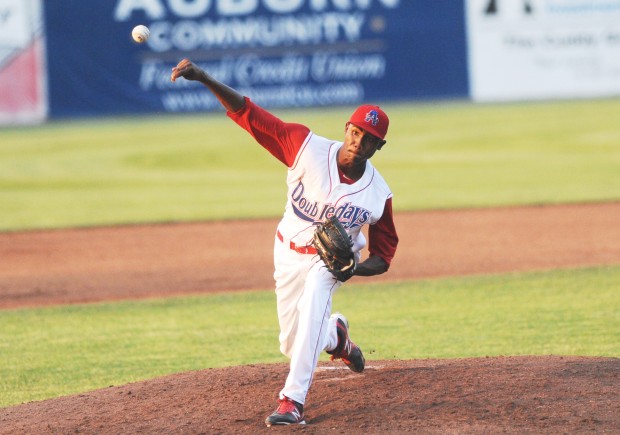 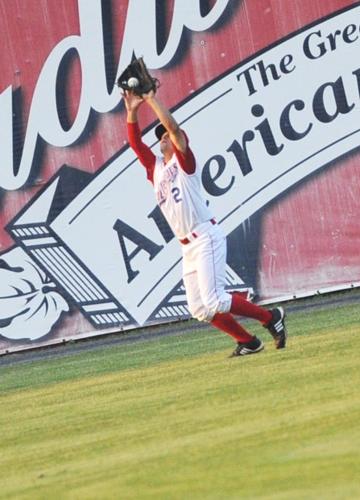 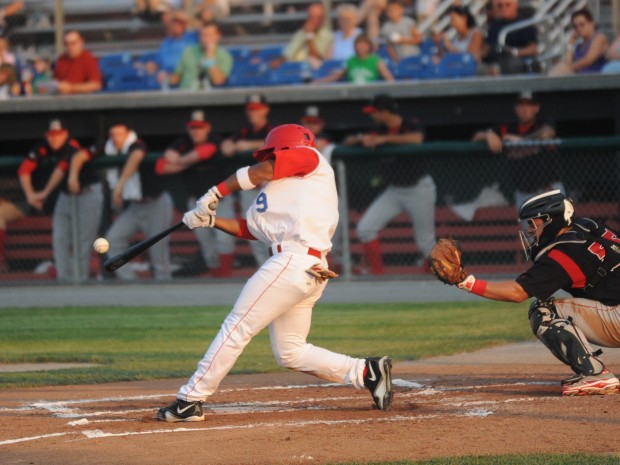 Auburn Doubledays' Khayyan Norfork gets a hit in the second inning against the Batavia Muckdogs Thursday night at Falcon Park. 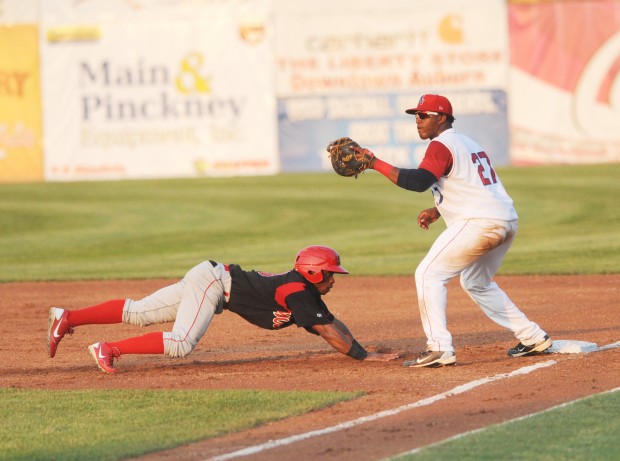 The Doubledays' Estarlin Martinez, right, waits for the ball to tag out the Muckdogs' Leandro Mateo who is safe at first after trying to steal second in the third inning Thursday at Falcon Park.

After Batavia grabbed the lead in the top of the eleventh inning with a pair of doubles by Anthony Melchionda and Steve Ramos, the Auburn Doubledays picked up a pair of runs in the bottom of the eleventh for their first walk-off win of the young season Thursday night at Falcon Park.

Jordan Poole led off with a double and scored on a short single to right by Stephen Perez. The throw was up the line on Poole and he was able to juke his way past the catcher much to the chagrin of Batavia manager Dann Biardello who was ejected for arguing the call.

Perez moved all the way around to third during the argument on the field, but was placed back at second. He moved up on an error and scored on a single up the middle by Craig Manuel who came in as a defensive replacement in the top of the tenth.

A solo home run by Muckdogs centerfielder Matthew Young with two outs in the top of the eighth inning knotted the score with the Doubledays at four Thursday.

The Muckdogs got off to a 1-0 lead in the second inning when David Washington hit a double to drive in Jesus Montero, and the Doubledays wasted no time giving a response.

Auburn with three runs of their own.

Estarlin Martinez worked a walk, stole second and then moved to third when Jordan Poole reached on an error. Carlos Lopez then drove in both runners on a double off the wall.

Stephen Perez then singled down the first base line to bring in Lopez.

Batavia would battle back in the top of the fourth, with Anthony Melchionda and Matthew Young each driving in a run. Both were unearned after an error on third baseman Carlos Lopez.

After singling to get on base in the sixth inning, Lopez rounded the bases on an error on Batavia shortstop Melchionda and narrowly avoided the tag by catcher Jesus Montero.

The Doubledays held the lead until Young's solo home run in the top of the eighth.

Auburn starter Pedro Encarnacion went 4 1-3 innings, the longest outing by a starter this season, allowing five hits and three runs, two of which were earned. He walked three and struck out two.

Lefty Elliott Waterman came on in relief, allowing just one hit over 1 2-3 innings.

Auburn reliever David Fischer came in for the seventh and eighth inning, striking out three and giving up two hits, including the game-tying home run.

Cody Davis took over in the ninth inning, and through two innings of work he struck out five of the six batters he faced.

For the Muckdogs, starter Daniel Bibona went three innings, allowing four hits and three runs -- two earned. He was lifted for Brandon Creath, who allowed no hits in two innings of work.

Cory Baker then took over on the mound, who allowed just one hit over three innings. Yunier Castillo entered in the ninth inning, and pitched two innings of one-hit ball.

After the game, the Doubledays will travel to Williamsport today for the first of a three game set.

Auburn Doubledays' Khayyan Norfork gets a hit in the second inning against the Batavia Muckdogs Thursday night at Falcon Park.

The Doubledays' Estarlin Martinez, right, waits for the ball to tag out the Muckdogs' Leandro Mateo who is safe at first after trying to steal second in the third inning Thursday at Falcon Park.