It was just three years ago but feels a lot longer that the Syracuse University football team won 10 games and a bowl. Fans clamored for Dino Babers to be signed to a contract extension so another program wouldn't snatch the up-and-coming coach.

There's plenty of blame to be assigned but lets start with Babers, who has gone from hot coaching prospect to possibly being on the hot seat.

Babers opened his introductory press conference in 2016 with a vision of a high-powered offense thrilling a sold out Carrier Dome. You had to be impressed, every new coach wants to make a good first impression with the fans and Babers got Orange fans excited.

And with senior QB Eric Dungey, the Orange had a pretty good offense.

But Babers didn't find an adequate successor to Dungey and the Orange offense has sputtered like an old sports car in desperate need of an engine overhaul.

Tommy DeVito was supposed to pick up the reins and keep the offense humming. Instead he's been inconsistent, injured and the offense has sputtered. DeVito lost his job to transfer Garett Shrader and on Sunday night, left the program by entering the NCAA's transfer portal.

DeVito is the sixth Orange player to enter the portal this year, more than any other D1 program, which makes you wonder why these players want out. Is it Babers? The losing? A chance to play more elsewhere? SU isn't the only school to see players transfer, it's more a sign of the times. But still, if the Orange were a better program, would they be staying?

There have been other issues, Syracuse's defense was horrible in 2019, resulting in an in-season dismissal of the defensive coordinator. Of course COVID-19 opt-outs and a bad offensive line were some of the reasons why SU only won a single game in 2020.

At least this season running back Sean Tucker has been a bright spot, rushing for over 100 yards in five straight games, tying the program record and almost single-handedly lifting the offense. But that's it. Shrader isn't putting up big numbers.

Syracuse has lost its last three games by three points each, two of them on the last play of the game and last week's loss to Clemson on a missed field goal. Instead of being 3-4, Syracuse could be 6-1, with bowl berth in hand and a good chance to make noise in the ACC Atlantic race.

Babers has not helped himself in those losses, making some questionable decisions and suffering from poor clock management. I'm not going to debate all of them here but I have to mention what happened at the end of the Clemson game. Facing a fourth-and-1, Babers decided to try a 48-yard field goal instead of having the 6-foot, 4 inch, 230-pound Shrader try a QB sneak to pick up a first down.

I get what Babers is thinking. Szymt is one of the best kickers in college football and he should make a 48-yarder but the Orange had more time to get closer making the field goal easier. And the hold wasn't solid, the laces were out, which may have affected Szymt's kick.

At 3-4, Syracuse needs to win three of its last five games to become bowl eligible. Syracuse's three wins have come against Ohio, Albany and Liberty, not exactly what you would call powerhouse programs. Three of the upcoming games are on the road, and two against current ranked teams (NC State and Pitt).

It's easy to say the Orange could finish 3-9 or 4-8. And if this happens, there will be more pressure on Syracuse athletic director John Wildhack to fire Babers. But Wildhack may not be to do it because he may not be able to afford the buyout which could be millions of dollars. We have no idea what the buyout is or how long Babers' contract lasts.

Does Syracuse have enough deep-pocket boosters to buy out Dino and cough up the cash to bring in a new coach? A big-name coach won't likely want to come to Syracuse which leaves the Orange again looking for a new guy looking to use it as a stepping stone to a better job.

To be honest, I can only think of one coach who could make the Syracuse football program respectable.

And he's done it before.

Yes, I am talking about Doug "Dream Job" Marrone. First, he's available, since he was fired by Jacksonville, and he should be cheaper since he's being paid by the Jags for another year or two. Second, he's the best coach SU has had since firing Paul Pasqualoni (which really isn't saying much). Third, he can actually recruit the Northeast, especially the New York City/New Jersey area.

If Greg Schiano can come back to Rutgers, there's no reason why Marrone couldn't return to Syracuse.

Syracuse may be stuck with Babers for another year since it may not be able to afford to fire him but unless something dramatically changes in 2022, they're going to have to do something eventually. The thousands of empty seats in the Carrier Dome show how apathetic the community is about football.

If Wildhack wants to keep SU football from becoming even more of an ACC afterthought, he needs to do something, sooner than later.

Babers has a great personality and that helps sell a program but ultimately a coach is judged on their record and in that regard, Babers may have to go.

EAST RUTHERFORD, N.J. — All the hope Joe Judge generated with a strong second-half finish to his rookie season as New York Giants coach is gone.

Somber Bills seek urgency to turn around from recent slump

ORCHARD PARK — With things going from bad to worse, the Buffalo Bills don't have much time to regroup ahead of their next game.

Syracuse RB Tucker believes he'll be back in 2022

ORCHARD PARK — The Buffalo Bills righted their ship, at least momentarily, with a rousing 31-6 victory over the Saints on Thanksgiving night i…

ORCHARD PARK — Jonathan Taylor set a franchise record by scoring five times, and took over the NFL lead in both yards rushing and touchdowns, …

Facing a team ravaged by injuries, the Bills handled the New Orleans Saints from start to finish in a 31-6 victory at the Superdome.

Follow the Buffalo News' live coverage as the Bills face the Colts in Highmark Stadium in Orchard Park.

NEW ORLEANS (AP) — Very little has come easy for the New Orleans Saints this season, particularly in the Superdome, where they've lost twice a…

EAST RUTHERFORD, N.J. (AP) — For a team not in the same division, New York Giants quarterback Daniel Jones has seen more than his share of the… 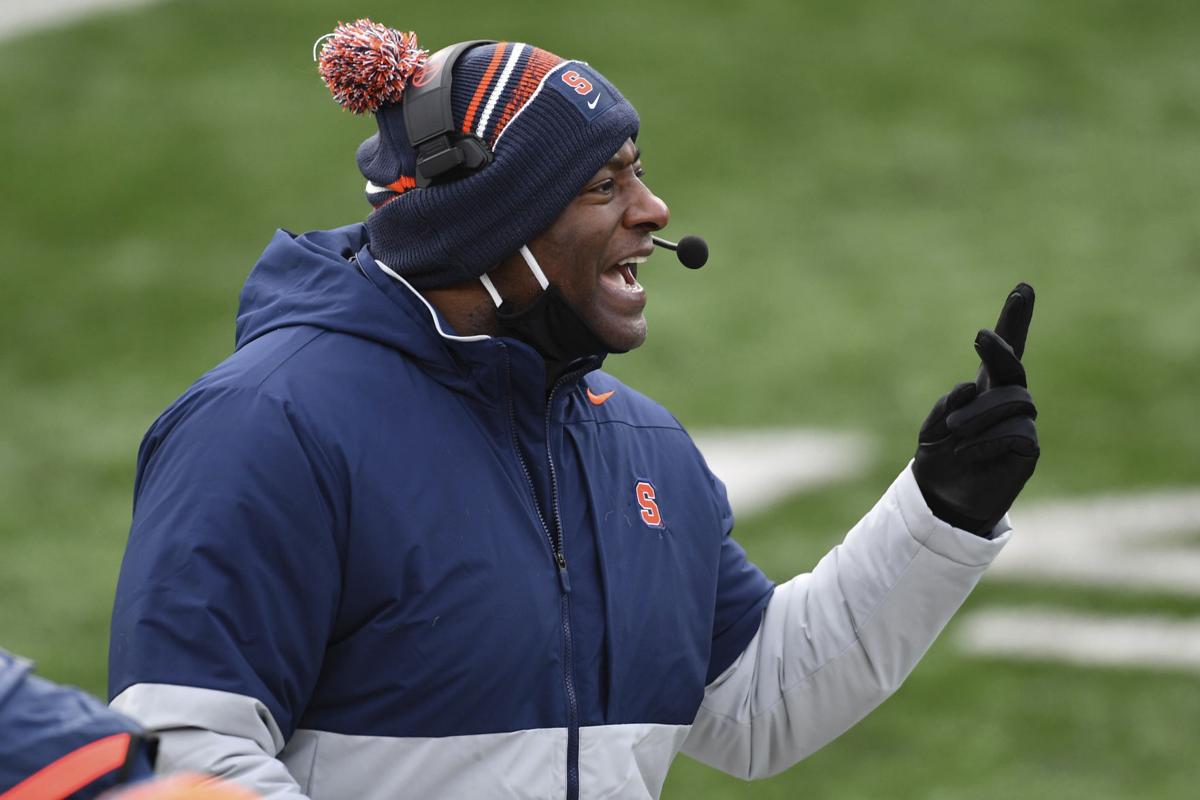 Syracuse coach Dino Babers yells to his players during a game against Notre Dame Dec. 5, 2020 in South Bend, Ind.