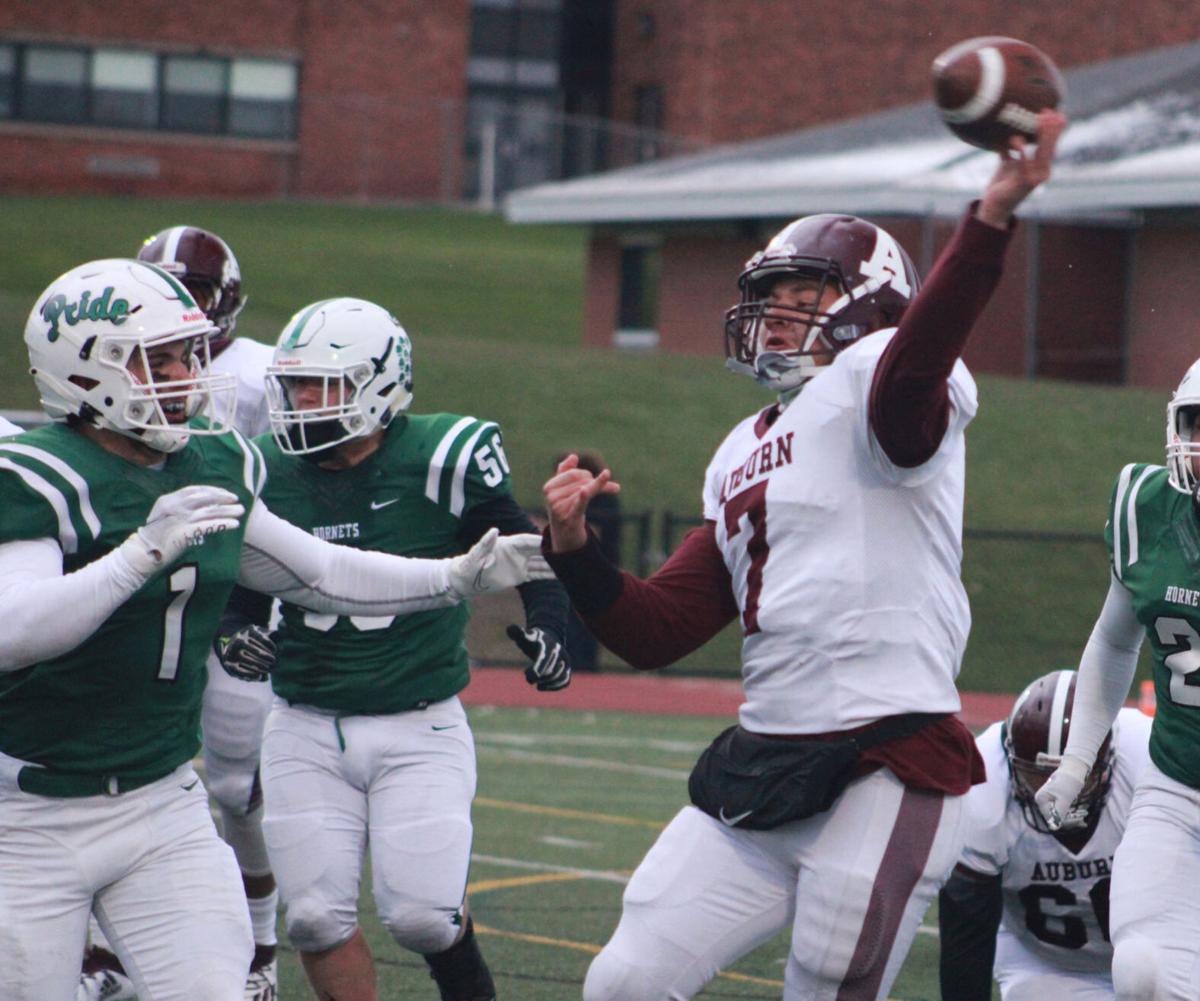 Auburn's Troy Churney throws a pass against Fayetteville-Manlius on Wednesday. 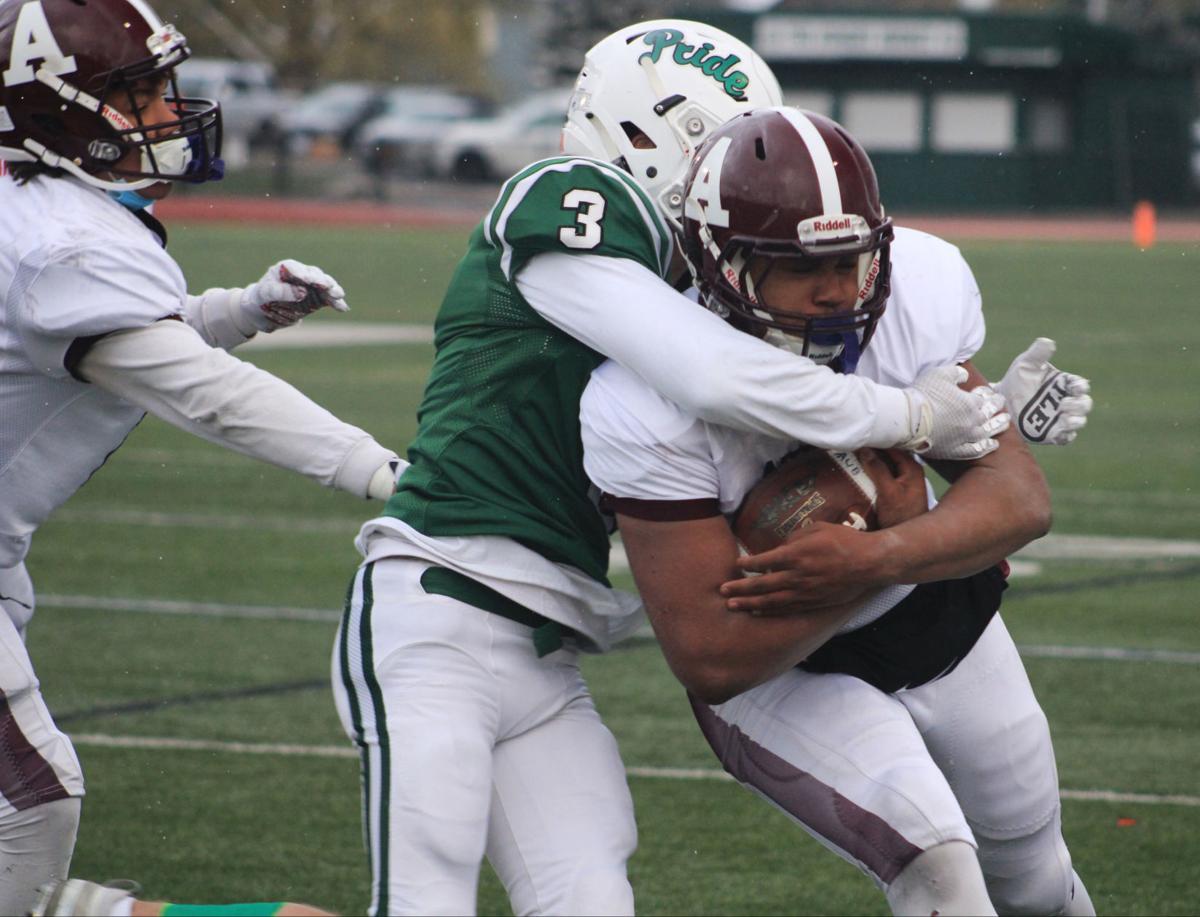 Auburn's Eli Benson carries the ball against Fayetteville-Manlius on Wednesday.

FAYETTEVILLE — Auburn's 2020-21 football team will be known as the team that impossibly, improbably, and incredibly finished undefeated.

It took three overtimes, but the Maroons accomplished something on Wednesday at Fayetteville-Manlius not done by the Auburn football program since 1975. Auburn beat the Hornets 50-49 to complete a 5-0 season.

"So many times this season we had our backs against the wall or got ourselves into a jam," Maroons coach Dave Moskov said. "We got out of it because of how these kids prepared during this long, long offseason.

"Even when they make mistakes and get in a hole, they battle back."

Several times during the fourth quarter and college-style overtime, it looked as though a perfect season would slip through the Maroons' fingers. F-M tied the score at 28-28 early in the fourth quarter, and while both teams had an opportunity at game-winning drives, neither could seal the deal.

Auburn was in a particularly precarious situation in the final minute. The Maroons' final offensive drive of regulation ended on an interception by the Hornets at their own 20 yard line. After the turnover, F-M needed only two plays to advance 79 yards to Auburn's 1. The Hornets couldn't punch it in though, as Auburn forced a fumble that sent the game to overtime.

Section III high school football's overtime rules mimic college football. Each team has at least one possession that begins at the opposing team's 20 yard line with a first-and-10. Who kicks extra points versus who converts two-pointers also becomes critical.

F-M started overtime with the ball first and scored, but missed the extra point. Auburn answered with an Eli Benson touchdown, but similarly missed the kick, continuing the game.

Both teams scored again in the second overtime — Auburn went first — and this time, both scored on two-pointers, bringing the score to 42-42.

F-M needed only a couple plays to reach the end zone to start the third overtime, and the Hornets elected to kick the extra point again. This time, it was good.

Facing a fourth down on its third possession of overtime, quarterback Troy Churney connected with DeSean Strachan for a touchdown.

Instead of trying to force a fourth overtime by kicking the extra point, Auburn went for two points and the win. Churney called his own number, driving into the end zone on a sneak from the 1, delivering the Maroons the undefeated season.

"Troy said, 'I can get that ball in the end zone.' For him to step up and get that winning conversion, you couldn't envision a better ending for us," Moskov said. "We ran every play in the playbook that we had, and our defense was certainly struggling (in overtime). Once they kicked the extra point, we knew we'd go for the two-point conversion."

Offensively, Churney finished 24-of-29 for 152 yards, three touchdowns and one interception. He also ran for 50 yards. Benson was the team's leading rusher with 146 yards and three touchdowns. Strachan finished with 12 catches for 127 yards and two scores. Mekhi Bailey had one reception, but made it count for a 12-yard touchdown.

Maybe Auburn should consider changing its name from Maroons to Comeback Kids. In three of its wins this season, Auburn trailed by at least a point in the second half. That includes a one-score deficit in the third quarter against the Hornets.

Earlier victories included a 14-0 hole last Saturday against Christian Brothers Academy, and a 15-14 deficit to West Genesee in the second half of the season opener.

While Auburn will soak in its undefeated season, it won't be long until Moskov and his coaching staff are back at work. The longtime Maroons coach said he normally takes two weeks off before preparation begins for the following season.

That's under normal circumstances though, for seasons that end in November. The next fall season is only four months away, and Moskov knows he'll have a young group of returners eager to get back in the weight room.

What he'll remember most about his current players is how his team battled through adversity and tried to prepare even in the most dire circumstances.

"The shutdown was brutal, and there were times when the kids were really struggling," Moskov said. "We did so much interpersonal work with these kids over the last year, and we really got to know them. Sometimes things were rough, sometimes things were great, but all we kept talking about was the journey.

"One last step of the journey was tonight, and the way it finished, you can't make it up."

What was the craziest story in sports yesterday?

Will we see Max Scherzer traded?

Will we see Max Scherzer traded?

How may players on the Cubs will be traded before the deadline?

How may players on the Cubs will be traded before the deadline?

At its April 27 meeting, the Auburn Enlarged City School District honored its high school football team for completing its season with a perfe…

State Assemblyman John Lemondes visited with the Auburn High School football team Thursday at Holland Stadium. He presented the team and the c…

Auburn's Troy Churney throws a pass against Fayetteville-Manlius on Wednesday.

Auburn's Eli Benson carries the ball against Fayetteville-Manlius on Wednesday.