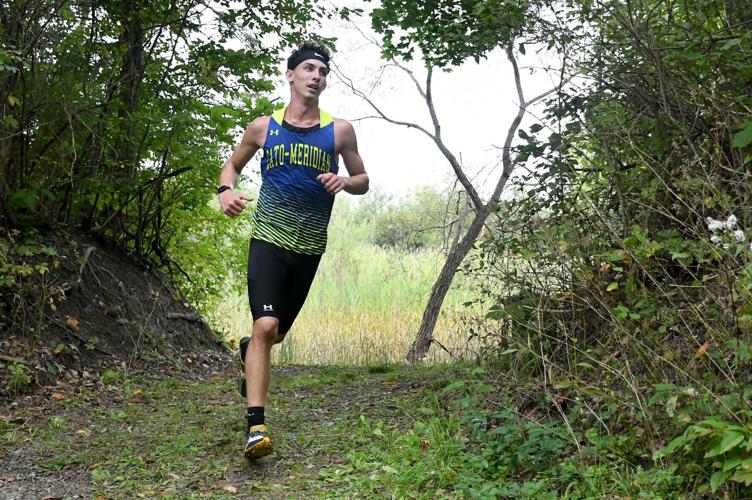 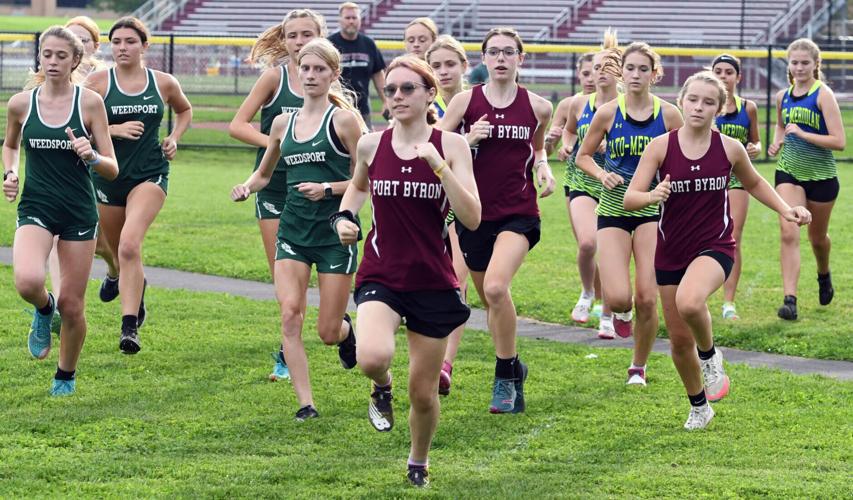 PORT BYRON — It was a successful outing for the Cato-Meridian boys and girls cross country teams on Wednesday.

Competing in a tri-meet at Port Byron against the host Panthers and Weedsport, the Blue Devils claimed first place in both races and also earned a pair of sweeps.

The Blue Devils' Merritt Cox was the first boys finisher by over a minute-and-a-half. His time of 18:49 topped Weedsport's Evan Pollino's mark of 20:23.

The Blue Devils also boasted three of the top five times in the girls race, which was won by Maggie Brown (21:45). Teammate Alayna Williams was next for second place (22:29), while Julia Williams finished in 24:36 for fifth.

This fall marks the second year that Port Byron is able to compete at its home course again. Capital projects geared toward the school district's athlete fields prompted a temporary move to Montezuma for the Panthers' home races in 2020.

The new course is not drastically different than its pre-2020 version. Runners begin in the space between the track and varsity baseball field, trek through the baseball field's foul territory, then travel multiple loops in the trails behind Dana West High School.

Panthers coach Mike Hermann admitted that the school's course is "not the most spectator-friendly," but the current alignment beats the previous one in that sense. It's also now stretched out to a true 5K.

"Before the capital project was finished, you only saw the runners for the first 400 meters. Then they went into the trail and you really never saw them again," Hermann said. "This way, at least we see them more. The trail itself is terrific. I wouldn't say it's any more challenging, other than it's a little longer.

"I was always a little resistant to changing the course. Once you set a course, you want people to be able to say, 'I ran this time at that course.'"

Speaking about his own team, Hermann said he's enjoyed the unique personalities that gather to compete in cross country. He complimented them on their ability to "take care of their business" both in the classroom and in the field of competition.

"They're great kids. They work hard and are getting better," Hermann said. "Wherever you start the season, we want them to get better and make progress as the season goes by. When they sign up, I promise them that they're gonna get stronger, get faster, have more endurance and feel way more self-confident if you stick with it. So far, so good."

It's still a relatively young cross country season, as teams won't gather for league meets for roughly another month. In the meantime, there's plenty of dual meets and invitationals for the runners to look forward to.

Hermann pointed out two that his team has it eyes on. The first comes this weekend, as the Panthers will compete in the Baldwinsville Invitational on Saturday.

Then on a Friday in early October, Port Byron heads to the Chittenango Invitational for a rare night race.

"B'ville is just so well run. It's 60-plus years they've been doing this. The kids love the course because in some ways it's similar to this course. It's flat and it's fast, and it's a little on the short side so the kids love it for that," Hermann said. "The competition is great. You know when you look down the line, you're gonna have 150 kids, maybe 200 kids. That's really where it's at for cross country, when the kids are out there and have to endure this shared pain. There's an appreciation for it."