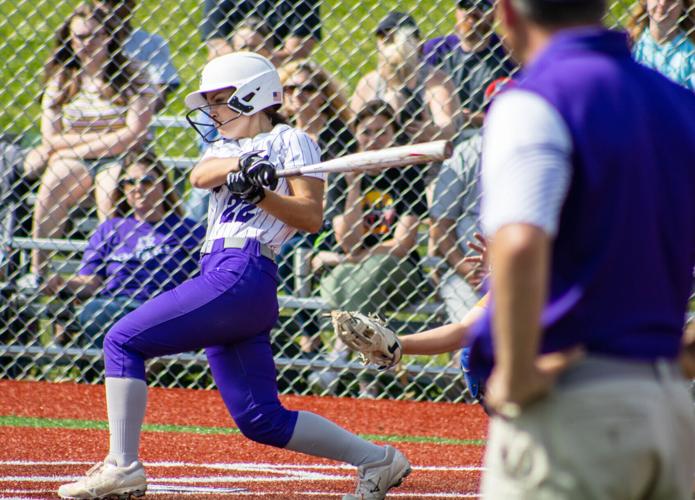 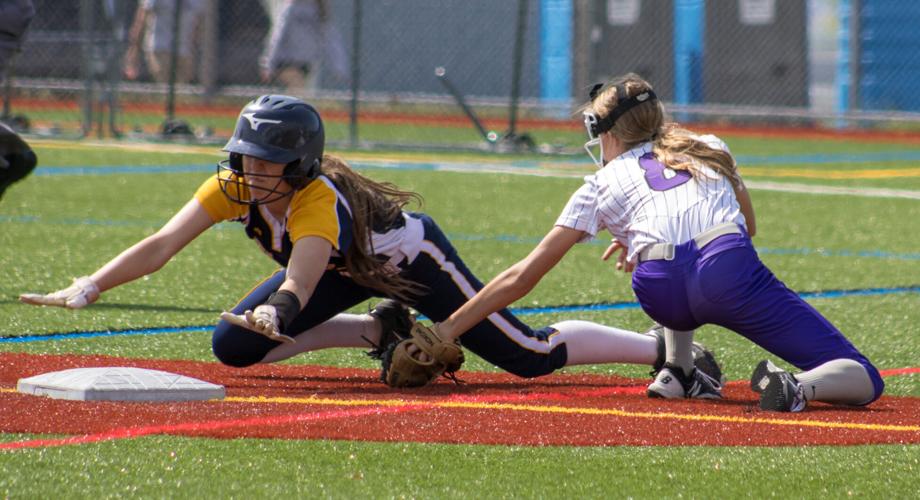 Union Springs' Ella Johnson tags out a Tioga runner at second base Tuesday at Wells College during the Section IV Class C quarterfinals.

AURORA — In the section quarterfinals, Union Springs softball was hoping for a repeat of this year's IAC championship.

Instead, it was a repeat of last year's.

The Wolves fell to Tioga 6-2 on Tuesday at Wells College in the Section IV Class C quarterfinals, roughly two weeks after Union Springs shut out the Tigers in the small school division championship game on the same field.

Tioga has proven to be a thorn in the Wolves' side. Despite being the lower seed — the Tigers were seventh while Union Springs was second — Tioga jumped out to a 6-0 lead in the top of the first inning.

It was a touch of deja vu from the 2021 IAC championship, which Tioga started the game with nine runs in the first inning en route to a win over the Wolves.

Considering the teams' last meeting, which ended with Union Springs claiming its first IAC title in over 40 years, there was a strong sense of hope that the Wolves could duplicate the performance.

Instead, Tioga earned its redemption.

"It seems like every time we get this Tioga draw — we thought with the No. 2 seed we might see a different team, but we ended up facing them again," Union Springs coach Jim Bona said. "I told the girls that sometimes the devil you know is better than the devil you don't, and that's how we approached today."

Erase the first inning and Union Springs is likely moving on to the section semifinals. Starting pitcher Hailee Smith held the Tigers to six baserunners across the final six innings (three singles, two errors and a walk).

A tough first inning ultimately victimized the Wolves' chances. Union Springs was charged with four errors in the opening frame, which allowed six runs to score.

"When you get to this level, it only takes a couple of mistakes to be the difference from winning and losing," Bona said. "Unfortunately that happened for us in the first inning.

"A lot of other teams would've maybe given up and pitched the tent and got out of here, but we played strong. With our bats, we're always in the game. They gave themselves an opportunity."

Bona did not believe that six runs was an insurmountable difference. However, Tioga held the Wolves hitless through the first three innings, not coughing up a baserunner until Ella Johnson led off the fourth with a single before she was ultimately stranded.

In the fifth, the Wolves again led off with a single as Katelyn Herrling started things off. She'd later come around to score on a ground ball from Bella Tracey.

Union Springs chipped away some more in the sixth when Ava Dennis' groundout scored Johnson.

Needing fourth runs in the seventh to force extra innings, the Wolves went down in order. A typically potent offense was limited to five hits — all singles.

"We didn't hit the ball nearly as well as we did against them a few weeks ago," Bona said. "We had 11 hits that day. Today they played a shift on us, which is the benefit of having scouted us the first game. They saw where we hit it."

Despite Tuesday's setback, the Wolves are holding their heads high. The IAC victory was decades in the making, while the 14-1 regular season record stacks up against anyone.

Even better for Bona: He returns his entire roster save for one senior, Angelia Scholz. The amount of returners will be a major benefit for him, as Bona can build off his players current strengths and weaknesses.

"We had a fantastic year, and everyone is coming back so we should be able to have another good year next year," Bona said. "We were undefeated against Section IV teams during the regular season, which is hard to do. It's a good section for Class C softball. They have a lot to be proud of."

Union Springs' Ella Johnson tags out a Tioga runner at second base Tuesday at Wells College during the Section IV Class C quarterfinals.