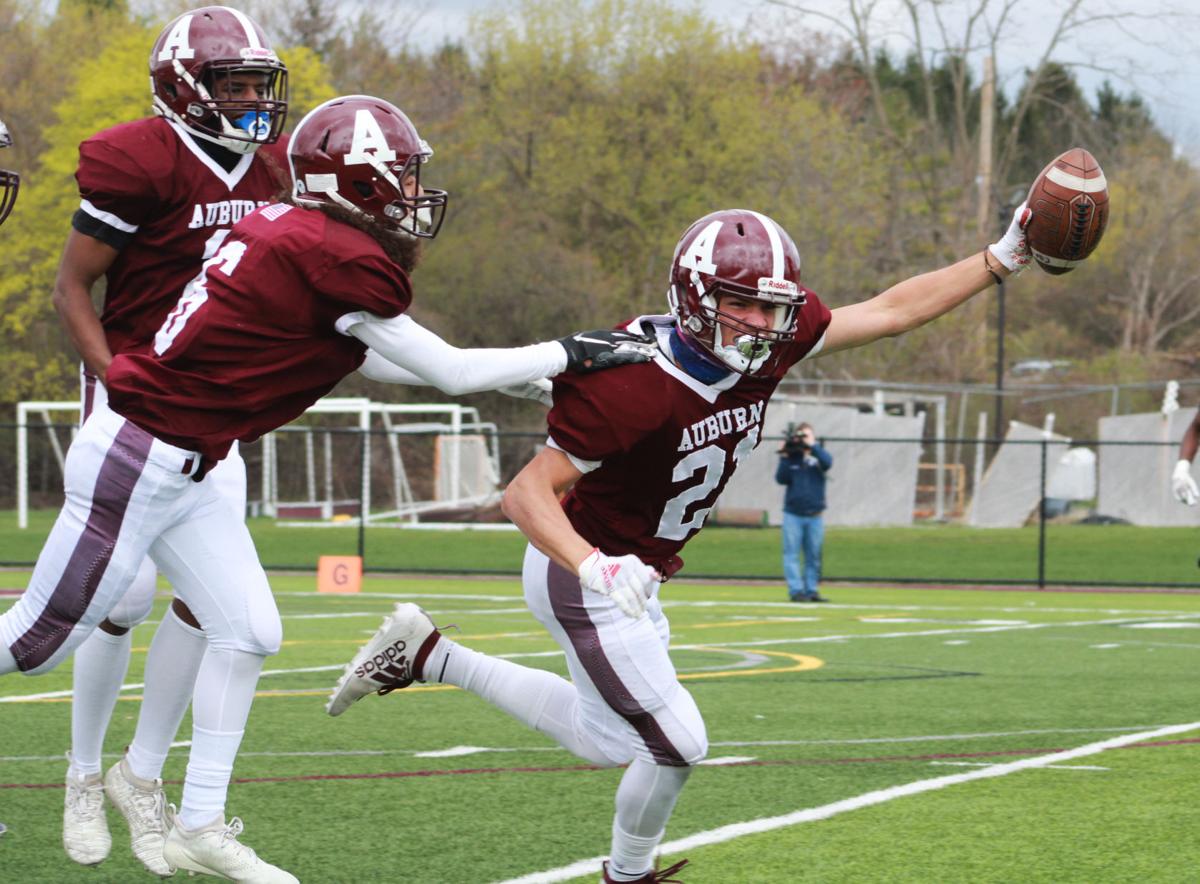 Auburn's Isaiah Parkman holds up the ball to signal his interception against Christian Brothers Academy Saturday at Holland Stadium. 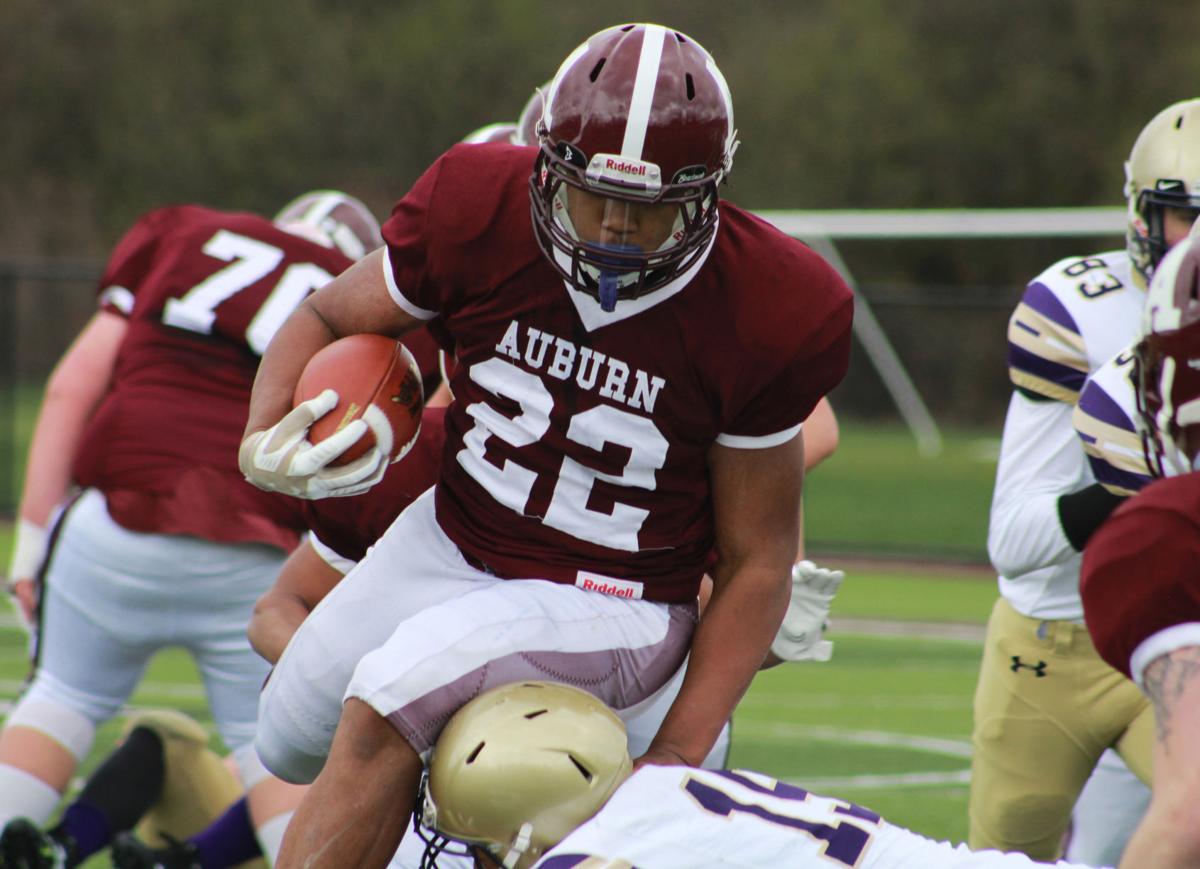 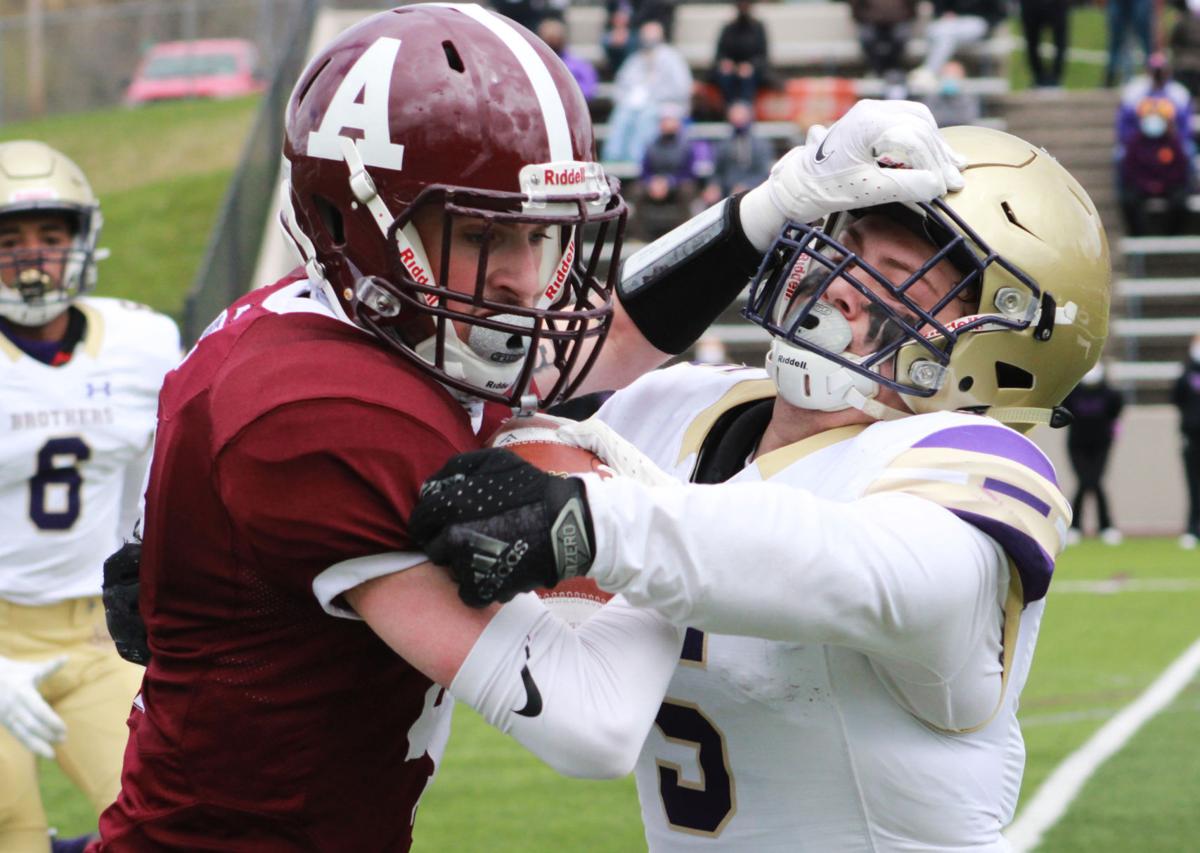 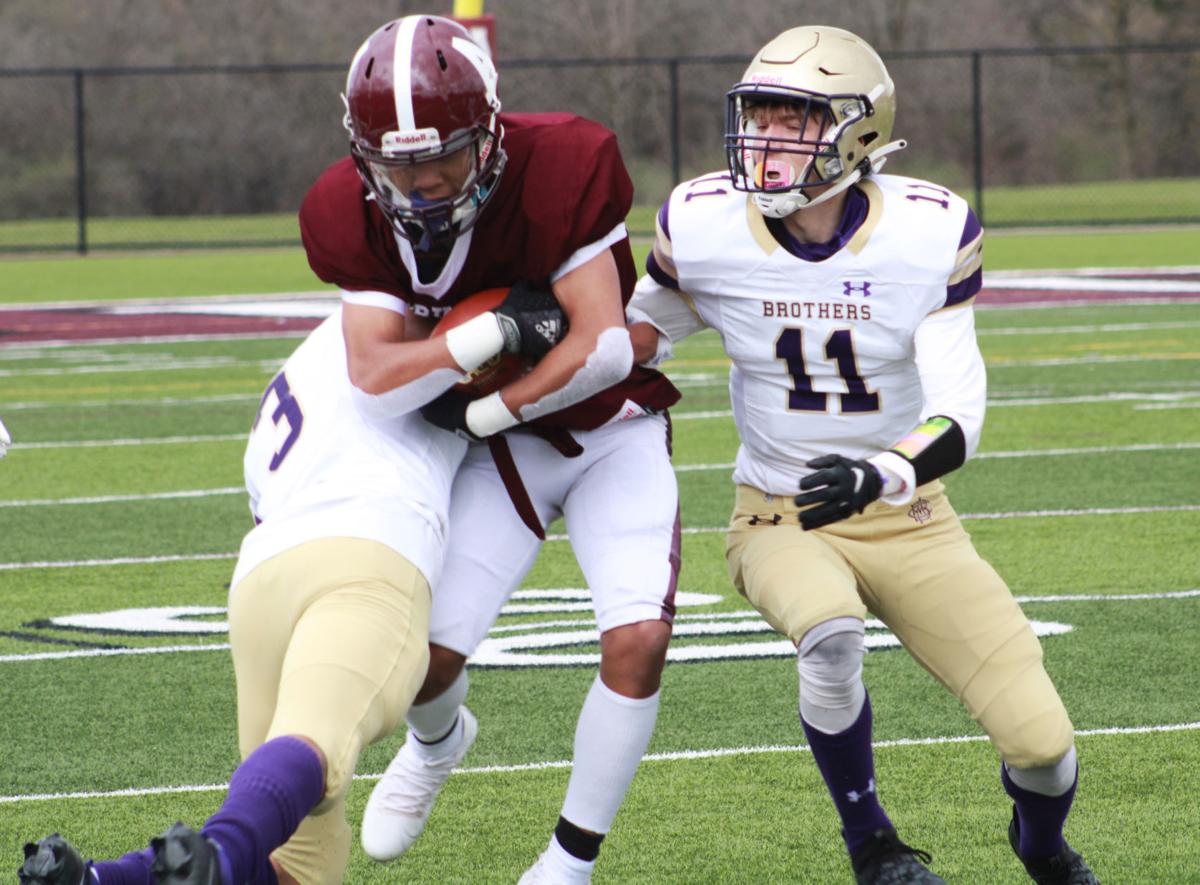 AUBURN — Unable to compete for its second state title in program history, Auburn football's goals have changed for its unique current season.

Like teams of yesteryear, the priority is to be perfect. Unbeaten. Untarnished.

Auburn is now only a win away from meeting that goal.

After trailing by two touchdowns in the first quarter, the Maroons fought back to defeat Christian Brothers Academy 20-14 Saturday at Holland Stadium.

Auburn was behind for almost the entirety of the game, but finally took the lead when quarterback Troy Churney connected with Zach Galbally for a 34-yard score with only 53 seconds to go.

CBA advanced all the way to Auburn's 27-yard line in its attempt to steal back the win, but the Brothers' final pass attempt as time expired was knocked to the turf in the end zone by cornerback Demetrius Herndon.

In a season disrupted and delayed by COVID-19, a dramatic win was just what the doctor ordered.

"This is about what the kids did during the offseason," coach Dave Moskov said after the game. "These kids took literally one week off during Thanksgiving after starting in June. We were practicing in parking lots, lifting at (Swagler Strength and Performance), just doing everything that we could legally do.

"It's shown these four games. These guys are resilient, they're tough, and they've been showing it throughout this entire shutdown."

Galbally showed off his athleticism on the winning touchdown, tip-toeing down the right sideline before squirming around the pylon. The play was also redemption for a gaffe earlier in the game.

During the second quarter with Auburn down 14-6 and driving for the potential tying score, the Maroons ran a receiver option from midfield. Churney pitched the ball to DeSean Strachan, who tossed a completion to Galbally that would've brought the Maroons within 15 yards of the end zone.

But in his effort to fight for more yards, Galbally had the ball stripped from his grasp, turning possession over to CBA.

Told by teammates and coaches alike that he'd have another opportunity to make a play, Galbally made good on that faith.

"Zach made a great catch earlier but they ripped it right from him. We've been best friends since we were young and I kept my confidence in him," Churney said. "I threw it up to him and he scored a touchdown. Coach preaches to us about adversity. (Galbally) was on the team during our comeback against Indian River last year. He got through it, he made the play and I'm proud of him."

Auburn's chances looked bleak through most of the first quarter. CBA turned both of its first two possessions into touchdowns, while Auburn's offense countered by stubbing its toe with missed assignments and penalties.

It took major collision by Churney to turn the tide. The team's quarterback on offense, he also mans the safety position on defense. Late in the opening frame, CBA had the ball at midfield and ran a play that called for a quick throw to 6-foot-5, 260-pound tight end Kamren Harris.

As CBA snapped the ball, Churney identified the play and — despite giving up about 50 pounds — delivered a booming hit that sent Harris and the football to the turf, allowing linebacker Jeremiah Phillips to make the recovery.

Churney's ability to make the play stems from Thursday's film study with defensive coach Matt Moskov, who pointed out the Brothers' penchant for running a "tight end pop pass."

"We ran it one or two times in practice. They came into that formation and I was there," Churney said. "We needed the ball and someone had to make a play. It was just me versus him, and I chose me."

Afraid to let the game slip away, CBA drove all the way down to Auburn's 1 following a 59-yard pass from quarterback Jordan Rae to Jack Szatkowski late in the third.

Unlike the opening quarter, the Maroons' defense bent, but didn't break. Auburn stuffed a pair of runs, then two CBA passes fell incomplete to force a turnover on downs and keep the Maroons within a score.

Auburn waited until the literal last minute for that score, but Galbally's touchdown put the Maroons in front for the first time all game. CBA's last drive started at its own 44 and advanced as far as Auburn's 27 as the seconds ticked down.

The Brothers' final two plays were pass attempts into the end zone. One was defended by Strachan, the other by Herndon to end the game.

Auburn's defense finished with two turnovers — Isaiah Parkman recorded an interception to go with Phillips' fumble recovery — and two stops deep on its own territory.

"We gave up some big plays and had bad field position a lot, but we're just a tough defense," Dave Moskov said. "All season long they've been very aggressive and changed the line of scrimmage. That was huge for us today."

It'll be a quick turnaround to Auburn's next game, as the Maroons are scheduled to travel to Fayetteville-Manlius for a rare Wednesday tilt. The fifth and final contest of the season, Auburn hopes its desire to be perfect comes to fruition.

"Our goal every year is to win the state title. We can't win the state title this year, so back in the beginning of the season our goal was to go undefeated, because that's all we can do," Moskov said. "It's been a long time since we've had an undefeated team. It's a different season, but never have we worked so hard to field a team as we did this season.

"To go 5-0 would be a huge accomplishment, just thinking of what these kids have been through the last year."

Who has the edge in the NL Wildcard race?

What to expect with Justin Fields at the helm

What to expect with Justin Fields at the helm

Auburn's Isaiah Parkman holds up the ball to signal his interception against Christian Brothers Academy Saturday at Holland Stadium.