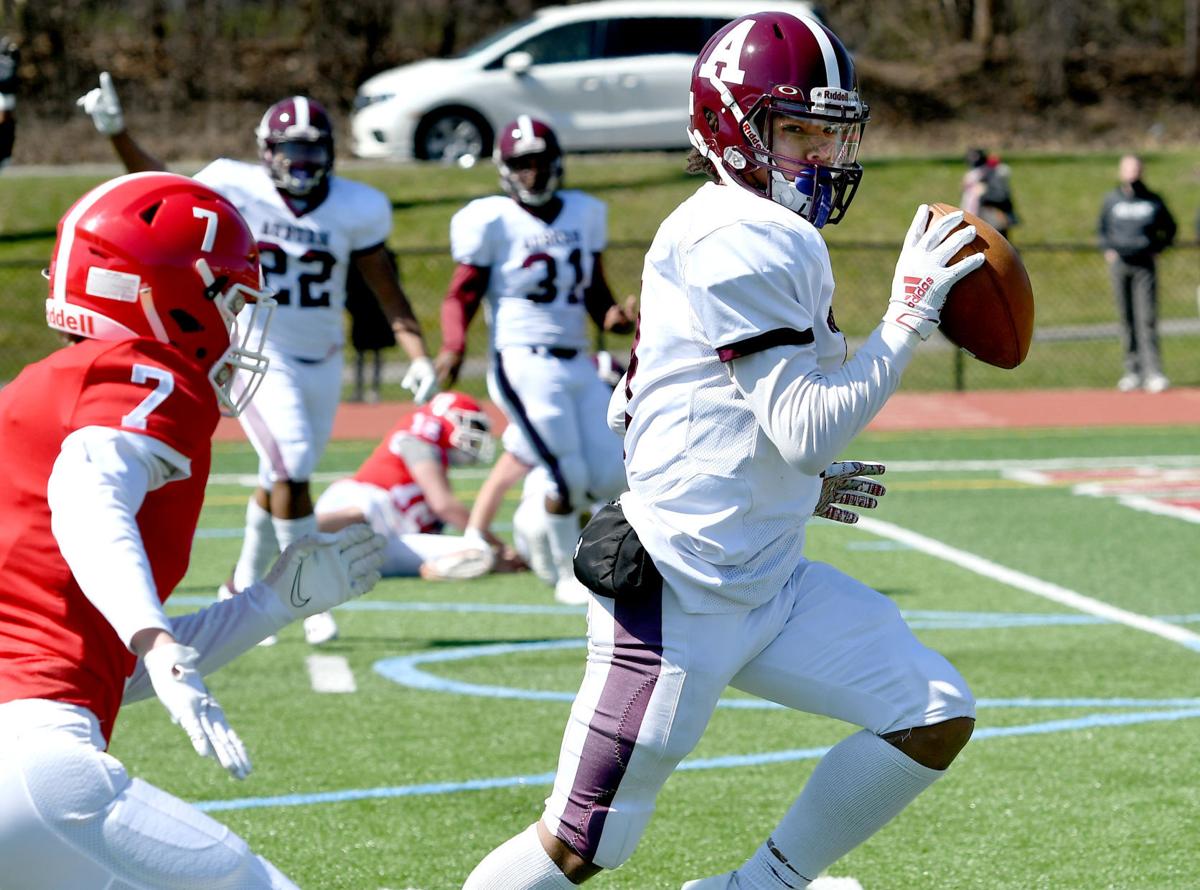 Auburn's DeSean Strachan scores on a pick-6 against Jamesville-DeWitt Saturday. 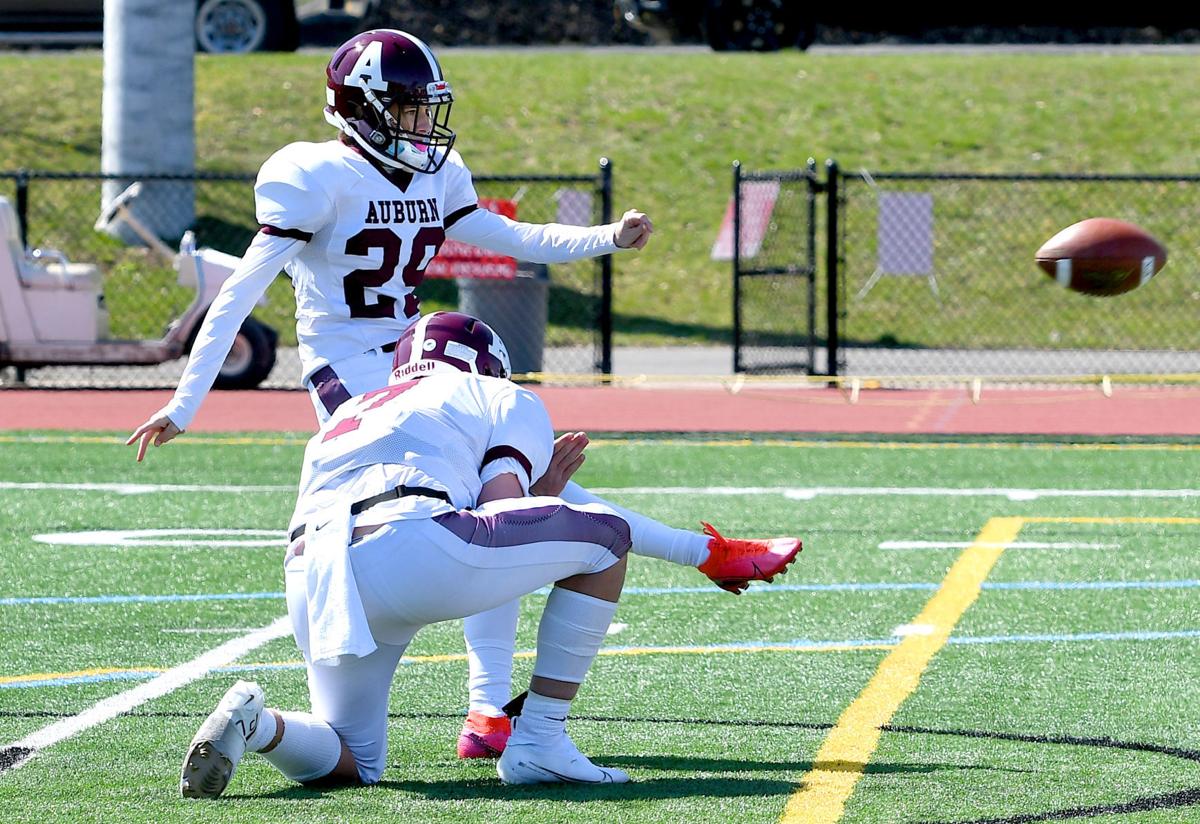 Auburn kicker Amelia Bartolotta boots her first extra point of her career against Jamesville-DeWitt in high school football Saturday. Bartolotta is the first female to ever take a snap on varsity in the 130-year history of the program. 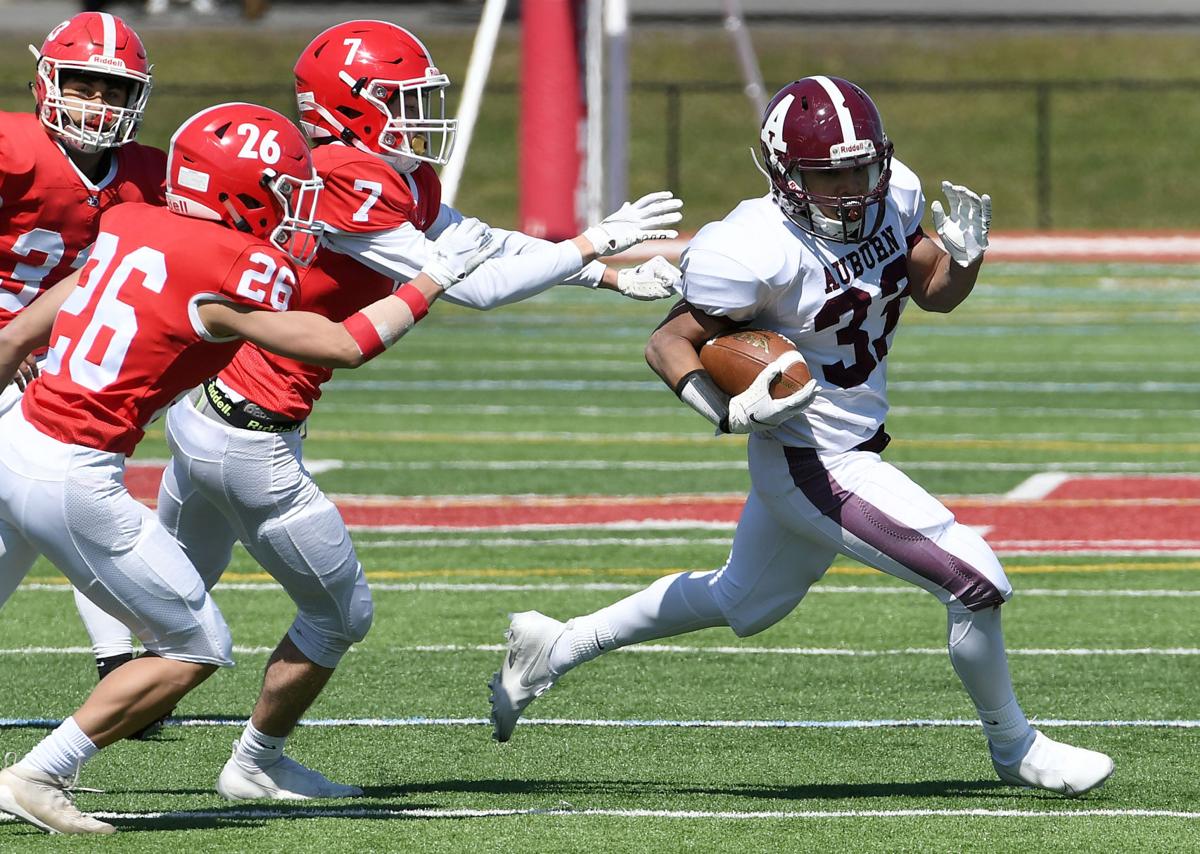 Auburn's Jeremiah Phillips turns the corner on his way to a touchdown against Jamesville-DeWitt in high school football Saturday.

Auburn football is 2-0, thanks to a rare defensive touchdown.

DeSean Strachan stepped in front of a Jamesville-DeWitt pass and returned it 12 yards for a touchdown during the first quarter of Auburn's 55-7 win over the Red Rams on Saturday.

The score put the Maroons ahead 16-0, which was ultimately enough to nab their second win. After J-D scored its first and only touchdown in the second quarter, Auburn reached the end zone six straight times in the blowout win.

Bruising running back Elijah Benson, a sophomore, overwhelmed the J-D defense with 217 yards and two touchdowns on only 13 rushing attempts. Benson averaged 16.7 yards per carry. Benson's banner game included a 78-yard touchdown in the second quarter.

Quarterback Troy Churney was only asked to throw eight passes, but he did score twice, including a run of 25 yards. Davari Agee also reached the end zone twice, totaling 57 yards on seven attempts. Jeremiah Phillips scored Auburn's remaining offensive touchdown, as he finished with 87 yards on five attempts.

Auburn's win was capped off by a contribution from the first female varsity player in program history. Senior Amelia Bartolotta successfully kicked the extra point following Agee's 10-yard touchdown run in the forth quarter, marking the first time a female player has recorded a point for the varsity Maroons.

Auburn looks to remain undefeated on Thursday when the Maroons host Central Square.

In Game 1, the Spartans fell behind by six runs in the first inning. A run-scoring triple from Olivia Maassen and an RBI double by Skyler White put a pair of runs on the board for CCC in the fourth, but the offense couldn't muster any more runs.

White finished 2-for-3, while Taylor Hunter scored a run.

Cayuga took an early lead in Game 2 when leadoff hitter Gabriella Bard scored on a wild pitch and Abigail Marinelli crossed home plate on Kyra Cotrill's groundout. Jefferson countered with four runs of its own in the second, enough to sweep the doubleheader. In the second game, Marinelli finished 2-for-3, while Hunter, Gabriella Hass and Katelyn Stoddard added hits.

CCC (1-4) travels to Corning on Wednesday for a doubleheader.

The Spartans went ahead early in the first game, scoring five runs in the opening inning as Zac Legarretta, Sam Jenkins and Aiden Driscoll-Sadusky all hit triples. Six more runs game in the fifth inning behind doubles from Brendan Williams and Andrew Boglione.

The Cannoneers flipped the script in Game 2, bringing home seven runs in the second inning. Jefferson then tacked on four more in the fourth.

Martinez hit a two-run double in the fourth, but CCC's comeback attempt came up short.

Jake Coleman went 2-for-3 at the plate with three runs, and Tyler Cordway added a two-run triple.

Troy Churney's touchdown pass to Zach Galbally with less than a minute remaining in the fourth quarter propelled Auburn football to a comeback win over CBA on Saturday.

Meeting for the second time in less than three weeks, Southern Cayuga and Marathon were again differentiated by just one goal. This time though, the Chiefs were on the wrong end.

Grayson Brunelle reached the end zone three times to lead Skaneateles football to a 35-14 win over Bishop Ludden on Saturday.

Auburn volleyball battled back from a one-game deficit to defeat Oswego 3-2 on Friday.

'It's all new to us': Moravia football downed by Lansing

Playing in its fourth game as an 8-man program, Moravia football is still working out the kinks. The Blue Devils were downed by Lansing on Saturday.

Weedsport football scored seven of its eight touchdowns on the ground in a season-opening win over Bishop Grimes on Saturday.

Auburn's DeSean Strachan scores on a pick-6 against Jamesville-DeWitt Saturday.

Auburn kicker Amelia Bartolotta boots her first extra point of her career against Jamesville-DeWitt in high school football Saturday. Bartolotta is the first female to ever take a snap on varsity in the 130-year history of the program.

Auburn's Jeremiah Phillips turns the corner on his way to a touchdown against Jamesville-DeWitt in high school football Saturday.