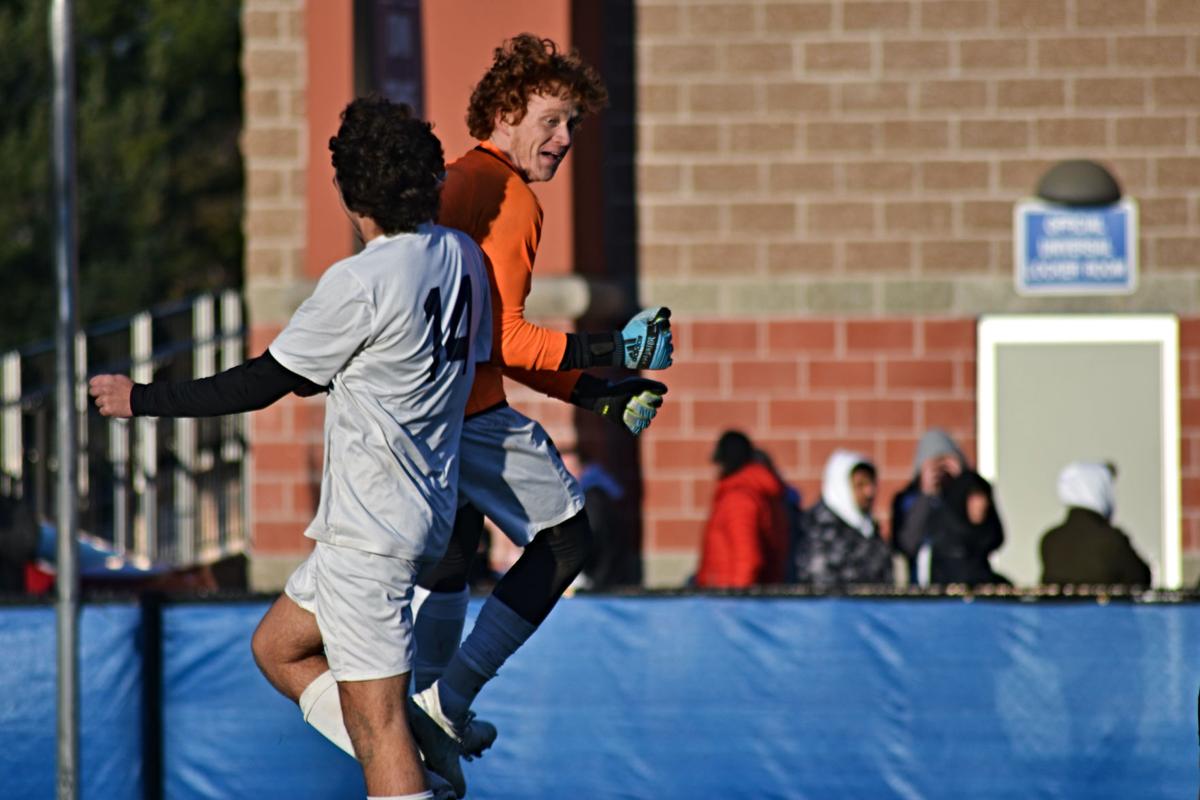 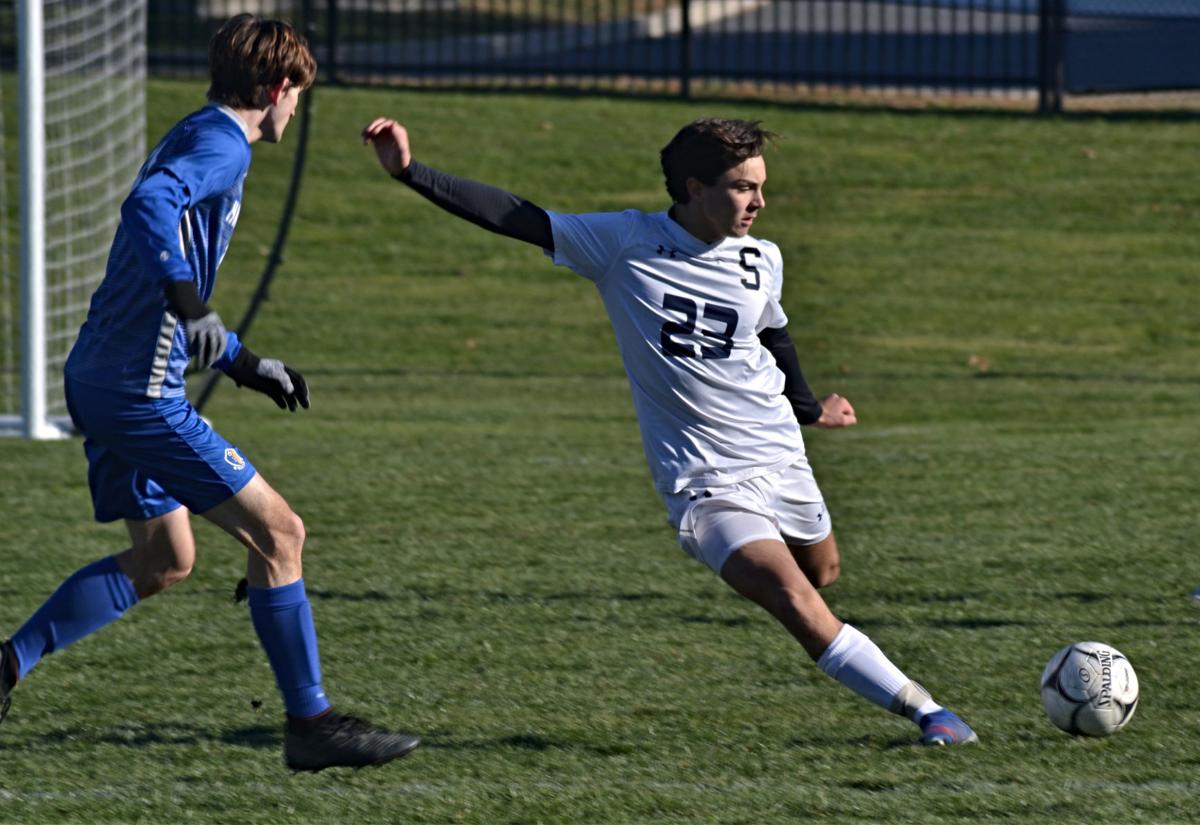 Skaneateles' Owen Cheney kicks the ball away against Haverling in the NYSPHSAA Class B semifinals, Saturday at Middletown High School. 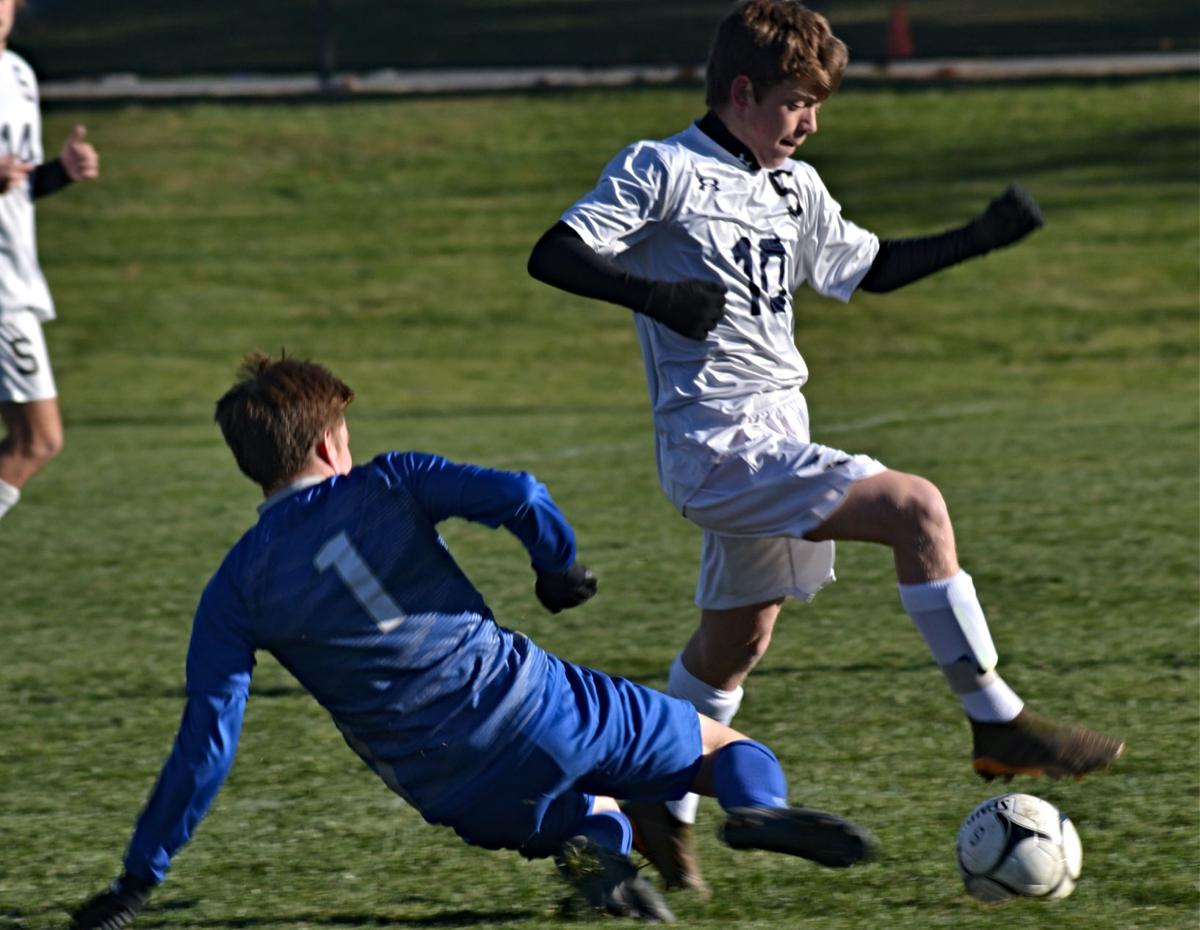 Skaneateles' Landon Hellwig has the ball knocked away by Haverling's Teddie Robbins in the NYSPHSAA Class B semifinals, Saturday at Middletown High School.

MIDDLETOWN — As its postseason run continues, the Skaneateles boys soccer team has developed a motto:

After another win, the Lakers are now asking, "Why not a state title?"

Skaneateles scored twice in the second half, both off the foot of sophomore forward Owen Cheney, to beat Section V's Haverling, 3-1, in the NYSPHSAA Class B semifinals Saturday at Middletown High School.

The Lakers are now one win away from capturing the program's first state title since 2010 and second overall.

"I told our guys that not only do we believe in them, regardless of what happened this weekend, but that they had a shot to win the whole thing," Skaneateles coach Aaron Moss said. "They needed to believe that, and they started to believe that a few games back."

It was the first time Skaneateles beat its opponent by more than a goal since the first round of sectionals, but the Lakers were still on their heels as often as they were on their toes. Haverling had 11 shots on goal and 11 corner kicks, while Skaneateles was held to four shots and three corners.

But the Lakers took advantage of their opportunities. Haverling opened the scoring on Keefer Calkins' goal 15 minutes into the game, but Skaneateles responded less than a minute later on Tylar Moss' corner kick that bounced off some bodies and into the net.

Skaneateles goalkeeper Andrew Neumann was a brick wall the rest of the way. Despite all the shots and the corners against, Neumann didn't allow another ball to get past him. His best save came with less than 12 minutes to go, with Skaneateles protecting a 2-1 lead after Cheney's first. Haverling's Teddie Robbins was alone near the top of the box and fired a bullet at the Skaneateles net, but it was swallowed up by Neumann, who crucially didn't allow a rebound.

On the corners, Neumann often skied above the Haverling attackers and swatted the ball away. That's something earlier this season he was struggling with.

"Early in the season I would step forward, but now I just wait on it, track the flight of the ball and go get it," Neumann said. "It's just a surreal feeling because we've worked so hard this season."

Cheney scored again with 4:54 to go, and that was enough to clinch a title game berth for the Lakers.

Haverling entered the game perfect at 21-0 and had rarely, if ever, trailed this season. That was a key entering the game for Skaneateles: Force a team that rarely played from behind to play catch-up.

"We've played from behind, and they hadn't very often at all," Aaron Moss said. "I don't think anybody's scored three goals on them in two years. We weren't gonna change the things we did because they're undefeated and No. 1 in the state. We wanted to stay mentally stronger than them for 80 minutes, which we did."

Moss credited junior midfielder Landon Hellwig for his role in shutting down Haverling's Thomas Binkowski, a 31-goal scorer this season. Hellwig isn't counted on to score goals and rack up the offensive statistics, but his role is to play feisty and make life difficult on opposing scorers. He lived up to that billing against Haverling.

"Landon has been the glue of that midfield. His motor does not stop," Moss said. "He disrupts, he distributes, and he distracts. When Landon's on you, you're like, 'I'm gonna have a bad day,' because he just does not stop. You can't outwork him, and you can't out-tough him."

The last stop on Skaneateles' journey for a Class B state title will come at 3 p.m. Sunday, back at Middletown High School, against either Section XI's Center Moriches or Section II's Schuylerville.

State championships present a unique challenge, because they are one of the rare times that teams will have to play on consecutive days.

Knowing that, the Lakers specifically scheduled games back-to-back days on multiple occasions this season to prepare the players' legs for this time of year.

Now Skaneateles will find out if that strategy paid off.

"We have the pieces and the recipe to make it happen," Moss said. "We tried to give them the best chance to be successful. The guys, they believe, so if they can handle it physically and dial back in tomorrow, it's anybody's game."

IAC to delay fall sports until next March; Section III to proceed

A pair of local girls swimming and diving programs will have their seasons shifted as a result of league decisions.

Following the announcement Friday that the Interscholastic Athletic Conference would be postponing all fall sports seasons, the Port Byron Cen…

Skaneateles' Owen Cheney kicks the ball away against Haverling in the NYSPHSAA Class B semifinals, Saturday at Middletown High School.

Skaneateles' Landon Hellwig has the ball knocked away by Haverling's Teddie Robbins in the NYSPHSAA Class B semifinals, Saturday at Middletown High School.