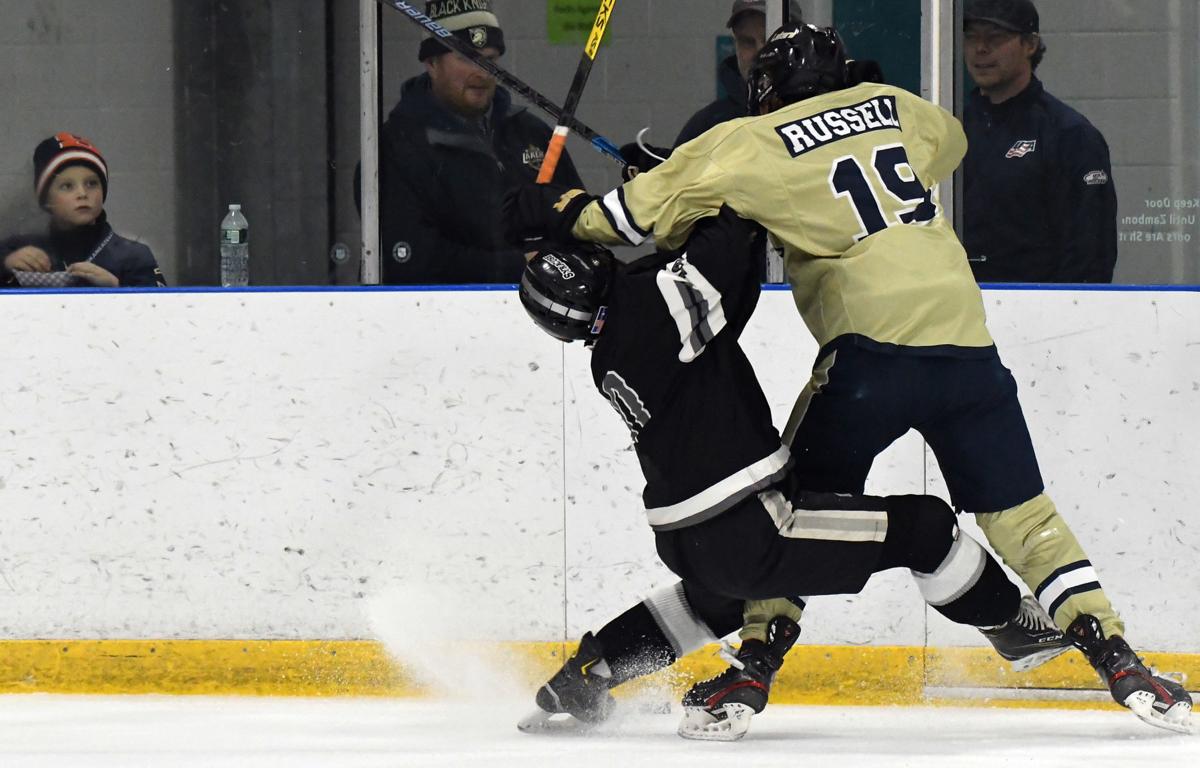 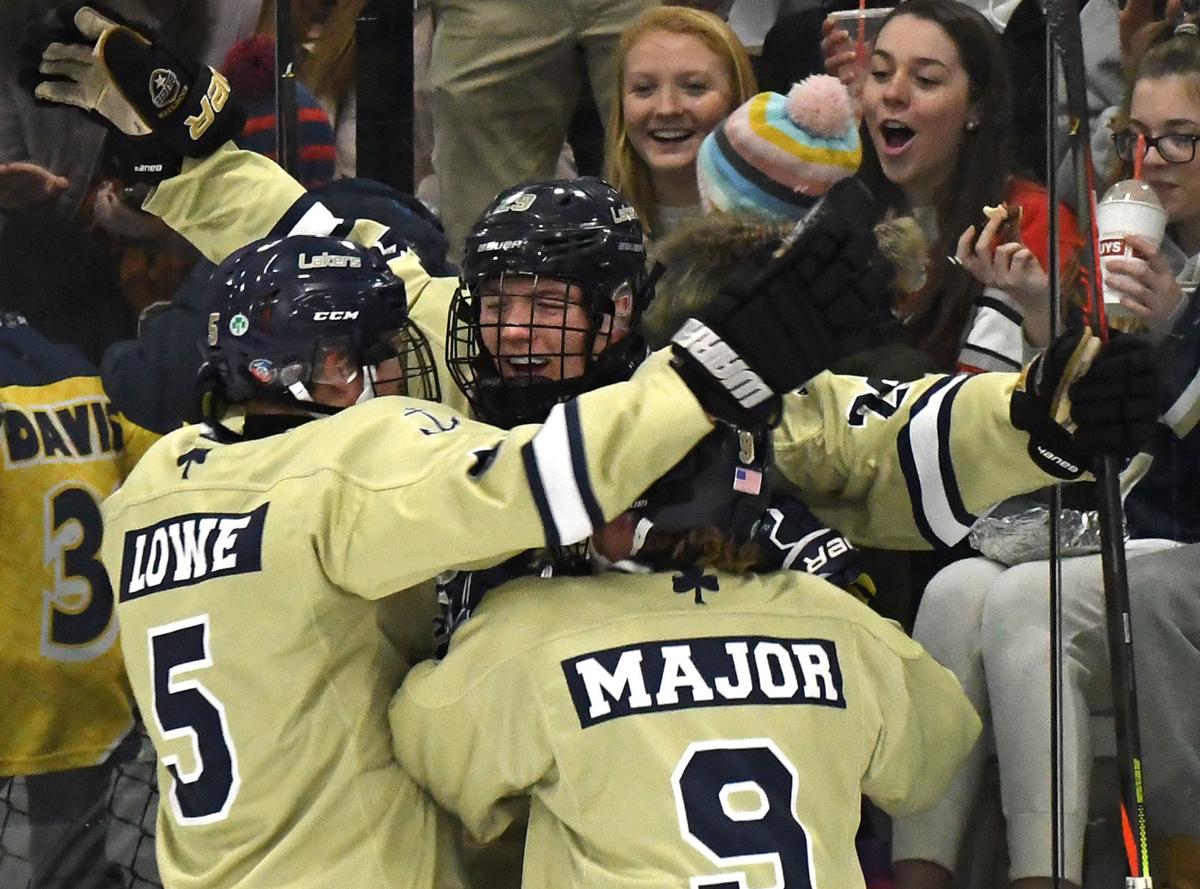 Skaneateles' Jack Henry celebrates with his teammates after scoring a goal against Syracuse, Tuesday at the Skaneateles YMCA. 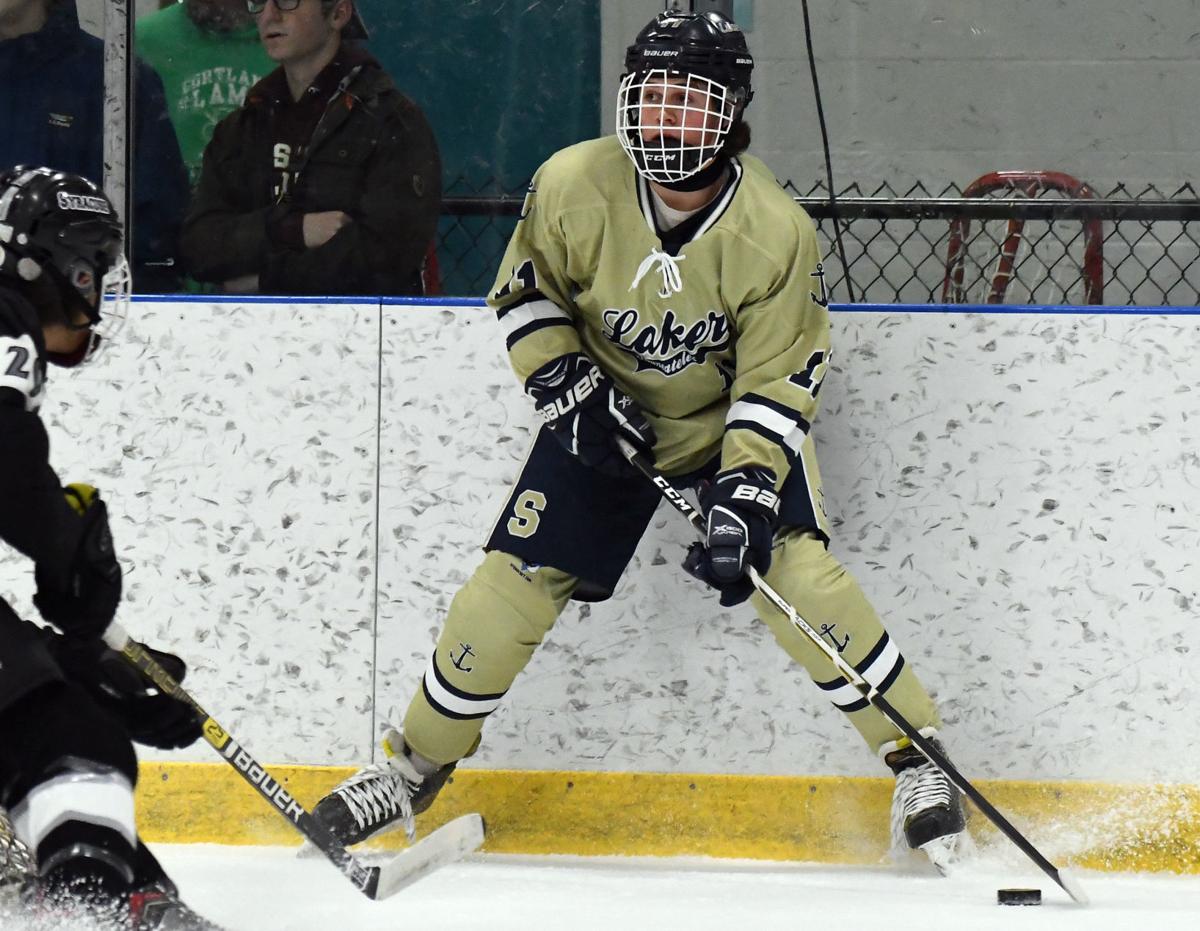 Skaneateles' Colin Morrissey looks to pass against Syracuse, Tuesday at the Skaneateles YMCA. 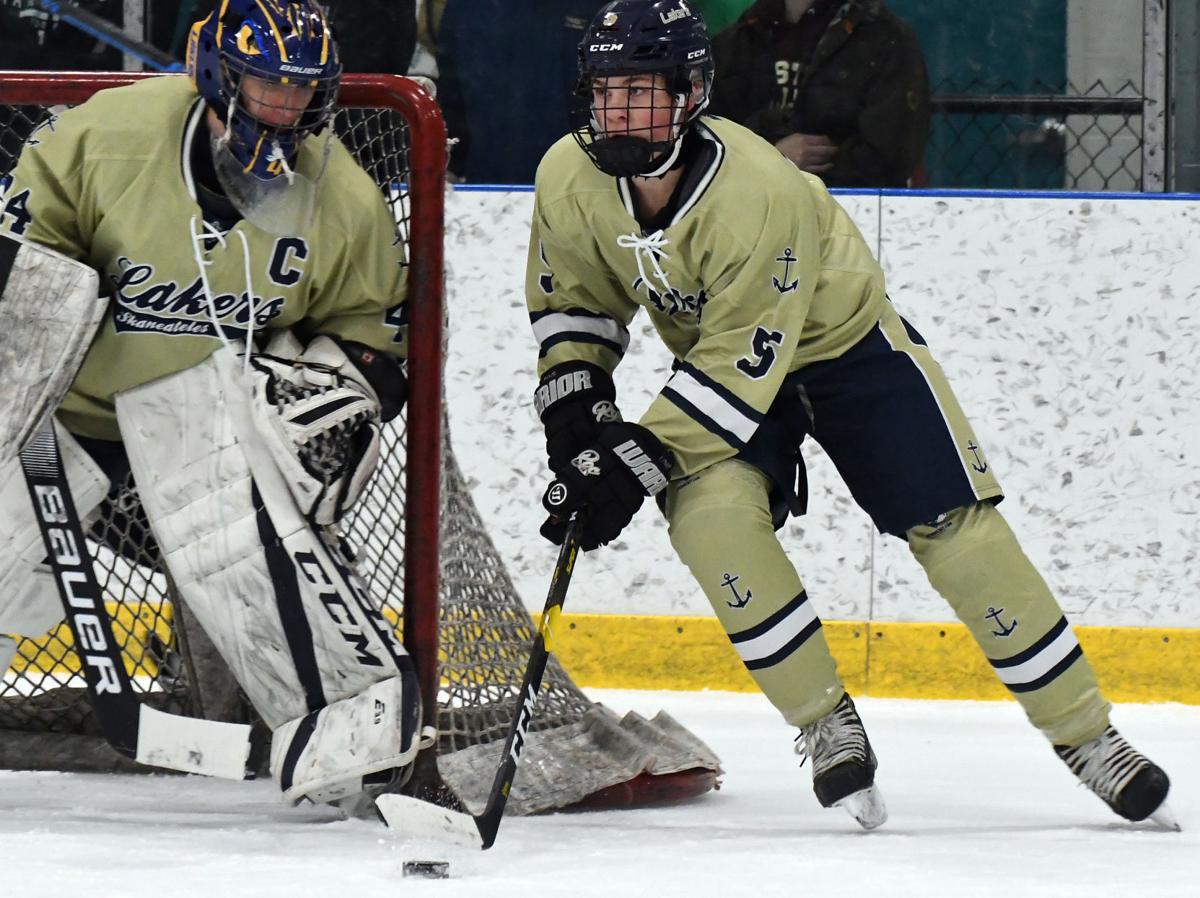 Skaneateles' Cam Lowe bright the puck up ice against Syracuse in boys hockey. 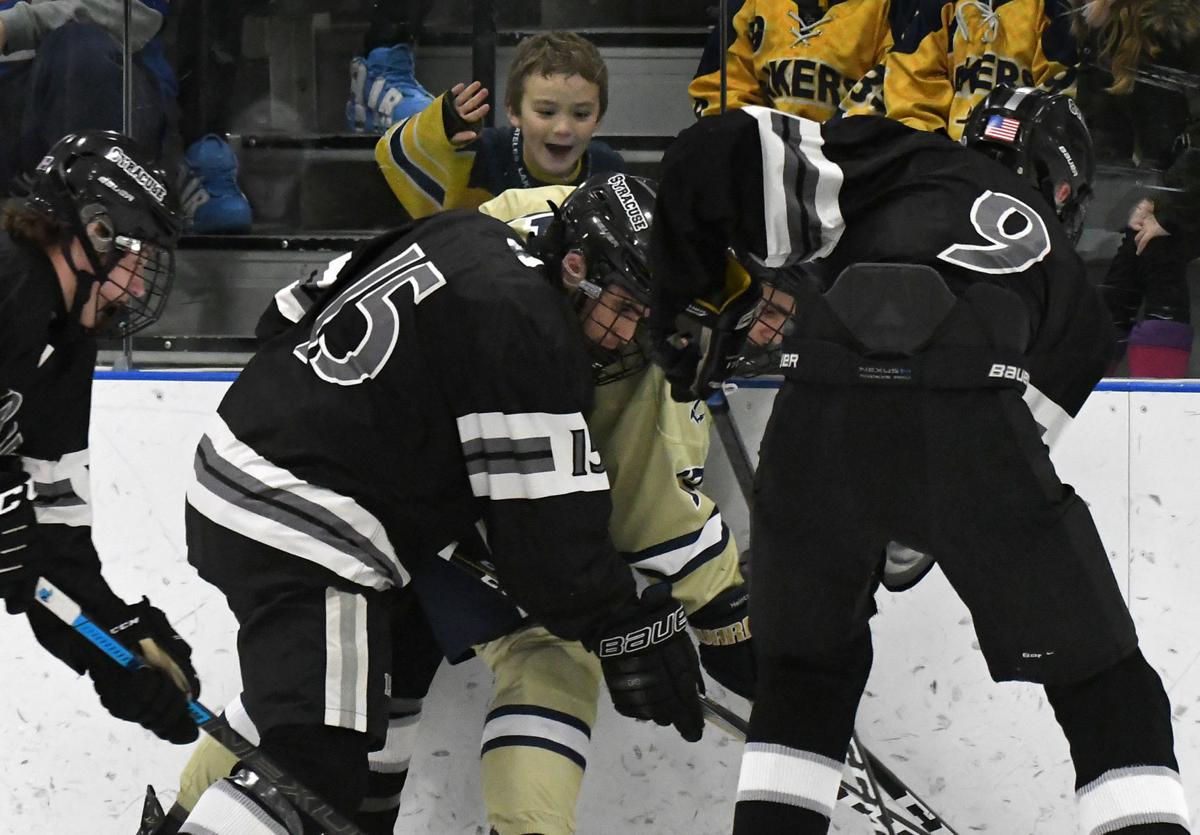 A young fan gets into the action as Skaneateles and Syracuse players scramble for a loose puck along the boards during boys hockey in Skaneateles.

SKANEATELES — Skaneateles hockey's state title defense is off to a strong start.

Only three games into the season, the Lakers have already knocked off a defending state champion and one of last year's section finalists.

Skaneateles shut out Syracuse City 2-0 Tuesday at the Skaneateles YMCA behind a pair of goals from defenseman Jack Henry, both on special teams.

It was a rare meeting between two returning state champs — Skaneateles captured last year's NYSPHSAA Division II championship, while Syracuse did the same in Division I. It was only the eighth time that the Division I and II state champions came from the same section, and the first time that's happened since 2010. The Cougars are also two-time defending Section III Division I winners.

Skaneateles has already beaten Cortland-Homer this season, which was a rematch of last season's Section III Division II title game.

As the Lakers and Cougars faced off, it was Skaneateles that looked primed to repeat that success again this season.

"I really see the effort put forth," Skaneateles coach Mitch Major said. "They're excited to be here each day. Sometimes when you win a championship you have a bit of a lull, but I don't see any of that right now. I'm excited for what we can do this year but we definitely have a lot of work to do. It's gonna be a long process to get where we want to be."

Skaneateles nearly opened the scoring on its first power-play opportunity with less than five minutes left in the opening period on a shot from the left circle by Henry that dinged the post. Another Cougars penalty immediately following the first gave the Lakers another chance, and this time Henry delivered. The sophomore defenseman took a cross-ice pass on the man advantage and slipped a shot through the legs of Syracuse goalie Evan Carter with less than three minutes to go in the first.

Garrett Krieger, who assisted on both of Henry's goals, nearly had one of his own toward in the final seconds of the first when he broke in alone on a shorthanded breakaway, but his move was turned aside by the sprawling Carter.

Krieger helped Skaneateles add some insurance early in the second. With the Lakers again shorthanded, Krieger assisted on Henry's second goal of the game for a 2-0 lead.

The Lakers didn't score again the remainder of the game despite pouring on the pressure. At the other end, Syracuse's chances were limited, but when the Cougars had shots, goalie Adam Casper was there to turn them aside.

Casper finished with 13 saves for the shutout. After sharing the net with graduated senior Chris Falso en route to last year's title, Casper is taking over as the undisputed top option this year and through three games he's delivered three wins.

"Chris and Adam had a great one-two combination last year, and now that it's Adam's net his job is to stay consistent," Major said. "We're gonna count on him for the season. We've got a couple other young goalies that are getting better each day, but we're looking forward to what Adam can do."

Skaneateles (3-0-0) is home again on Thursday against West Genesee, another Division I squad that expects to compete for a section title this season.

Auburn wrestler Luca Pirozzolo was recognized Wednesday for setting the program record for career wins back in December.

Auburn boys basketball racked up 28 assists in its 93-55 win over Fowler Tuesday. Junior Troy Churney had a triple-double.

Auburn wrestling received a late win via decision from Ryan Fedigan to beat Oswego on Wednesday.

Auburn football's Owen Spearing, Shaheed Beal and Troy Churney were named to the Class A all-state team, it was announced Wednesday.

Twelve different players scored at least a point for Weedsport boys basketball in an 82-35 win over Tully on Wednesday.

In a five-set thriller, Port Byron volleyball was edged by Sandy Creek 3-2 on Saturday.

Skaneateles' Jack Henry celebrates with his teammates after scoring a goal against Syracuse, Tuesday at the Skaneateles YMCA.

Skaneateles' Colin Morrissey looks to pass against Syracuse, Tuesday at the Skaneateles YMCA.

Skaneateles' Cam Lowe bright the puck up ice against Syracuse in boys hockey.

A young fan gets into the action as Skaneateles and Syracuse players scramble for a loose puck along the boards during boys hockey in Skaneateles.