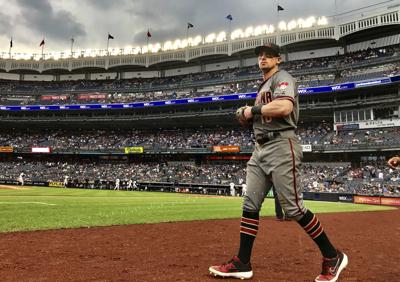 Local sports were not lacking for exciting highlights this past year.

Championships were won, comebacks were pulled off in stunning fashion, and a local baseball hero had a storybook moment against pro sports’ most fabled franchise.

Here are The Citizen’s top sports stories of 2019:

By the end of 2018, Tim Locastro was property of the New York Yankees by virtue of an offseason trade. But a lot can change in a year.

Locastro was a member of the Yankees organization for just seven weeks before New York shipped the Auburn native to the Arizona Diamondbacks for a minor-league player and cash on Jan. 16.

Entering 2019 with only 21 major league games under his belt, Locastro became a fixture with the Diamondbacks this season. Appearing in 91 games, Locastro hit .250 with 38 runs and 17 stolen bases. He was hit by a pitch 22 times, the fourth-most in the National League. Locastro appeared in all three outfield positions for the D'backs this season, often providing highlight-reel defensive plays.

His best moment came on July 31 during the second game of a two-game series against the Yankees at Yankee Stadium.

With the Diamondbacks trailing in the ninth inning, Locastro took an 0-1 pitch from Yankees reliever Nestor Cortes Jr. and launched a line drive over the fence in left field for his first career home run, and the only homer he'd hit in the majors in 2019.

While Arizona ultimately lost 7-5, Locastro finished the game 2-for-4 with a double to go with his homer.

"It's definitely surreal," Locastro said after the game. "I'm happy for my parents, my friends and all of my family who were here because they can enjoy it."

Behind by 32 points late in the third quarter, Auburn football's season looked to be over against Indian River in the Section III Class A semifinals, Nov. 1 at General Brown High School.

Indian River had already beaten Auburn handily during the regular season at Holland Stadium, but this story would have a different ending.

Down 45-13, the Maroons scored 32 straight points to force overtime, including a 27-yard touchdown pass from quarterback Troy Churney to Dante Herndon, following by a two-point conversion by Shaheed Beal, to tie the score with 3:30 left in regulation.

The teams traded scores in the first two overtimes, but Indian River needed to convert a two-point conversion to extend the game into a third OT. The Warriors' first try was unsuccessful, but Auburn was called for a penalty that gave Indian River another shot. But again the Maroons came up big, knocking down a pass attempt to preserve the lead and a 61-59 win in double overtime, sending Auburn to its first section championship game since 2006. The win also guaranteed Auburn a spot in the state tournament, thanks to a new playoff format that included an at-large bid for Section III.

The win against Indian River served as Auburn's last of the season. The Maroons couldn't keep pace with eventual state runner-up Carthage in the section final, then bowed out to Rye in the state quarterfinals.

Auburn finished 2019 with seven wins, none more memorable than the comeback against Indian River.

"We don't spend a lot of time in season talking about accomplishments and milestones, but there's a lot of great things these guys have done," Auburn coach Dave Moskov said after the loss to Rye. "This team has really established themselves in the history of Auburn football with the things they did out on the field ... There's a lot of things to look back on and celebrate."

Considered one of the top Division II teams in New York state for most of the 2018-19 season, Skaneateles delivered on those expectations in dominating fashion.

The Lakers finished with only one loss during the regular season and earned the top seed and a first-round bye in Section III's Division II bracket. Arguably Skaneateles' stiffest test in its playoff run came in its first playoff game, a meeting with Route 20 rival (and defending section champ) Auburn. With a hat trick from defenseman Jack Henry, Skaneateles was able to hold off the Maroons 4-3.

A 4-1 win over Cortland-Homer in the section finals followed. In three state tournament games, the Lakers outscored their opponents 15-3, capped off by a 6-1 victory over Queensbury in the state championship.

“I grew up in Skaneateles. My whole family was here," Skaneateles coach Mitch Major said after the championship game. "It’s just awesome to be able to bring another state championship back to Skaneateles and say, ‘Hey, we’re still on the map here.’ This is important to the community and it’s been important to me since I was born. It’s definitely a special moment.”

Coming off an appearance in the Section III Class D semifinal in 2018, Cato-Meridian bumped to Class C in 2019, but that didn't stop the Blue Devils from having their most successful season in almost a decade.

Cato-Meridian finished perfect during the regular season, establishing itself as a Class B power with a dominant 40-0 win over Skaneateles, winners of two straight section titles, in early October.

The Blue Devils marched all the way to the section finals after playoff wins against Mount Markham and Herkimer. However, dreams of the program's first section title since 1993 ended in the championship, as Cato-Meridian was eliminated by Lowville.

"I'll remember how great we were throughout the whole year," Cato-Meridian coach CJ Hannon said. "This is a great group of kids, I love coaching them, and I'm so proud of them to make it here."

The defending 8-man champion from 2018, Weedsport was even better in 2019. The Warriors posted a perfect 8-0 record this season, outscoring opponents 436-198.

Facing West Canada Valley in the Section III 8-man championship, the Warriors routed the Indians 68-44. It marked the first time Weedsport was able to capture back-to-back section titles in over two decades.

"It's rare, because there's usually so much turnover in high school football, especially for a small school," Weedsport coach Jon Sgarlata said. "To go back to back is not something we prepped or planned for. It's special, because this doesn't happen a lot."

Following a two-year absence, the Bassmaster Elite Series returned to Cayuga Lake in late August for a four-day showcase of the country's top anglers.

Jamie Hartman was the victor in this turn of the SiteOne Bassmaster Elite tournament, capturing a four-day haul of 80 pounds, 13 ounces. The Newport, N.Y. native only recently returned to competitive fishing after missing an entire year due to a back injury,

The event, hosted at Frontenac Park in Union Springs, was not without controversy. The morning of the first day of the tournament, three anglers reported theft of their fishing equipment from a rental house in Aurora. Angler Chris Zaldain posted on his Instagram account that he, Ed Loughran III and Caleb Sumrall had rods and reeds stolen from their boats. Zaldain estimated that $1,000 of his own equipment had been taken.

Auburn wrestling teammates Keyshin Cooper and Luca Pirozzolo both came away with titles at the Section III championships on Saturday.

Union Springs girls basketball held Southern Cayuga to two points in the first and third quarters to earn its 14th win of the year on Tuesday.

WEEDSPORT — Gary Griffin was a legendary coach at Weedsport High School, so much so that when the school renovated its pool in 2016, it was re… 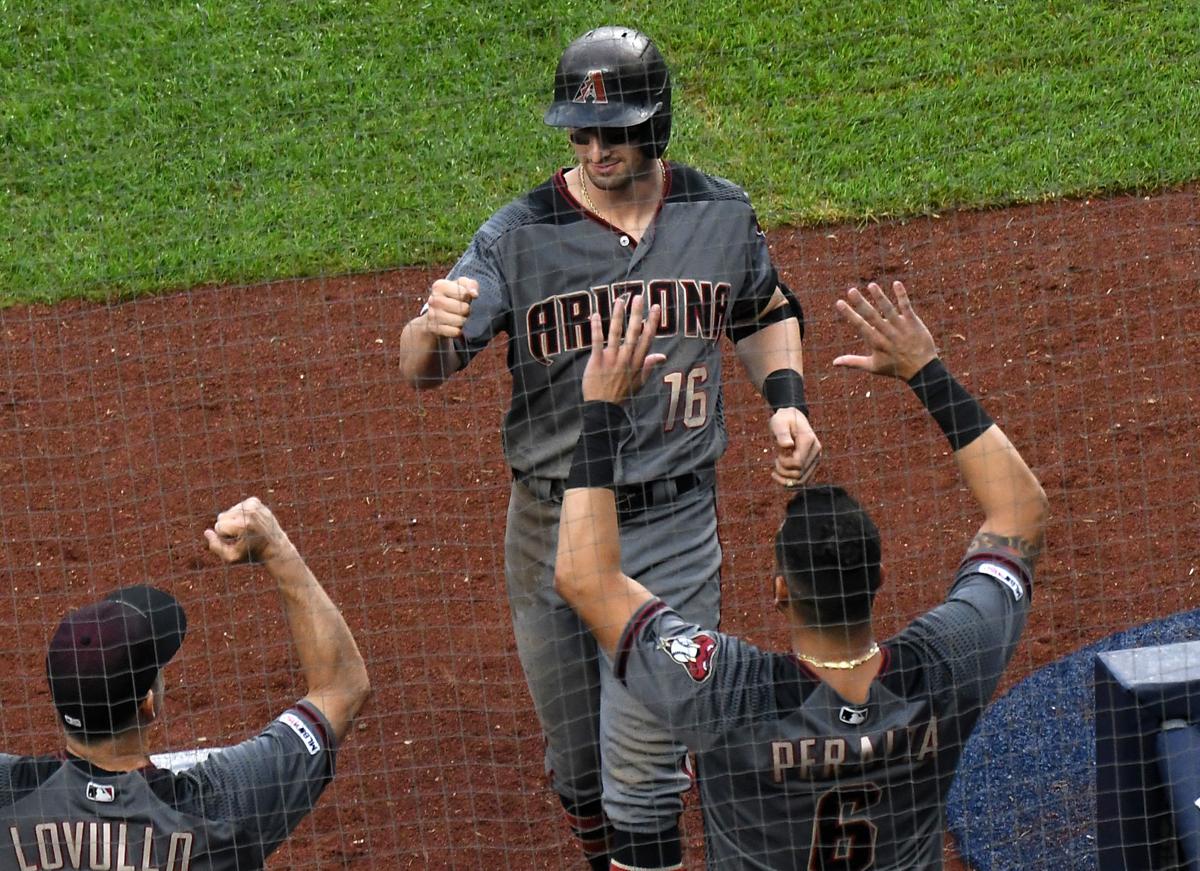 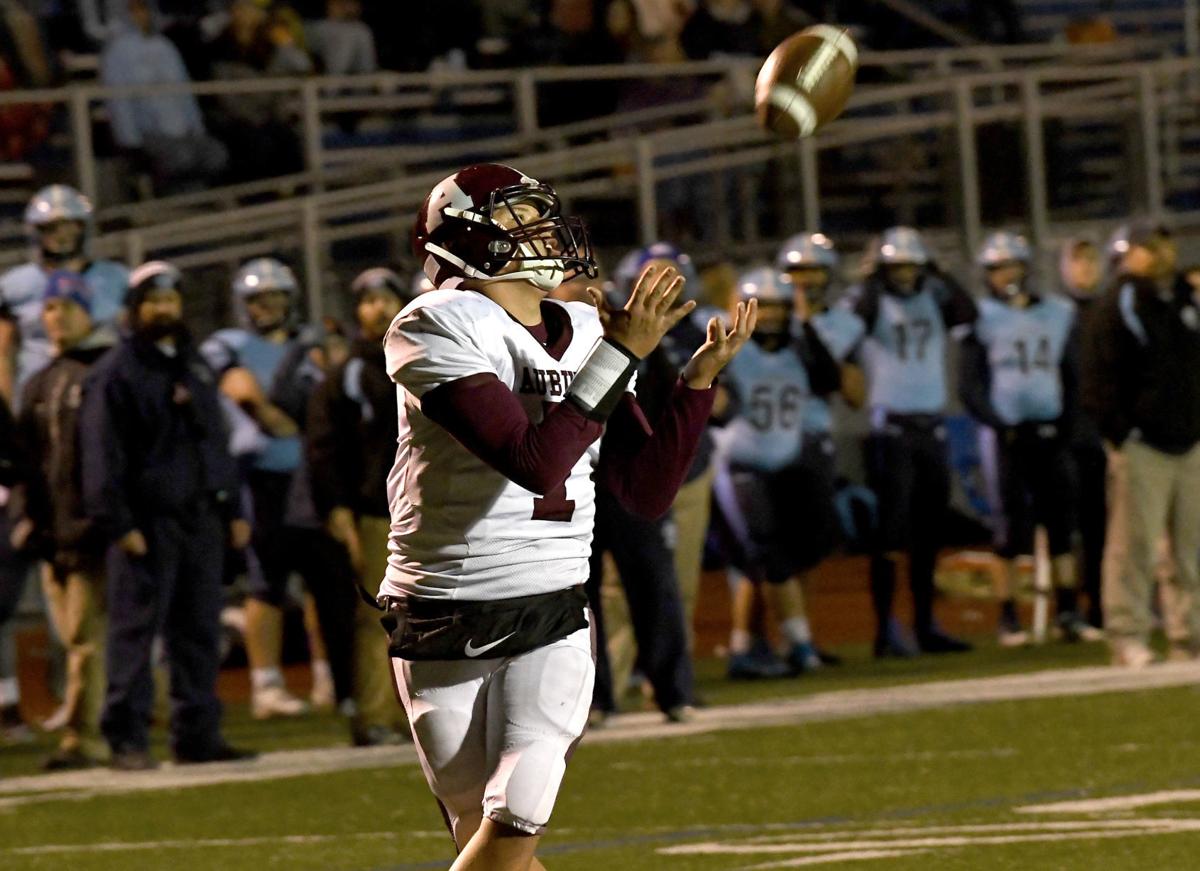 Auburn quarterback Troy Churney catches a half back option pass for a touchdown against Indian River during the Section III Class A semifinal game Nov. 2 in Watertown. 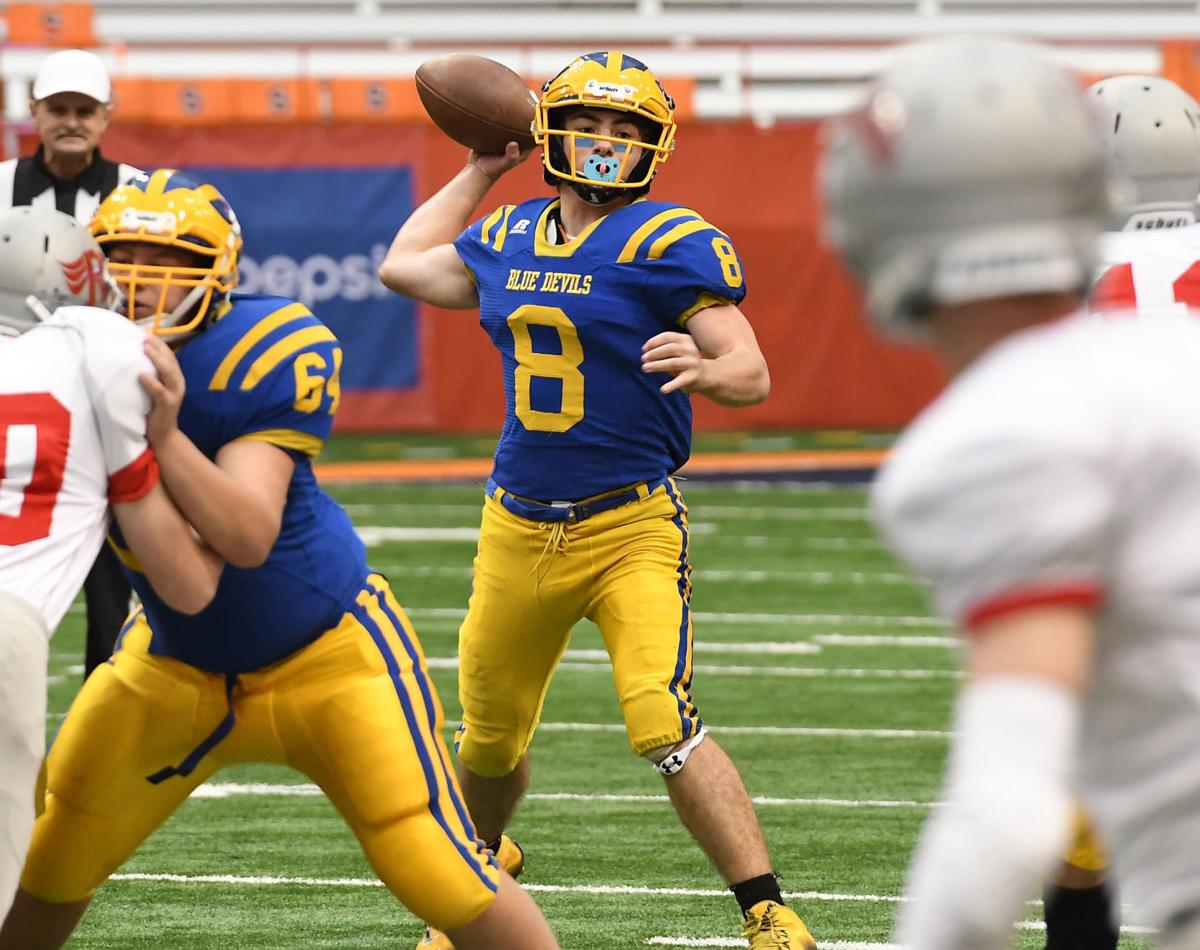 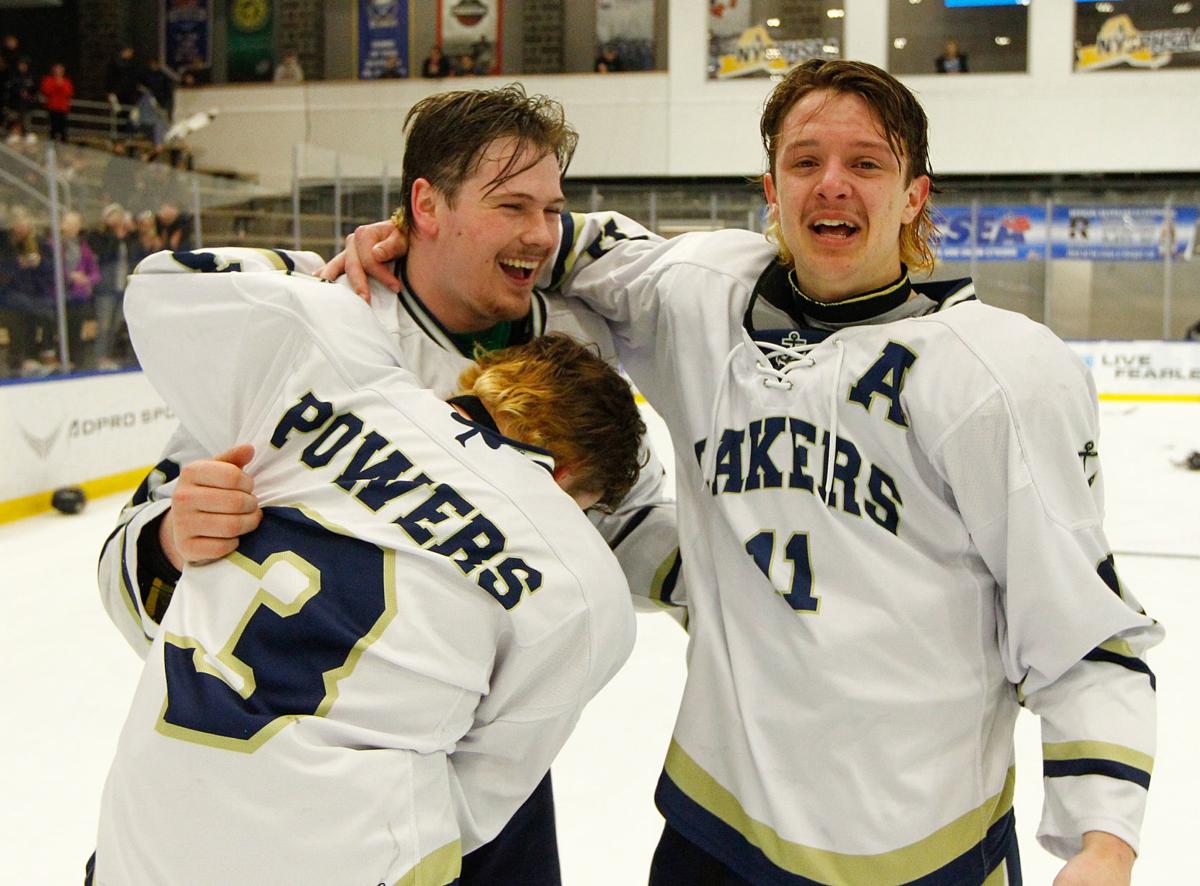 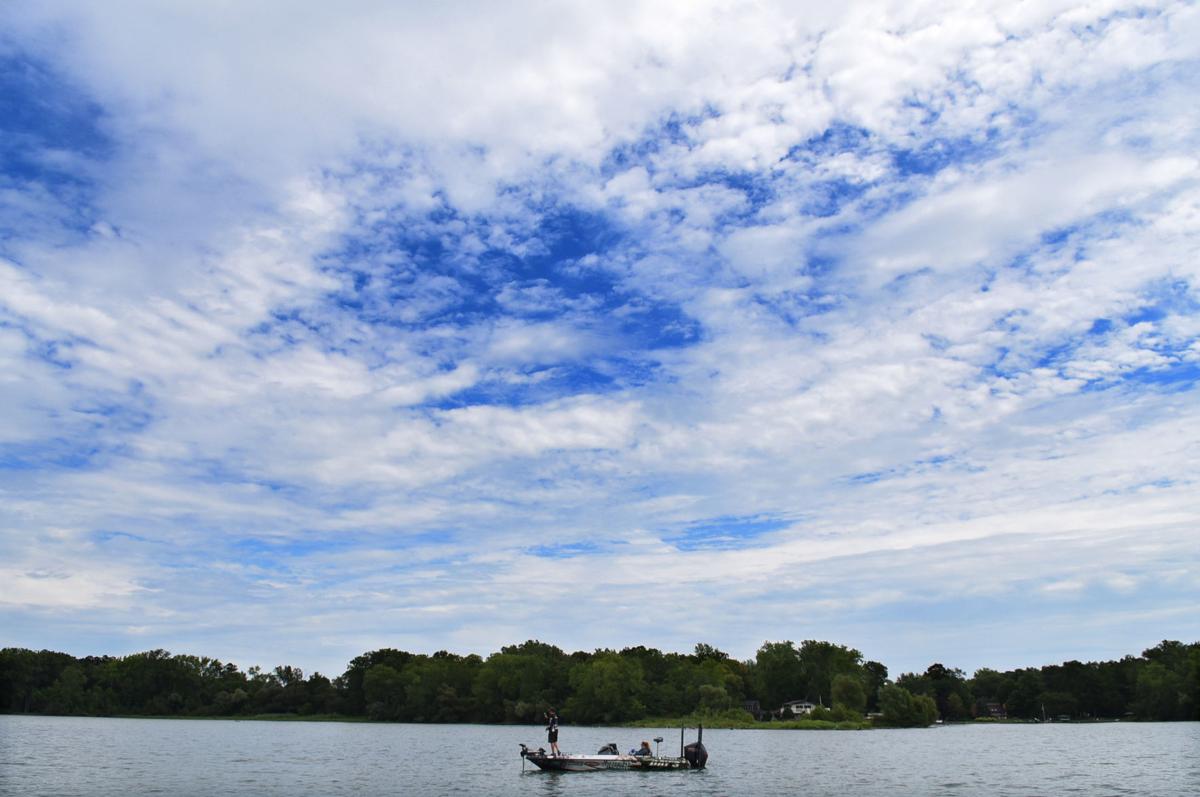