Cozens had a team-high seven shots on goal in the game and one turned into a save-of-the-year candidate for Tuukka Rask as the veteran Boston goalie stretched to his left and robbed Cozens with the glove in the first period.

Especially in the first two periods, the Sabres weren't good in this game. As interim coach Don Granato said, they were chasing all night. Cozens was one of the few players really going as he added one dangerously speedy rush in the third period, too, but Rask stopped his backhand.

"His speed is dynamic. And his quickness is even more dynamic," Granato had said of Cozens earlier in the day. "So his first two, three strides, his speed up and down the rink is high end. But it's the first two strides and separation that he's another level. He's in another category there."

Although what Granato said applied to that third-period burst, it was actually an outgrowth out of a conversation of what we saw in the first 30 seconds Sunday against Pittsburgh. It was exactly the kind of play that former GM Jason Botterill was dreaming about when he took Cozens at No. 7 overall in 2019.

Cozens lost the opening faceoff clean to Sidney Crosby, then got bumped off the puck in the defensive zone by Jake Guentzel. But when defenseman Kris Letang pinched too much and Anders Bjork tied up Letang and Bryan Rust to leave Crosby and Guentzel stuck in the zone behind the play, Cozens was off.

It was a 2-on-1 with the puck still inside the Buffalo blue line and Cozens flew right by the Sabres bench. By stride six, he was already crossing the center red line. Once in the zone, his saucer pass burned Brian Dumoulin and found Ruotsalainen for a one-timer that produced a goal just 26 seconds into the game. The Penguins never caught up as Buffalo won 4-2.

"I saw there was a chance, an opportunity for an odd man rush," Cozens said. "So I just used my legs to get away as fast as I could to create time and space to hopefully make a good play. Obviously, it worked out. So it's always nice to get one on the first shift like that."

You draft at No. 7 overall for offense and Cozens would certainly like to have more than four goals and 11 points thus far. But especially with Jack Eichel out for the season, this is a multi-game lab for Cozens to show he can be a 200-footer center in the NHL. He's had matchups with the likes of Washington's Nicklas Backstrom and Crosby the last few days, and Tuesday's foes were Boston's David Krejci and Charlie Coyle.

Cozens entered the game at 49.6% in the faceoff circle, but struggled in this one, going just 1-7. Good moments and tough ones. Exactly what you expect from a rookie, even a Top-10 pick. And that's fine. Granato wants to see how Cozens reacts.

In Saturday's game, Cozens had a rough giveaway behind the Sabres net that turned into an easy goal for Pittsburgh's Teddy Blueger. Experienced gained the hard way.

"There's always multiple things on a play. All four guys pulled away from supporting him," Granato said. "And so there was mistakes by four other guys as well, there. it looked obvious that it was Dylan's mistake only because of that, but I can assure you that the other four guys were not supporting the way they should have and that complicated the issue.

"I don't worry about making a mistake like that from the standpoint of hurting him the next shift out. And that was evidence and proof that he can handle those situations because he's not going to change. He's not going to curl up and not be the aggressive player we need him to be."

BUFFALO — The Sabres were so confident they had moved forward corner from their miserable past, the team's marketing department included owner…

Jack Eichel: There's a 'disconnect' with Sabres about recovery from injury

The expressions of frustrations from the Buffalo Sabres' top two players, Jack Eichel and Sam Reinhart, has not changed Don Granato's mind.

Eichel refers to `disconnect' with Sabres on treating injury

Retiring Ryan Miller: 'Buffalo is always going to have a big part of my heart'

BOSTON – Ryan Miller wanted to pick the right time to say goodbye to the people, teams, cities and sport that shaped him. 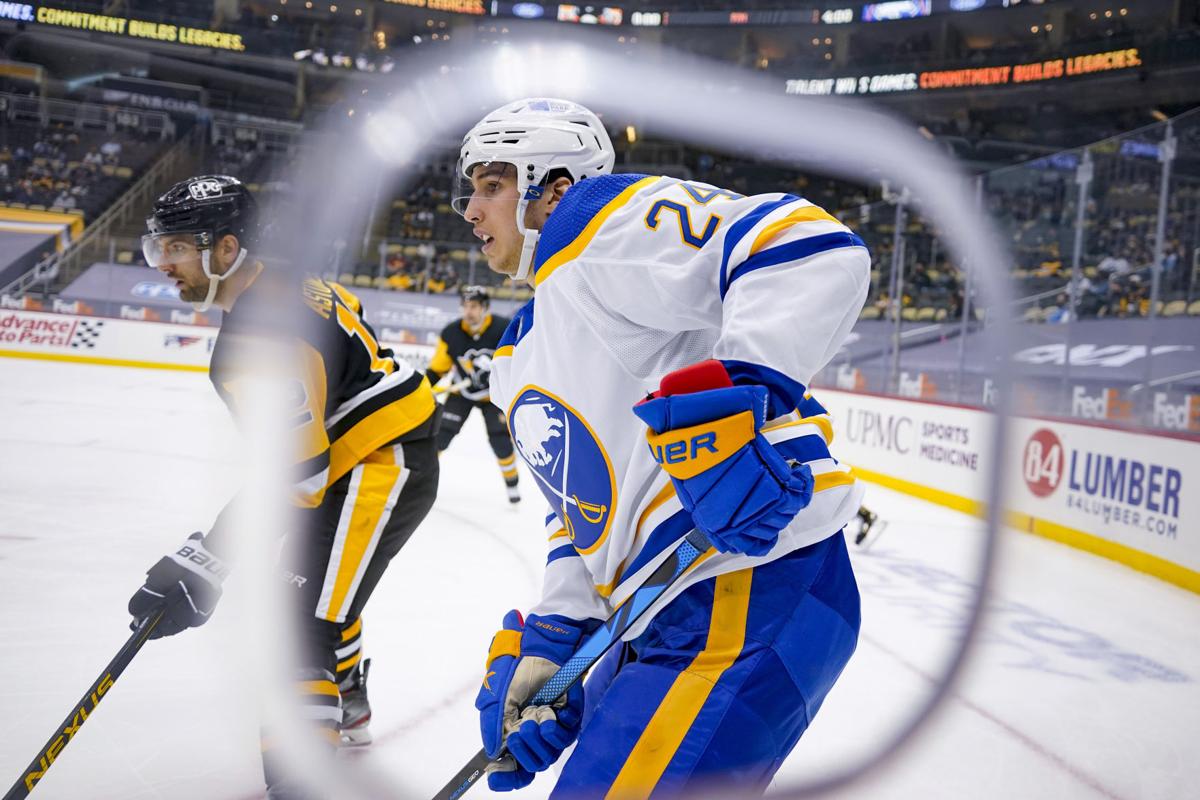 The Sabres' Dylan Cozens plays against the Penguins March 24 in Pittsburgh.