UK lawmaker stabbed at a church in eastern England has died

Let's make this clear right from the opening faceoff.

The Sabres are not tanking. It's reasonable to expect them to be terrible but they're not trying to lose. They're going to be overmatched most nights but you're going to see effort. Based on what we saw at the end of last season, you stand a chance to see some entertainment through patches of games, too, because coach Don Granato believes bad and boring is just death. Props to him.

And for everyone fretting over the losses of Sam Reinhart, Rasmus Ristolainen and Jake McCabe and the inevitable trade of ex-captain Jack Eichel, it's important to be reminded of one key fact: The Sabres finished last overall in the NHL twice in the last four years with those guys.

This corner is about as ardent an anti-tanker as you'll find and would call this organization out in a second if it was warranted, but enough with all this talk of 2014 and 2015. There's no Stink for Shane campaign going on here. Go ahead and spend hours having Uncle Google tell you all about Kingston center Shane Wright, the heavy favorite to walk across the stage at Montreal's Bell Centre on July 7 as the No. 1 pick in the draft. Sure, he would look good in a Sabres uniform. But with 32 teams in the league now, that top pick might be down to 15% in lottery odds. The Sabres can't play for that.

Judging from all the empty seats we saw in the preseason and are sure to see in the months ahead in KeyBank Center, this franchise's brand is more damaged now than at any point in its history other than the 2002-03 bankruptcy season when the NHL was in charge and the Rigas family was doing perp walks.

The Pegulas can't put this city and this franchise through another tanking charade again like the one they rubber-stamped for former GM Tim Murray, the king of "losing properly."

You simply need to compare rosters to see that's not what GM Kevyn Adams has in mind.

Think back to poor Ted Nolan's teams in 2014 and 2015. Remember first-line center Phil Varone? Other immortals up front like Linus Omark, Zenon Konopka and his pet rabbit Hoppy? A defense featuring Andrej Meszaros, Andre Benoit and Tyson Strachan and his no-goal, minus-30 season? Remember Murray trading goalies like Jhonas Enroth and Michal Neuvirth because they were winning too much? Or his 2015 deadline work when he traded Neuvirth, his best forward (Chris Stewart), best shootout player (Brian Flynn) and best penalty killer (Torrey Mitchell) all on the same trip to Tampa?

That, my friends, was a tank.

You're not tanking when you're rebuilding with 12 former first- or second-round picks on your roster like this edition of the Sabres. And there's more coming when you think of J-J Peterka, Jack Quinn, Owen Power, whatever picks they get for Eichel and whatever pick they get from what surely looks like a bottom-five finish this season.

The scuttlebutt is the tank is in goal after Adams signed Craig Anderson and Aaron Dell in the offseason and lost Linus Ullmark in free agency to Boston. A question for skeptics: What prominent free agent goalie was coming to Buffalo this season?

As for training camp, Dell has already flamed out to Rochester and Ukko-Pekka Luukkonen isn't ready. Dustin Tokarski has been strong in the preseason and Anderson will help immensely in the dressing room, like he did last season in Washington, if not on the ice. And the GM is always looking. Stay tuned there.

The Sabres have kept a stiff upper lip during training camp when asked about their dim outlook for the 2021-22 season. On the first day of camp, I put the cards on the table for Adams after he had spent what was probably a torturous 20 minutes talking about the Eichel saga.

The question was simple: What's your message to your players, when basically no one in North America thinks you have any chance to be any good?

Adams exhaled openly before answering. You could tell he was chafed. Good.

"It's about doing things the right way. And it's about building," Adams said. "And it would be easy for me to stand here and get upset at that type of question or statement. But I think the better answer to that is we need to earn it. ... This is about us, as an organization, the culture of our team, earning the respect on a daily basis. It's every conversation, it's every practice, it's every workout, it's every game. We have to earn it.

Excellent. We've heard a lot of talk during training camp from players about getting a "better culture" in the dressing room. A lot of it sure comes off as not-so-veiled comments about Reinhart and Eichel and how they operated like things were never their fault.

Ownership of this franchise has made countless mistakes the last 10 years. So have the revolving door of coaches and GMs. But it's always seemed odd that Eichel and Reinhart – the former No. 2 overall picks built around in the wake of the tank – never got much blame for what went on here. Auston Matthews and Mitch Marner are ringing up seasons of 30-40 goals and 80-90 points with first-round playoff exits on an annual basis in Toronto and getting savaged. So why were Eichel and Reinhart so untouchable here?

Adams has clearly seen enough. He loves Casey Mittelstadt, Rasmus Dahlin, Dylan Cozens and Luukkonen, and with good reason. And he's already got his own draft picks to build around.

You know the big names like Power, Peterka and Quinn. And you'll soon learn plenty more about the ones drafted three months ago like Isak Rosen, Prokhor Poltapov and Aleksandr Kisakov.

Players in any dressing room don't want to hear about draft picks. But especially with Power and Peterka likely full-timers, the 2022-23 season looks to be appreciably more promising than this one.

For 2021-22, if you only look at the standings, you will be miserable. The Sabres are going to set the all-time NHL record with 11 straight non-playoff seasons, a black mark that goes directly to ownership as the only segment of the organization here for that entire stretch.

Watch the players individually. See who gets better. See who regresses. See who gets called up halfway through the season or arrives via an Eichel trade.

"I think it's been laid out pretty clearly here that there's a lot of opportunity for a lot of guys," said defenseman Colin Miller, less than four years removed from his trip to the Stanley Cup final with Vegas. "Everybody has something to prove this year. Me, veteran guys, young guys, everybody. Whether it's establishing yourself in the NHL, there's no better opportunity than here right now."

"The outside doesn't matter," said Dahlin. "If you listen to that stuff, you can't play. We tell each other to stay away from it all the time."

The Sabres aren't going to be any good this year. This time, it won't be for lack of trying. But there's a chance to see some hope.

"You just embrace the challenge," Granato said. "I love the challenge because if we can turn it around, the excitement on the other end is even greater."

In March 2019, before the $72 million contract and three consecutive healthy scratches, Jeff Skinner was asked repeatedly why he wasn’t scorin…

Islanders to open season with 13 road games before UBS debut

NEW YORK — The New York Islanders know what it means to play away from home for a long time. They spent nearly two months in Canada for the 20…

On the cusp of training camp this month, the league’s best and brightest young stars from its U.S.-based teams gathered at the NHL Player Medi… 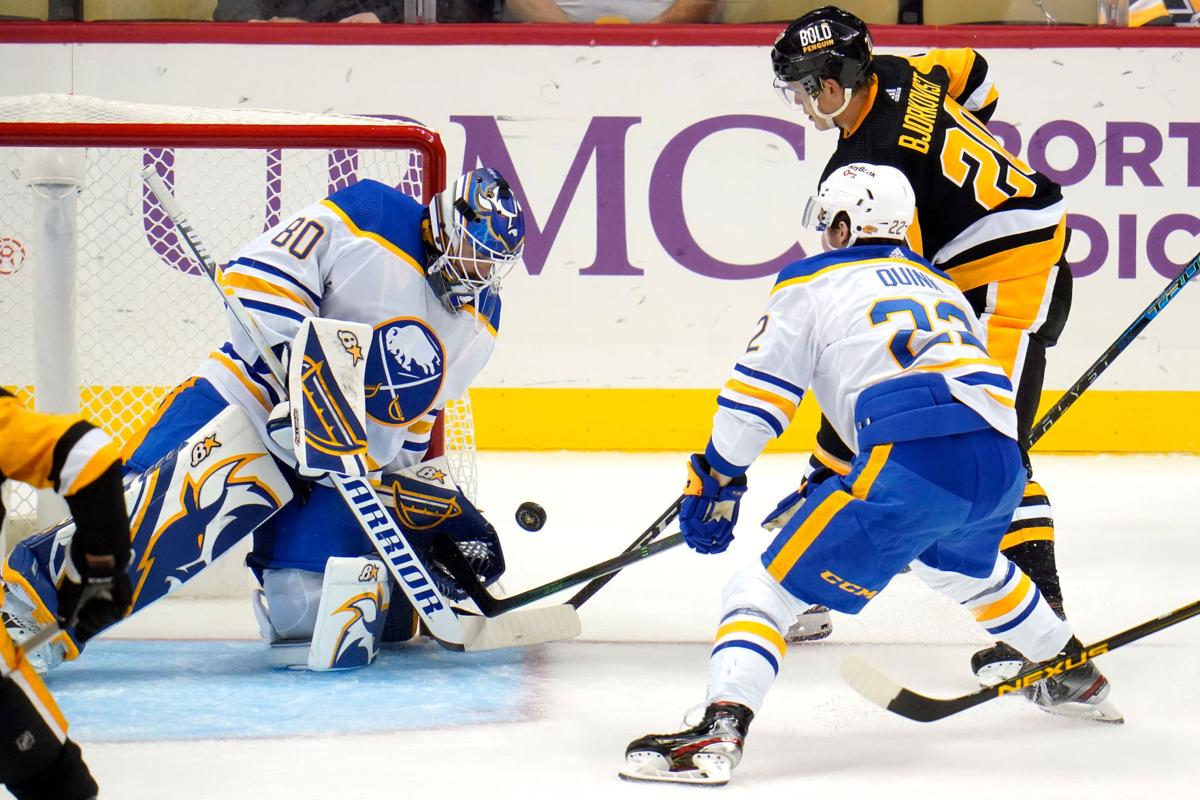 Sabres goalie Aaron Dell blocks a shot from the Penguins' Kasper Bjorkqvist during a preseason game Oct. 5 in Pittsburgh.