Become a Member
Read Today's E-edition
Share This
Taking it up a notch: Auburn native Adam Hurd finishes his college season, hopes to play pro football next
0 Comments
Share this
1 of 3 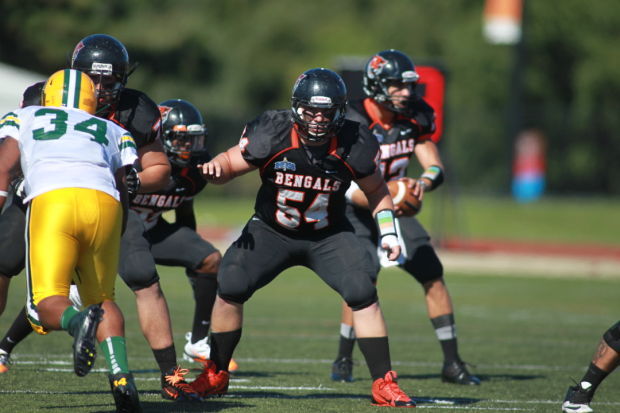 Buffalo State senior Adam Hurd prepares to block in a game this season. 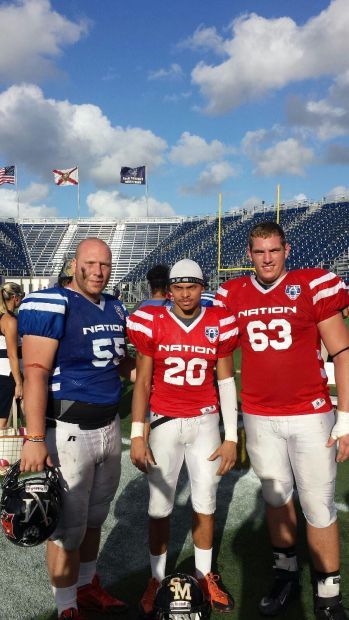 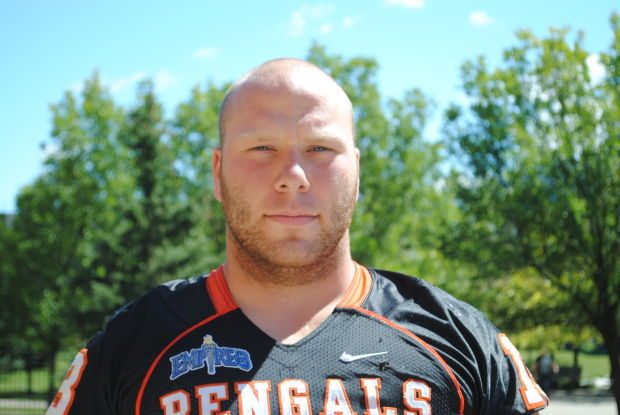 Adam Hurd can't remember a time when football wasn't a big part of his life.

From Pop Warner to starting on a Division III college squad, the Auburn native has played the game for 16 years - and Hurd hopes his career isn't over just yet.

At the fourth annual National Bowl game at Florida International University a few weeks ago, the senior culminated his collegiate playing career as a member of the Red Team's offensive line, playing against two of his teammates on the Blue Team in a 40-26 win for Red.

"It was breathtaking," he said. "The possibility of playing at another level - it was amazing. It was probably one of the most amazing playing football experiences of my life. To be among the best seniors in the country, it was fun playing in the sun. It felt like training camp all over again."

Among the NFL scouts at FIU were from Hurd's favorite team, the Dolphins.

"I got a chance to meet the scout from Miami, talked to him for a little bit," Hurd said. "It was a good reason to play even harder."

While it was fun for Hurd to have his college teammates Chris Hall (DB) and Michael Feirabend (OL) at the National Bowl with him, it's been an even better ride for Hurd to play on the same college team with his high school teammates, quarterback Dave Jacobs and running back Ismail Brooks.

Jacobs has been Hurd's roommate throughout college and works alongside him at Neighborhood House, as both are teaching assistants. Brooks, one of the Maroons all-time best running backs, has been a teammate of Hurd's since third grade in Pop Warner.

"It'll be weird not playing together next year," Hurd said of his Auburn teammates. "It's been a surreal journey, those are two great friends of mine."

Hurd's journey in his playing career at Buffalo has been interesting.

"It's been up and down," he admitted. "It was tough to get playing time as a freshman and I got in a couple of times as a sophomore."

After an injury to another player, and a lot of hard work, the Auburnian didn't miss much playing time in his junior and senior seasons.

As Hurd works to get his degree in Elementary Education (with a minor in coaching) for another year, he plans on remaining on Buffalo's sideline, as an assistant coach for the offensive line.

"I will still help out the team next year," he said. "There has always been football in my life - I don't know what I'd do without it."

Becoming a coach is a good secondary plan for Hurd, who would love to play professional football. He was approached by an arena team after the National Bowl, and luckily, there are a lot of pro teams that can use a 6-1, 280-pound offensive lineman. He'll be happy to continue his football career - in either facet.

"I'm going to train hard," Hurd said. "It'd be tough giving up the game. I'd love to try and play again. Next, I'll keep in shape, get my degree - NFL teams will have my film soon. Either way, I'm not going to be done with football."

The Auburn Ice Hawks 12-U team participated in the sixth annual Griffin's Guardians Hockey Tournament over the weekend and won all four of its games.

Cayuga County-area bowling scores for the week of Jan. 23

Syracuse's NCAA tournament hopes dwindling with loss to No. 6 Duke

DURHAM, N.C. — AJ Griffin attempted 10 shots Saturday, nine of them from behind the arc. If Duke coach Mike Krzyzewski had his way, Griffin wo…

Cayuga County-area bowling scores for the week of Jan. 16

Chiefs end up on top in potential game of the year

Chiefs end up on top in potential game of the year

Buffalo State senior Adam Hurd prepares to block in a game this season.