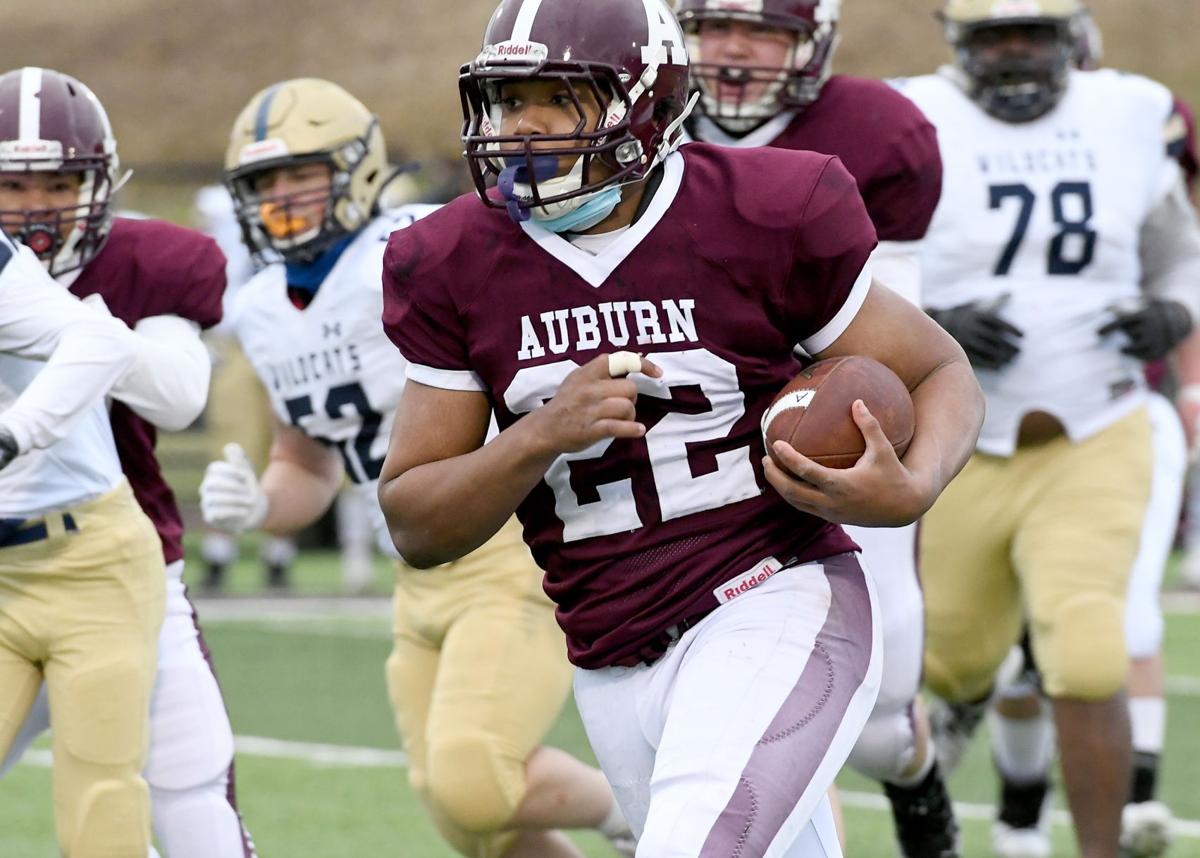 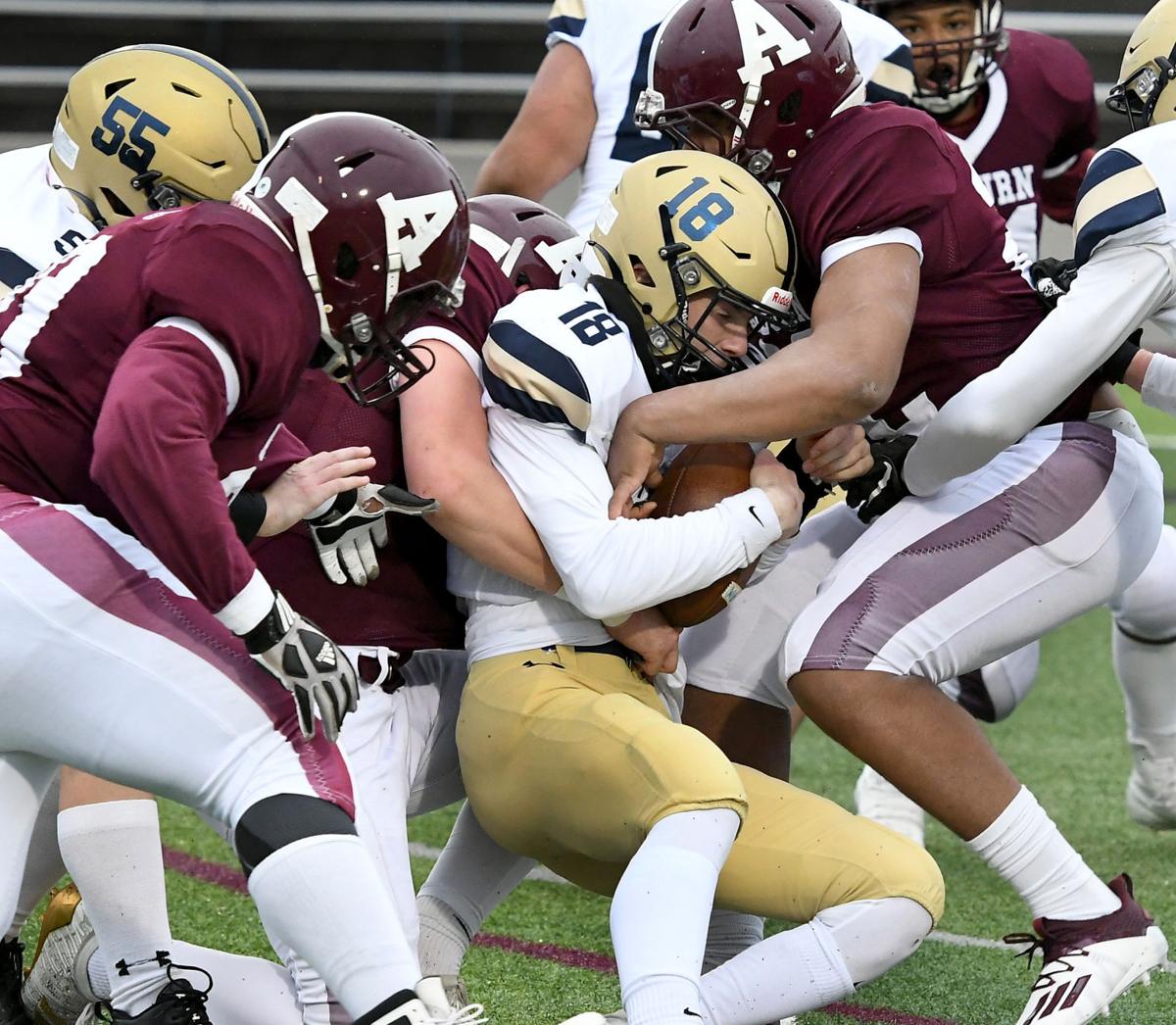 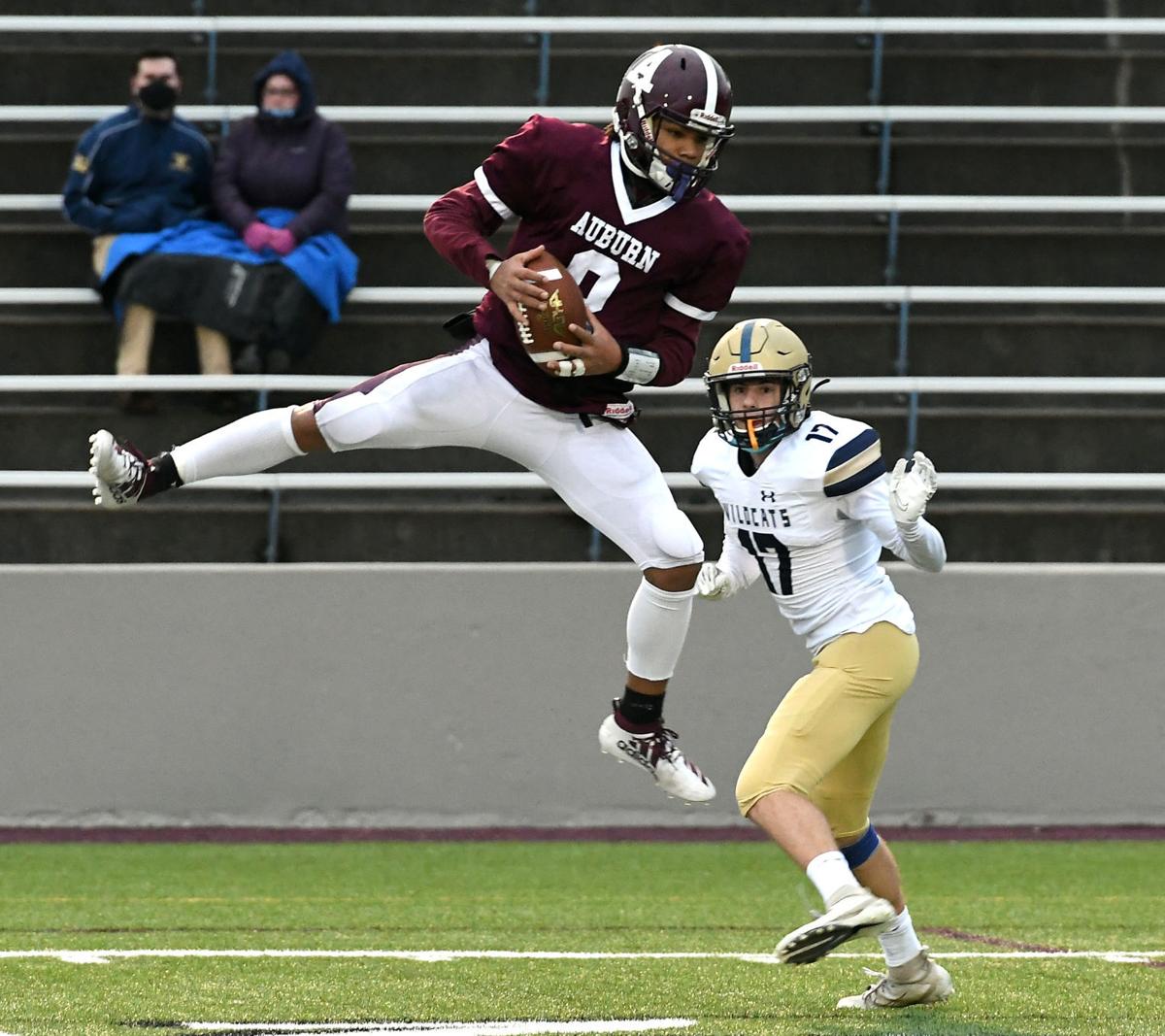 AUBURN — Sixteen months is a long time to be away.

Auburn football had not played a game since Nov. 15, 2019, a state quarterfinal matchup against Rye. The Maroons' last home game dates back even farther to Oct. 18, 2019, a win against East Syracuse Minoa.

Battling an opponent, a long layoff and even their own mistakes, Auburn still came away with a 28-15 win over West Genesee Friday to kick off an unprecedented spring football season.

This game was not like any recent others for Auburn. During normal times, the Maroons are greeted with roars from the crowd as they descend down the Holland Stadium steps prior to the opening kick. Chants of DE-FENSE can be heard when the defenders face a critical down.

Friday night there were some muffled cheers from the face-covered family members in attendance. The pregame fanfare was completely absent. Most of the energy during the game was generated on the sidelines among the players.

"It was different, but we've been wired that way," Auburn coach Dave Moskov said. "I think we were just so excited to play the game, that was the No. 1 focus."

Auburn, like all other teams in New York state, couldn't play its typical fall season because of the state's COVID-19 protocols for sports and recreation, which banned high-risk sports. When the ban was lifted in January, that allowed football teams to participate in the fall II season that began earlier this month.

The Maroons hit another road block last week, however, when their original season opener against East Syracuse Minoa was postponed after a member of the opposing coaching staff tested positive for COVID-19.

While a little extra patience was required, Auburn was emphatic to return to the field and compete.

"I don't know if I've ever been more happy for our kids," Moskov said. "Last week the game got canceled, but we knew where the energy was. Watching them come out onto the field today, knowing what they went through the last 16 months, the personal battles ... I just couldn't be more happy."

That happiness continued through the Maroons' opening drive when quarterback Troy Churney ran a play fake and connected with Jeremiah Phillips on a 1-yard touchdown for a 6-0 lead.

Then anxiety kicked in. Auburn's first possession of the second quarter resulted in a safety, and then the Wildcats took a 9-6 lead when Exavier Brumfield ran 8 yards for his first score.

A 38-yard run by Eli Benson put Auburn back in the driver's seat, but only temporarily. The Maroons' fumbled on their next drive, and West Genny turned that mistake into another score on Brumfield's second touchdown.

A bad situation got worse when the Wildcats' ensuing squib kick bounced off a Maroons special teamer and into the hands of West Genny.

The Wildcats advanced deep into Auburn territory, but were done in by some self-inflicted wounds. Multiple penalties pushed West Genny back to its own end of the field, and a Connor Mahunik sack on a rare 3rd-and-45 effectively ended that drive.

West Genny then had its own special teams gaffe, as a bad snap on a punt was recovered at the Wildcats' 6-yard line by Auburn's Delmar Goldsmith. Churney then threw his second touchdown pass, this time to DeSean Strachan, for a 20-15 lead.

Auburn's defense needed another stand in the fourth as West Genny drove all the way to the Maroons' 6. But consecutive losses, including another sack from Mahunick, prevented the Wildcats from regaining the lead.

On the game-sealing drive, Churney connected with Strachan for a long completion before Benson's 11-yard touchdown served as the game's dagger.

By game's completion, the two teams combined for four fumbles, two interceptions and two egregious special teams mistakes. But the team able to overcome those errors was the mentally-tough Maroons.

Even the officials are still working out their kinks. Auburn's defense nearly had another fumble recovery in the third quarter, but the play was blown dead by an inadvertent whistle.

"We made so many mistakes in the first half, we really could've gotten ourselves down and turned on each other and got frustrated," Moskov said. "The kids regrouped at halftime. We were a little tired and it showed. We had a defensive stand (after the inadvertent whistle), and after that we took over the game."

The game also featured some history, as kicker Amelia Bartolotta became the first female to take a snap for Auburn varsity football in the program's storied history. Bartolotta entered for one play in the first quarter to attempt an extra point.

While the return to the field was sweet and the win sweeter yet, it was a special night for the senior players whose final season had been in jeopardy for several months. That includes Mahunik, the defensive end whose "relentless" play totaled three sacks.

"It was 100% worth the wait," Mahunik said. "We waited a long time for this and went out there and executed. We're a hard-hitting group that knows our assignments and knows how to get the job done. I'm soaking up every minute of it."

Amelia Bartolotta initially laughed off the idea of being a football player.