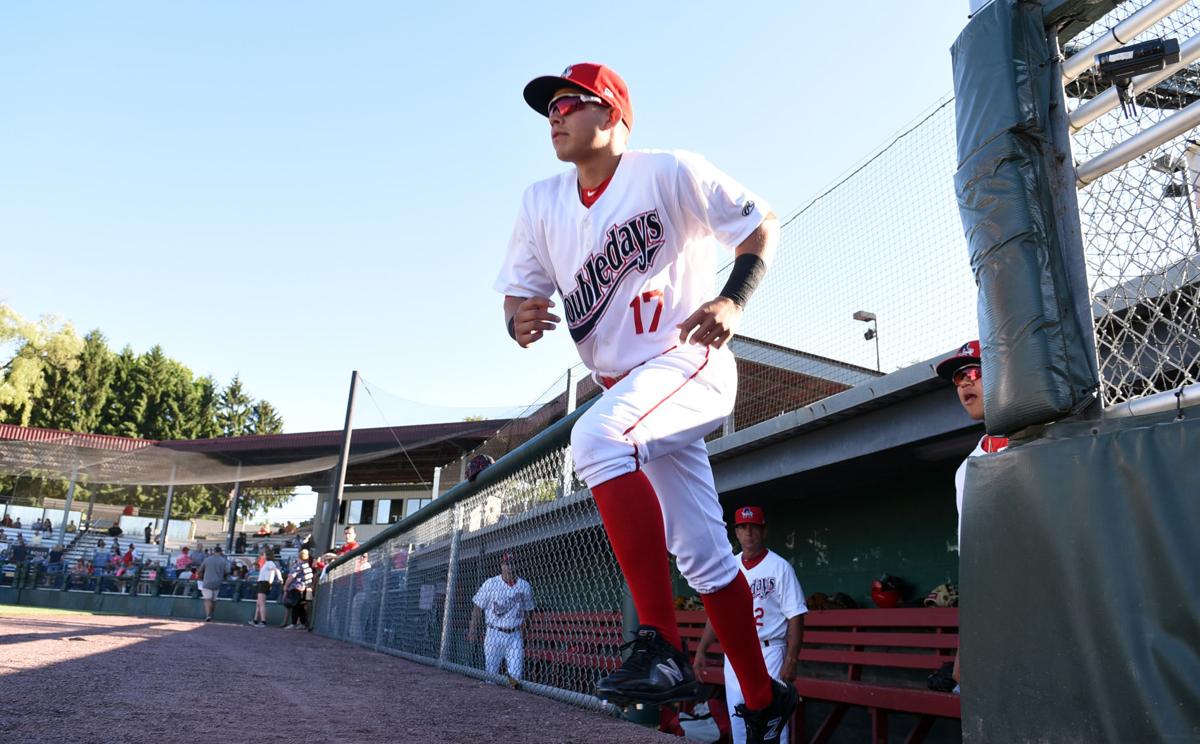 The Doubledays' Ricardo Mendez runs out to the field during team introductions prior to the 2018 season opener at Falcon Park. 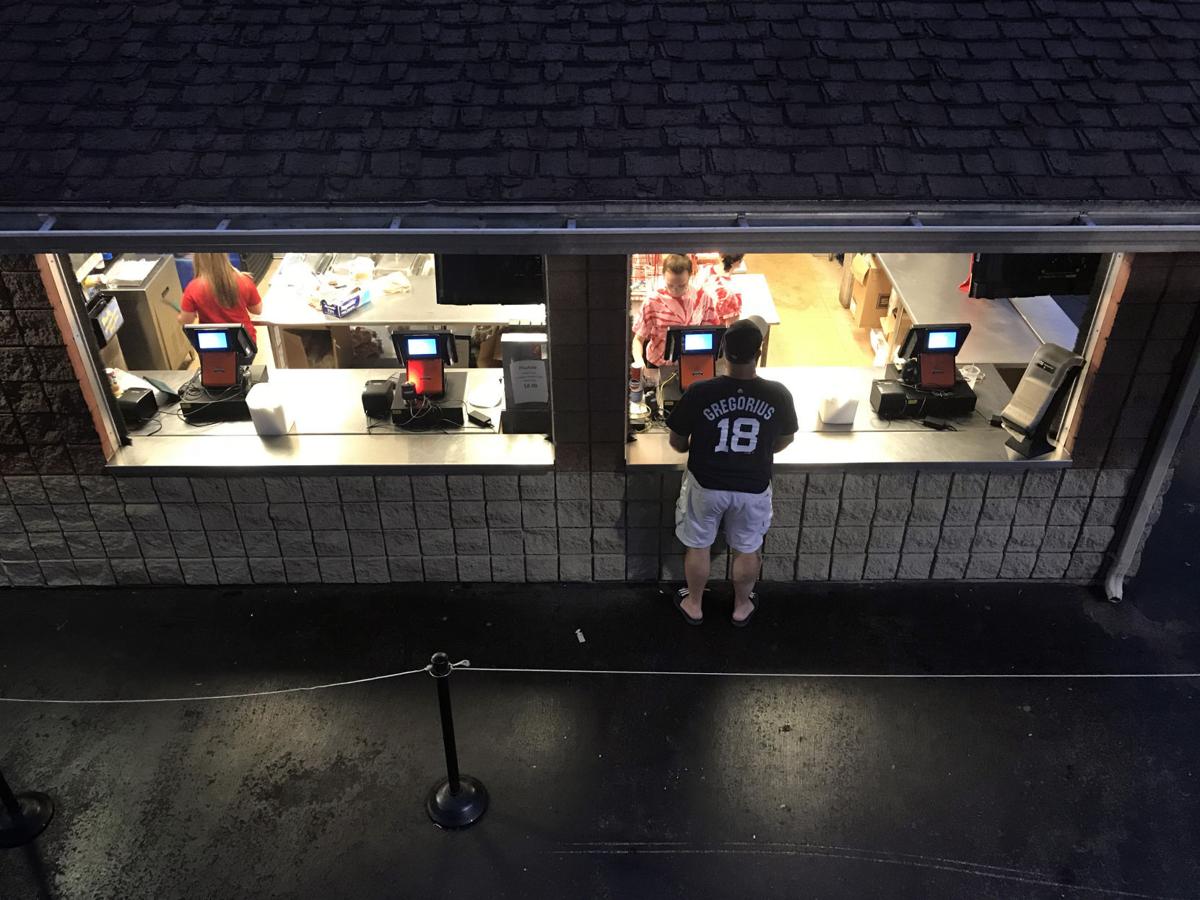 A fan waits at the concession stand at Falcon Park during a game between the Doubledays and Mahoning Valley Scrappers in 2018. Doubledays officials are considering installing Plexiglass dividers at concession stands for the 2020 season. 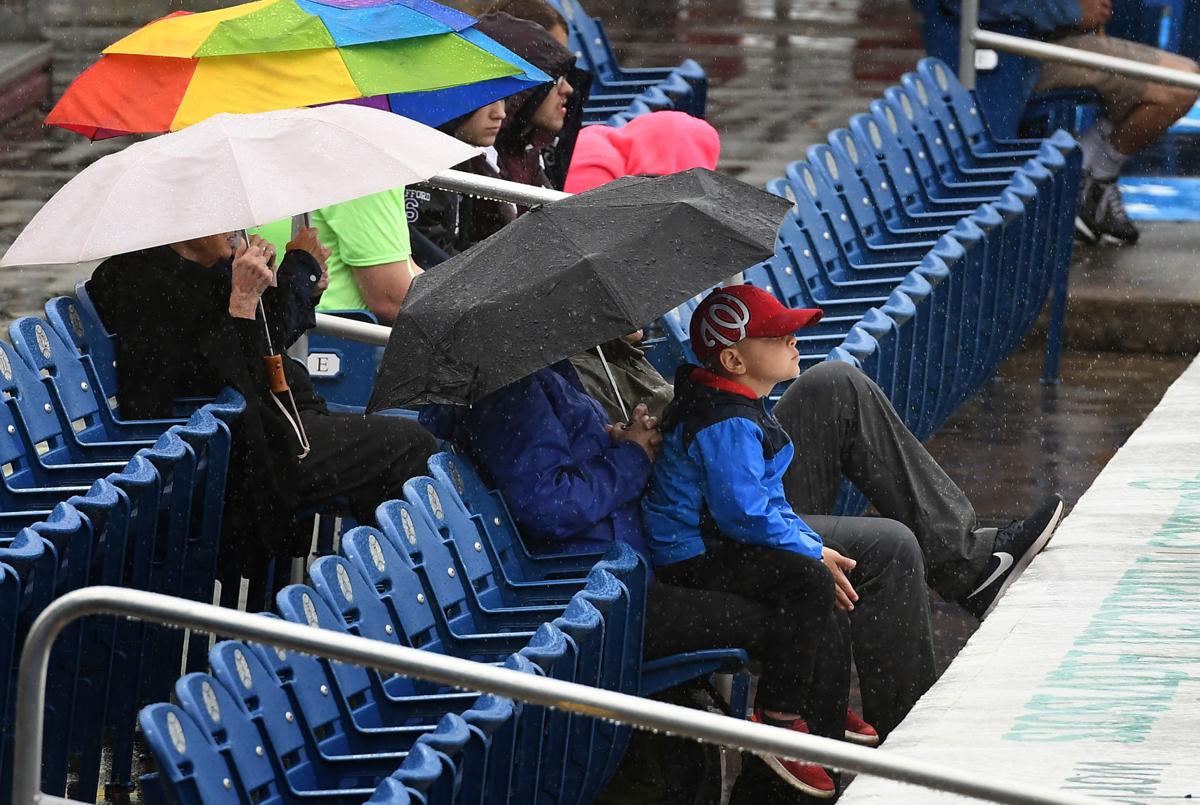 June typically marks the beginning of the New York-Penn League season, and while minor league baseball's status is up in the air, the Auburn Doubledays are still preparing to host ballgames and fans in 2020.

Baseball at every level is currently in a holding pattern due to COVID-19. MLB and its players are negotiating a return-to-play plan, and MLB organizations are still maneuvering whether or not to pay minor leaguers while no games are being played.

Considering all the uncertainty, the Doubledays are still forging ahead, even though the front office at Falcon Park has been closed since mid-March when New York's pause began. So far there have been no updates to the New York-Penn League schedule, which has the Doubledays playing their first game June 18 at Batavia and their first home game June 21 versus State College.

Entering his first season at the helm, new general manager David Lindberg admits it's been difficult to prepare with all the uncertainty due to coronavirus, but the Doubledays are taking all steps necessary to ensure readiness if and when the season does begin. Obtaining sponsorships has been a struggle, though Lindberg anticipates the Doubledays' community partners will come back once there's more clarity about the upcoming season.

"I had in the works a lot of different projects and ideas, getting stuff ready for the season, and it's pretty much all come to a halt right now until we get some more clarification on what's coming down the pipeline," Lindberg said in an interview with The Citizen Tuesday. "I'm really looking forward to the season, as there's some really great, unique and different things planned for our fans. I'm looking forward to getting those ideas and different events out there."

During a normal season, short-season players arrive at team facilities within a week of their team's season opener. Early in the season, short-season or rookie ball rosters are comprised of undrafted free agents or players from previous drafts. The MLB First-Year Player Draft is typically scheduled for the first or second week of June, and draft selections (after signing their contracts) often report to their new organizations' short-season team.

How minor league baseball, and the Doubledays specifically, will look in 2020 remains to be seen. Normally 40 rounds with over 1,200 selections, this year's MLB draft — scheduled for June 10-11 — will consist of only five rounds. Players that are not selected are permitted to sign with any MLB organization.

The Doubledays are also on the heels of a transitional offseason. Adam Winslow, who had two separate tenures as general manager, resigned from his position in November after a three-year turn. Bob Scarborough took over the job on an interim basis, but resigned in January and was replaced by Lindberg.

Lindberg, a SUNY Cortland graduate, has performed several different roles since joining the team as an intern in February 2018. Last season, Lindberg was the Doubledays' sales and marketing manager before being promoted to assistant general manager in the wake of Winslow's departure. He took over as general manager in January.

The Doubledays will also have a new bench boss, as Ralph Wheeler was replaced by Patrick Anderson in December. Andersen spent the 2019 season managing the Washington Nationals' Class A team in Hagerstown.

As professional sports leagues in North America outline return-to-play plans, the Doubledays and the New York-Penn League are brainstorming ways to make the fan experience safe while also following guidelines from government and health officials. According to Lindberg, it's been suggested that New York-Penn League teams allow families to attend games with adequate spacing between those not attending games together. There's also consideration to installing Plexiglass at concession stands to separate employees from customers, similar to what's been done at many grocery stores.

If the season were to start on time, or at all, Lindberg said he has 8-10 interns that are ready to go "at a moment's notice." The Doubledays will also continue to lean on community members for player housing, which has not seen a decline in interest.

"All of the families I've talked to so far, even in this coronavirus pandemic, have all been so welcoming and they still want to host the players because they know how beneficial it can be ... not just for the player but the host as well," Lindberg said. "So far, everyone I've talked to has been more than receptive to hosting players."

Lindberg also communicated with season ticket holders about the upcoming season and he'll address what precautions will be taken at the ballpark when it's the appropriate time.

Some season ticket holders have already made payments. If the season is canceled, a plan will be developed on how to handle refunds.

"Right now I would say just about everybody I've talked to is looking forward to coming back for the season, and they're kinda itching for it. They're all anxious and ready to get back to it," Lindberg said. "I've let them know that once there's a plan officially in place, that'll be shared with them.

"I've talked to a couple that might be unsure right now with everything going on. It's just making sure we have a plan in place to make sure everyone's safe and comfortable with coming to our ballpark. If somebody doesn't feel safe, we're gonna work with them."

Expected to start their 2020 season next week, the Auburn Doubledays will instead have to wait patiently to take the field.

The Doubledays' Ricardo Mendez runs out to the field during team introductions prior to the 2018 season opener at Falcon Park.

A fan waits at the concession stand at Falcon Park during a game between the Doubledays and Mahoning Valley Scrappers in 2018. Doubledays officials are considering installing Plexiglass dividers at concession stands for the 2020 season.