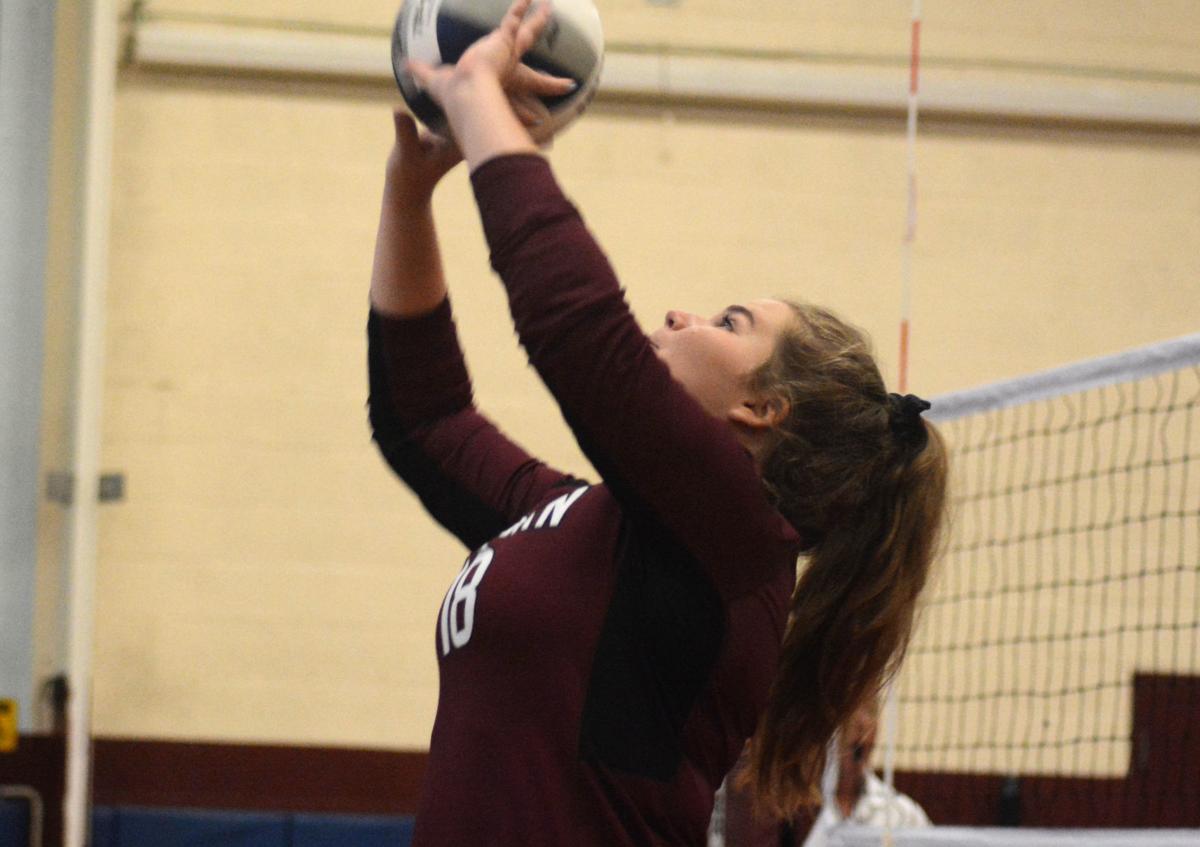 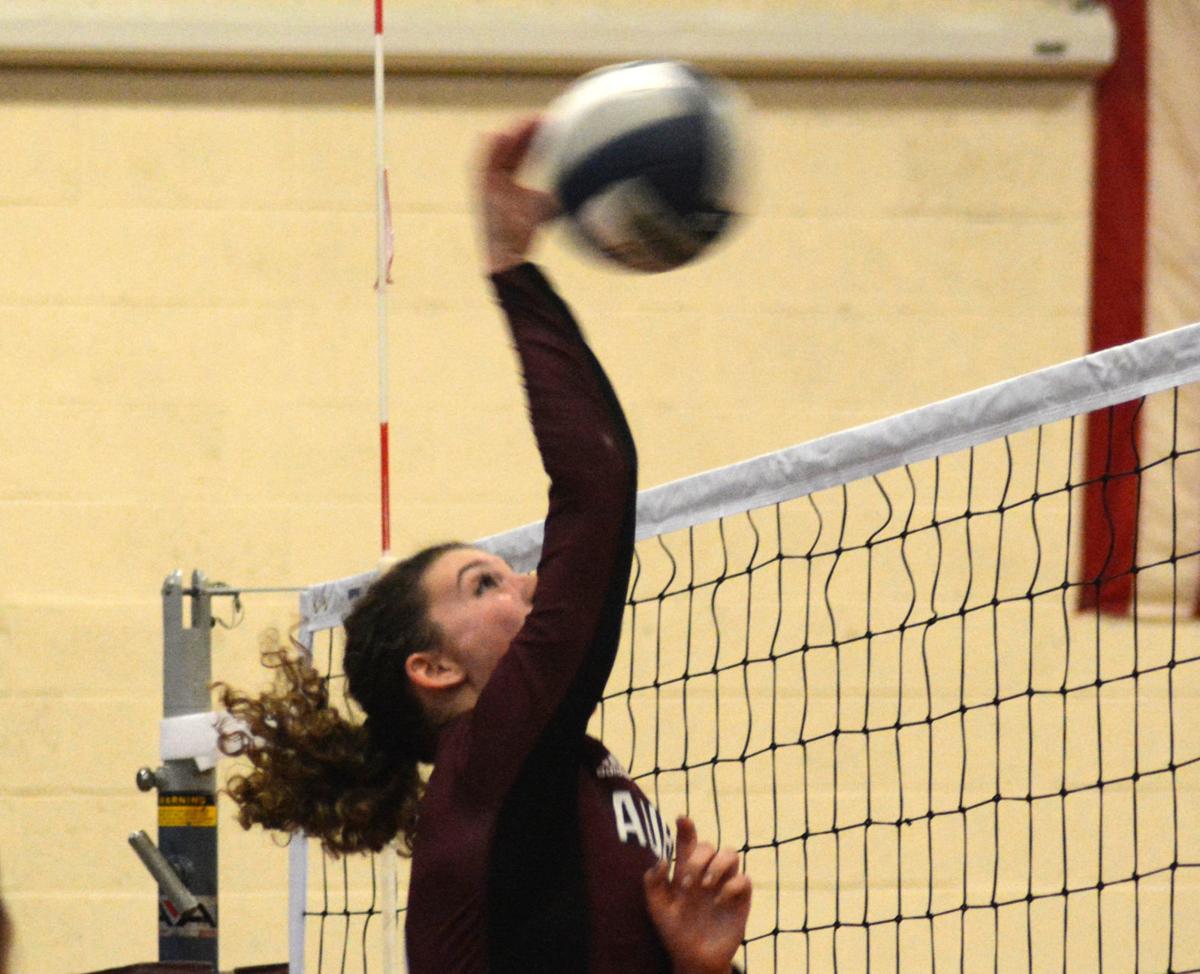 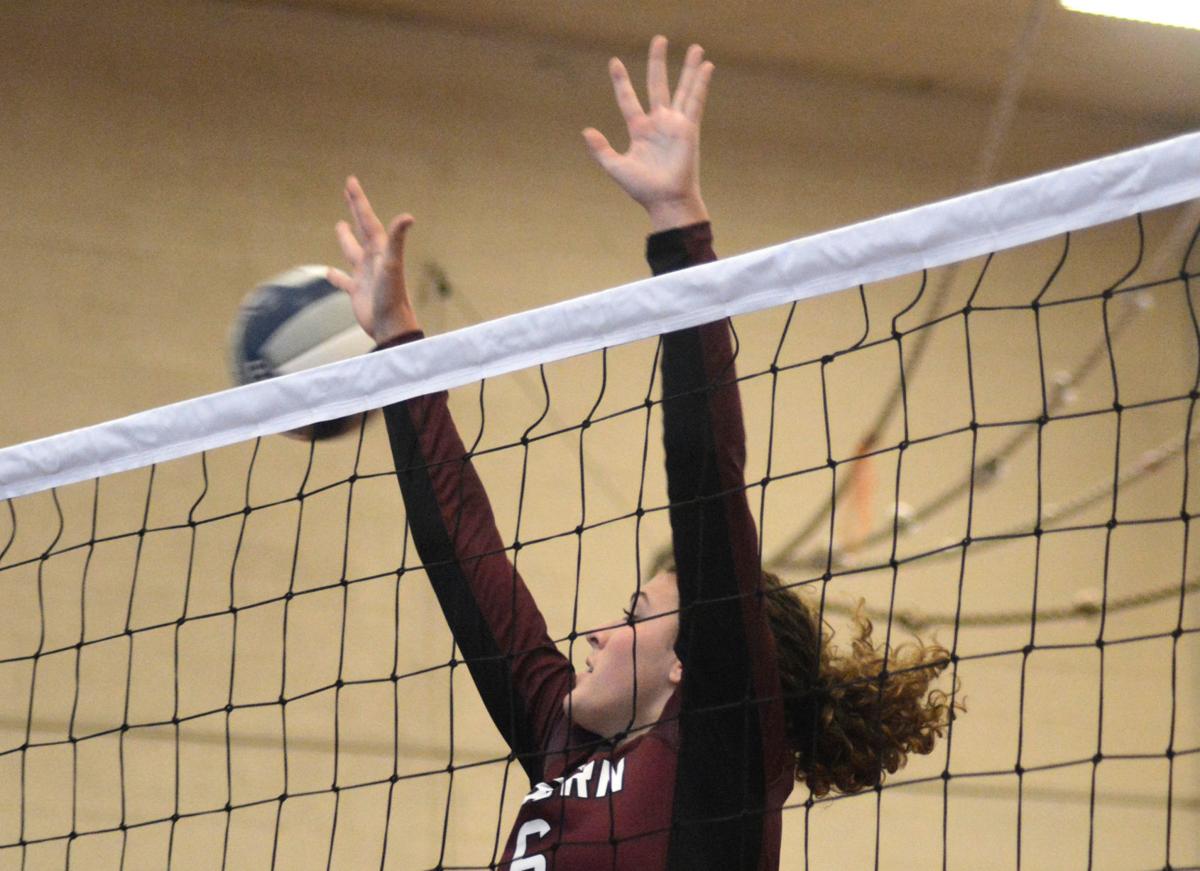 Auburn's Shelby Weeks goes up for a block against Central Square at Seward Elementary Monday.

AUBURN — Auburn couldn't get out of a tailspin in the deciding set.

The Maroons led by a set twice but the RedHawks rallied and took control in the fifth, as the Auburn volleyball team was outlasted by Central Square 3-2 at Seward Elementary Monday.

"We're a young team and we only have one win under our belt. The girls are still learning to trust each other and learning how to win," Maroons coach Kim Doan said. "They get in their heads, and once that happens, it's hard to get them back."

"She takes it really to heart, every play," Doan said of Dean. "She's a key player and she keeps her head in the game. ... She never quit from the beginning to the end."

Lexy Driscoll added 10 digs, four aces, four kills and an assist. Grace Morgan and Lily Snyder (one ace, one assist) each finished with nine digs, while Kailee Brooks had eight digs and one kill.

The Maroons fell behind early in the first set and trailed most of the way. Auburn was able to tie the score at 23-23 and wrapped up the first set with a 26-24 victory.

"My girls are a come-from-behind team. When they're in the right situation and they get their mindset correct, they get a couple points and they go with the momentum," Doan said. "That's what happened with the win on that one."

After dropping the second frame 25-11, the Maroons were able to turn the tables and pick up a 25-10 victory in the third to take a 2-1 overall lead.

"It's all a head game with these guys," Doan said. "If they don't get the points right off the bat, it's a struggle to turn it around. But if they get some key points, then it makes all the difference."

The lead changed hands seven times in the back-and-forth fourth set. Auburn led 23-22, but Central Square was able to force a fifth set by collecting the final three points.

The RedHawks rode the momentum and jumped out to a 14-1 lead in the deciding set, and then cruised 25-6 to seal the win.

Auburn (1-3) looks to get back in the win column when it hosts Jamesville-DeWitt on Friday.

"J-D is always tough," Doan said. "They have a longtime coach, and they always have strong players who can hit. We just have to be ready for them."

For family members and friends of Auburn native Tim Locastro, they won't forget where they were in the afternoon of July 31, 2019.

It's been a slow start to the season for the Arizona Diamondbacks, but Auburn native Tim Locastro played a key role in the club's first win in 2020.

Tim Locastro made his first start of the season in the Arizona Diamondbacks' 11-2 loss to the Los Angeles Dodgers Saturday night.

When Arizona Diamondbacks outfielder Tim Locastro saw that Eduardo Escobar's hit was headed toward the gap in right-center field, he sprinted …

Patrick Mahomes is No. 4, not No. 1. Josh Allen made the list. Carson Wentz was snubbed.

Due to travel restrictions and New York's current guidance on spectators at racing facilities, Weedsport Speedway has canceled the ESS Legends…

Basketball hoops at Auburn's parks remain off limits, city 'errs on side of caution'

Parks and playgrounds in the city of Auburn have reopened since the start of the COVID-19 pandemic, but certain activities remain banned for t…

Auburn's Shelby Weeks goes up for a block against Central Square at Seward Elementary Monday.