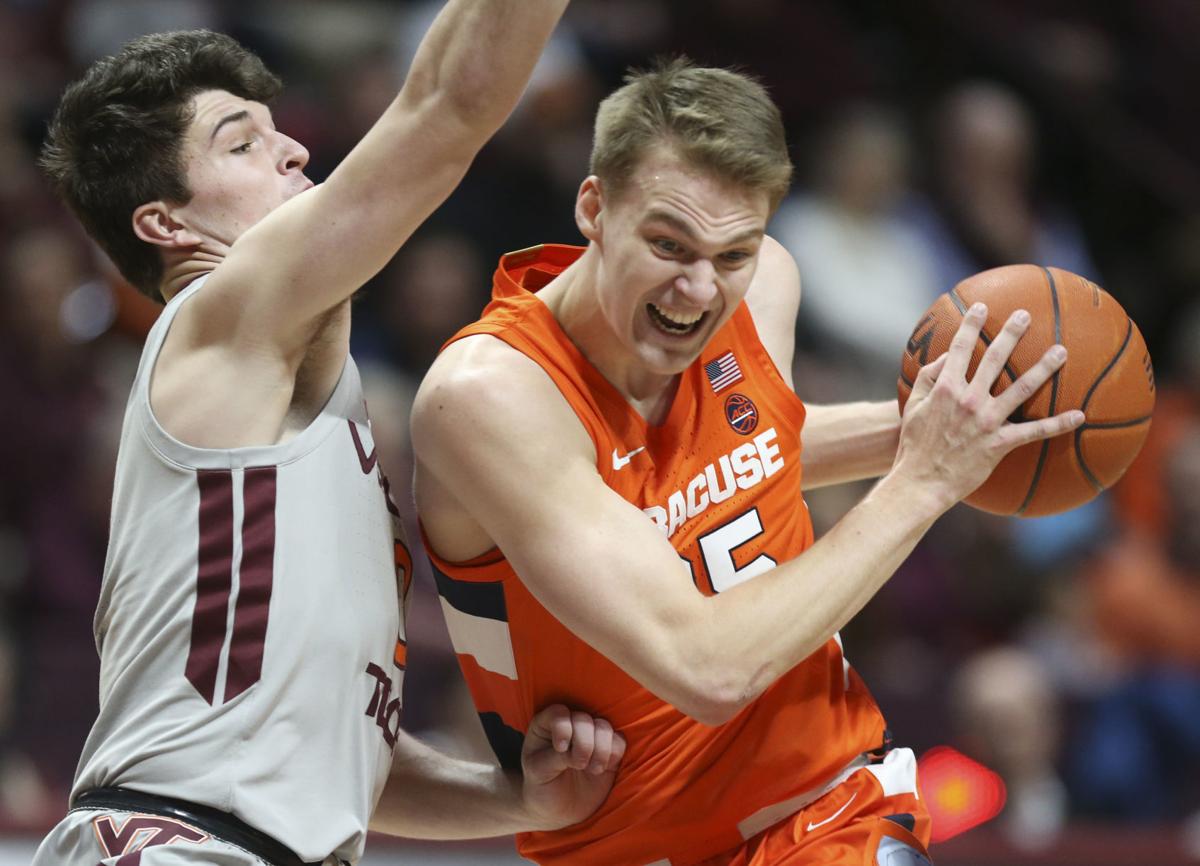 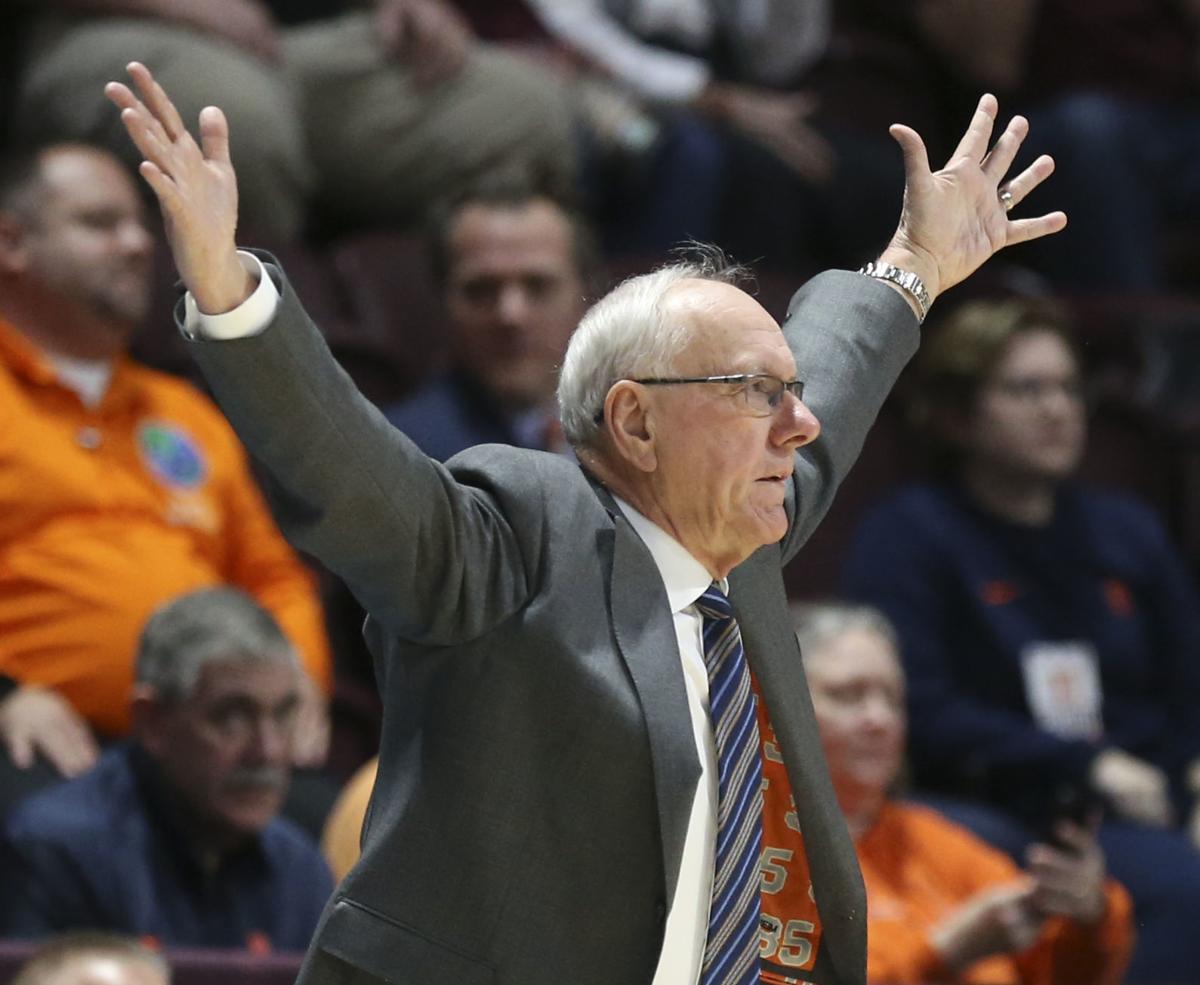 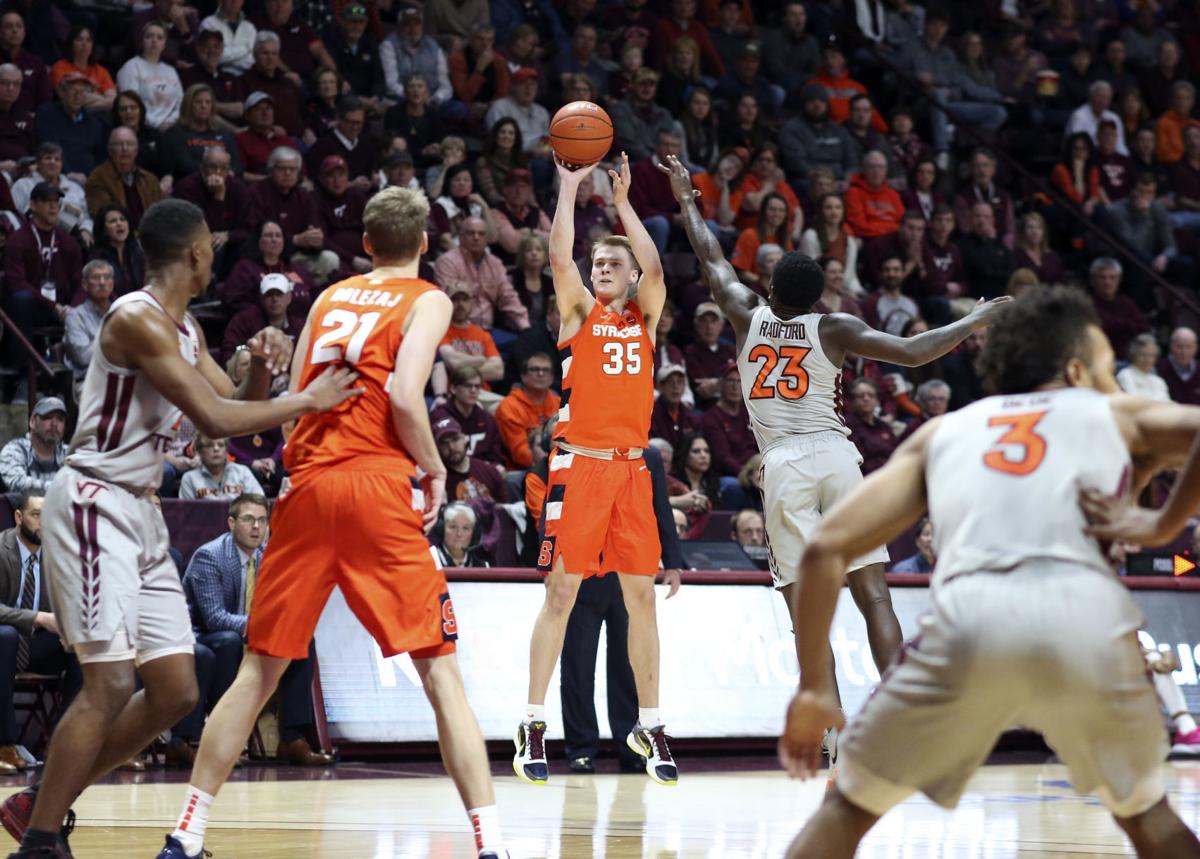 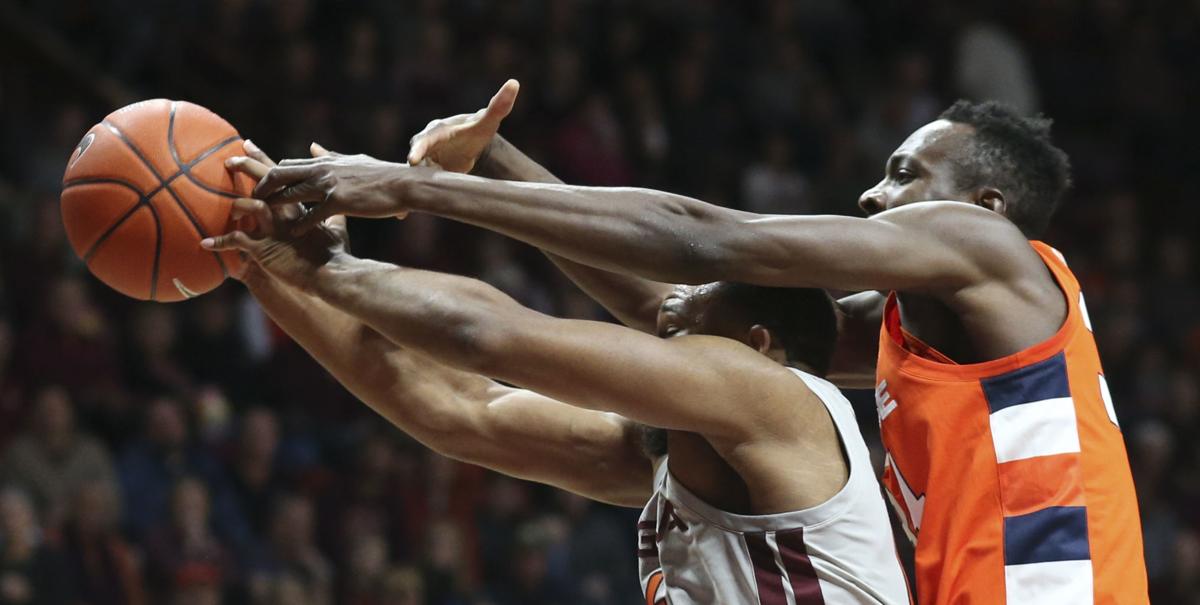 Virginia Tech's P.J. Horne is fouled from behind by Syracuse's Bourama Sidibe Saturday. 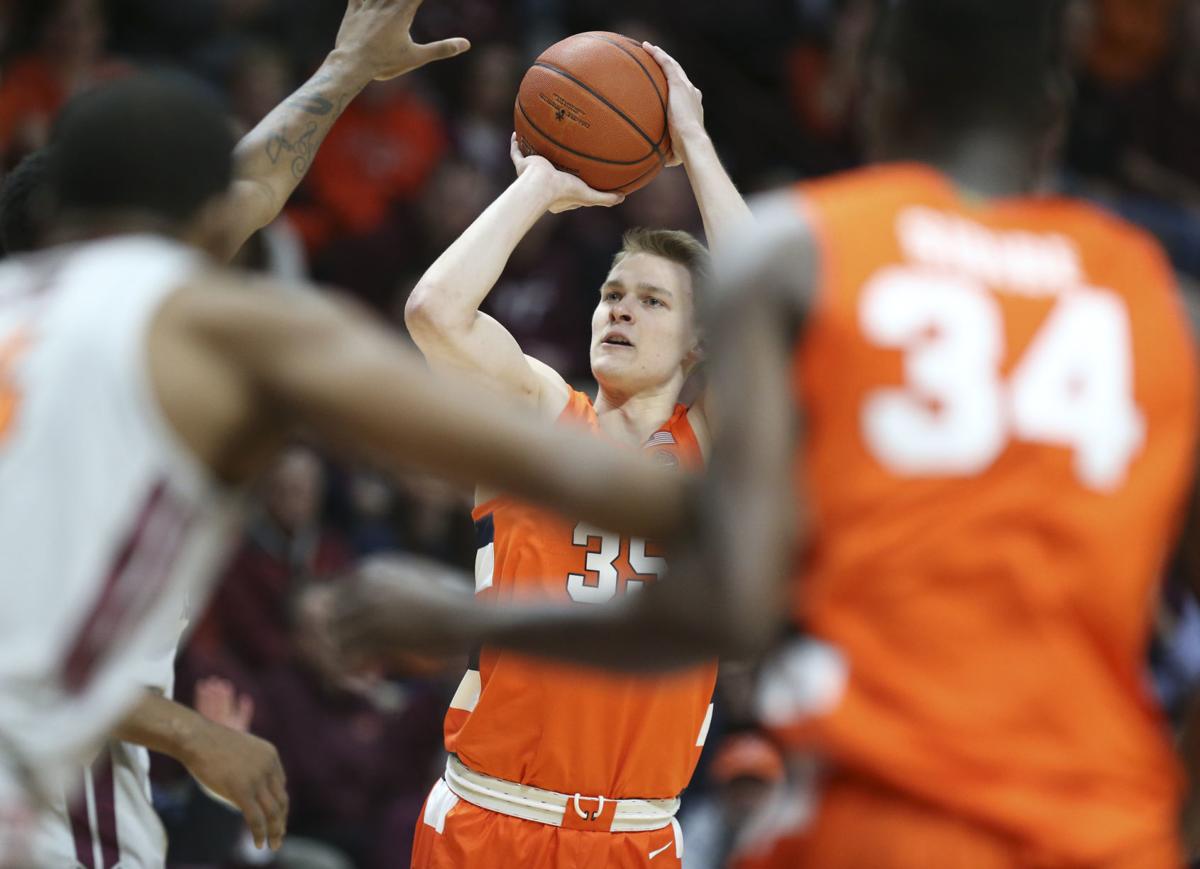 BLACKSBURG, Va. — Virginia Tech fans were having a great time giving Syracuse's Buddy Boeheim a hard time after one of his first shots hit nothing on Saturday.

“Airball! Airball!” the crowd jeered the next few times he touched the ball.

Boeheim silenced them quickly, scoring 18 consecutive Syracuse points in a personal 18-5 first-half run that turned a 14-10 deficit into a 28-19 lead, sending the Orange on the way to their third straight victory, 71-69.

Boeheim's first basket was a 3-pointer, “and then I was able to just get in a groove from there, get to the lane and make plays.” he said. “... Once I got in a rhythm, my teammates were finding me and that was a lot of fun, winning.”

Boeheim finished with five 3-pointers, one from well behind the line, and 26 points for the Orange (11-7, 4-3 Atlantic Coast Conference), who avenged a 67-63 loss to the Hokies on their floor 11 days ago.

The Orange led by as many as 16 in the first half, but had to hang on as the Hokies got within a point three times in the final two minutes.

Wabissa Bede had a chance to tie it when he scored and was fouled with 40 seconds left, but he missed the free throw. After the Orange had a shot-clock violation, the Hokies (13-5, 4-3) called a timeout with 7.4 seconds left trailing 70-69. Landers Nolley, who scored 13, missed a deep 3-pointer from the top of the key and Marek Dolezaj rebounded, preserving the victory.

“We made the wrong play,” Hokies coach Mike Young said of Nolley's shot. “That's on Mike Young. That's not on my team. ... I've got to do a better job of putting them in place.”

Orange coach Jim Boeheim was pleased with the final sequence.

“I just didn't want to get anything where they're going to the basket and you've got a foul situation there,” he said.

He also was pleased with the job his team did slowing Nolley, a five-time league rookie of the week already who is averaging 18 points. In each game, he's managed just 13 while missing 21 of 30 shots and 20 of 24 3-point tries.

“He got some good looks but we were pushing up on him pretty good, making him a little off balance,” the coach said.

Nahiem Alleyne made five 3-pointers and scored 17 for the Hokies. Jalen Cone added 14 points, all in the first half.

Elijah Hughes added 17 points and Dolezaj had 11 points and 11 rebounds for the Orange, who won at Virginia a week ago and then at home against Boston College.

“Confidence,” Hughes said of the difference in the the team during the winning streak. “We just feel really good. Guys are playing really well.”

Syracuse: Boeheim made six shots in a row during his 18-point string for the Orange, including three 3-pointers, one from about 25 feet. It was Boeheim who also hit a 3-pointer from about 30 feet to beat the shot clock in Syracuse's overtime victory at Virginia a week earlier.

Virginia Tech: Cone, a freshman, didn't appear to have any jitters in his first career start. He hit back-to-back 3-pointers, the second with 16:32 left in the half, causing the Orange to call a timeout. Cone is now 34 for 61 (55.7%) on the season from 3-point territory. ... The Hokies had just seven turnovers, but two came immediately after they pulled within 55-53 with 8:32 remaining.

Syracuse: The Orange are again on the road, playing at Notre Dame on Wednesday night.

The New York Department of Environmental Conservation has released its 2019-20 deer hunting estimates, and according to the report hunters in …

Nate Kennedy: Fishing is made for social distancing

The New York Department of Environmental Conservation has released its 2019-20 deer hunting estimates, and according to the report hunters in …

In a new installment of "From the Cheap Seats," sports reporter Justin Ritzel looks back on Auburn hockey's overtime win over New Hartford in the 2018 section semifinal.

SYRACUSE — Former Syracuse football coach Frank Maloney, who succeeded the winningest coach in school history when the program was in decline,…

In a new installment of "From the Cheap Seats," sports reporter Justin Ritzel looks back on Auburn hockey's overtime win over New Hartford in the 2018 section semifinal.

Virginia Tech's P.J. Horne is fouled from behind by Syracuse's Bourama Sidibe Saturday.