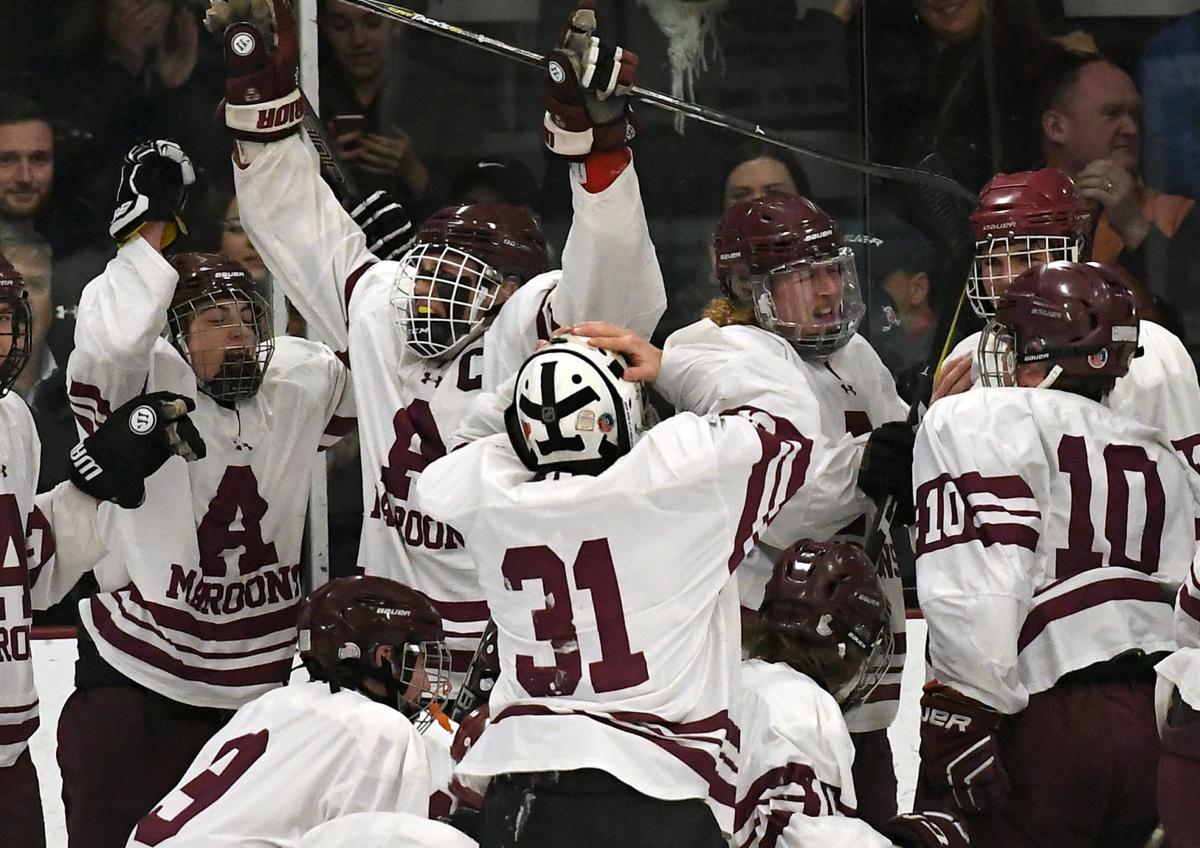 Auburn's Jake Morin raises his arms in celebration after scoring the game-winning goal in overtime to defeat New Hartford 3-2 in the Section III Division II semifinal game at Casey Park in 2018. 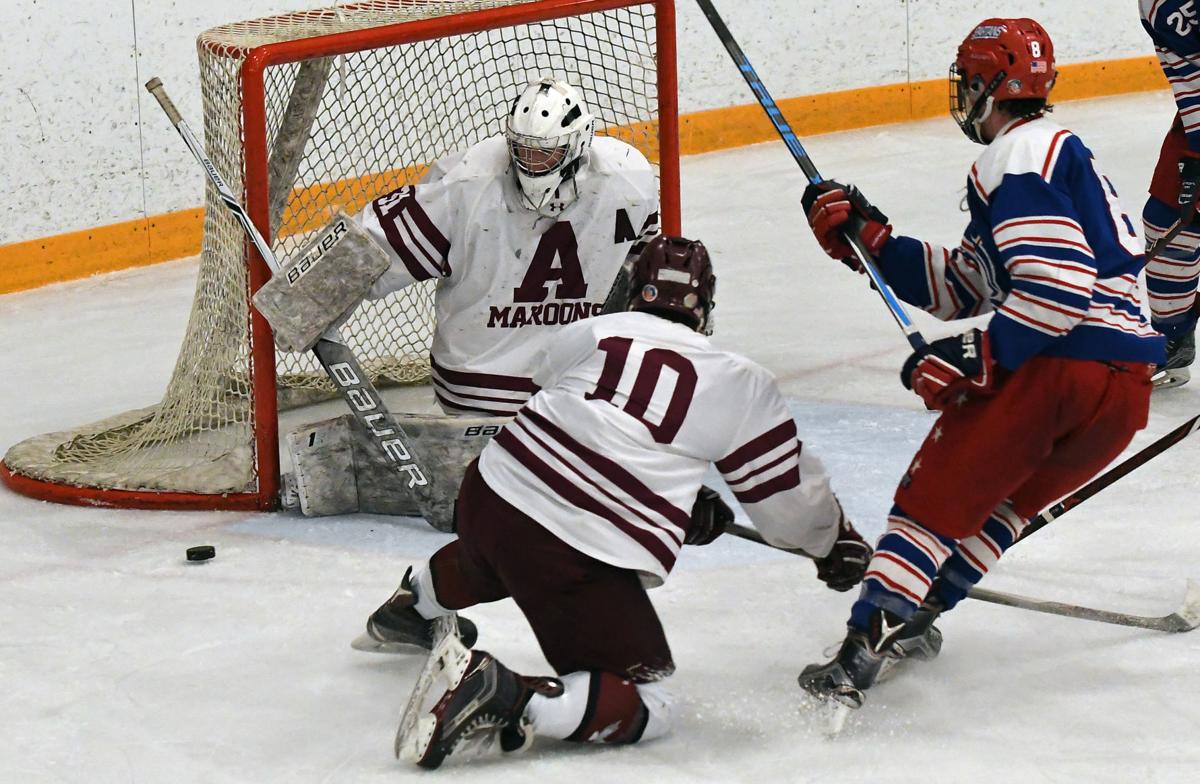 Auburn goalie Jack Kalabanka makes a save against New Hartford in the Section III Division II semifinal game at Casey park in 2018.

Editor's note: With sports on hiatus due to coronavirus, sports reporter Justin Ritzel is looking back on memorable high school games from his time with The Citizen in a series called From the Cheap Seats. All stories in this series can be found at auburnpub.com.

Auburn hockey was a formidable team in 2018. The Maroons boasted arguably the two best high school players in the state with senior Jacob Morin and Johnny Malandruccolo, veteran goalie Jack Kalabanka, and a solid group of role players.

All needed to be at their best if Auburn was to capture its second-ever section title. The Maroons were not the top seed in the 2018 Section III Division II tournament. That designation belonged to Route 20 rival Skaneateles.

After the Maroons easily dispatched Oswego on the opening round of that sectional tournament, another trip to Skaneateles to visit the crosstown rival seemed likely. Auburn had lost 5-1 at Skaneateles the previous month, the Skaneateles YMCA has been a difficult place for any visiting team to exit with a win.

But the Lakers were stunned at home by an upstart New Hartford team, meaning Auburn had another home game, this time against the suddenly dangerous Spartans.

The two teams were quite familiar with each other, having played two close contests to close out the regular season.

After an uneventful first period, New Hartford had Auburn on its heels in the second, and the Maroons escaped the middle frame thanks to some big-time stops from Kalabanka.

Both teams scored once in the third, setting up sudden-death overtime.

After 47 1/2 minutes — three full periods and a snippet of overtime — a goal by Morin sent Auburn to its first section final game since 2014.

"The legs feed the wolf, gentlemen," Herb Brooks, portrayed by Kurt Russell, told the U.S. Olympic hockey team in the film "Miracle." I was reminded of that saying in my post-game interviews. Both Malandruccolo and coach Mike Lowe said to me after the game that the difference for the Maroons was having "more legs."

"Throughout the game we thought we were catching up on them," Malandruccolo said. "We just kept fighting and got the job done."

Ain't that the truth. It was a hustle play from Malandruccolo that got the puck to Williams, who set up Morin for the winner.

Auburn won two more games that year, beating Clinton in the section final and Ogdensburg in the state quarterfinal, before bowing out to Section VI's Sweet Home in the state semifinals.

Malandruccolo was The Citizen's Player of the Year the following season, his senior season, and I asked him if any game from his career stood out above the others. He said the win at Ogdensburg. Coach Lowe has also referenced that game to me numerous times in the two years since in our chats.

Who could blame them? There's something special about traveling 2 1/2 hours north along the St. Lawrence River to the Golden Dome, Ogdensburg's home rink, and winning a state tournament game in a raucous atmosphere. That barn — hockey slang for arena — and that drive north was something I'll never forget myself.

But that trip never happens if the Maroons don't fend off an upset-minded New Hartford team. For a handful of Auburn players, like Morin, Kalabanka, defenseman Aidan Hastings, and others, that game was the last they'd play at Casey Park.

More and more, reporters that cover high school sports utilize Twitter to send out video clips of important plays. Until recently, I've always been hesitant to do so because it's harder to follow a game when you're observing through the camera on your iPhone.

When Morin scored the overtime winner, I was standing in the corner of the rink of Casey Park, capturing video through the glass. It was probably one of the first times I tried to capture highlights during a high school game. Over two years later, the YouTube video has over a thousand views.

Every once in a while it pops up on my YouTube feed. Looking back, it's cool to see Malandruccolo force a turnover and get the puck to Williams; Williams send a no-look pass from the goal line to Morin in front; Morin banging home a one-timer, briefly stumbling in celebration, and then charging to Auburn's own end of the ice to celebrate with the rest of his teammates.

A special moment in a special season.

Great absence: Great Race's 43rd year unlike any other

Debuting in 1978, the Myles Keogh Paddle Wheel and Run has been a staple on the summer calendar for competitive runners, bicyclists and canoei…

While school districts in New York state have been given the go-ahead to reopen in September by Gov. Andrew Cuomo, there has been no indicatio…

The signage is familiar. And well, really, that's about it. But hey, it beats nothing. Or, to be more precise for the Toronto Blue Jays, it be…

Auburn native Tim Locastro didn't have to swing to get his first run batted in of the 2020 season.

Auburn's Jake Morin raises his arms in celebration after scoring the game-winning goal in overtime to defeat New Hartford 3-2 in the Section III Division II semifinal game at Casey Park in 2018.

Auburn goalie Jack Kalabanka makes a save against New Hartford in the Section III Division II semifinal game at Casey park in 2018.