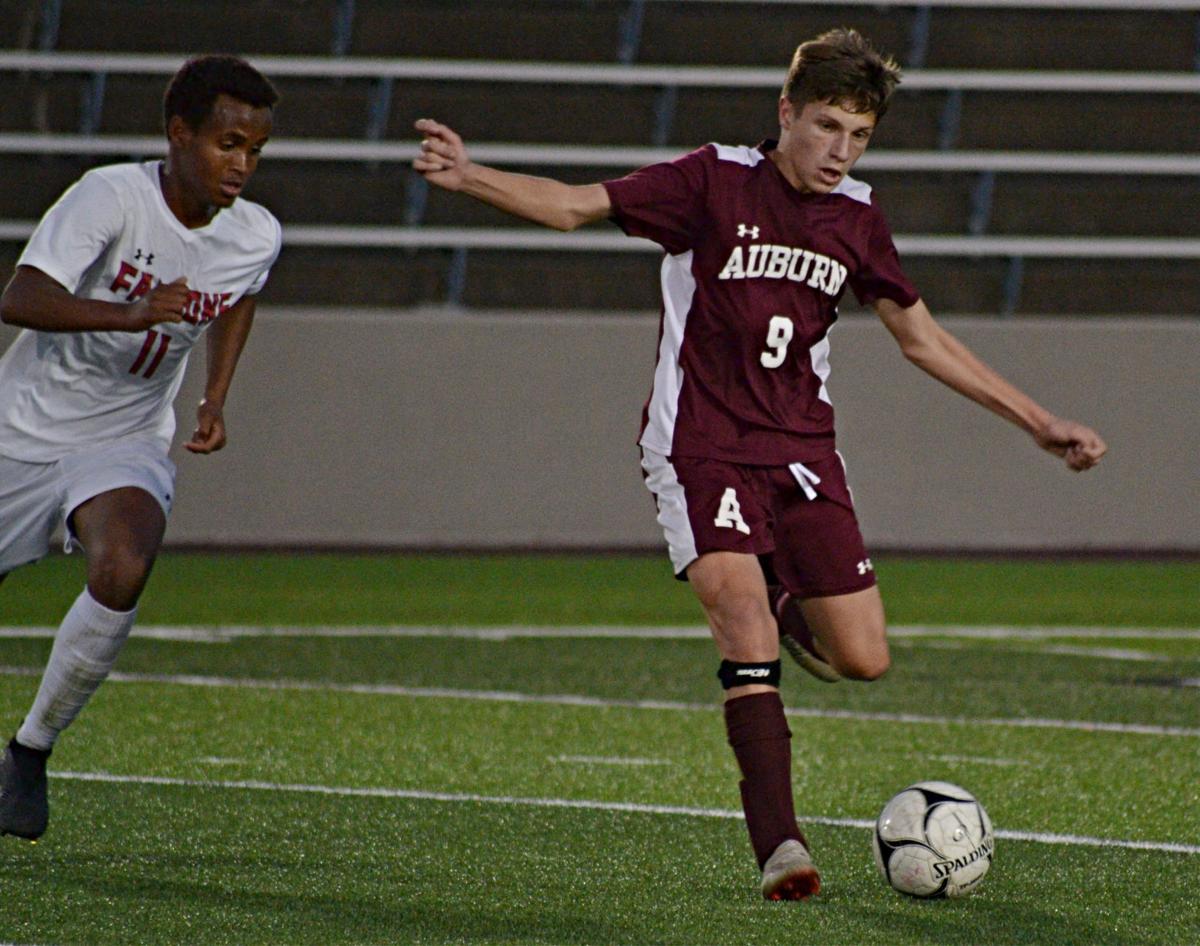 Auburn's Gabriel Volo kicks the ball away against Fowler Tuesday at Holland Stadium. 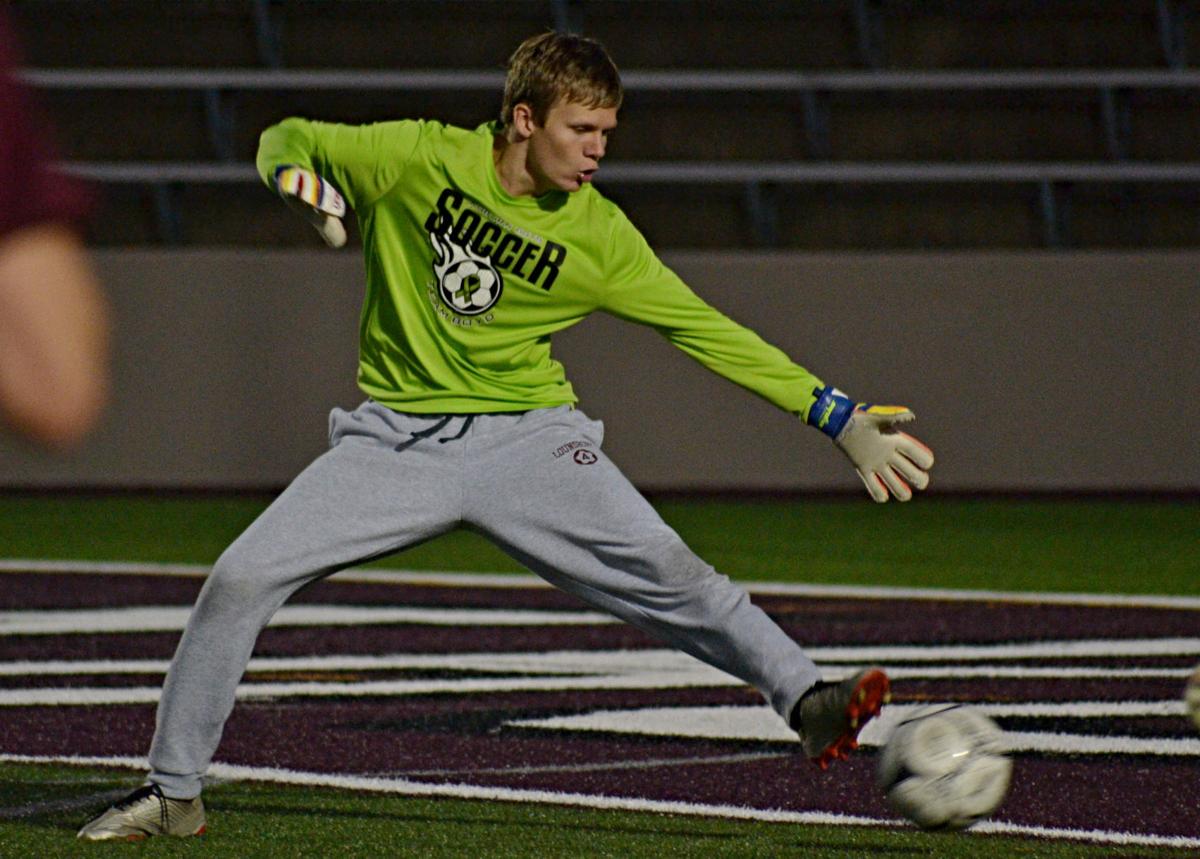 AUBURN — Injuries and subsequent depth have been issues early in the season for Auburn boys soccer.

Each reared its ugly head for the Maroons in a 5-0 loss to Fowler Tuesday at Holland Stadium.

Auburn, now with five games under its belt this season, held tough with the Falcons for the first 35 minutes of the game, but Fowler nabbed two goals late in the first half, then scored twice more in the second half for the win.

"It's been a rough start for us," Auburn coach John Dubovici said. "We've been shorthanded with players. We've seen improvement every game against these tough teams, but mistakes have been killing us so far this season.

"This game, we played really well for 35 minutes and then gave up (two) goals in the last three minutes that easily could've been avoided."

The Maroons are without their starting goalkeeper, Colson Nemo, who will miss the remainder of the year with a fractured wrist. Against Fowler, Caleb Lounsbury played the first half and Jackson Engle came in for the second.

Both acquitted themselves nicely despite playing out of position.

"Trying to find someone to fill that position, the guys have done a solid job of stepping up," Dubovici said. "They have to play outside of their comfort zone. This is something we'll have to deal with the rest of the season."

Unfortunately for the Maroons, even perfect goaltending wouldn't have been enough to beat Fowler this time out. With only one or two subs on the bench, opposing teams can wear down Auburn in the first half.

In the second half, all the energy is gone, and that's when the Maroons have been prone to mistakes.

"Once fatigue sets in I think that's where we lose it against some of these teams, because we just don't have the depth," Dubovici said. "It's been the same story for the last three games. For the first half hour we're able to create chances, and then once guys get tired that's when we start making mistakes and turning the ball over."

Auburn has eight seniors and they'll be leaned on heavily for the rest of the season. Dubovici is also encouraged by some of his younger players — freshman Miron Carter is one of the team's top defenders, while another freshman, Gabriel Volo, saw extensive playing time against the Falcons.

"We have a very talented senior group. These guys have been playing for some time," Dubovici said. "Also our younger group, guys are in good shape and have been playing year-round. We can play with anybody when we play as a group."

Auburn is scheduled to take on Jamesville-DeWitt Thursday on the road.

After a busy weekend of match play, The Citizen Masters bowling tournaments are down to their final eight competitors.

Fausto Segura, a Washington Nationals pitching prospect who last played for the Auburn Doubledays during the 2019 season, died in a motorcycle…

Last weekend, the Auburn Ice Hawks 8U mites hockey team won its third tournament of the season, capturing the championship of the Southern Tie…

After two weekends packed with matches and qualifying games, The Citizen Masters Open Bowling Tournament is down to the final eight competitors.

The field in the The Citizen Masters Women's Bowling Tournament has been cut in half, and by the end of the upcoming weekend, one person will …

Emma Stark scored 20 points to help lead the Weedsport girls basketball team to a 72-42 victory over LaFayette on Thursday night.

Qualifying rounds are complete and the brackets are set for The Citizen Masters bowling tournaments in 2020.

Buffalo Bills, officiating and moving on

Nearly a week after the Buffalo Bills blew a 16-point lead and lost a playoff game, some fans are still upset. A good chunk of Bills Mafia tha…

Auburn's Gabriel Volo kicks the ball away against Fowler Tuesday at Holland Stadium.