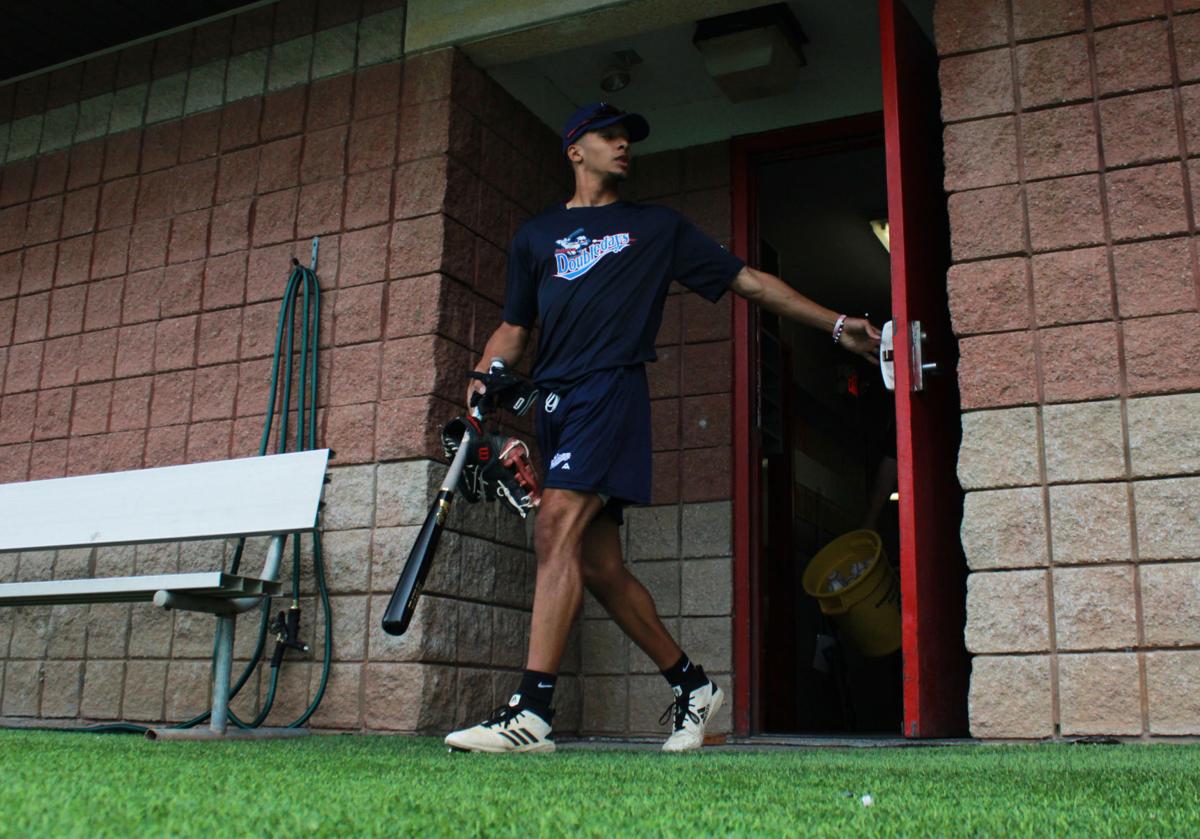 Doubledays players exit the clubhouse to hit the field for a practice Wednesday at Falcon Park. 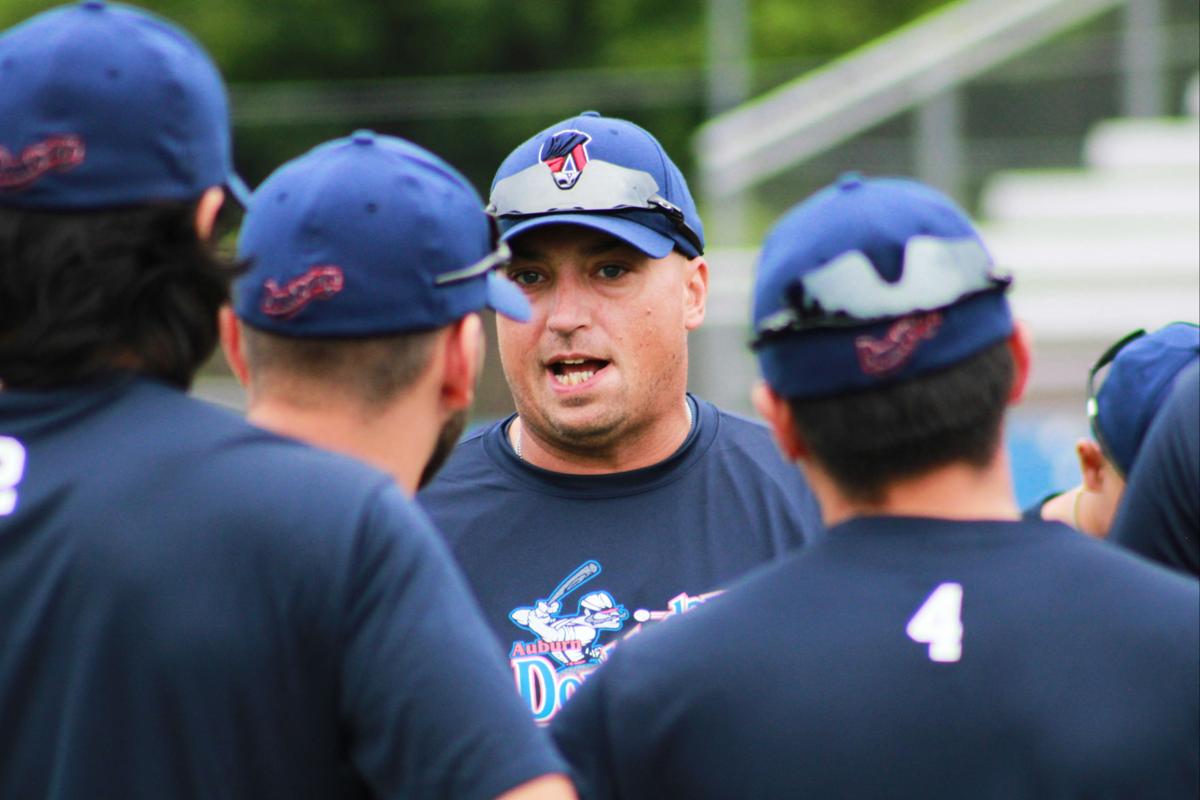 AUBURN — The digital scoreboard beyond the outfield wall displayed graphics of Auburn's lengthy baseball history, commemorating its many years involved with minor league baseball and all the major league affiliations.

This week, Auburn will commence a new era of baseball, but instead of low-level professionals hitting the field, it'll be high-end collegiates.

On Thursday, the Doubledays — the nickname carries over from Auburn's previous iteration — open their first season in the Perfect Game Collegiate Baseball League, on the road at Watertown. Auburn has another road tilt on Friday, at Utica, before its season opener Saturday at Falcon Park against Geneva.

Players from within New York state and as far as California and Texas have arrived to Auburn in recent days, and the team met for two-a-day practices both Tuesday and Wednesday at Falcon Park.

Coaching the Doubledays is Ben Julian, who has previous stops as an assistant at Utica College and with the Perfect Game league's Adirondack team.

Julian's name should be familiar to those who followed the New York-Penn League. His father, Robert was president of the short-season league from 1992 through 2001, and currently holds a role as president of the Perfect Game league.

For Ben Julian, coming to Auburn to coach was a draw, in part, because of the city's rich history with baseball. Auburn's specific interest in the Doubledays, however, waned in its final years with the New York-Penn League, but Julian looks forward to fielding a team that can reinvigorate that excitement.

"That's one of the most exciting things for me, is bring baseball back here," Julian said. "This facility and this city deserves good baseball, and I think the Perfect Game league does provide that. I'm excited to be able to showcase what the league has to offer, and I hope we can garner the love and support that this city has always provided and give everybody something to cheer for, especially during such a weird time in our societal history."

Auburn's transition to join the Perfect Game league was finalized in March, as the city finalized its rental agreement with Don Lewis and Bob Ohmann for the use of Falcon Park. Lewis and Ohmann will serve as co-owners of the Doubledays, with the current rental agreement continuing through 2023.

Because of the timing of the agreement, the Doubledays were late to the game in terms of assembling a roster. In normal circumstances, Perfect Game league rosters are set in October.

With the season fast approaching, the players' arrival has been a whirlwind. There's also the challenge for players to settle into their housing situations and develop quick relationships with their new teammates.

"I don't know anybody on this team, but so far it's been a good vibe," said Erislandy Rives, a pitcher from Hialeah, Florida who was recruited due to his familiarity with Julian. "Right now we're still building those relationships, but I feel like we're gonna have a great summer."

Some players' arrival into Auburn has been hectic. Rives, for example, alluded to issues with his flight into New York.

For others, Falcon Park is a short drive from home. Carson Ashby is an Auburn native who attended Jordan-Elbridge High School. He's currently enrolled at Ithaca College.

While a local product, Ashby is looking forward to the diversity of backgrounds the Doubledays will provide.

"It's going to build a strong chemistry with our team and will lead to a lot of success," Ashby said. "Many of us have goals to get to the next level, whether that's MLB or minor league baseball, whatever it is. I think this is going to prepare us not only for college, but the next level of baseball."

Robert Gruber, a pitcher from Niagara Falls that attends Elmira College, was vaguely familiar with Auburn before his arrival. He was aware of the city's rookie league team and played earlier this spring at Falcon Park.

Others, like Cameron Sheets, had never heard of Auburn until joining the team. Sheets plays for Trinity University in San Antonio, Texas.

"Learning (the Doubledays) were a former minor league team, and that they've had baseball here for about 100 years, I thought that was really cool," Sheets said. "The past two summers I just played at home, Especially with COVID, that's all I could do. Playing out of state sounded really cool, and I want to learn more about baseball's history in Auburn because it sounds really cool."

While the experience of a new city is appealing, the players made it clear they want to deliver on the field. They'll have about 50 games to do so in a season that continues through July 29.

"Everyone agrees that when you're winning it's fun. That's with any sport, but especially baseball," Gruber said. "Everyone wants to get better. This league is filled with a lot of great talent, and it gives everybody an opportunity to compete."

The new Auburn Doubledays will play their first home game of the 2021 season at Leo Pinckney Field at Falcon Park tonight.

Doubledays players exit the clubhouse to hit the field for a practice Wednesday at Falcon Park.