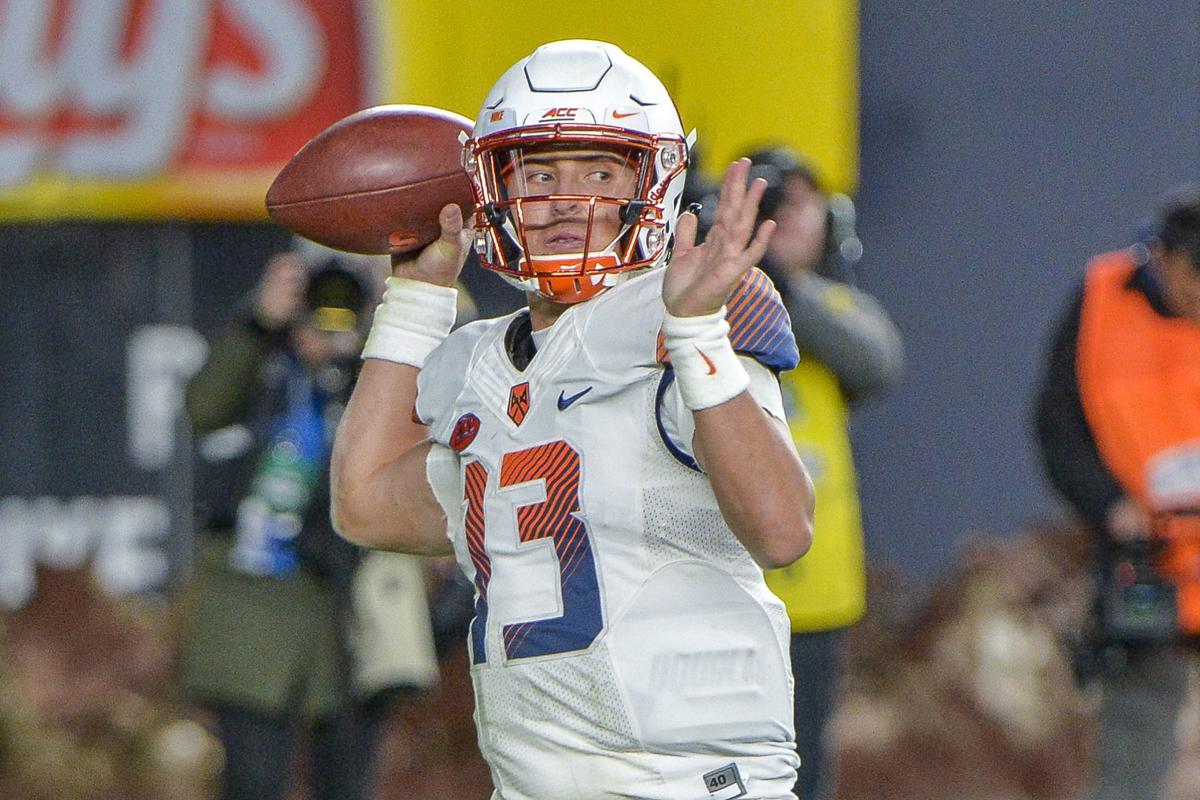 Syracuse quarterback Tommy DeVito throws a pass against Notre Dame Nov. 17, 2018 at Yankee Stadium in New York. The redshirt sophomore is ready to start for the Orange. He's accumulated more experience than most backups. 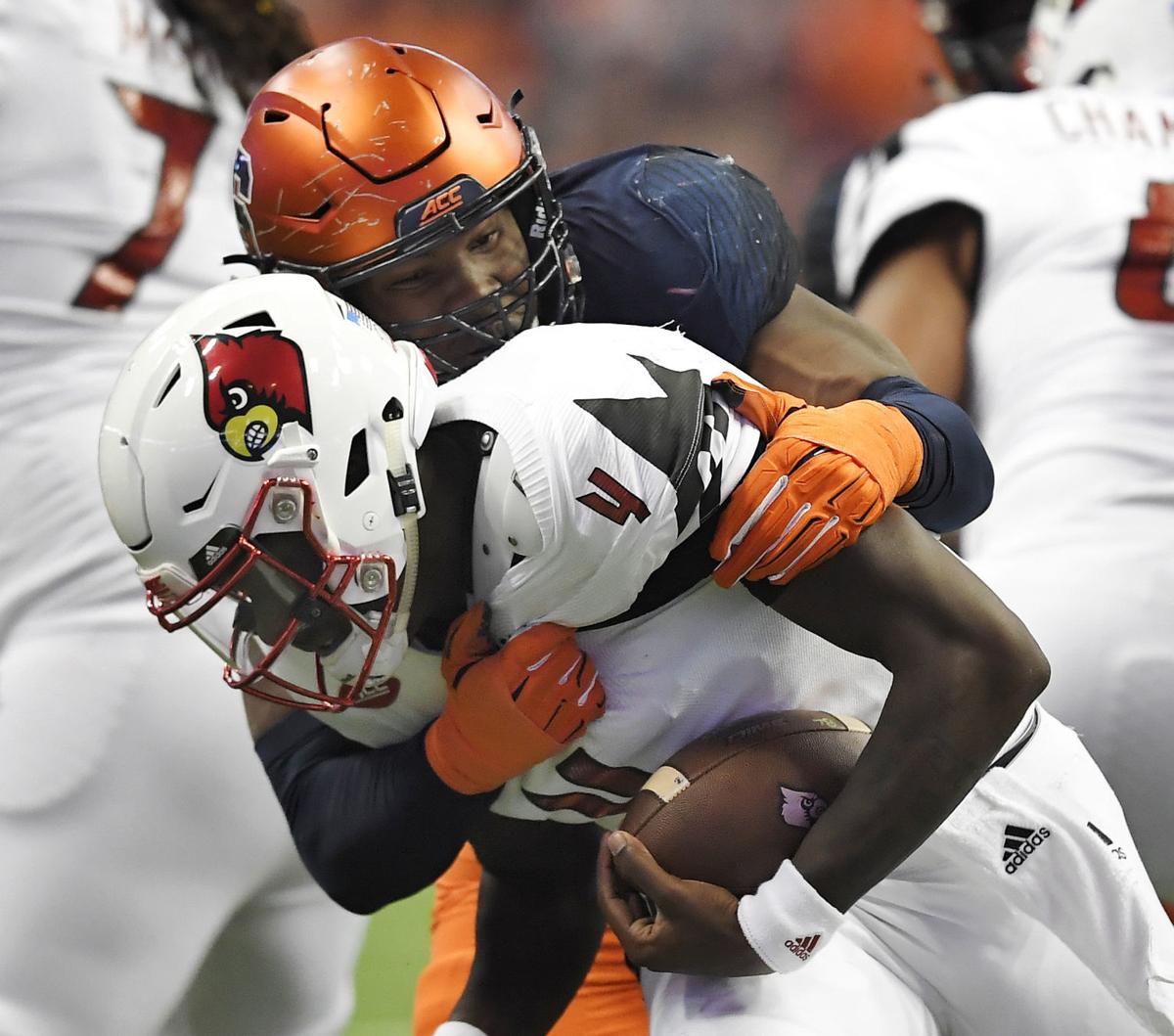 Syracuse defensive lineman Alton Robinson sacks Louisville quarterback Jawon Pass Nov. 9, 2018 in Syracuse. The Orange finished 2018 with 18 interceptions and 13 fumble recoveries, the most turnovers of any Power Five team in the nation. Syracuse returns stalwart defensive ends Robinson and Kendall Coleman, who combined for 20 of the Orange's 43 sacks (10 apiece).

SYRACUSE — Coach Dino Babers begins his fourth season at Syracuse with a big goal — to prove that last season was no fluke.

"We have high expectations, but we've got to go out there and prove ourselves," Babers said.

The key to that sudden success was a high-powered offense keyed by dual-threat quarterback Eric Dungey, an opportunistic defense that produced 31 turnovers, and a near-flawless kicking game. A big piece of that is missing — Dungey ran for 754 yards and 15 TDs and passed for 2,868 and 18 more scores, averaging 278.6 yards of total offense per game in his final year.

Redshirt sophomore Tommy DeVito is ready to step in. He's accumulated more experience than most backups, having taken first-string snaps two straight springs and last summer in place of Dungey, who was nursing injuries.

"It's just fun knowing that everyone's kind of looking at you to be the guy," said the strong-armed DeVito, who is working on adding touch to his throws.

At 6-foot-2 and 212 pounds, DeVito had his moments last fall, rescuing the Orange in wins over North Carolina and Florida State. He finished the season 44 of 87 for 525 yards and four TDs with three picks passing, but he's certainly not a dual threat (minus-17 yards on 23 carries) and he struggled mightily against Notre Dame in place of an injured Dungey, getting sacked six times and throwing two interceptions.

It's all part of the process.

"I think he knows the offense," Babers said. "Last year there were a couple of opportunities where he had an opportunity to be the starting quarterback."

While Babers has succeeded in building depth in the lineup, there's not much to fall back on at quarterback if DeVito gets injured. Redshirt senior Clayton Welch, a junior college transfer, is listed as the backup on the preseason depth chart and has yet to throw a pass for the Orange.

Other things to know about Syracuse:

Babers is quick to point to his defense as a big key to the upcoming season. The Orange finished 2018 with 18 interceptions and 13 fumble recoveries, the most turnovers of any Power Five team in the nation. Syracuse returns stalwart defensive ends Alton Robinson and Kendall Coleman, who combined for 20 of the Orange's 43 sacks (10 apiece), and everyone is back in the secondary. Babers has to replace his two leading tacklers, LBs Ryan Guthrie (107) and Kielan Whitner (100), and former Cornell wrestler Ben Honis is in the mix after transferring. The downside is that defensive tackle McKinley Williams is out indefinitely with a foot injury.

DeVito will have some nice targets to throw to. Michigan State transfer Trishton Jackson, a former four-star prospect, has sparkled in preseason. Taj Harris broke Shelby Hill's record for most receiving yards by a freshman, tying sophomore teammate Nykeim Johnson with 565 yards, behind only Sean Riley (756), and Jamal Custis (906), who graduated.

Syracuse starts the season with road games against Liberty and Maryland before returning home to the Carrier Dome to face reigning national champion Clemson on Sept. 14. Syracuse is the only team besides Alabama to beat the Tigers in the past two seasons and nearly upset them on the road last fall, losing 27-23 on a TD by tailback Travis Etienne in the final minute. Syracuse's other nonconference games are home against Western Michigan and Holy Cross.

The Orange were unbeaten at home last year.

"When you win a game, you always feel like you've got the belief that you can win another," Babers said. "You've seen the mountaintop. You've seen what it looks like. You know how difficult it is. We know we can, but that doesn't mean you will."

Syracuse has to replace three starters on the offensive line, another big key to the season. Aaron Servais has been seeing time at center, junior college addition Darius Tisdale and graduate transfer Ryan Alexander are newcomers in the mix, and C/G Sam Heckel has returned to practice from an injury. The Orange have plenty of size up front in guards Dakota Davis (6-5, 327) and Evan Adams (6-6, 352) to help protect DeVito and open holes for TB Moe Neal. In his final year, Neal is 286 yards shy of 2,000 career rushing yards and his career average of 5.44 yards per carry is fifth all-time at Syracuse, not far behind the top two — Ernie Davis (6.63) and Jim Brown (5.79).

I GET A KICK OUT OF YOU

Punter Sterling Hofrichter and place-kicker Andre Szmyt give the Orange a striking advantage in special teams. Szmyt won the Lou Groza Award last year as the top kicker in the nation (30 of 34 field goals and all 61 extra-point attempts), leading the country with 151 points. Hofrichter averaged 42.9 yards per punt and 17 of his 67 kicks traveled over 50 yards, 26 of them downed inside the 20-yard line, tops in the ACC.

"When you have good defense and good special teams, good things should happen," Babers said.

Syracuse quarterback Tommy DeVito throws a pass against Notre Dame Nov. 17, 2018 at Yankee Stadium in New York. The redshirt sophomore is ready to start for the Orange. He's accumulated more experience than most backups.

Syracuse defensive lineman Alton Robinson sacks Louisville quarterback Jawon Pass Nov. 9, 2018 in Syracuse. The Orange finished 2018 with 18 interceptions and 13 fumble recoveries, the most turnovers of any Power Five team in the nation. Syracuse returns stalwart defensive ends Robinson and Kendall Coleman, who combined for 20 of the Orange's 43 sacks (10 apiece).