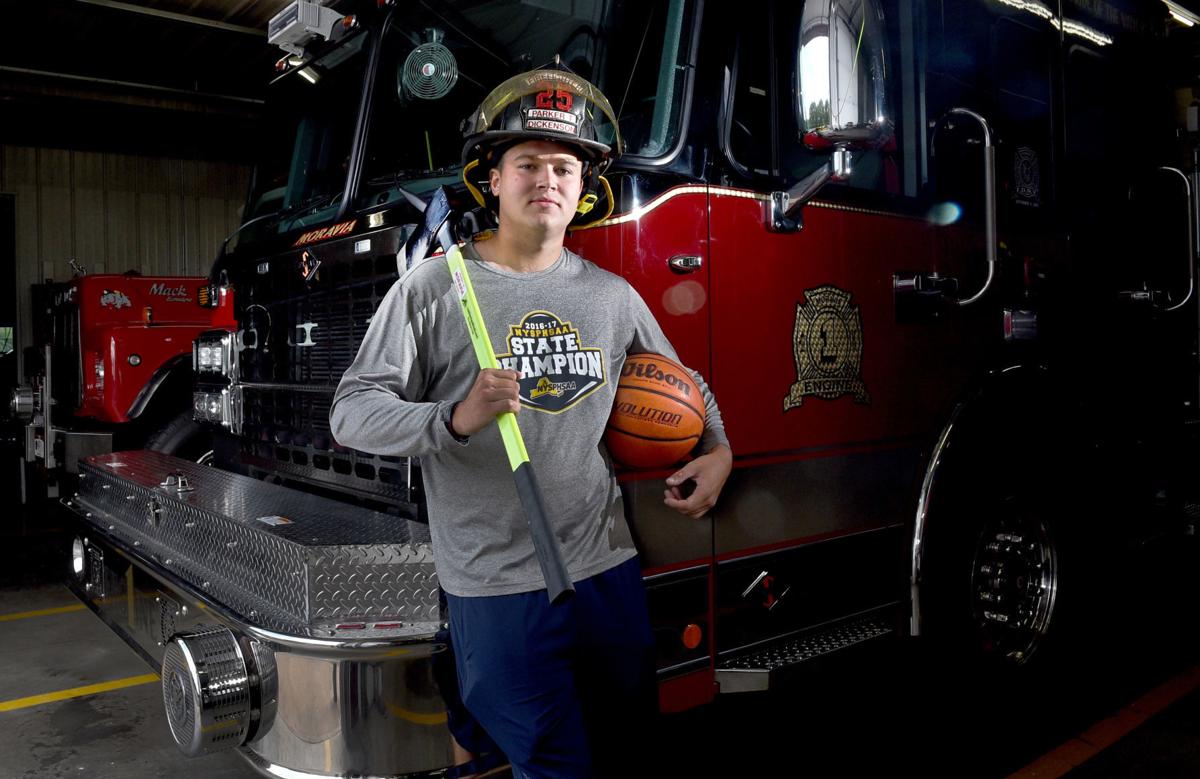 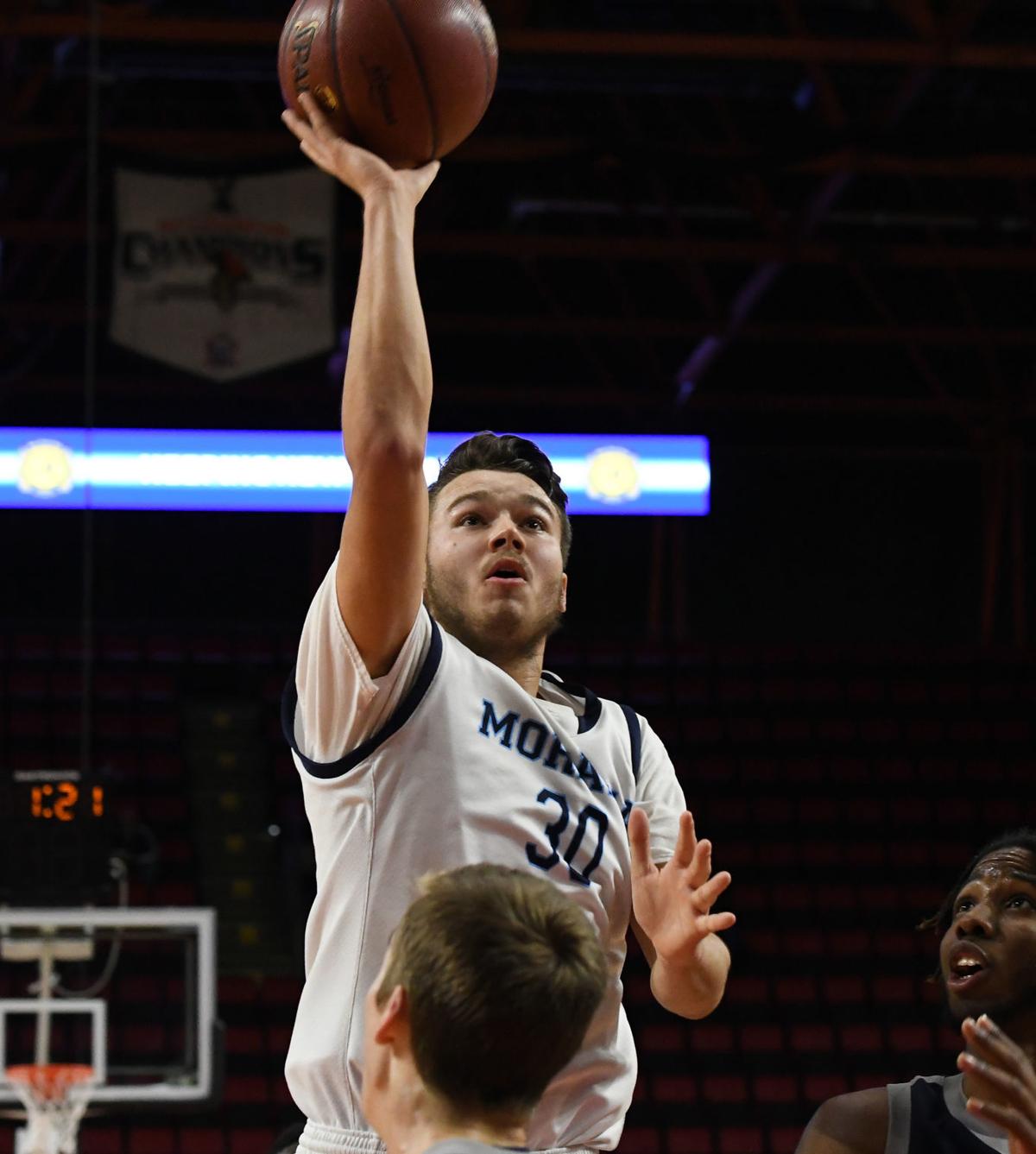 Moravia's Parker Dickenson shoots a floater against Stony Brook during the NYSPHSAA Class C semifinal game in Binghamton in 2017. 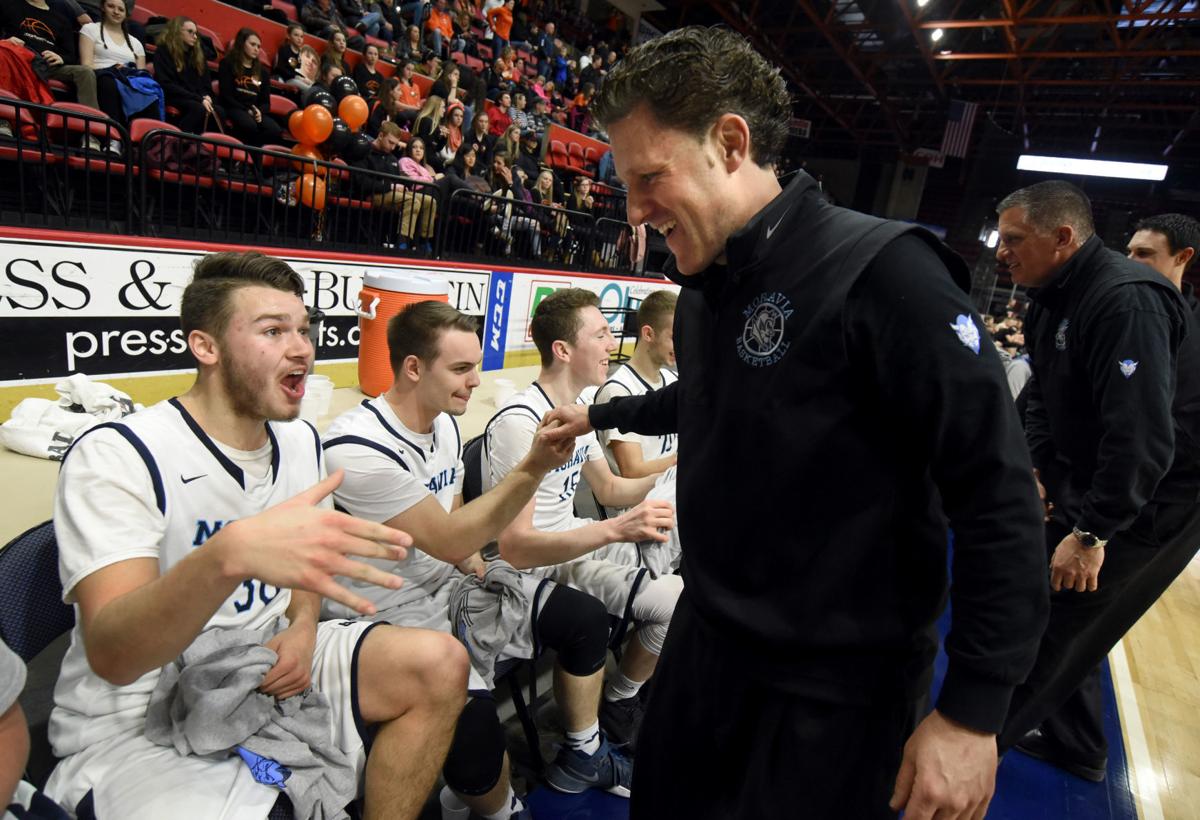 Moravia head coach Todd Mulvaney and his staff congratulate Parker Dickenson, left, and the other players after defeating Cooperstown in the NYSPHSAA Class C regional in Binghamton in 2017.

Whether it be the desire to save lives or the adrenaline rush, something about fighting fires has always been attractive to Parker Dickenson.

His family has a history in this line of business. Dickenson's father, Timothy, used to be the deputy chief of the Locke Fire Department. He also had a grandfather serve in the fire department, as well as an uncle.

Even when he was helping Moravia High School win its first state title in boys basketball in 2017, Dickenson had firefighting on his mind.

These days, he spends his time as a member of the Moravia Fire Department, a position he'd been working toward since he was 14 years old.

"I grew up around it," Dickenson said in an August interview with The Citizen. "Ever since I was a kid I was always around it and I always enjoyed it. When I had the chance to join the Locke Fire Department at 14 years old to become a junior core member, I did that."

Most people in town likely know Dickenson from his role on Moravia's varsity basketball team. He helped the Blue Devils advance to two straight state tournaments his junior and senior years.

Dickenson remembers that 2016-17 season, his senior season, vividly. There was the early season loss to Marcellus in Moravia's own home tournament; in the middle of the year, the Blue Devils lost a tight one against rival Groton; and on the eve of the postseason, Moravia dropped back-to-back games against Trumansburg and Chittenango.

But nothing compared to the accident that shook the Moravia community on Dec. 27, 2016, when one of Dickenson's teammates, Dustin Mondics, was critically injured in a vehicular collision with a tractor trailer.

Dickenson wasn't a member of the Moravia Fire Department at the time, but those firefighters were among the first responders that helped retrieve Mondics from his crushed car.

It was further motivation for Dickenson. He wanted to help save lives. While some, like Mondics, make a full recovery, others aren't so lucky.

"It's a good feeling when you go do that kind of stuff, especially when it's someone young like he was," Dickenson said. "I've talked to Dustin about it, about how he was lucky and how he had a great group of firemen help him get out of that car.

"I told him about how I had a wreck in Locke once for a young kid that was like 22, and he didn't make it. That one messed me up for awhile. Just knowing that sometimes you're going to save people and sometimes you're not."

The Blue Devils had a game against Homer later that week after Mondics' accident, a game they narrowly won. Mondics wasn't present for that one, but he was courtside later that season as Moravia strung together win after win, ultimately capturing the state championship.

That June, Dickenson graduated from Moravia and moved on to Onondaga Community College to pursue a degree in Fire Protection Technology. He took general courses, like English, and more degree-focused classes, like a chemistry class for hazardous materials.

While at school, Dickenson joined the Onondaga Hill Fire Department. It was there that he entered his first house fire, a blaze in Fairmount. He was part of the crew tasked with searching the second floor of the home, where he helped knock down some pockets of fire.

Dickenson admits the first time doing something, like stepping into a house fire or performing CPR, can be nerve-wracking, but now with more experience under his belt, he's comfortable with all his responsibilities.

"Every time there's a reported fire, I get a massive adrenaline rush," he said. "I know some people say, 'How can you guys do it?' They'll be running out while our guys are running in. Some people don't like to see that, but I just love the adrenaline it gives me."

He admits that all the pressure-packed games from his basketball career help, though clarifies that sports are not on the same level as firefighting. A starting forward during his career, Dickenson was on the court when Moravia rallied from a 23-2 first quarter deficit to defeat Cooperstown in the 2017 state regional. In the state semifinal win against Stony Brook, Dickenson scored eight points in the fourth quarter and grabbed the game-clinching rebound. He was steady again in the state championship, scoring seven points with seven rebounds and five assists, helping Moravia beat Lake George for the title.

Because of extensive work hours, Dickenson doesn't hoop as much as he'd like. He occasionally participates in Moravia's "old man league," where ex-Blue Devils meet Wednesdays and Sundays to play. Some of his old teammates, like Mondics, Jordan Crossgrove, Carter Flick and Zach Becker, are among the participants.

"I do miss basketball a lot," Dickenson said, "and I want to get back into it."

It's hard not to be reminded of his accomplishments on the court. At home, Dickenson's mud room features a shrine of mementos, like his state championship medal, sectional title medals, a team photo, and tickets from the games.

He often thinks of the support from the Moravia community, a major reason why he decided to stick around and join the fire department. Dickenson recalls after Mondics' accident when the community held a candlelight vigil outside Moravia High School. There was also monetary donations so that the team could buy new jerseys or fundraise for other things. In 2016 when the Blue Devils had a state regional game in Whitesboro, the community raised money so that the team could stay in a hotel the night before.

When it comes to saving lives and giving back to his hometown, Dickenson sees it as a no-brainer.

"The community was there for us. They were behind our whole team and Moravia has always been a basketball town," Dickenson said. "I do feel that I should pay back and help in some way. I've always liked volunteering and I love firefighting, so that's the thing I do for my town."

Jake Morin is Auburn's all-time leading goal scorer in boys lacrosse. This Sunday, he faces Syracuse as a member of the Army men's lacrosse team.

Auburn doomed by Starling's 38 points in sectional loss to Baldwinsville

It's only February, but Auburn native Tim Locastro is already terrorizing opposing teams on the base paths.

Section IV revealed its boys and girls basketball brackets on Thursday, and five Cayuga County teams will continue their seasons in their resp…

Weedsport boys basketball is moving on in the Section III Class C tournament after defeating Westmoreland on Saturday.

Results and schedule from the second weekend of the Byrn's Jr. Masters tournament

The second weekend of the Byrn's Jr. Masters bowling tournament is in the books.

Port Byron girls basketball was keyed by a 14-point run in the third quarter in its sectional win over Pulaski Friday night.

Moravia's Parker Dickenson shoots a floater against Stony Brook during the NYSPHSAA Class C semifinal game in Binghamton in 2017.

Moravia head coach Todd Mulvaney and his staff congratulate Parker Dickenson, left, and the other players after defeating Cooperstown in the NYSPHSAA Class C regional in Binghamton in 2017.