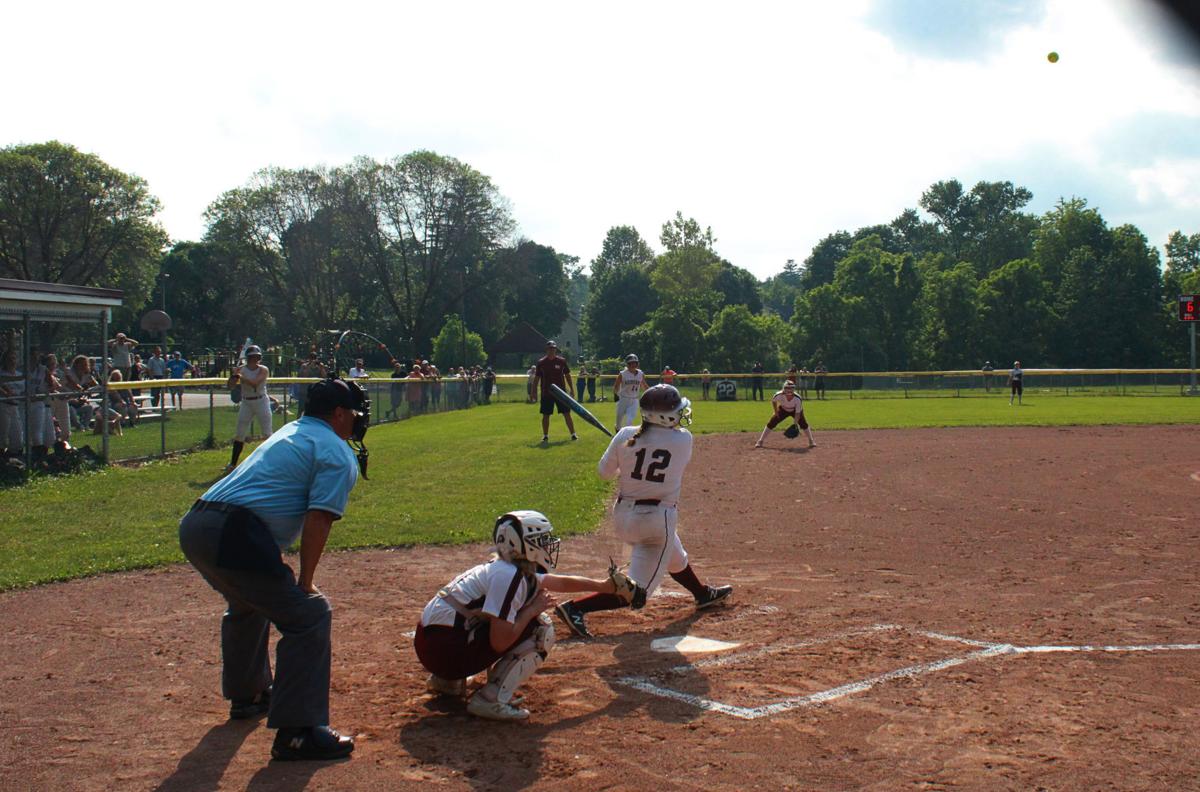 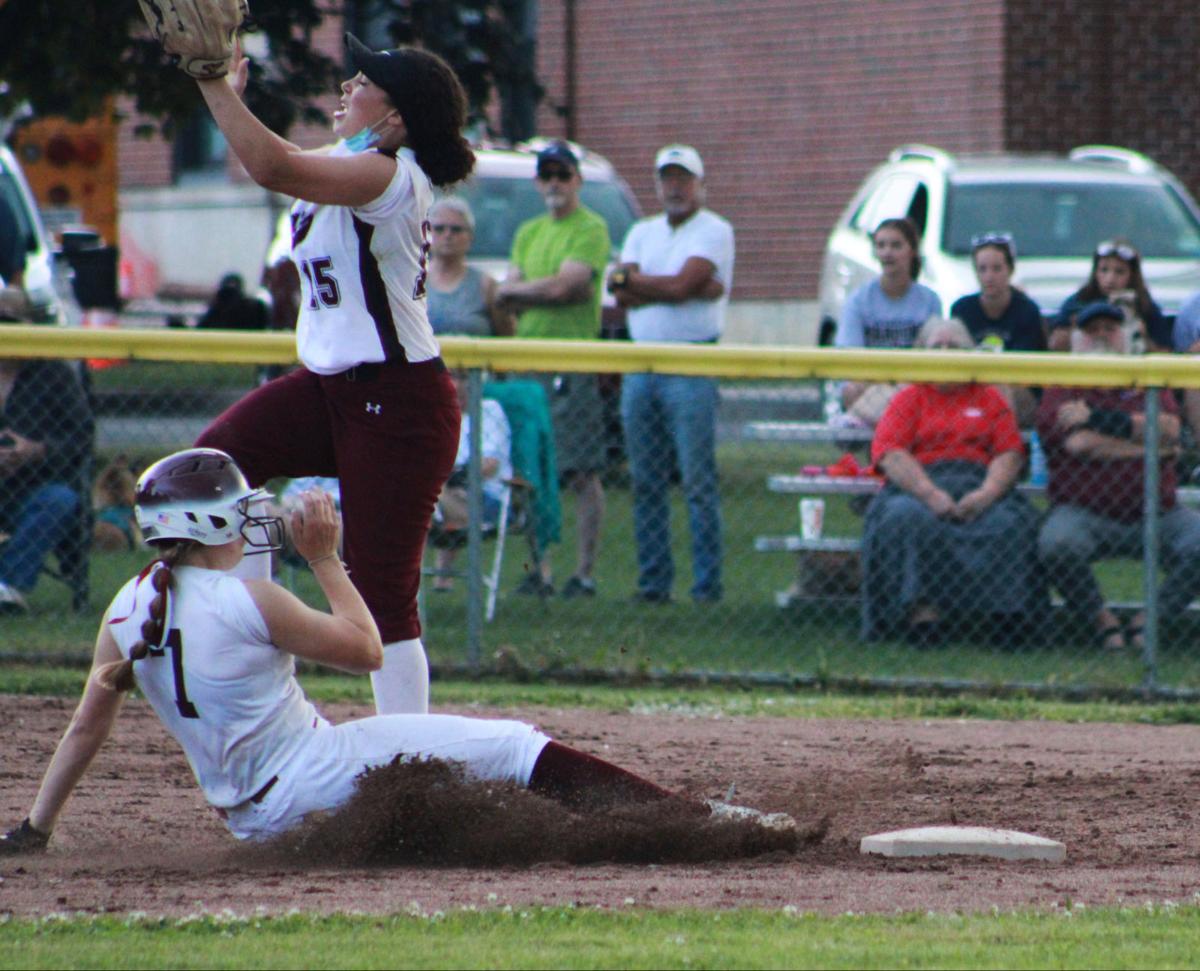 Auburn's Doray DiLallo slides below a tag at second base against Central Square on Tuesday. The game went into a rain delay in the eighth inning and was later postponed to Wednesday.

AUBURN — Participants called it one of the strangest softball games they've ever been involved in.

For the home team Auburn, thanks to a walk-off home run by Morgan Cook, the marathon game had a thrilling end. Cook's home run was the dagger in an 8-6 win over Central Square in a Class A sectional quarterfinal that was completed Wednesday at Herman Avenue Elementary.

Beginning Tuesday evening, the game was forced into a delay when thunderstorms struck Auburn around 7:30 p.m., with the score tied 6-6 in extra innings. The pounding of rain made the field unplayable, forcing teams to retreat home for the night and resume play on Wednesday.

"Getting stuck in a tie ballgame and having to come back the next day, it was definitely special. I don't know how else to put it," Auburn coach Kelley Horbal said. "It's so weird. It was like, 'Let's play ball!' and then ballgame over."

The game, and Auburn's season, easily could've ended Tuesday. After the Maroons went ahead 3-0 in the first inning behind home runs from Doray DiLallo and Elise Clifford, Central Square made a pitching change that drastically changed the RedHawks' fortunes. Central Square scored once in the second inning and five more times in the third to take a 6-3 lead, and turned what looked like a laugher into a nail-biter.

DiLallo, who hit for the cycle, then took the game into her own hands. In the bottom of the third, DiLallo singled, stole second, stole third, and then came home on a passed ball for Auburn's fourth run. Her RBI triple in the fifth inning brought the Maroons within a score. Then in the seventh, with the Maroons in jeopardy of coughing up a home sectional game to a team they beat twice during the regular season, DiLallo made a judgement call.

Her double (which completed the cycle) landed DiLallo at second base with none out. Two at-bats later, Emma Bellnier hit a ground ball to the left side that allowed DiLallo to advance. As the RedHawks shortstop tried to take the out at first, instead of stopping at third, DiLallo ran through assistant coach Mike Lowe's sign and made for home plate.

A do-or-die decision, and in this case, DiLallo did. Her slide eluded a tag attempt by Central Square catcher Jailynn Patchen to tie the score 6-6 in the seventh.

"(Coach Lowe) always tells me to make my own judgement, and if I think I can make it to go," DiLallo said. "Some of that baserunning was very risky. It was just the adrenaline and everything going on. It was just so crazy."

Said Horbal, "I'm very, very comfortable with her making those decisions. She's a very well-rounded and educated athlete. She's not just a catcher, not just a good hitter. She knows the game inside and out, and she's comfortable saying, 'Whatever you need from me, I'm there.' You don't get that often from many players. She's here to play hard and win, and because she's proven that the last four years, we feel comfortable that when she sees something she'll take advantage. She's earned that."

Another play at the plate, this time involving Bellnier, didn't go the Maroons way which sent the game to an extra eighth inning. Then, with two outs and a runner on second for Central Square, Mother Nature unleashed a heavy dose of rain. The teams would have to return the following day, Wednesday, to decide a winner.

When the game resumed on Wednesday, pitcher Madison Lowe needed only two pitches to end the RedHawks' threat. To start the bottom of the eighth, Sydney Marinelli worked a walk, then advanced to third on a pair of passed balls.

Cook, Auburn's mighty slugger from the No. 2 hole, only needed to lift the ball to the outfield to win the game. Instead, she lifted it over the fence.

"I had a 3-1 count, so I knew their pitcher was probably gonna give me something in the zone," Cook said. "I was looking high and away, but she missed her spot."

While the win might be the Maroons' weirdest of the season, they hope it's not their last. Auburn will travel to Chittenango Thursday for the Section III semifinal, to face a team the Maroons have no familiarity with other than the scouting report.

"We've got a little bit of information on the type of team they have, so we're just trying to be mentally prepared and focused for the caliber of play we're gonna see," Horbal said. "It's gonna be a good game."

Look to the Chargers and Seahawks to make the playoffs

The Citizen compiled a slideshow featuring stories from a wild week of sectionals. After there was no spring sports season due to COVID-19 in …

Auburn's Doray DiLallo slides below a tag at second base against Central Square on Tuesday. The game went into a rain delay in the eighth inning and was later postponed to Wednesday.