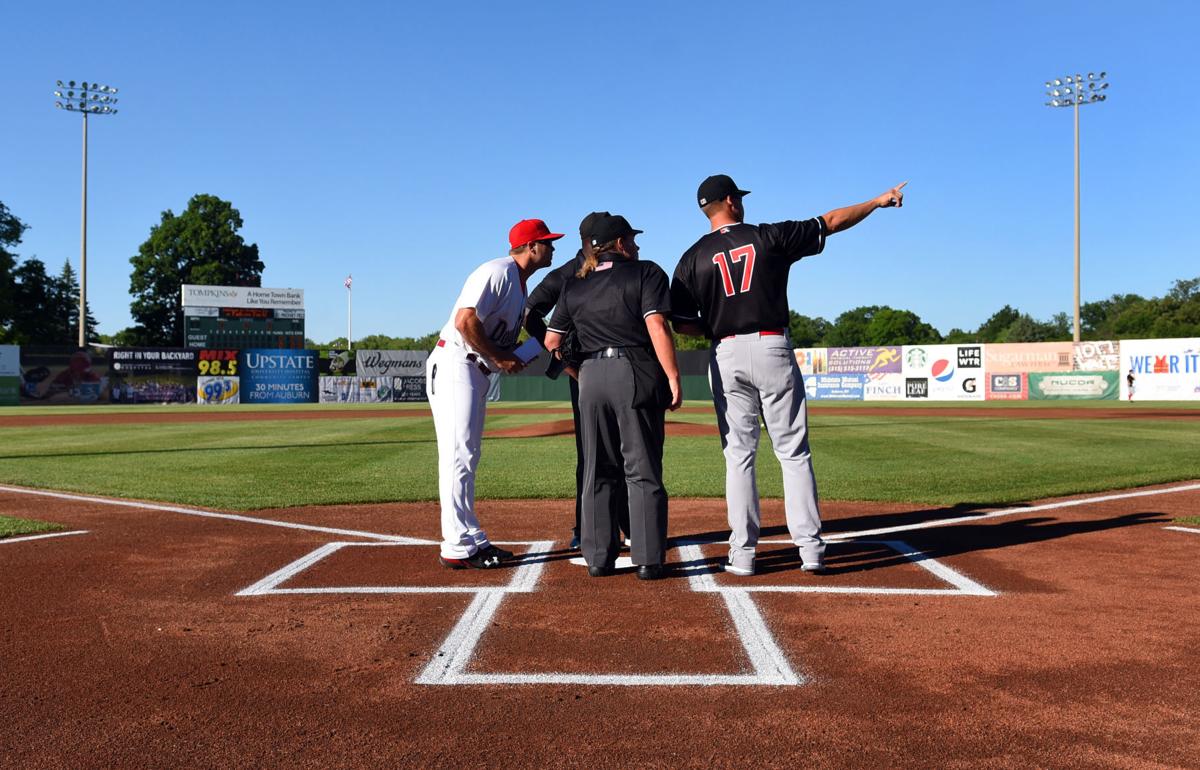 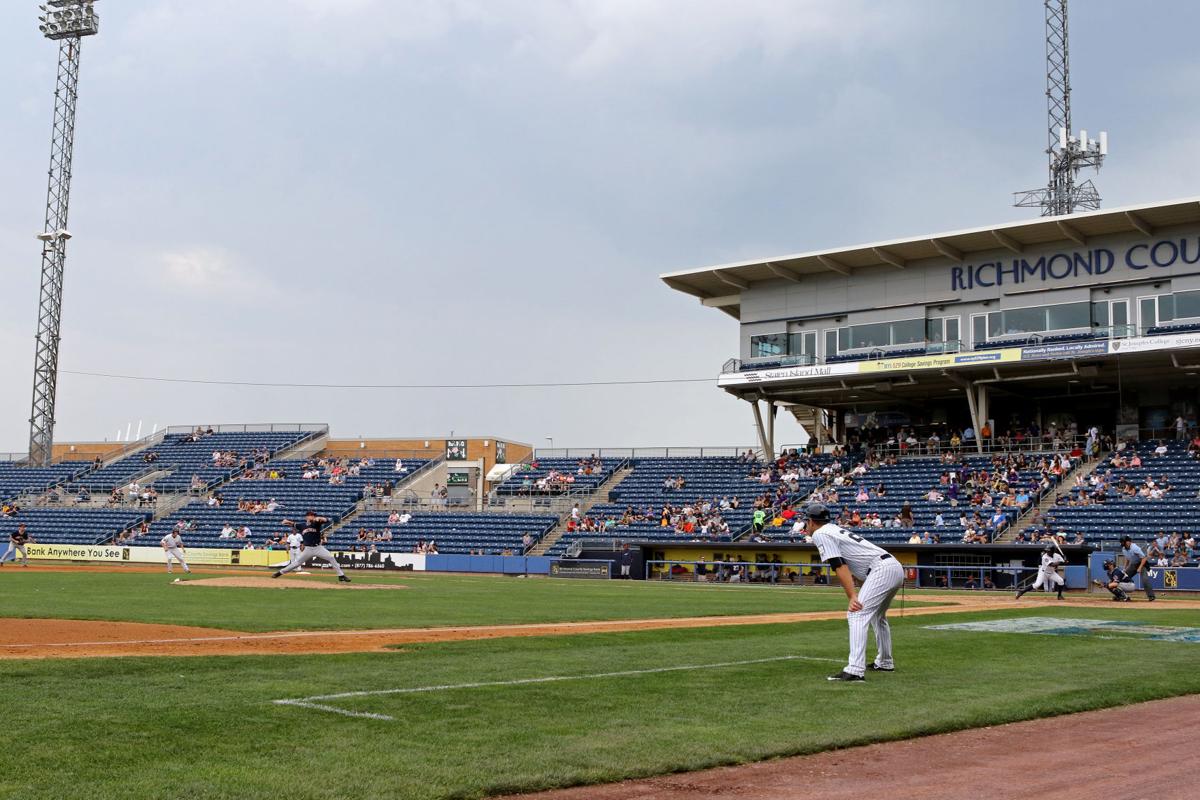 Richmond County Bank Stadium in Staten Island is shown during a game between the Staten Island Yankees and Connecticut Tigers in 2015.

While its presence in Minor League Baseball isn't as strong as states like California, Florida or Texas, New York has its own rich history grooming prospects for the major leagues.

Some of the state's larger cities, like Buffalo and Rochester, have been home to minor league baseball for decades. Smaller cities like Jamestown or Olean — which no longer have teams — were once hubs for baseball clubs at lower levels.

Auburn, which once fancied itself a baseball town, has been home to some form of professional baseball since the late 1800s.

Auburn, along with seven other teams that last played in the New York-Penn League, is currently without a league and major league affiliate. Auburn's partnership with the Washington Nationals, in place since 2011, ended after the 2020 season that was not played due to COVID-19.

Presented with an opportunity to participate in the newly minted MLB Draft League, a summer wood bat league for college prospects, Auburn passed. Conversations with other baseball organizations for use of Falcon Park, including those at the collegiate level, are ongoing.

When the minor leagues last played in 2019, New York state had 10 clubs with major league affiliates at various classifications ranging from the doorstep of the major leagues (Triple-A) to rookie ball (Short-Season A).

For some, it'll be relative status quo whenever MLB and MiLB agree on a new Professional Baseball Agreement and minor league baseball returns. For most, however, the future carries drastic changes.

Two New York Mets affiliates that reside in New York state have largely been uninterrupted by MiLB's changing landscape. At the introductory press conference for new Mets owner Steve Cohen, president of baseball operations Sandy Alderson announced that the Mets' Triple-A affiliate in Syracuse and Double-A affiliate in Binghamton would remain as such.

However, the Mets' third interstate partner, the Brooklyn Cyclones, will have a new home in 2021. When minor league baseball returns, Brooklyn will join the new Mid-Atlantic League, which is a planned full-season High Single-A league.

Brooklyn has been a member of the New York-Penn League since 2001 and won the circuit's most recent championship in 2019.

Another of New York's other Triple-A teams, the Rochester Red Wings have a new affiliate. A farm club of the Minnesota Twins since 2003, Rochester will partner with the Washington Nationals starting in 2021. Sen. Chuck Schumer announced the affiliation on his Twitter account Nov. 19, which the Red Wings later confirmed.

The Nationals were partnered with Syracuse from 2008-2018, and then were affiliated with Fresno in the Pacific Coast League in 2019. By joining with Washington, it will mark the first time since 1960 that Rochester is affiliated with a National League club.

The Buffalo Bisons, another Triple-A club, is expected to remain an affiliate of the Toronto Blue Jays according to The Buffalo News. Buffalo's Sahlen Field served as the Blue Jays' host during the shortened 2020 MLB season, as the organization could not gain clearance from Canadian health officials to host games in Toronto.

Joining the Brooklyn Cyclones in the Mid-Atlantic League will be another former New York-Penn League team, the Hudson Valley Renegades. Hudson Valley, an affiliate of the Tampa Bay Rays since 1996, is partnering with the New York Yankees.

In announcing their new farm system structure on Nov. 7, the Yankees also revealed that their 22-year partnership with the Staten Island Yankees was over. Staten Island was previously the Yankees' short-season affiliate in the New York-Penn League, but is now left without a major league parent.

Staten Island released a statement shortly after the Yankees' announcement.

“The Staten Island Yankees made every effort to accommodate MLB and New York Yankees requirements, including securing a commitment from New York City for ballpark upgrades. However, MLB and the Yankees chose not to engage in any discussions with us. We were unaware of the final decision and learned about it by reading the statement on Yankees social media.

“(Our partnership) was planned and agreed-to in 1999 for the express purpose of hosting New York Yankees professional Minor League Baseball. We are shocked at the developments from this past weekend, and we believe what has happened to our organization is unacceptable," the statement read.

Auburn, Staten Island, Batavia and Tri-City — all New York-Penn League teams — are the state's four remaining minor league teams without a path forward. All were offered a position in the MLB Draft League.

For Auburn, the decision to pass was a financially-based one. Auburn city manager Jeff Dygert told The Citizen Monday that the Draft League's franchise fee was a main reason for passing on the opportunity.

Tri-City balked at the offer in hopes of remaining a professional club — the Draft League is for amateur players — even if such status doesn't include a major league affiliate, ValleyCats president Rick Murphy told the Albany Times Union.

Meanwhile, Batavia has been quiet on all fronts regarding the future of the Muckdogs. The team's website has not issued any updates on the organization since June when the start of the New York-Penn League season was delayed. The Muckdogs' Twitter account has not made a post since February.

Batavia was most recently the short-season affiliate of the Miami Marlins. However, with most major league franchises seeking farm clubs within their own region, the Marlins could choose to cut ties with the Muckdogs. Miami has not yet announced its 2021 affiliates.

After two innings of play, the Auburn Doubledays' home opener against the State College Spikes was suspended due to rain.

MLB announced Monday the new Draft League, which will feature several former New York-Penn League teams. The Auburn Doubledays, however, are not included.

Sciria: Auburn Doubledays merchandise sale beginning of the end of our team

It was like an estate sale except the person wasn't legally dead yet. There was an Auburn Doubledays merchandise sale Friday at downtown Aubur…

The New York-Penn League could be transitioning to a wood bat league for collegiate players, but it remains to be seen if Auburn would take pa…

Due to unknown circumstances surrounding the future of Minor League Baseball and the New York-Penn League, the Auburn Doubledays will not reta…

Richmond County Bank Stadium in Staten Island is shown during a game between the Staten Island Yankees and Connecticut Tigers in 2015.