NHL on verge of labor stability; Sabres in good shape
Share this
Return to homepage × 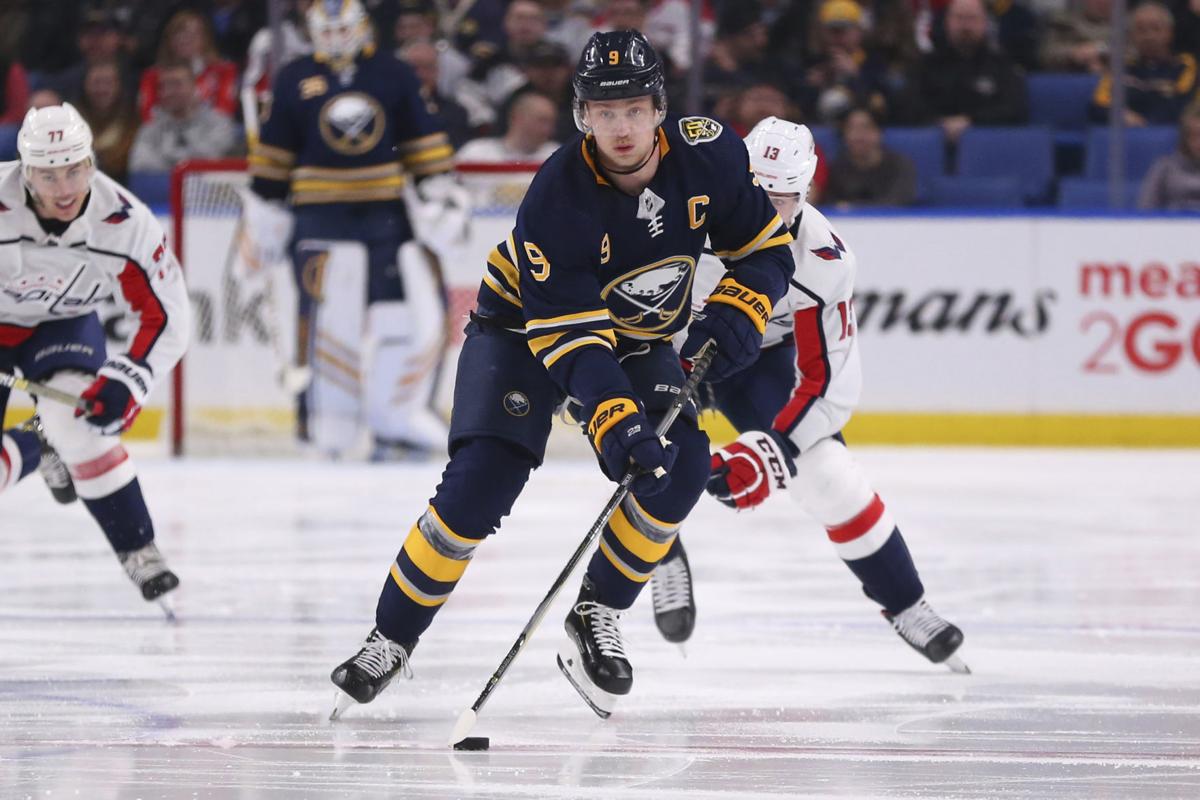 Sabres forward Jack Eichel carries the puck against the Capitals March 9 in Buffalo. 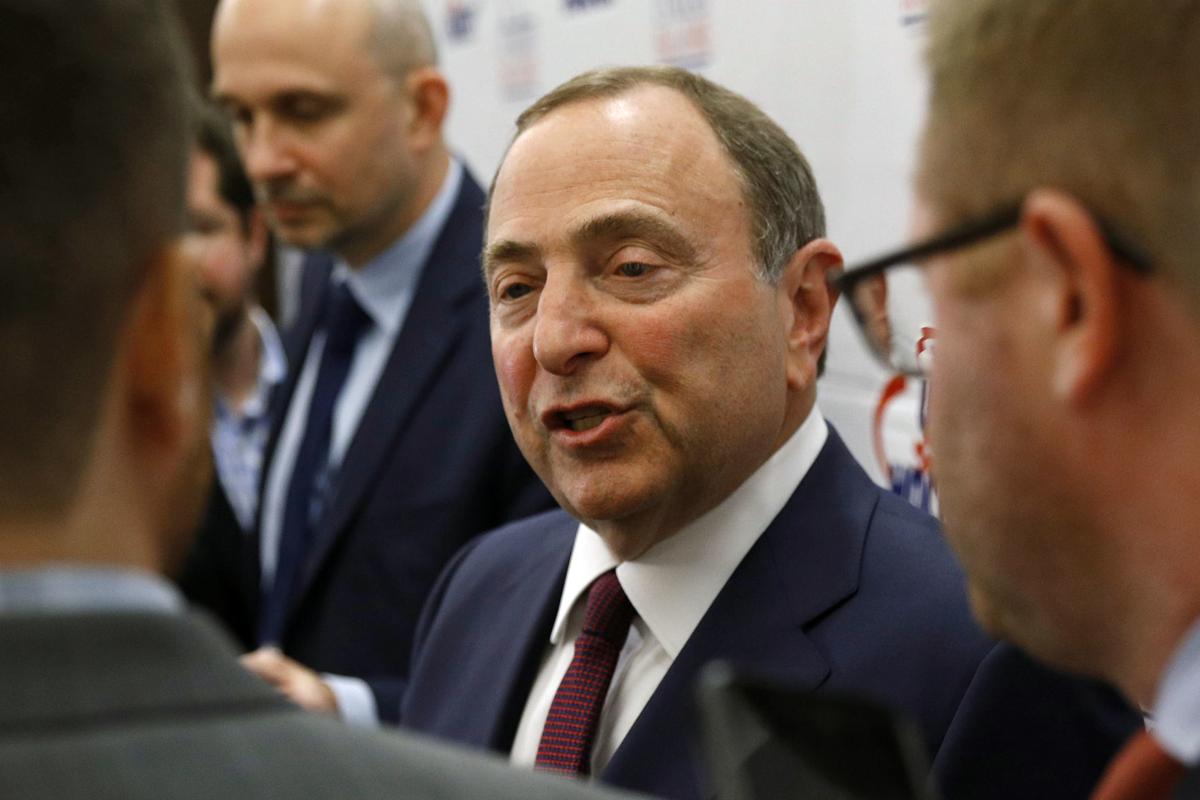 As players across the globe prepare for a possible resumption of play this summer, the National Hockey League and NHLPA are reportedly closing in on an agreement that would ensure labor stability through the 2025-26 season.

Sportsnet and TSN reported Wednesday that the NHL and NHLPA established a framework for a four-year extension to the current collective bargaining agreement that would have owners and players share the economic hit sustained since the coronavirus pandemic resulted in the suspension of play March 12.

The reported agreement includes a flat salary cap of $81.5 million the next two seasons and will increase to $82.5 million in 2022-23. Following those three seasons, the salary cap would again be linked to revenue. The players are expected to vote on the agreement this week.

This would provide new Buffalo Sabres General Manager Kevyn Adams with some clarity during his first offseason on the job. According to CapFriendly.com, Adams would have approximately $34.4 million in salary-cap space for 2020-21, although an overage created by performance bonuses will cut into that total.

The agreement also reportedly includes the NHL allowing its players to participate in the Winter Olympics in 2022 and 2026, pending an agreement with the International Olympic Committee. The league has not participated in the event since 2014. The Sabres can count on Jack Eichel and Rasmus Dahlin being chosen for the United States and Sweden rosters, respectively, if the NHL and IOC complete a deal.

The players tentatively agreed to financial concessions. A 20% cap on escrow would be instituted next season with that number decreasing in future seasons. Players would also defer 10% of their salaries in 2020-21, which would protect them from the higher escrow and provide owners with additional cash flow in the event fans are unable to attend games. The players would receive that money on a later date.

The NHL would then revert to its current escrow system after three years. Under the current system, the players and league have a 50-50 split of all hockey-related revenue, and there are times the combined salaries of all players exceeds their share.

In anticipation of such a situation, the NHL withholds a percentage of a player’s salary and places that money in escrow. The money is pooled and the league takes that money if its share of the revenue is less than 50%. Anything left is returned to the players. The system works in reverse order, too.

Edmonton and Toronto were reportedly chosen as hub cities for the return-to-play format, and the NHL and NHLPA established an out-clause for any player who does not want to participate.

While the Sabres aren't impacted by the 24-team return-to-play format and the transition to phase four, clarity with the salary cap is an important first step in Adams’ plan to build a winner in Buffalo. Theoretically, Adams could begin to have substantive contract talks with his pending unrestricted and restricted free agents. He and his staff can also begin to plot potential offseason acquisitions, although free agency won’t begin until the fall and currently trades can only be made between the seven non-playoff teams.

The flat salary cap could create a chaotic offseason because some teams will need to unload salary. Although the Sabres likely won’t be able to take advantage of such a scenario, this could help them sign winger Sam Reinhart, a pending restricted free agent.

Previously, Reinhart might have wanted to wait until next summer to sign an extension because it would be possible for the cap to rise once the NHL recouped lost revenue. Since the cap won’t change over the next two seasons, Reinhart would take a risk by not signing with Buffalo in 2020.

This could also encourage Adams to move salary off the roster. Defenseman Brandon Montour is a pending restricted free agent and will likely receive a raise from the $3.52 million he made this season. Other possible trade chips include Rasmus Ristolainen, Colin Miller and Carter Hutton.

It's been a slow start to the season for the Arizona Diamondbacks, but Auburn native Tim Locastro played a key role in the club's first win in 2020.

Tim Locastro made his first start of the season in the Arizona Diamondbacks' 11-2 loss to the Los Angeles Dodgers Saturday night.

When Arizona Diamondbacks outfielder Tim Locastro saw that Eduardo Escobar's hit was headed toward the gap in right-center field, he sprinted …

For family members and friends of Auburn native Tim Locastro, they won't forget where they were in the afternoon of July 31, 2019.

Due to travel restrictions and New York's current guidance on spectators at racing facilities, Weedsport Speedway has canceled the ESS Legends…

Sabres forward Jack Eichel carries the puck against the Capitals March 9 in Buffalo.