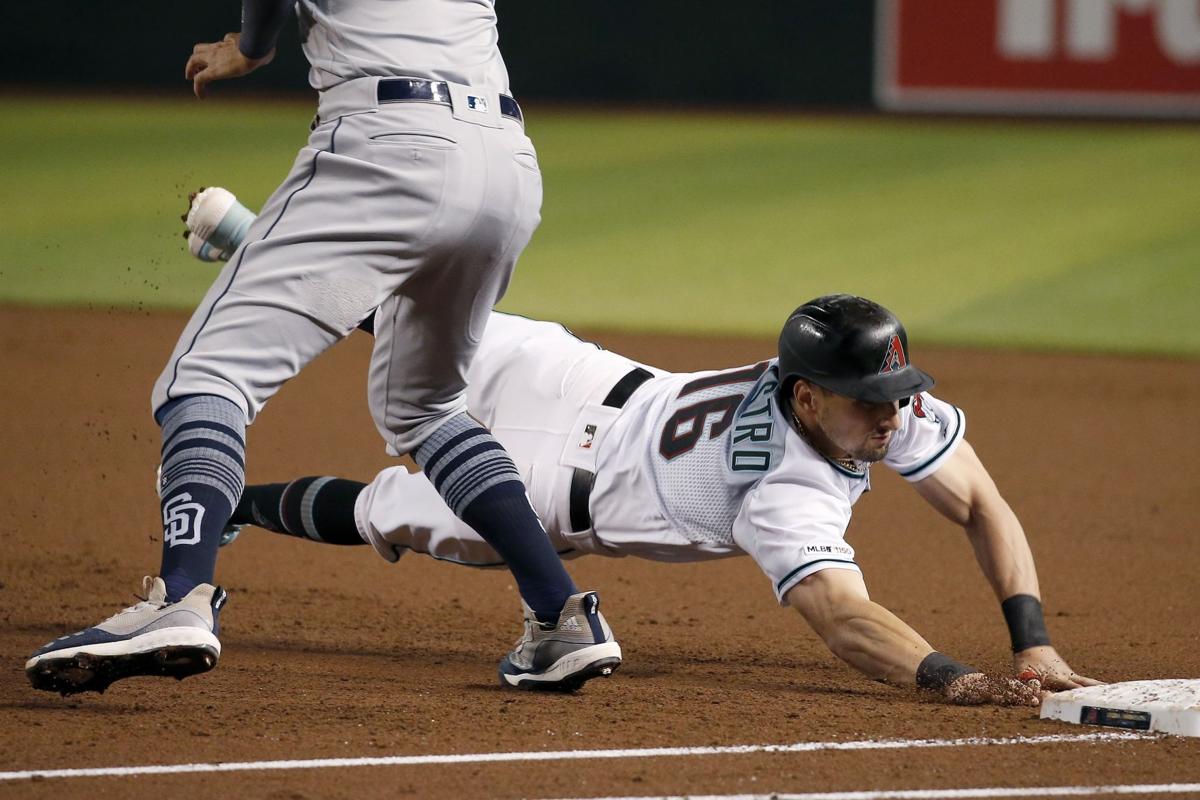 The Diamondbacks' Tim Locastro dives safely back to first base during a pickoff attempt by the San Diego Padres Sept. 27, 2019 in Phoenix. 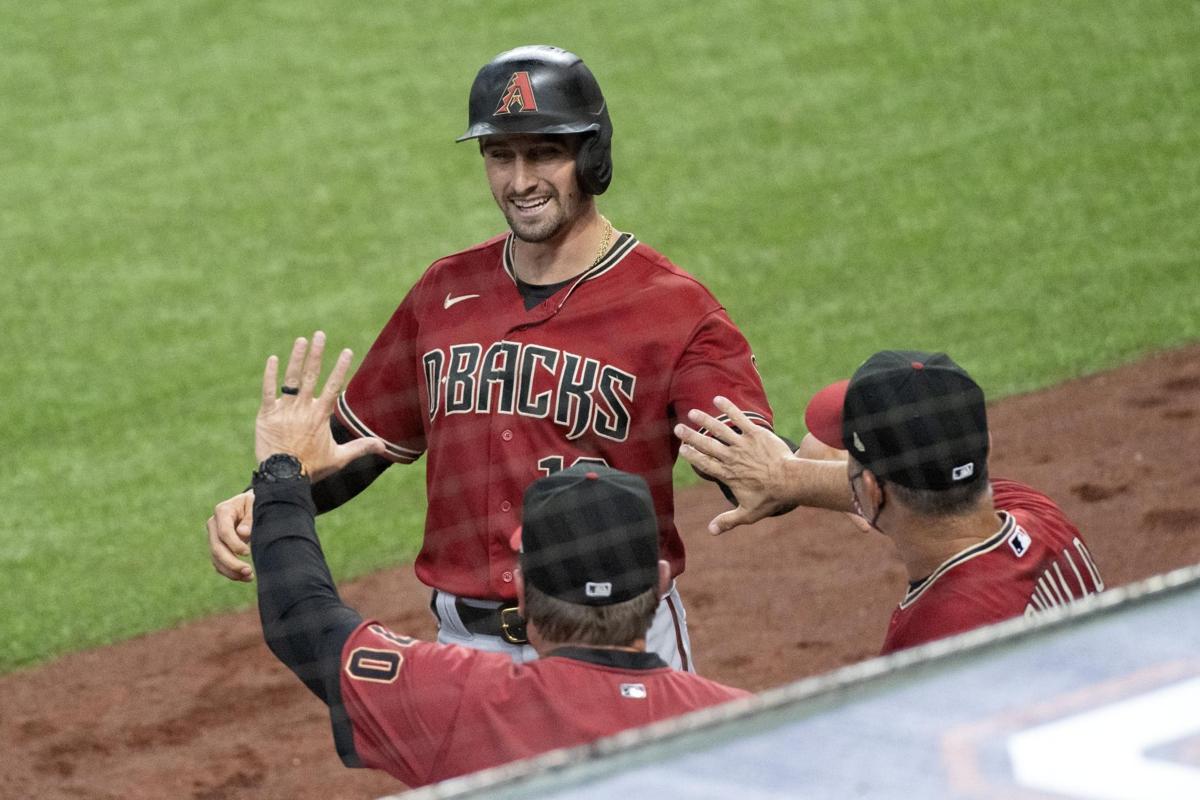 Arizona Diamondbacks' Tim Locastro is congratulated by pitching coach Matt Herges, left, and manager Torey Lovullo after scoring on a triple by Eduardo Escobar during the eighth inning of a baseball game against the Texas Rangers Wednesday, July 29, 2020, in Arlington, Texas.

The shortened 2020 season was a disappointing one for Auburn native Tim Locastro and his Arizona Diamondbacks teammates. But he believes the club can bounce back and have a better 2021 season.

The Diamondbacks' catchers and pitchers report for spring training this week. The first full squad workout is planned for Feb. 22.

During a phone interview with The Citizen last week, Locastro discussed his offseason work, a major personal development, the opportunity to start for the Diamondbacks and his goals for the upcoming 2021 campaign.

Here is an edited transcript of the interview with Locastro:

The Citizen: How was the offseason and what did you do to prepare for the 2021 season?

Locastro: The offseason went extremely well. I stayed with the same workout plan and continued to work out with the same trainer, Johnny Fiermonte. (Fiermonte was teammates with Locastro on the 2010 sectional champion Auburn baseball team.) I was back down in the Philadelphia area with my fiancee (Jenn Fox). She's going back to school at Villanova. Fortunately, I had a former college teammate down in that area that I was able to hit with and then I got out to Arizona in the middle of January. We've been outside, we've been hitting and we've been on the field. It's been great.

The Citizen: What's the outlook for the upcoming season? What are your goals?

Locastro: Definitely last year was unprecedented. Nobody has ever experienced that from being a rookie player to being a 10-year veteran player. Going into this year, knowing it's a full season, that's very exciting and playing 162 games. The goal, as a team, is to make the playoffs every single year and I don't think that's changed at all going into this year.

The Citizen: With the situation in the outfield, you're being talked about as a possible starting center fielder. Is the goal to win that starting job this year?

Locastro: I'm going into spring training trying to win a job. I've been trying to do that every year I've been to spring training, and this year is no different. I'm going to go out there, play 100% and hopefully the stars align and we get there. But again, making the opening day roster and — I've always said this — whatever I can do to help the team win every single game and make the playoffs, that's the number one goal no matter what. But obviously I'd love to start and win a job this year.

The Citizen: Last offseason, you talked about improving your power and you did hit some home runs in the 2020 regular season. (He smacked two homers in 69 at-bats last season.) Do you think you can build on that in 2021?

Locastro: I want to build off that, but we only played 60 games last year. So now it's to the point where consistency is going to be the number one thing. It's a marathon and not a sprint, so being able to do that across 162 games instead of just 60 games that's one of the main things.

The Citizen: With no universal designated hitter this year, does that give a player like you more opportunities? How does that change things for National League teams? (Note: For last season, there was a universal DH for both leagues. That rule won't be in place for the NL this season.)

Locastro: I think both having a DH and not having a DH, they both have their pros and cons. I think there's going to be a lot more games this year where there's going to be more double switches, more defensive switches and there's not really as much when there's a DH because pitchers tend to go longer. You gotta be prepared from the second, third innings and on in the NL games and just gotta stay ready no matter what. Things can change in an instant.

The Citizen: How do the Diamondbacks look this year after a disappointing 2020?

Locastro: Last year, we had high expectations. But our goals don't change. Everybody in that locker room has got that one main goal we talked about earlier: making the playoffs. We got a lot of great veterans. We got a lot of young players. Our chemistry is there. We got a lot of guys returning from last year, so that's exciting. There wasn't a lot of turnover. You build that camaraderie. That goes a long way in baseball. When a baseball team is constructed, most teams are built for 162 games, not 60. I think we just gotta put last year in the rear view mirror and go forward this year.

The Citizen: How do you feel about the Auburn Doubledays, a team you grew up watching, no longer being a minor league affiliate?

Locastro: It's rough. Like you said, growing up going to those games. It's one of the reasons I love baseball today. Just being able to go to games from the time I was born until all through college. They still have a team, but it just won't be the same. (Auburn is joining the Perfect Game Collegiate Baseball League, which Locastro played in while attending Ithaca College.) I feel bad, mostly for all the players that aren't going to get that opportunity. More players would be drafted if there were more teams. They're not going to get that opportunity to show themselves. I know the shoes that they're in where sometimes, you just need a chance.

The Citizen: You mentioned earlier you got engaged this offseason. How did you pull it off?

Locastro: I did it in a private ballroom in the Ritz-Carlton in downtown Philadelphia. We were going there for the weekend. We had it planned. I really didn't have a plan going into it, so I went up the concierge and he hooked me up with the ballroom and then my parents and her family were able to come down. We had dinner with them and she was totally surprised. She was happy as ever. It all worked out absolutely perfect.

School districts in Cayuga County will be allowed to host two spectators per student-athlete at sporting events moving forward.

Voices can often be synonymous with sports.

Auburn boys basketball rallied in the fourth quarter against Oswego on Monday, but ultimately fell in overtime 67-58.

The Diamondbacks' Tim Locastro dives safely back to first base during a pickoff attempt by the San Diego Padres Sept. 27, 2019 in Phoenix.

Arizona Diamondbacks' Tim Locastro is congratulated by pitching coach Matt Herges, left, and manager Torey Lovullo after scoring on a triple by Eduardo Escobar during the eighth inning of a baseball game against the Texas Rangers Wednesday, July 29, 2020, in Arlington, Texas.