Sindoni was informed by the school district in January that he would not be returning as varsity football coach due to his involvement in the informal game that took place Nov. 26 at the Skaneateles turf field. He has since filed a notice of complaint with the Onondaga County Supreme Court, arguing that he should be reinstated to his position as varsity football coach.

Sindoni had held his current position as football coach since 2015.

According to a court affidavit from Skaneateles Superintendent Eric Knuth, Sindoni was actively involved in the November football game, called the "Turkey Bowl," but did not inform district officials that the game was taking place. Knuth said the game was "unauthorized and unlawful use of school facilities."

Knuth added that the Onondaga County Health Department informed him that six participants of the game, including four current students, later tested positive for COVID-19.

"Based upon his egregiously poor judgment, I would feel that (Sindoni) was unfit for reappointment as a coach even if no cases of COVID-19 were reported following the Thanksgiving break. The fact that (Sindoni) was not appointed as the football coach at the time of the Turkey Bowl does not mean that he had no accountability for condoning reckless behavior by students who he coached," Knuth said in his affidavit.

The school district also claims to have security footage of the game that shows participants not using facial coverings while "playing a game that was prohibited at that time." Sindoni argued in his lawsuit that he did not organize the game, but attended to make sure participants followed safety protocols.

Tackle football is considered a high-risk sport, and was not permitted in New York state at the time of the game. Flag football is labeled moderate-risk, which did allow for competition. It is not specified in Sindoni's complaint or documents submitted by the school district which type of football occurred during the pickup game.

A court hearing on Sindoni's request for a preliminary injunction to immediately reinstate him as coach, pending the outcome of the lawsuit, is scheduled for Wednesday morning. 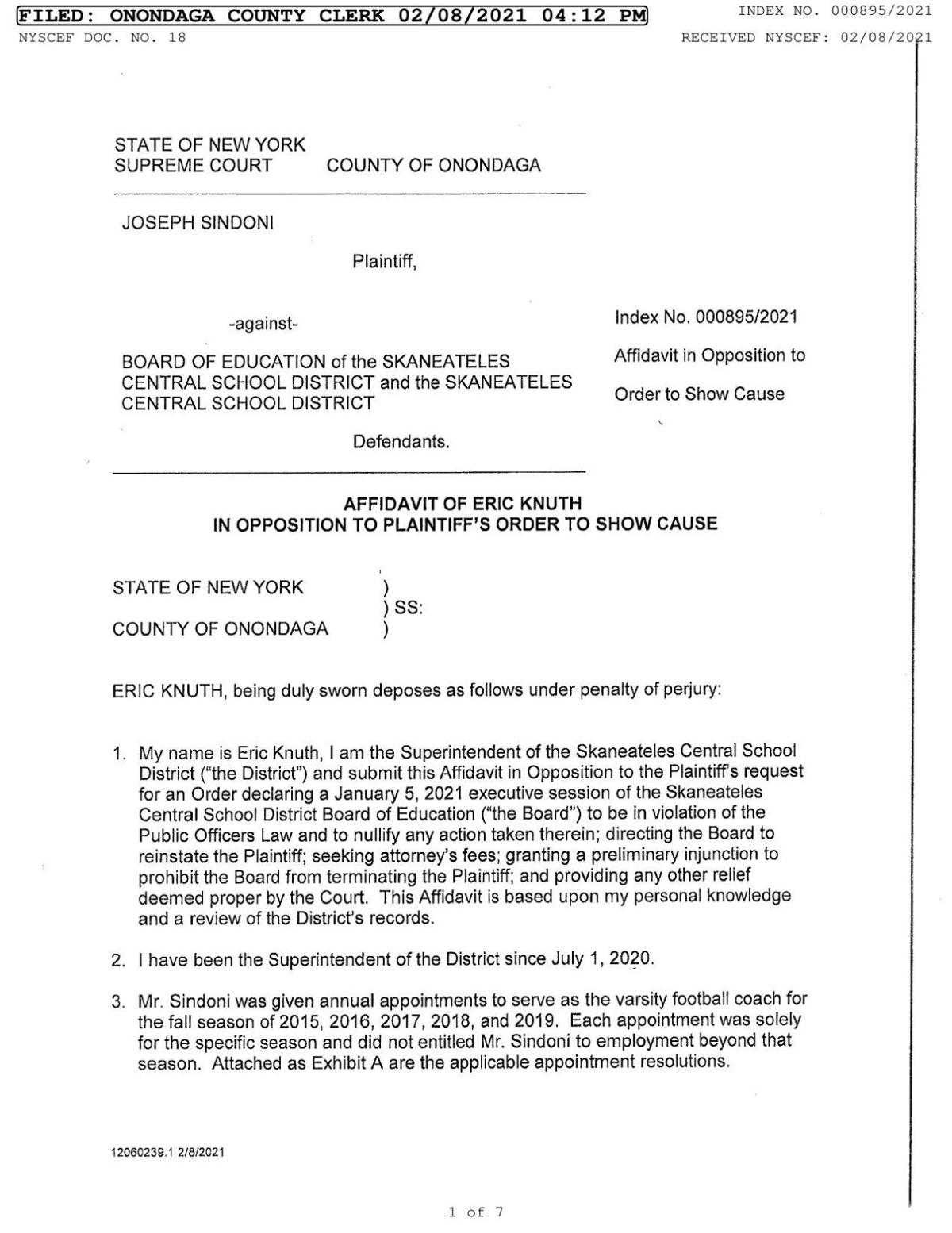 Decision expected next week regarding status of Skaneateles football coach

The immediate status of former Skaneateles varsity football coach Joe Sindoni will be determined next week, following a preliminary hearing in…

Judge orders Sindoni to be reinstated as Skaneateles football coach

The Skaneateles school district must reinstate its former varsity football coach pending the outcome of his wrongful termination lawsuit, a ju…