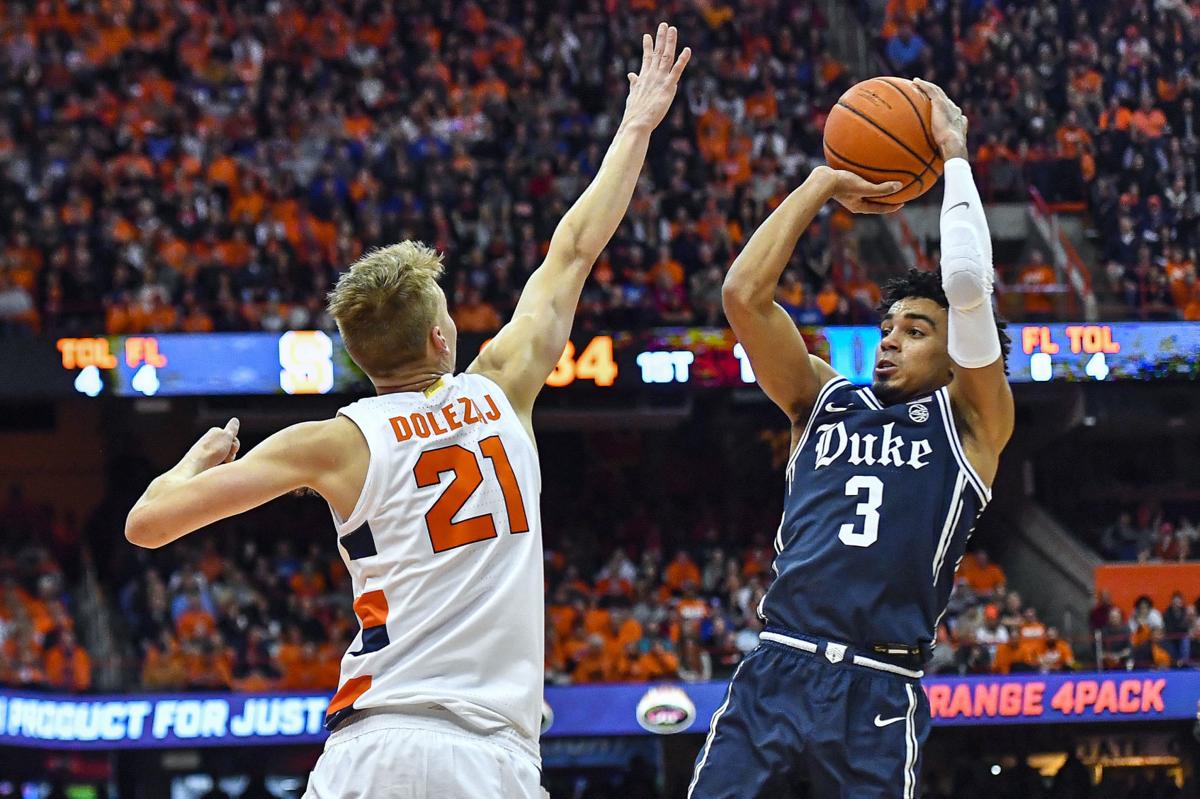 Duke guard Tre Jones is defended by Syracuse forward Marek Dolezaj during the first half Saturday in Syracuse. 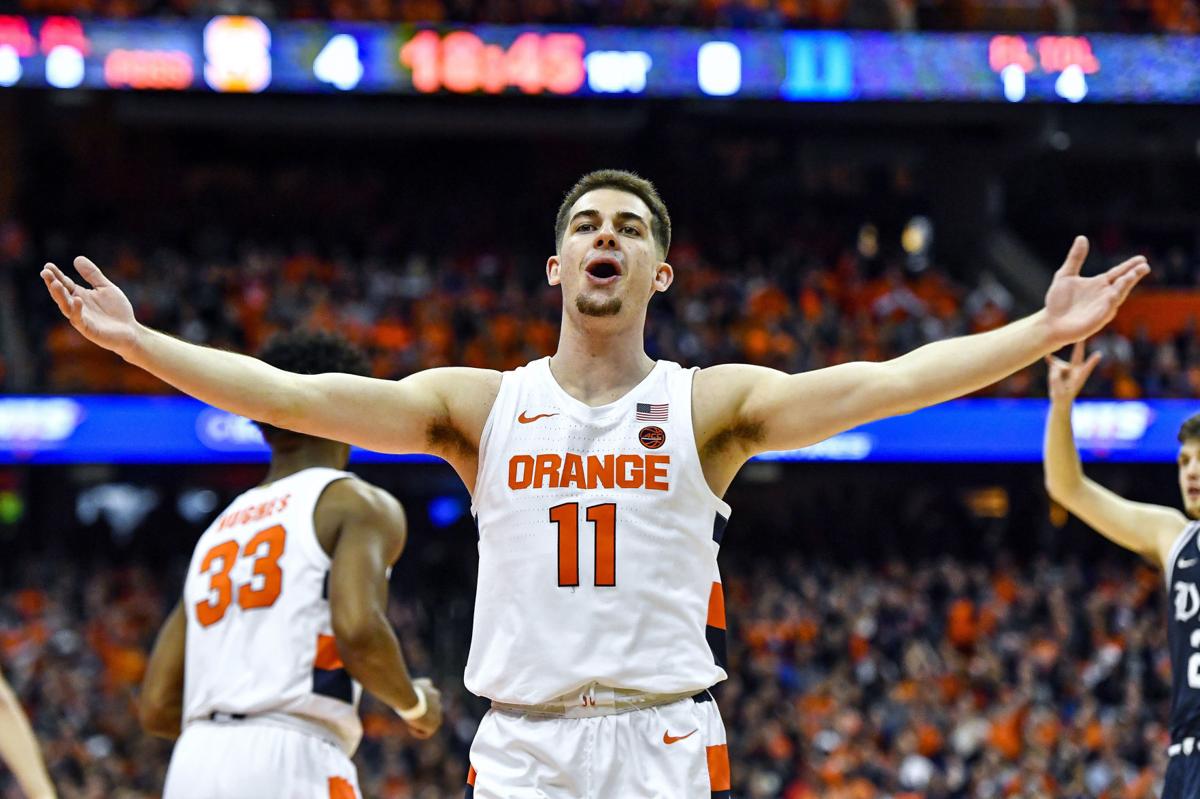 Syracuse guard Joseph Girard III reacts to the crowd during the first half. 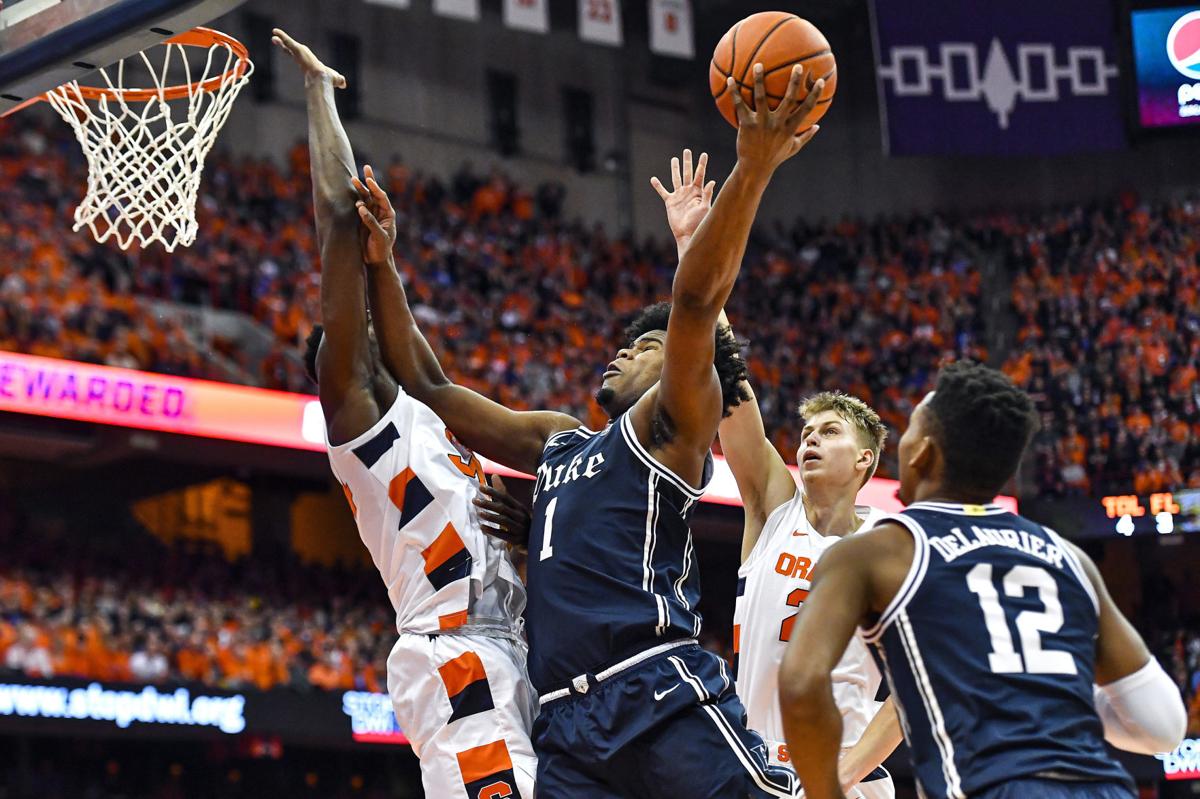 Duke center Vernon Carey Jr. drives to the basket against Syracuse forward Bourama Sidibe, left, during the first half in Syracuse Saturday. 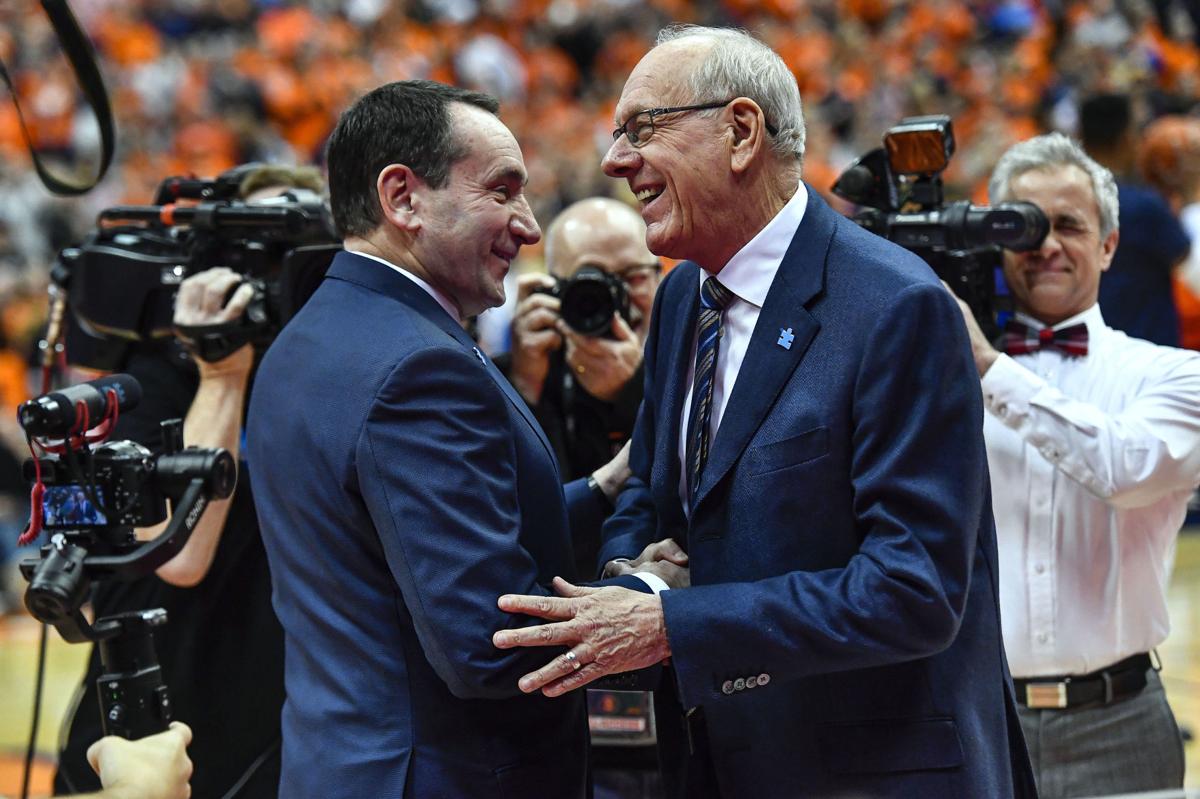 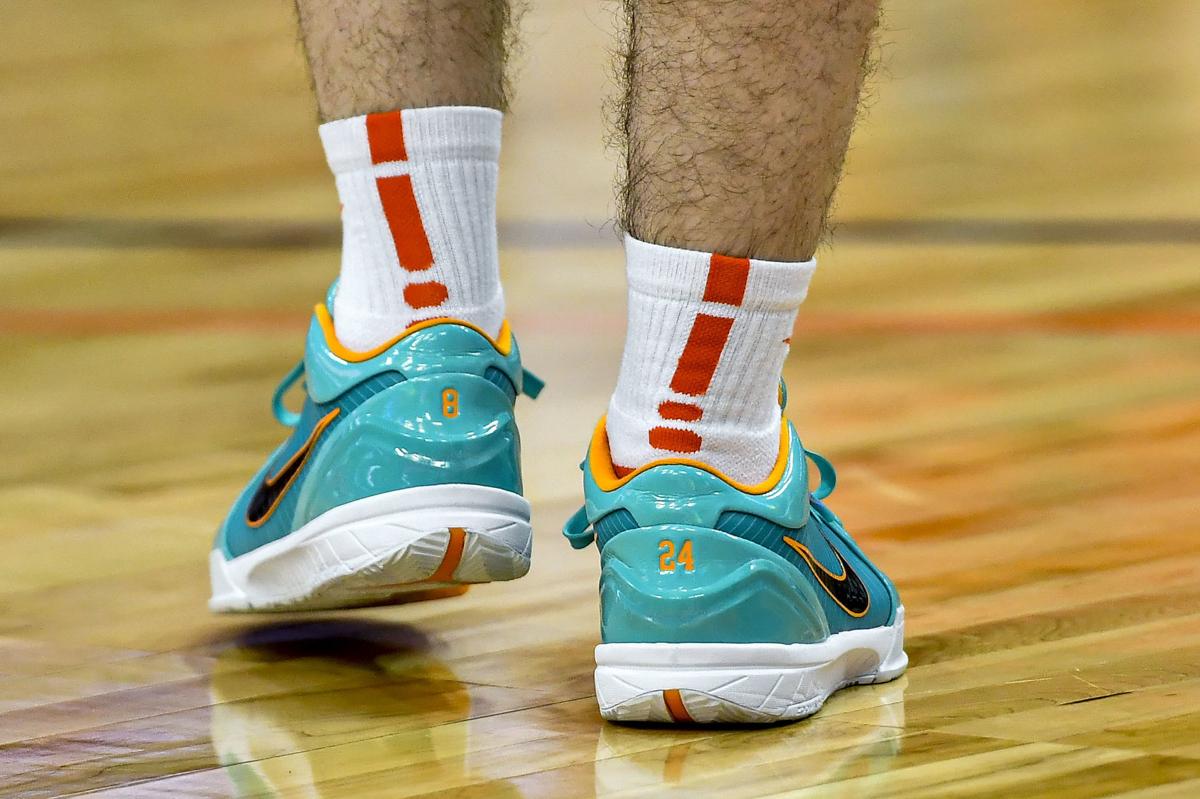 Syracuse guard Joseph Girard III wears sneakers in honor of the late Kobe Bryant before a game against Duke in Syracuse Saturday.

SYRACUSE — Vernon Carey Jr. stood tall in the middle of the Syracuse zone, and the Orange had no answer for Duke's big freshman center.

Carey had 26 points and a season-high 17 rebounds for his 10th double-double of the season and the No. 9 Blue Devils beat the Orange 97-88 on Saturday night.

“He really went after rebounds,” Duke coach Mike Krzyzewski said. "In the zone, he made some moves against the zone that were spectacular. He played hungry, not that he hasn’t, but really, really hungry and we needed it. This is a big win for us.”

Carey had 14 points and nine rebounds in the decisive second half and finished the game 8 of 10 on free throws.

“Just being strong in the post and attacking the little space that we had in the zone, the guards attacked the zone and just dished it off to the bigs," Carey said. “We just finished through contact pretty well. It’s a big win with all the adversity that’s been happening.”

The Blue Devils had to play without assistant coach John Scheyer, who underwent surgery in mid-afternoon for appendicitis, and director basketball operations Nolan Smith didn’t make the trip, instead staying back in North Carolina to be with his sick infant daughter.

"I think the guys really wanted this for John,” Krzyzewski said.

It was a crucial game for Syracuse (13-9, 6-5), which had a five-game winning streak snapped on the road at Clemson on Tuesday night and needed a signature win to bolster its resume for consideration for the NCAA Tournament.

“We’ve just got to keep battling, just fight,” said the Orange's Elijah Hughes. "It’s going to be a dogfight the rest of the season with the big guys we've got in this league. We’ve just got to grind it out.”

“They kept their better defenders out there and they were just staying on us,” Buddy Boeheim said. "That’s what teams are doing more. There’s really no drive-and-kick options the way teams are playing us.”

Marek Dolezaj led Syracuse with 22 points. Hughes finished with 21 points on 6-of-19 shooting and was 1 of 9 from behind the arc.

Syracuse got within 71-61 on consecutive 3s by Joe Girard and Buddy Boeheim in a span of 16 seconds with just over eight minutes left as the raucous home crowd of 31,458 erupted, but Hurt followed with a 3 for Duke to keep the Blue Devils in front.

Syracuse closed within 79-74 on Bourama Sidibe's tip-in off a miss by Hughes with 3:11 to go, but Stanley converted a three-point play and Jones hit a pair of free throws to restore the double-digit lead.

“We fought hard. We missed 3s early, we need to make some,” Orange coach Jim Boeheim said. “We had some pretty good looks. We have to make some of those to compete."

Syracuse led the entire first half until the final minute, and two free throws by Hughes gave the Orange their biggest lead, 21-14, with 9:11 left. Buddy Boeheim and Hughes combined to shoot 1 for 9 from long range. The Orange finished the half 1 of 12 from behind the arc.

O’Connell's pass underneath to Javin DeLaurier for a lay-in tied it at 36 with 1:15 to go and O’Connell sank two free throws with 36.1 seconds left to give the Blue Devils their first lead. DeLaurier’s layup made it 40-36 at the break.

A moment of silence was observed before the game for Kobe Bryant after the former Los Angeles Lakers star and his 13-year-old daughter were among nine victims of a helicopter crash in the foggy hills above Calabasas, California, last Sunday.

Girard finished with 17 points, seven assists, one turnover and four steals for the Orange.

Duke freshman Wendell Moore Jr., who had missed the previous six games with a broken right hand, returned to the lineup. Before the injury, he was averaging 7.4 points and 3.9 rebounds and Duke had gone 4-2 during his absence. Moore, who suffered a broken fourth metacarpal at Miami on Jan. 4, finished with five points before fouling out in 23 minutes of action.

The first Carrier Dome crowd of the season to surpass 30,000 was already guaranteed at mid-week as ticket sales were approaching 31,000, the 84th time attendance has surpassed 30,000. A year ago the game between the rivals drew 35,642, which eclipsed by 196 the record for largest on-campus crowd in college basketball history the teams had set the previous time the Blue Devils were in town.

Duke: The Blue Devils have been in the top 10 for 37 consecutive weeks and will stay there. Five players in double figures is difficult to beat.

Syracuse: The Orange cannot afford to shoot poorly from behind the arc if they hope to make a late-season surge.

Duke: Blue Devils remain on the road with a game at Boston College on Tuesday night.

HIT: To some visitors from the other side of the globe being drawn to Auburn for its unique crow population.

An Auburn teenager played his electric guitar in front an announced crowd of 31,458 fans Saturday night.

Duke guard Tre Jones is defended by Syracuse forward Marek Dolezaj during the first half Saturday in Syracuse.

Syracuse guard Joseph Girard III reacts to the crowd during the first half.

Duke center Vernon Carey Jr. drives to the basket against Syracuse forward Bourama Sidibe, left, during the first half in Syracuse Saturday.

Syracuse guard Joseph Girard III wears sneakers in honor of the late Kobe Bryant before a game against Duke in Syracuse Saturday.