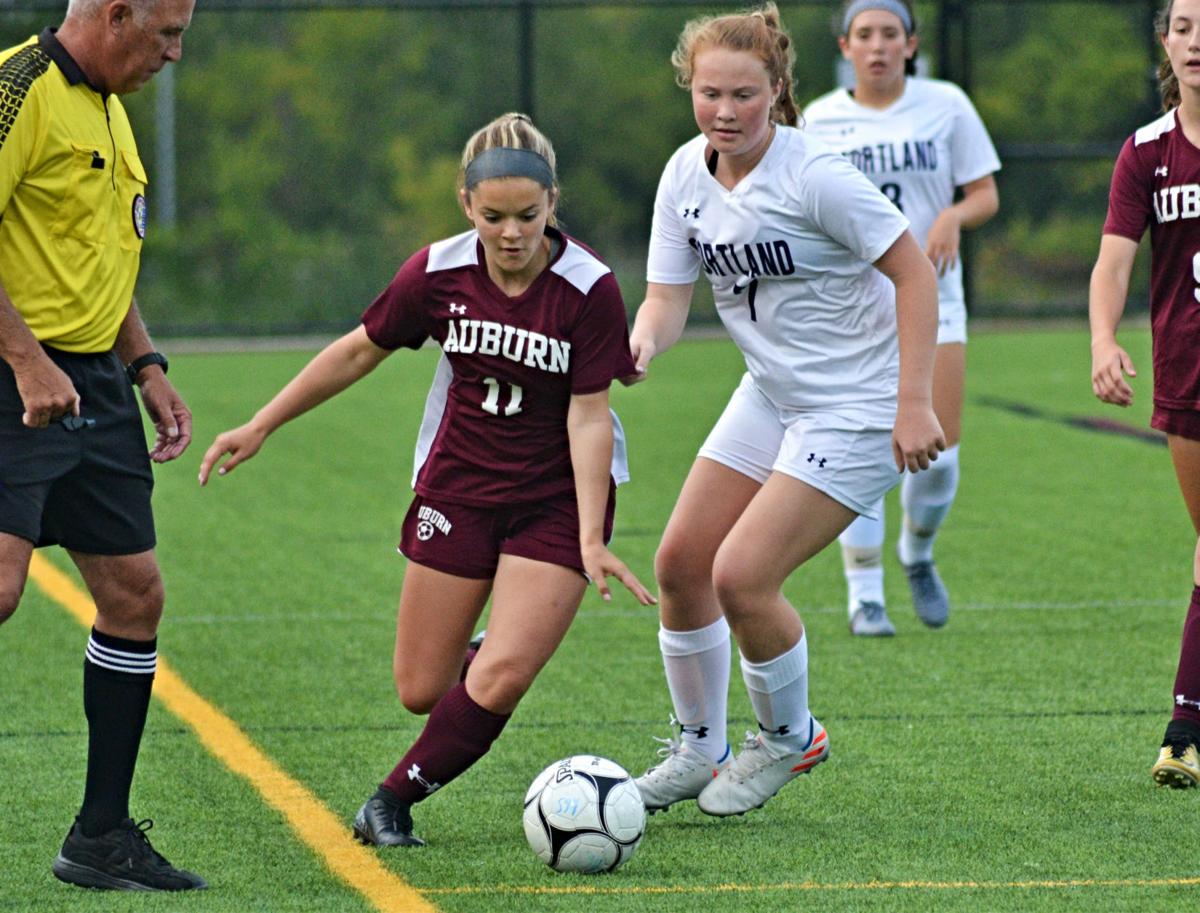 Auburn's Brooke Reynolds chases a ball down the sideline against Cortland Tuesday at Holland Stadium. 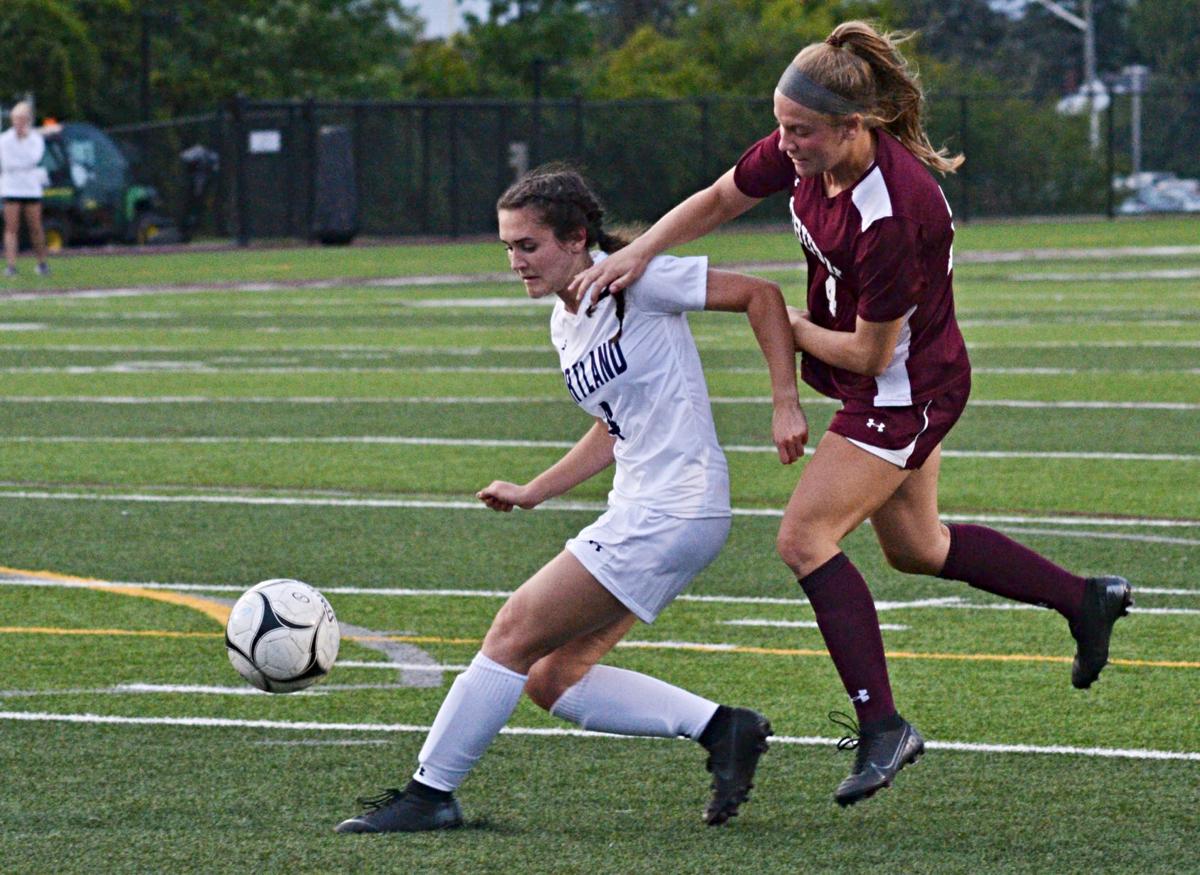 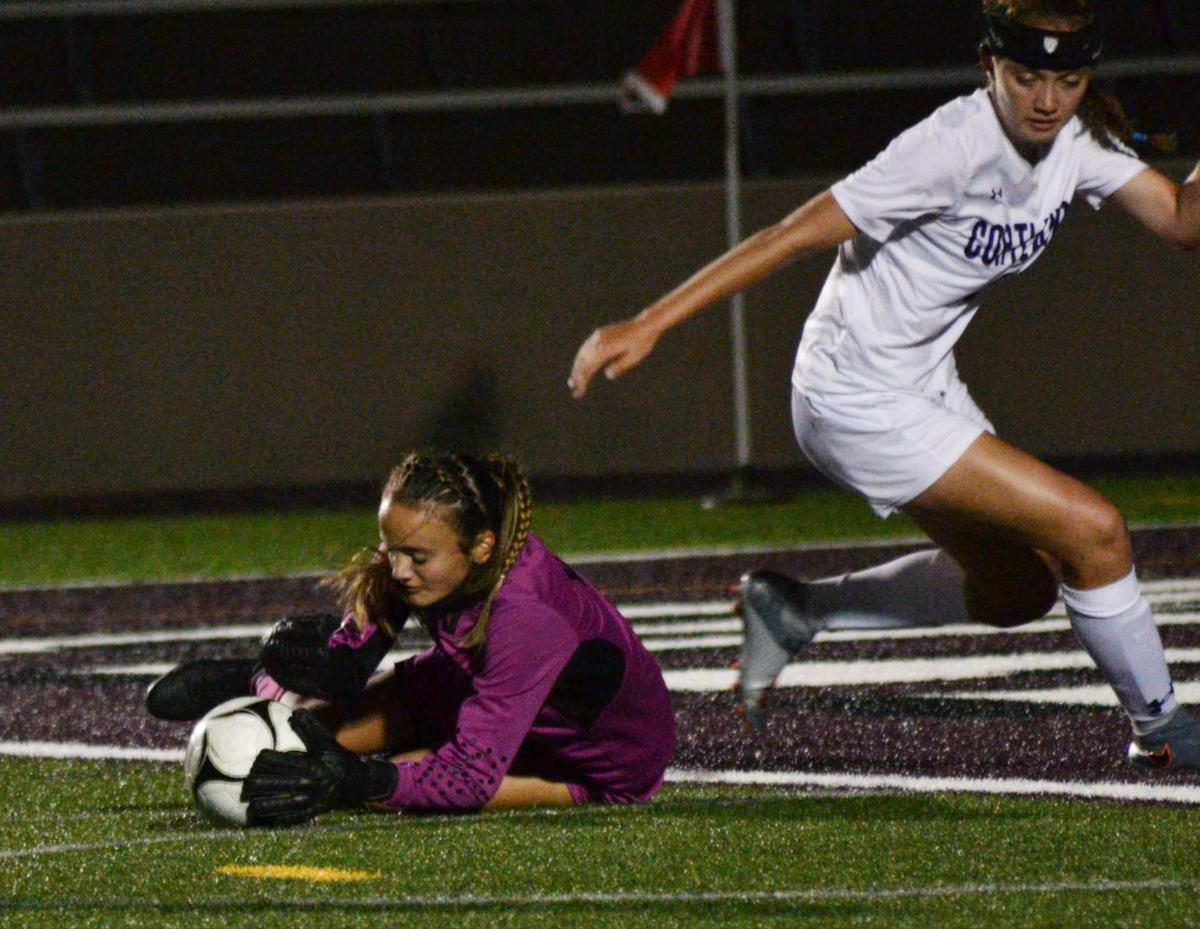 AUBURN — After narrowly missing sectionals last season, Auburn girls soccer has the look of a team that can compete, and beat, anybody.

The Maroons continued their solid start to the 2019 season with a 3-1 win over Cortland Tuesday at Holland Stadium behind a pair of goals from Amelia Bartolotta.

Bartolotta's goals came less than three minutes into the second half with Auburn already ahead 1-0. The junior midfielder was the beneficiary of a hustle play from Caitlin Lowe, who sent a crosser into the box that found its way to Bartolotta for the conversion.

"We just said (at halftime) that we've got to put the pedal to the metal and take it to them, do not back down," Auburn coach George Cosentino said. "One of our strengths in the first 20 minutes of the game was we were able to win balls and put pressure on them. Putting pressure on a good team and denying them opportunities, it takes them out of the game. We were good enough to capitalize on mistakes."

Sydney Marinelli was the Maroons' other scorer, beating Gilmore from 10 yards out after stealing the ball from a Cortland defender.

The win over Cortland, a section semifinalist in Class A last season, is a major one for the Maroons. Last year was an up-and-down year that ended prematurely when Auburn fell a win short of qualifying for sectionals.

While the Maroons only have three seniors on the roster, there are 11 juniors that are far more experienced after taking some lumps in 2018. To begin the season Auburn won back to back games to claim the Mexico Tournament, outscoring opponents 10-0 in those two contests.

"What I've seen this year as opposed to the past is I think you're starting to see our depth," Cosentino said. "Now that we're healthy, our depth has experience and we're able to play consistent throughout the game. Instead of just spurts, we're able to keep on rolling.

"Last year we had a lot of freshmen, a lot of sophomores. All those girls have now grown and they have a lot more experience."

Even with low levels of experience, Auburn didn't have trouble defending a year ago; offensively, it was a struggle at times. Against the Tigers, the Maroons showed solid ball skills and and the ability to finish, something that has eluded them in the past.

"I think we have a bunch of forwards who have the ability to attack the goal and finish this year," Cosentino said. "They're physically stronger so they're able to make plays. They're starting to see the runs and realize there's crucial times in the game when they have to make a play, and today you saw that happen."

Auburn (3-2) hopes to carry the momentum into its match-up with Oswego on Thursday. If the Maroons continue their current level of play, a sectional berth should be a formality.

"We should be competitive in all our games," Cosentino said. "I think this should be a big confidence booster moving forward. We lost to (Cortland) twice last year. We haven't beat them since I've been coaching. Moving forward, as long as they keep working hard this could be just the beginning for them."

High school baseball in the fall? Football in the spring? Under one scenario presented by New York state's COVID-19 task force, a change to the athletic calendar is possible.

Cayuga Community College will not have sports this fall, as the college suspends intercollegiate activity due to COVID-19 concerns.

The Bassmaster Elite Series event at Cayuga Lake, set for next week, has been canceled.

For Auburn native Tim Locastro and the rest of the Arizona Diamondbacks, the start of the shortened 60-game regular season will be on the road.

CHARLOTTE, N.C. — NASCAR will move its August road course race from Watkins Glen in upstate New York because of state health restrictions, and…

There will be no starting and finish line at Emerson Park this year, but Great Race competitors can now register to compete online.

Editors' note: Today's article is the seventh in a series of profiles of the 2020 inductees submitted by the Northeast Dirt Modified Hall of F…

Boeheim's Army kicks off TBT with victory in downsized tournament

Boeheim's Army is one of The Basketball Tournament's veteran teams, and the Syracuse alumni showed as much in the tournament opener Tuesday at…

Auburn's Brooke Reynolds chases a ball down the sideline against Cortland Tuesday at Holland Stadium.