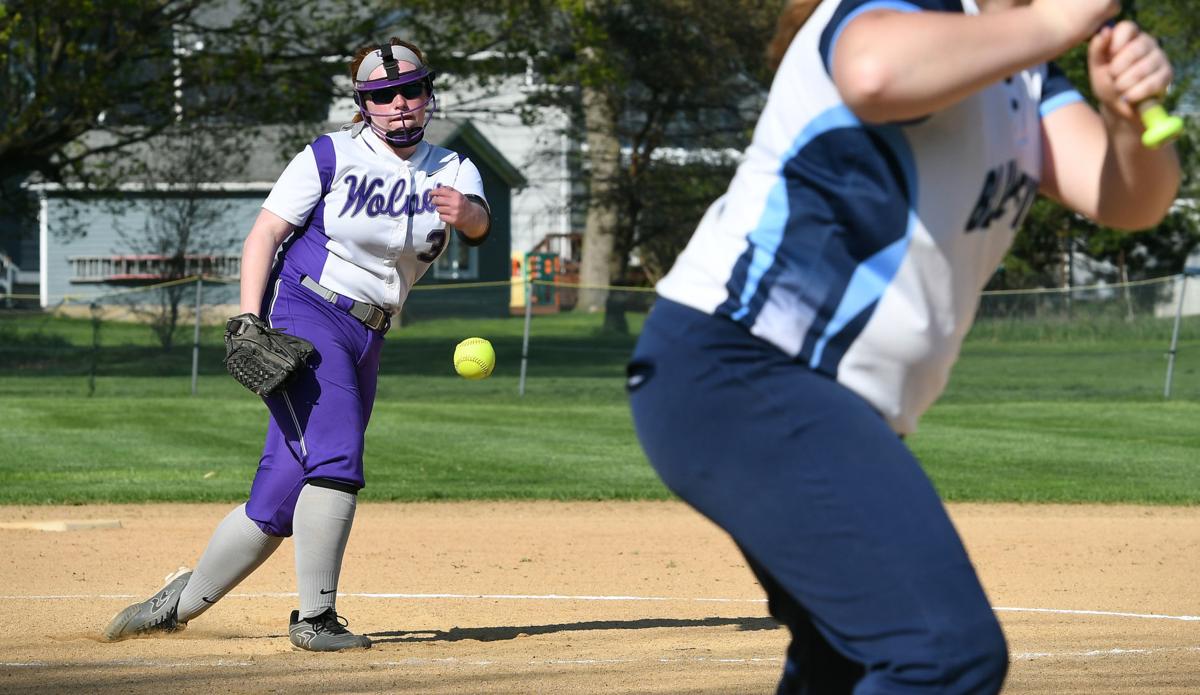 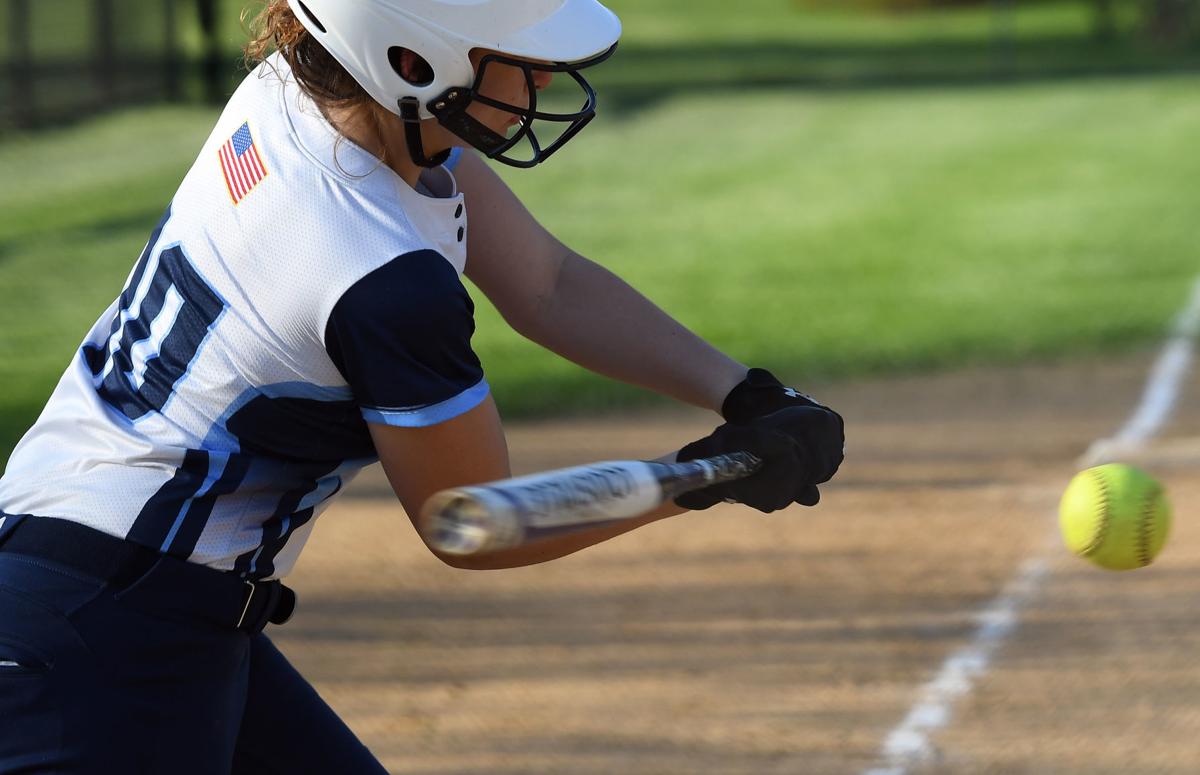 Moravia's Gabby Kehoe puts the bat on the ball for a base hit against Union Springs Tuesday at Moravia High School. 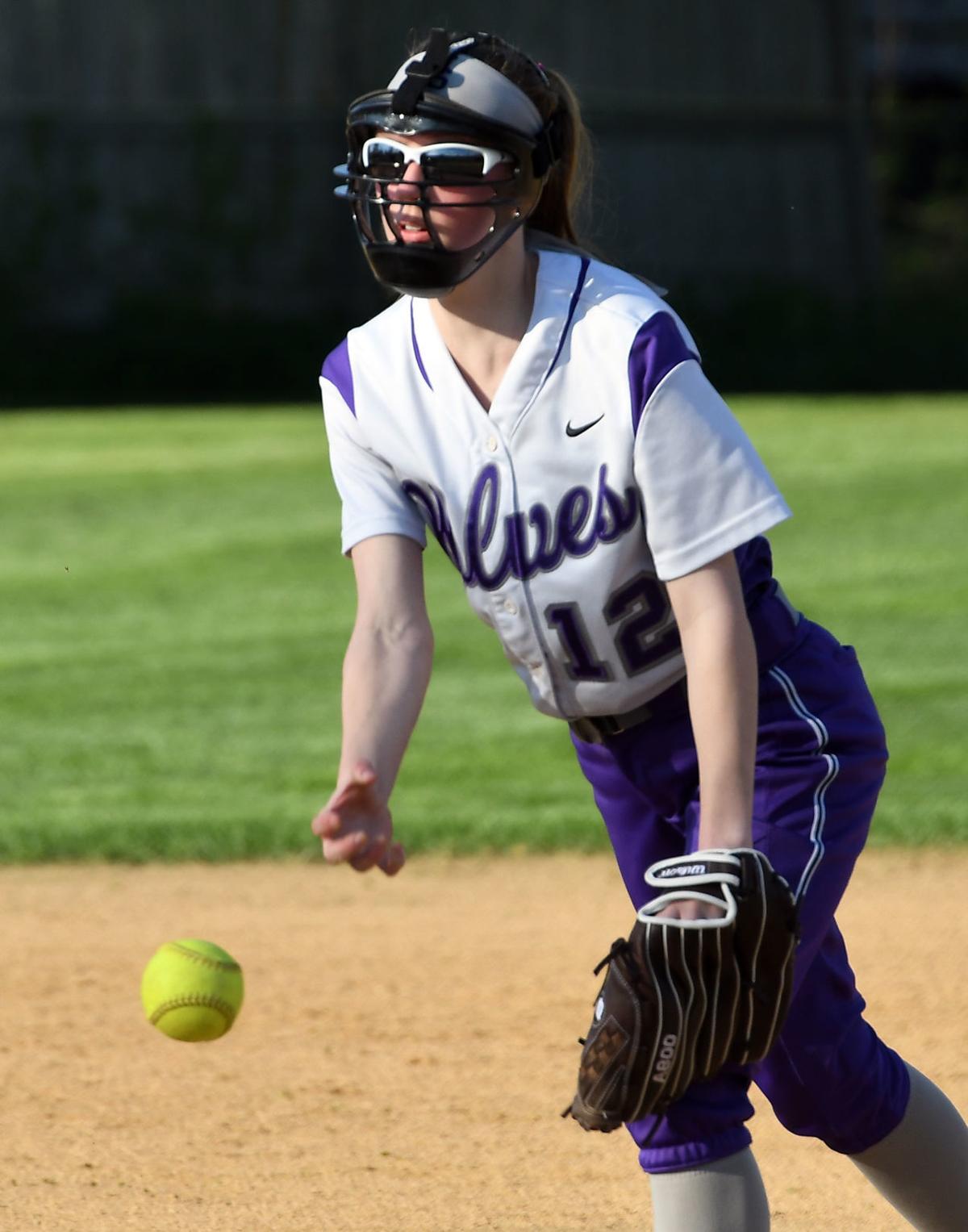 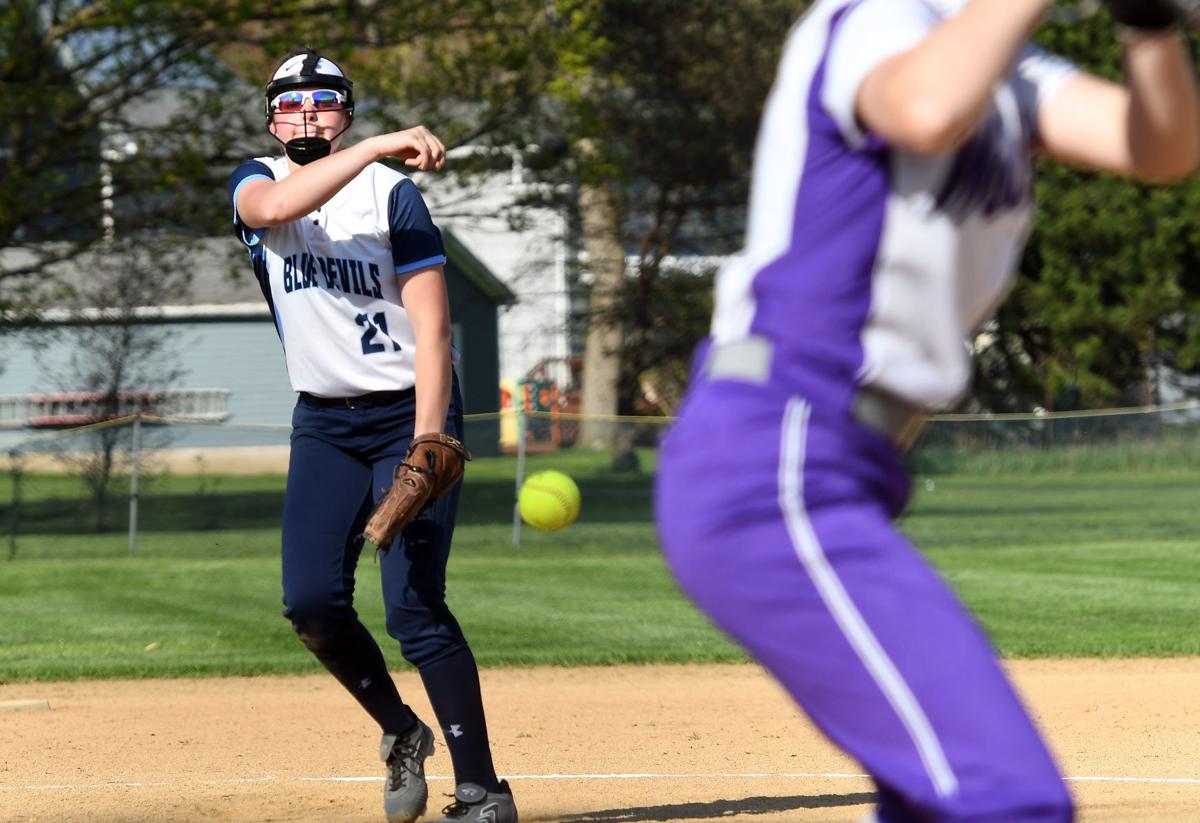 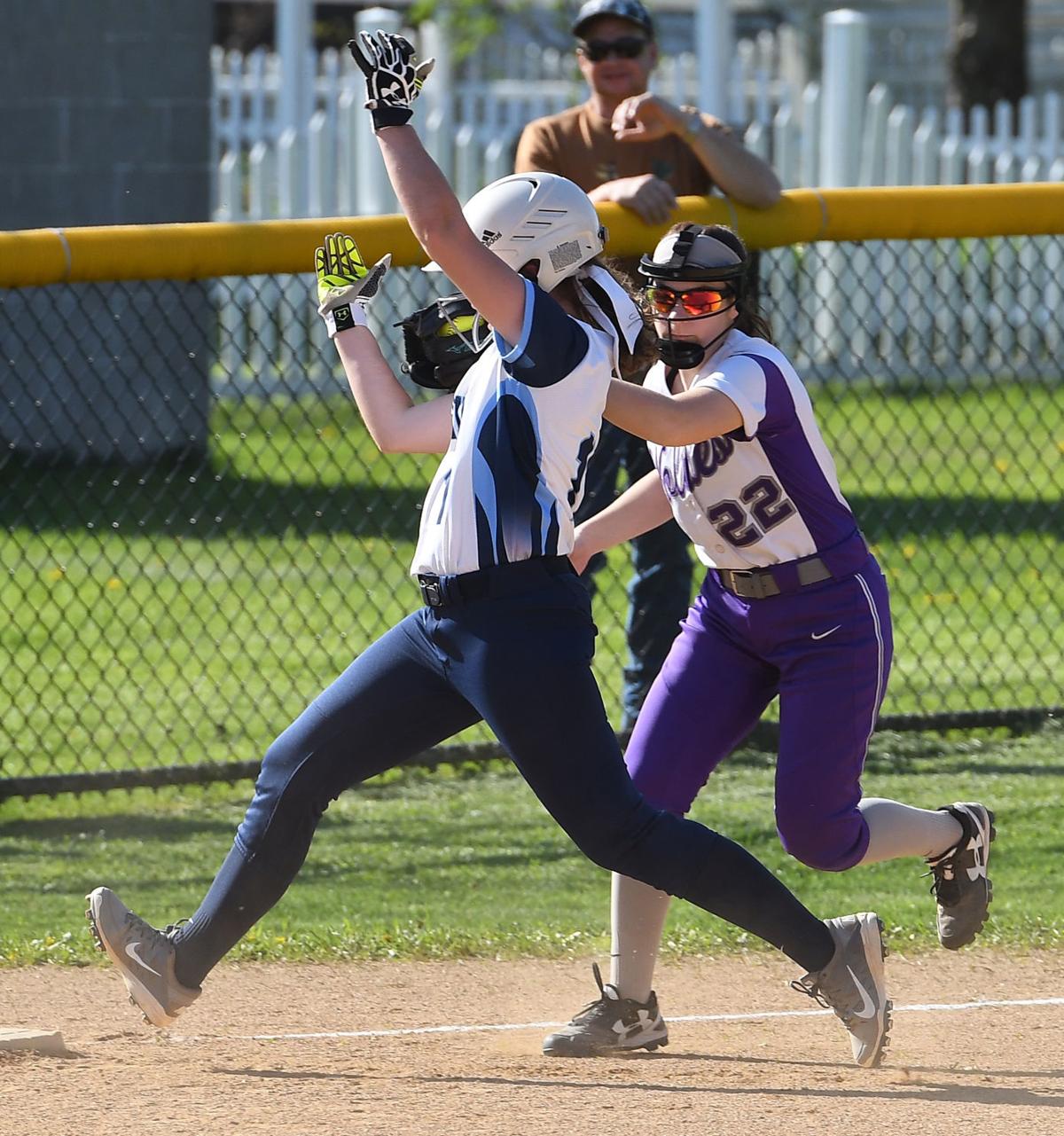 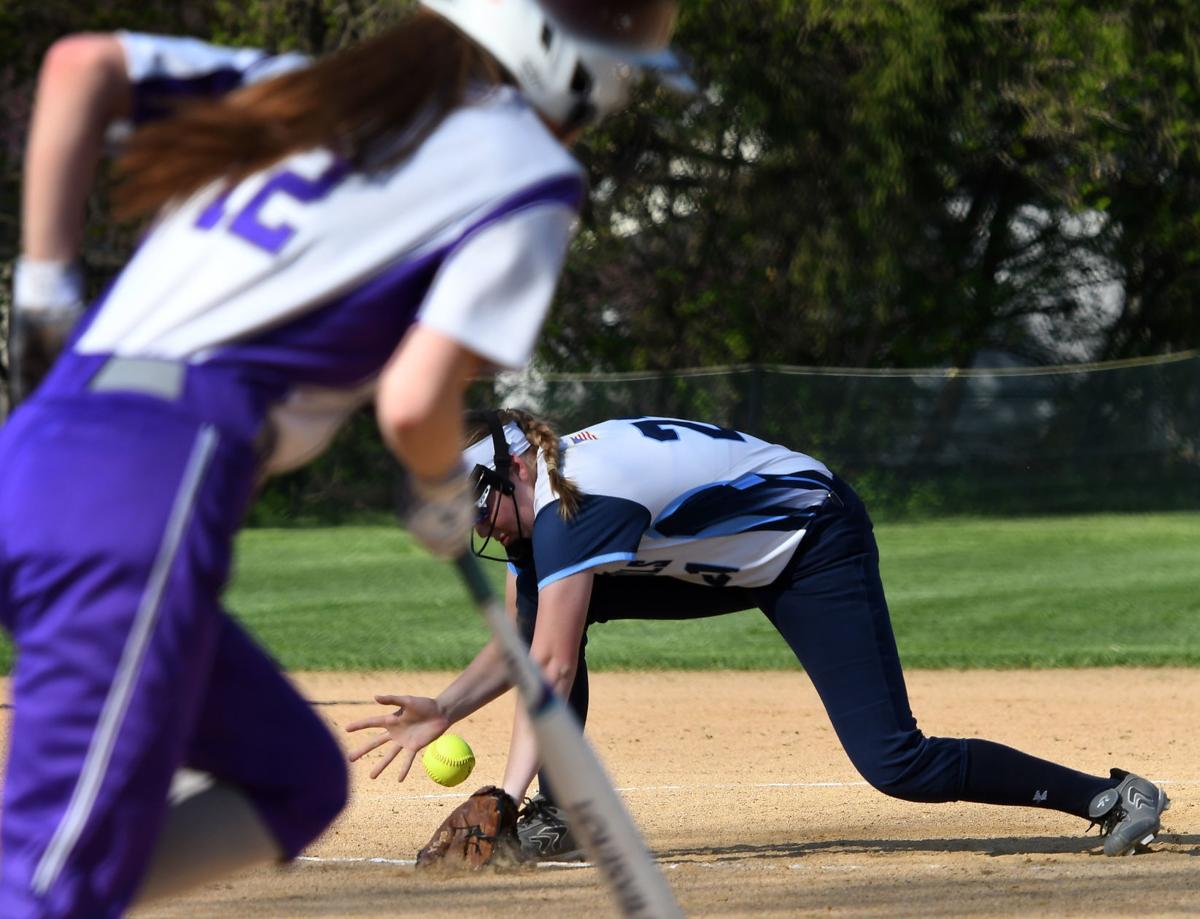 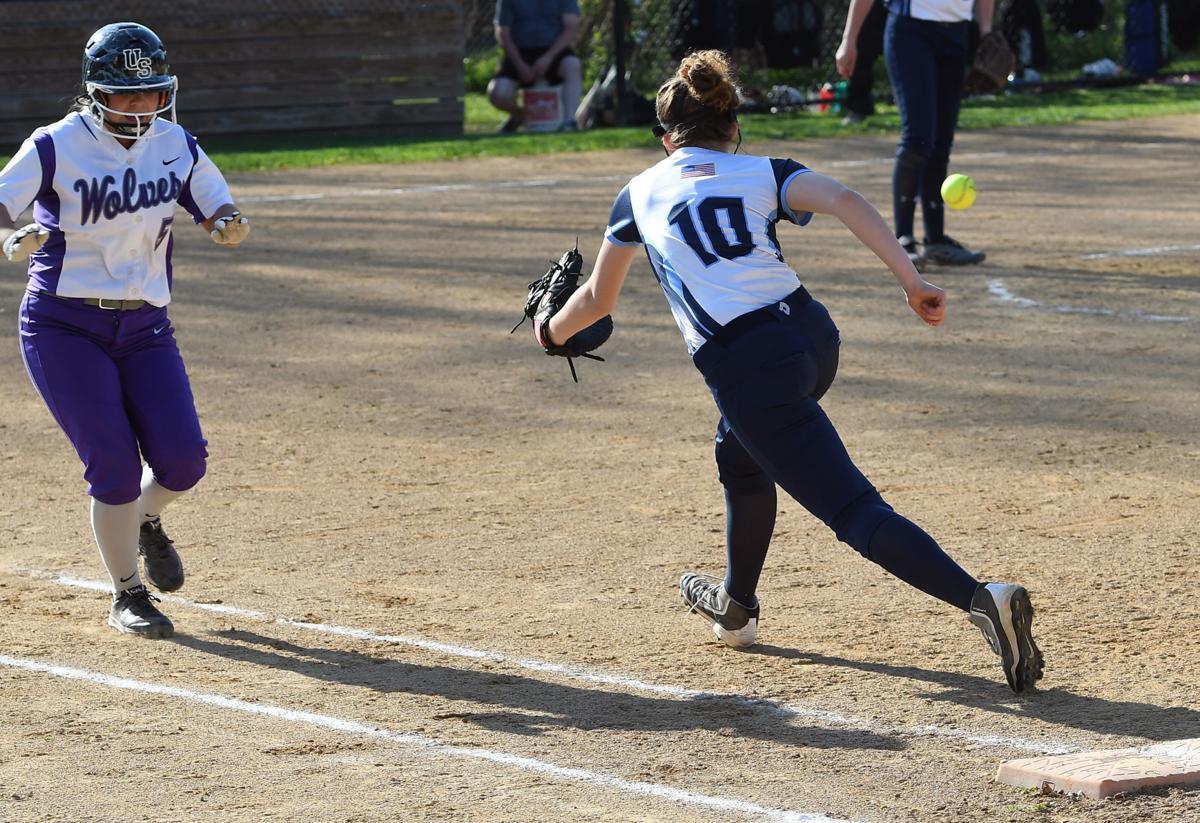 MORAVIA — Down by 10 runs after two innings, things looked bleak for the Wolves.

Union Springs softball chipped and chipped away though, and the sticktoitiveness paid off.

The Wolves, trailing 11-6 entering their final at-bats, scored five runs in the seventh to force extra innings and three in the eighth to stun Moravia 14-11 Tuesday at Moravia High School. Union Springs' comeback victory snaps a 10-game winning streak for the Blue Devils.

"I was proud of the way they hung in there," Union Springs coach James Bona said. "They didn't give up when we were down pretty big. It didn't look good in the first couple innings and we spotted them a few."

Down by five with three outs remaining, the Wolves led off the seventh with three straight singles. An error, fielder's choice, hit and sacrifice fly followed, scoring four of the needed five to extend the game.

With two outs, it was Telona White's RBI single that tied the score 11-11.

"Singles will get the job done," Bona said. "You get four base-runners on and all of a sudden here we go. One batter at a time, one run at a time, one out at a time. That seemed to work."

The Wolves rode that momentum into extras with, for the second consecutive inning, three singles to lead off. Kenedie Botindari, Brittany Waters and Grace Groesbeck each had RBIs to put Union Springs in front by three in the eighth.

Bailey Mudge, who entered the game in the seventh in relief, struck out three in seven at-bats to earn the win.

Union Springs' pitching had trouble finding the plate in the opening two innings — Moravia racked up 11 walks through two innings, backed by a pair of doubles and three hits overall, to go up 10-0 after the second inning.

"We've had a long week already and we were tired," Bona said. "We came in with our third string pitcher. We're like ... we'll just stay in the game with them, try to put the ball in play and force them to make mistakes.

"I said, 'We're not going to get them all back in one inning so we've got to chip away and stay calm.' We stayed clam and chipped away a little bit each inning after that."

The Blue Devils were held to one run the rest of the way, however, as Waters entered the game and held Moravia to four hits and one run with three Ks. With the pitching having settled in, Union Springs bounced back with three runs in the third, two in the fourth and one in the fifth to cut its deficit to 11-6.

The Wolves sent 10 batters to the plate in their five-run seventh to tie the game and six more in the eighth to take the lead.

No comeback would've been possible without the efforts of relievers Waters and Mudge. Mudge, the Wolves' ace, was unavailable to start after pitching a doubleheader Monday but came in after some strong innings from Waters to shut the door.

"I was doing my best to try and mix in our No. 2 and No. 3 pitchers, and No. 2 (Waters) came in and we rallied around that," Bona said. "Bailey did a nice job of coming in and closing the game."

Union Springs wraps up the season with Dryden Wednesday and Elmira Notre Dame Thursday. Moravia tries to return to the win column Wednesday against Southern Cayuga.

After a busy weekend of match play, The Citizen Masters bowling tournaments are down to their final eight competitors.

Fausto Segura, a Washington Nationals pitching prospect who last played for the Auburn Doubledays during the 2019 season, died in a motorcycle…

Last weekend, the Auburn Ice Hawks 8U mites hockey team won its third tournament of the season, capturing the championship of the Southern Tie…

Buffalo Bills, officiating and moving on

Nearly a week after the Buffalo Bills blew a 16-point lead and lost a playoff game, some fans are still upset. A good chunk of Bills Mafia tha…

After two weekends packed with matches and qualifying games, The Citizen Masters Open Bowling Tournament is down to the final eight competitors.

The field in the The Citizen Masters Women's Bowling Tournament has been cut in half, and by the end of the upcoming weekend, one person will …

Moravia's Gabby Kehoe puts the bat on the ball for a base hit against Union Springs Tuesday at Moravia High School.