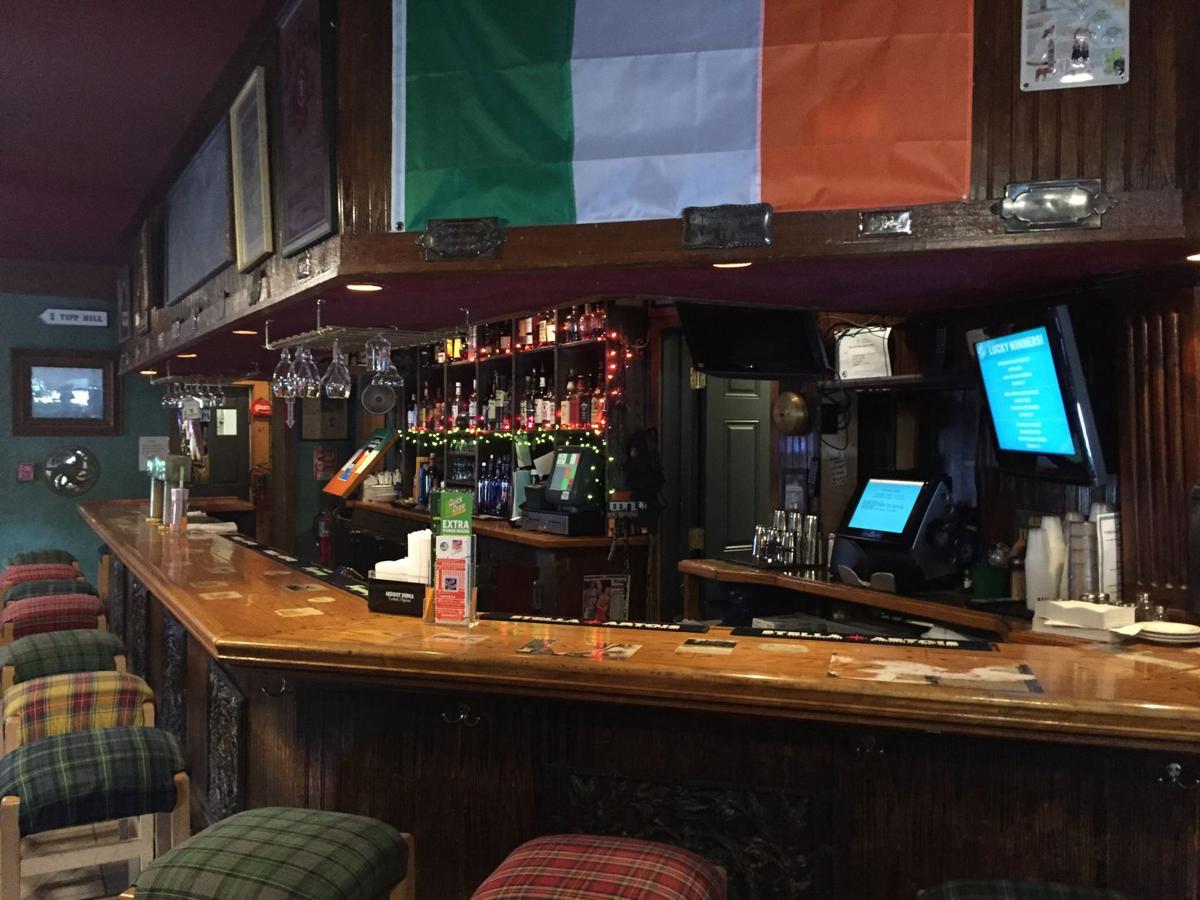 At the bar at the Wayside Irish Pub in Elbridge, the spirits may not just come in bottles. 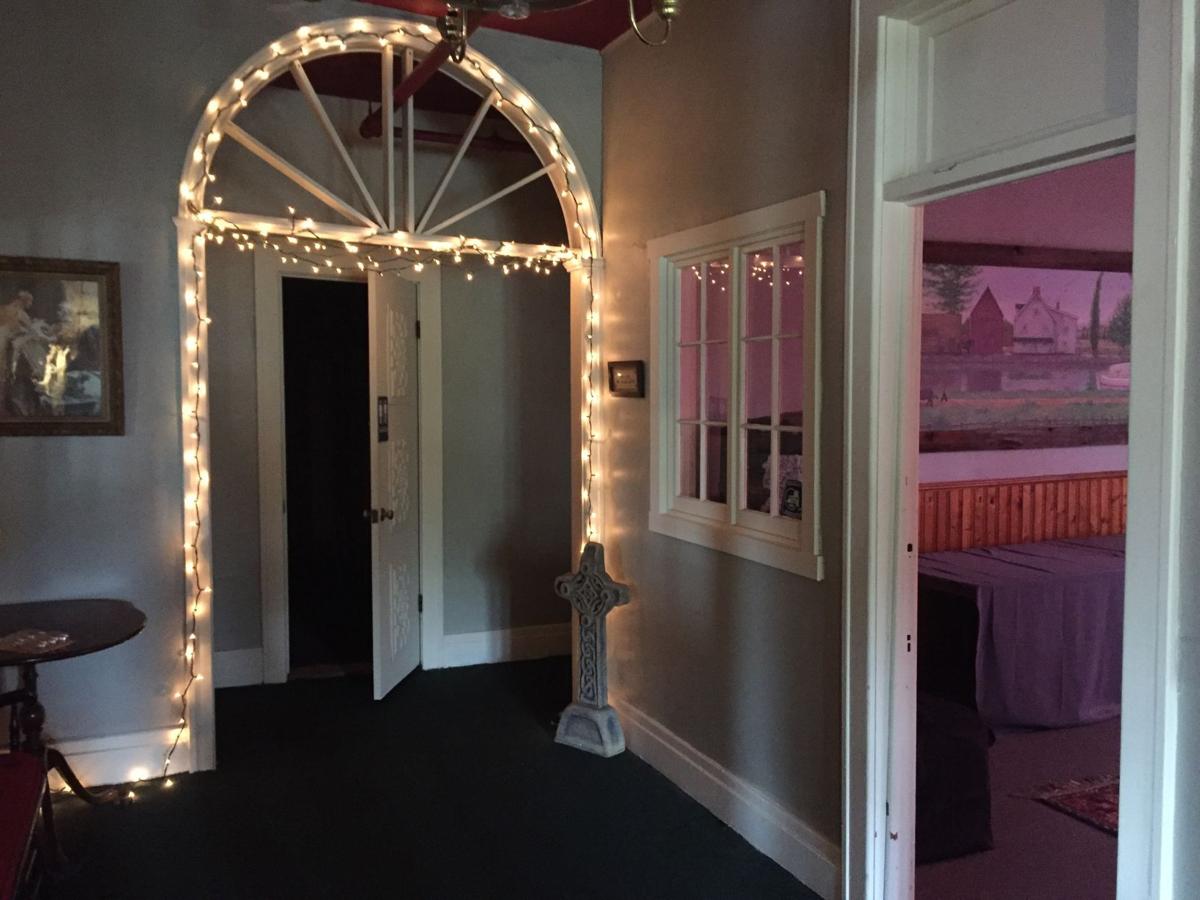 The second floor at the top of the stairs at the Wayside Irish Pub in Elbridge is a hotspot for paranormal activity.

ELBRIDGE — Patrons who come to the Wayside Irish Pub in Elbridge to let their hair down might find their hair being tugged and learn that the spirits aren't just in the bottles at this nearly 200-year-old establishment.

Labeled the most haunted restaurant in New York state, the establishment has been visited over the years by paranormal investigators and psychic mediums trying to connect with the not-so-living patrons who live there.

And, regular patrons can do the same next month when the Wayside hosts its first-ever paranormal dinner on the second floor, where the owners say most of the paranormal activity takes place.

"When we first came in, I knew right from the get-go that it had the reputation for being haunted," said Margo Spain, who has owned the Wayside for about 10 years with her husband, Roger. "I had never had anything happen to me visiting here before I owned it."

She has then, however, but Roger remained a skeptic until he had his first ghost experience a couple of months ago.

"He was a skeptic the whole time," Spain said. "He's totally convinced now, and he's apologizing to everybody up and down saying, 'I apologize. Now I get it.' Once you have it happen to you, it opens the door and it opens your mind to it."

Those who attend the paranormal dinners — slated to take place Friday, Oct. 21 and Saturday, Oct. 22 and hosted by Deanna Germano's Chef 4 Rent catering company — will have the chance to have their minds opened in much the same way.

Spain said the Wayside and Chef 4 Rent recently combined forces to offer both private parties onsite and catered events offsite through Germano. With the Wayside wanting to take advantage of its ghostly notoriety, a paranormal dinner seemed perfect for the pub and its catering arm.

"The first dinner sold out in four hours without being advertised," Spain said, noting German put the event on her Facebook page and it immediately caught attention. "So, we had to add a second night on, and that's getting pretty full."

Along with the dinner on the second floor, Spain said the event will feature a psychic medium, a ghost whisperer, tarot card reader, palm reader and a numerologist.

Most of the investigators who visit Wayside, she said, come to the same conclusion: More than one ghost inhabits the pub — a female, a male and possibly a child, along with some poltergeist activity.

The male ghost, she said, appears to be a soldier who walked barefoot west from Syracuse along a wooden turnpike road — what is now Route 5 — and stopped at what was then the Munro House to get a horse from the livery stables there. Somehow, the man died at the bar that night.

"They (investigators) don't know if he was shot in the back, but body not to be found, nothing written in the history," Spain said. "They say that perhaps he's down in the well. We've had a lot of people say that something — a very heavy spirit — is down in the well."

Spain may have had an encounter with the soldier one time on a Sunday when she was doing paperwork in the basement before opening. She heard a blast at the bar, then screaming and deep voices yelling, "Help! Help them!"

A retired emergency room nurse, she immediately thought somebody was in full cardiac arrested and prepared to call 911 and give CPR. But, when she got up to the bar, she found nothing there.

"The paranormal people say that is a recurring of the episode that happened with the soldier," she said. "That's why they think that he was shot because they think there was a shooting at the bar in the 1840s."

Kelly Barnes, Spain's niece who worked as a bartender at Wayside for four years, said patrons and her fellow bartenders experience poking and hair pulling.

In fact, Spain said she started a ghost haunting log so that customers and employees alike could keep track of their experiences at the pub.

She said she was closing the pub with another bartender one night down to the basement finishing up their duties. They thought the building was completely empty, as they always lock all the doors before they start closing.

"We heard footsteps. It was like there was someone in the building," she said. "We thought we were either going to be robbed, or we thought there was somebody we missed."

Barnes called Roger and kept 911 at the ready, yet they checked everywhere — every door was locked and no one else was around.

"There's nothing bad here," Spain said. "I just leave them alone, and they leave me alone. One time, I had something thrown at me upstairs, and that was a little scary."

Aside from the ghosts, Wayside has a steady clientele of people from Elbridge and the surrounding areas and has been a community gathering place for almost two centuries.

"If you've grown up in Elbridge and you moved away and you come back, this is where you come to see your friends," Spain said. "It's like a Cheers bar. Everybody knows your name."

"It's just a fun place to be if you want to come to an environment where people are friendly and laidback and have a pint," Barnes said. "It's certainly a nice place to do that."

Both women said a popular time for people to come to the pub is after a wake or funeral — and those occasions seem to bring out the kinetic energy of the place, Spain said.

"If you have somebody that has passed away in your family, and there being a wake down the street, the whole wake ends up here," she said. "The lights flicker. Pictures go off the wall. If there's a lot of emotion, people crying or laughing or talking or reminiscing about the one that has passed on, you see all the lights flash. That's pretty common. I don't know if they're stopping on their way up or their way down."

At the bar at the Wayside Irish Pub in Elbridge, the spirits may not just come in bottles.

The second floor at the top of the stairs at the Wayside Irish Pub in Elbridge is a hotspot for paranormal activity.

Save
© Copyright 2021 The Citizen, a division of Lee Publications, Inc., 25 Dill Street Auburn,NY | Terms of Use | Privacy Policy | Do Not Sell My Info
Powered by BLOX Content Management System from TownNews.com.
You don't have any notifications.